The road to Manderley lay ahead. There was no moon. The sky above our heads was inky black. But the sky on the horizon was not dark at all. It was shot with crimson, like a splash of blood. And the ashes blew towards us with the salt wind from the sea.

And then Snidely Whiplash tied me to a barrel marked TNT, Daphne Du Maurier didn’t say, on the last page of Rebecca. She probably would have, if she’d thought of it, but I bet it didn’t even occur to her. I guess some people know how to write exciting conclusions and some people don’t, and that’s all there is to it.

It’s Graduation Day in this strange desert otherworld of Parallel Time, and they’re heading towards one of those “tragically ever after” endings that they have in post-apocalypse movies and most Doctor Who stories, where it’s great that the villains are defeated, especially if you happen to be one of the three people left alive in the universe.

Quentin Collins has been exonerated of all murder charges, because the police did an autopsy on Alexis’ corpse and discovered somehow that she was actually her twin sister Angelique, which means that she killed all the people that Quentin’s accused of killing, including herself. I guess in Parallel Time, they’re still having post-mortem witch trials conducted on the honor system; Julia just talks to the authorities and explains this inexplicable series of events, and then everything’s fine. If forensics has a hard time figuring out what Dameon Edwards had to do with anything, then that is entirely their problem. 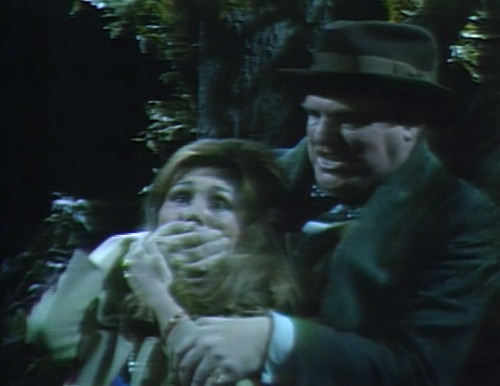 So Quentin’s getting out of jail, and then he’s going to sell Collinwood to Kirk Kekorian, so MGM can turn it into the world’s largest parallel hotel. Then presumably he’ll run off with Maggie and do whatever they would have been doing if they weren’t being haunted, which is anybody’s guess. Angelique liked gardening, Stokes collected stuffed cockatoos, and Bruno played the piano and got recreationally choked by people, but nobody bothered to provide Maggie and Quentin with any non-story-related characteristics. They’ll probably just go on accusing each other of things; it’s all they know.

But along comes Mustache Stokes, the meanest Stokes of all. He’s mad at the world for various reasons that I am no longer responsible for explaining, and he’s decided that if he has to go down, he’s going down swinging.

He runs across Maggie in the woods like the Big Bad Wolf, which is super convenient, because she’s the very person he was hoping to threaten. “It’s no use resisting!” he says, clamping his hand over her mouth. “You’re coming with me, and don’t try to scream or you’ll be very sorry!” Then he lets her go, and she just stands there and talks to him.

He asks where Quentin is, and when she hesitates, he barks, “Just answer the question, you’ll find I’m very easiliy provoked!” And then she answers, because who wants to provoke people.

They stand there chatting for thirty seconds, before he grabs her wrist and drags her away. “No! Let me go!” she says, failing to struggle. She’s younger and faster than he is, but somehow he manages to overpower her, through sheer animal magnetism. 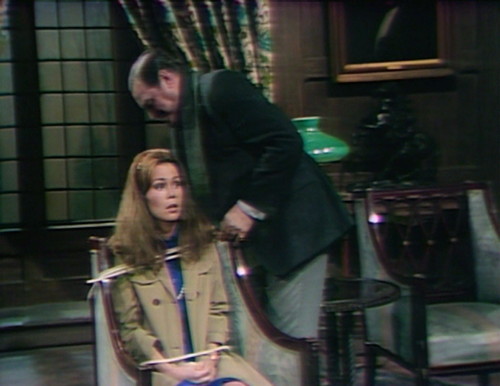 And then he drags her to Collinwood and ties her to a chair, as she sits quietly and waits until he’s finished. I’m not even sure you can tie a person to a chair the way he’s doing it — surely, she could just stand up and take the chair with her, problem solved — but there she is, folding her hands in her lap and waiting to see where he’s going with this.

He does have a gun, as it happens, which he displays with a lunatic grin on request, but he hasn’t been holding Maggie at gunpoint all this time. You can point a gun at somebody, or you can ineffectually tie them to a comfortable chair, but, in my experience, you can’t do both. If it helps, we could have one time band where Stokes points a gun at her, and another time band where he ties her to a chair, but it’s a bit late in the game to establish further time iterations.

By the way, is anybody else as tired of the pink-and-orange flowers as I am? Oh my god, enough already.

The problem, obviously, is that they killed the actual villain at the top of Monday’s episode, and here we are all the way into Friday, and the characters haven’t had much of a challenge to react to except time and basements and ennui, so at the last minute, they’re turning the mad, fat old alcoholic that they have on hand into a Batman villain.

Stokes calls Quentin at the Old House and tells him to come over to Collinwood alone and unarmed, and Quentin does, but Stokes still isn’t happy. There’s no pleasing some people. So he stands around and monologues like the madman he is.

“I intend to finish what Angelique started!” Stokes says, and doesn’t shoot Quentin.

Quentin asks what Stokes is talking about, and Stokes explains, “She was determined to resume her rightful place here again, as mistress of Collinwood.” And then he still doesn’t shoot Quentin.

“Unfortunately, now it’s not possible for her to be here with you,” Stokes adds, not shooting Quentin, “but it’s quite possible for you to be with her.” At this juncture, he does not shoot Quentin.

“Quentin, he’s going to kill you!” says Maggie, although I can’t imagine where she got that idea.

“I have nothing to lose!” Stokes announces merrily. “And very little to gain, except the satisfaction of seeing you dead. They say a man’s life is judged by his achievements! My crowning achievement was the restoration of Angelique, and you destroyed it! I live now, Quentin, only to see you die!” He’s apparently waiting for him to die of old age.

But then there’s a display of television judo, the ancient martial art of distracting somebody and then tapping them on the wrist, to make them drop their gun and then stand around looking stunned, while the hero picks it up and saves the day.

“There has been enough killing, Stokes!” Barnabas cries as he steps out from behind the drapes, which is one of those great moments in ta-dah!

How long do you think he’s been hiding back there? It’s adorable. 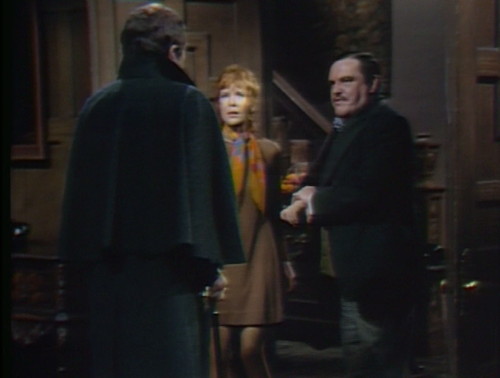 And then, for no reason at all, Roxanne walks into the room and stands right next to Stokes, staring blankly at Barnabas.

But there is a reason, which is that it puts her neck within grabbing range.

“One twist!” Stokes proclaims. “One little twist, Barnabas, and I can break her neck, so — stay where you are!” And she just kind of yelps piteously as he closes and somehow locks the drawing room doors from the outside.

So this episode has kind of a problem with women, is what I’m saying. We’re clearly abiding by adventure-story rules today, rather than soap-opera rules.

On a soap opera, the women are the central characters — they make all the big decisions, and everybody gets as much time to talk about their feelings as they want. In an adventure story, the central guy is the hero — they get all the action, and the women are basically props. In fact, right now Quentin and Barnabas are both being the hero, so they had to team up to distract Stokes and get the gun. 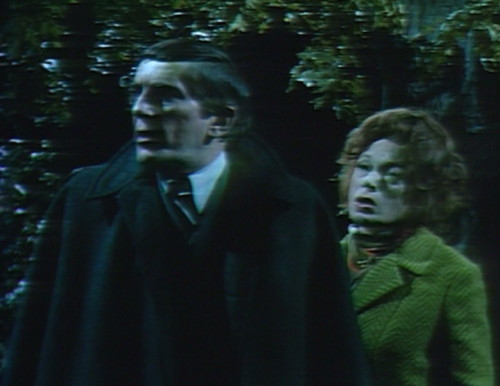 Then it’s Quentin’s job to get Maggie to safety, while Barnabas picks up Julia in the woods. Julia’s a wild card in this construction — neither the action hero nor the imperiled ingenue — so they have to do an extra little scene to get her involved with the search for Roxanne. Ordinarily, Julia would be the one driving, but today is not a good day for the females. 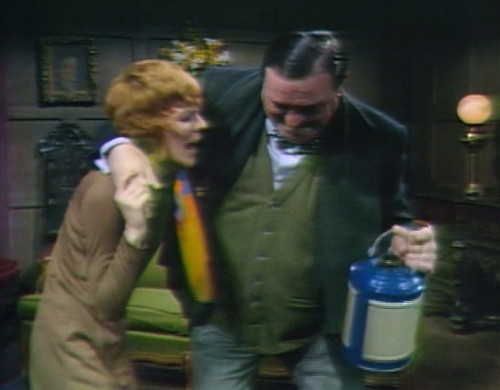 So here’s Roxanne, held vaguely under Stokes’ arm, not really trying to break free in any noticeable way. He’s picked up a gas can somehow, so I guess he led Roxanne all the way to the garage and back. Say what you like about Stokes, he does seem to have a knack for attracting and retaining captives. 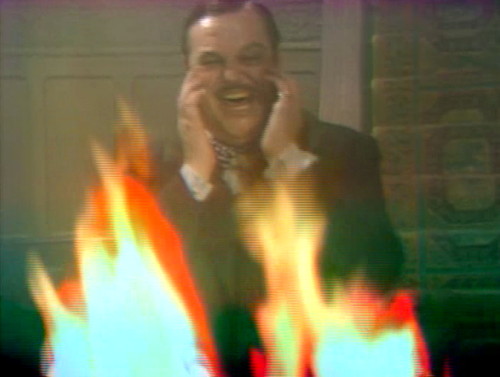 So it’s not Mrs. Danvers who destroys Manderley after all, because women can’t seem to do anything of consequence today. The culprit is Emperor Nero Wolfe, who fiddles while Rome burns. And our heroes race for the fire exit, back to their own band of time, which is exactly like this one, except that people have made different choices. I wonder what that feels like.

Monday: I’ll Be There For You.

There is something distracting at the back of Maggie’s hair, starting with the scene where Stokes ties her to a chair. It could be connected to the hairband she has on, but I don’t think so. You get a good look at it after Quentin unties her, but I can’t identify it.

There’s a little edit during Quentin’s conversation with Stokes, which skips to mid-sentence.

In act 4, we can still hear Stokes laughing in the foyer after the scene shifts to Angelique’s room.

What is that map hanging up behind Julia at the police station? Do the police in Parallel Collinsport have jurisdiction in the South Pacific?

Monday: I’ll Be There For You.