“I can feel neither love nor hate. I feel nothing now.”

Last week, Barnabas was planning to kill his fiancee, Josette, and turn her into a vampire. Instead, she fled from him, and jumped off the cliff at Widow’s Hill to a messy death on the rocks below. Not satisfied with that level of carnage, Barnabas came up with a whole new plan yesterday — he’s going to use his powers to call Josette back from the grave.

“I have made my own dark conquest of the grave,” he said. “Hers will be next.”

Now, I know the show is called Dark Shadows, but they’re really taking that super seriously at this point. The main character has been moping around in a graveyard for weeks, and I don’t see the situation getting a hell of a lot happier. I mean, at a certain point, either your show is going to do a two-part episode at Disney World or it’s not. 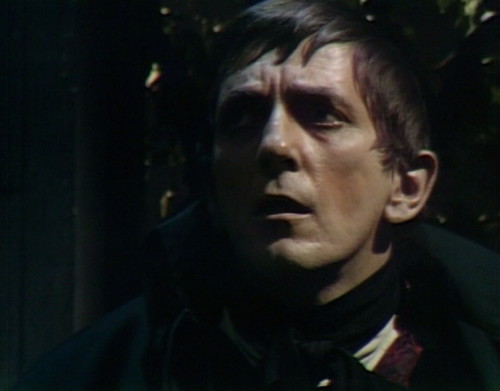 So here’s Barnabas, pacing around the mausoleum, doing a moody monologue in thinks.

Barnabas (thinks):  Josette… Why did you choose to die hating me? Do you hate me still? You cannot… I refuse to believe you do.

Man, talk about not taking the hint. She threw herself off a tourist attraction, dude. That is a “lose my number” move if I ever saw one.

By the time Ben arrives for their daily stand-up meeting, Barnabas is sitting on his sister’s coffin like he’s the saddest little vampire in the world.

But Barnabas has his plan all figured out.

Barnabas:  I will call to her, I will tell her how much I need her… and perhaps she will hear me and return to me.

Ben:  What are you talking about?

Yeah, good question. Is everyone clear on the definition of “death”? Because it seems like the show has its own take on what being dead is about.

Barnabas insists, “I refuse to believe that she is gone forever! If I have the power to call her back from the dead, I will.”

Now, as childish as that sounds, the idea that you could call a dead person back to life does make sense to us. No matter how grown-up you get, everybody knows deep down that dead people are still “in there” somewhere, still inhabiting that body. That’s why we have funerals, and make a big deal about laying someone to rest in their grave.

I mean, if you think about it for a minute in the most cynical possible way, the idea of laying a corpse down in the ground and then tiptoeing quietly away is deeply strange. They’re not in there. They’re not going to be any more or less “at peace”, no matter what you do, even if you shook them upside down by their ankles. What happens to the body isn’t really relevant anymore.

But we can’t think of it that way; that line of thinking is just horrible and inhuman. We care about people, and that doesn’t instantly drain away as soon as their heart stops beating. There’s always going to be a child inside of us, who thinks that death is just a deeper form of sleep, and maybe if you shake the person really hard they’ll wake up.

So here’s Barnabas, the eternal child, planning to shake Josette back to life. But he’s not really doing it for her sake; as usual, it’s all about him.

He wails, “I won’t lose her, I can’t!” And as far as he’s concerned, that’s all he needs. His love has the strength to violate all the laws of nature, and drag her back from across the veil. He’s actually planning to wish her back to life.

Ben, bless his heart, thinks he’s going to talk Barnabas out of doing something foolish.

Ben:  You don’t have the power to call anybody back from the dead!

Barnabas:  She was frightened! She didn’t know what she was doing.

Ben:  You told me the way she looked at you right before she died.

Barnabas:  I don’t care what I told you!

Ben:  You told me she looked at you like she hated you!

Barnabas:  Stop it! Josette does not hate me! She couldn’t!

Barnabas:  No! Leave me alone!

Ben:  Let her spirit rest! For her sake, and for yours.

Barnabas:  If you say one more word, I WILL KILL YOU, I swear it!

So that’s a hard stop on the discussion salon. Ben walks back to the house, muttering, Okay, fine. Knock yourself out. Just let me know where to forward your mail.

And then we hear the sound of a woman, softly crying. He actually did it. He should try this technique the next time he goes fishing — just put his hook in the water for five seconds, and see what jumps into the boat.

He’s thrilled, obviously. Heart-crushing sobs is apparently what he was going for.

Barnabas:  Josette — you can hear me! Listen to me. I love you… I need you! You must return to me. You must!

The sobbing gets louder, and louder. The crying woman is clearly in agony. It’s actually a difficult sound to listen to, even if you remind yourself it’s just a TV show. It’s horrible.

Barnabas looks around, some lightning flashes, and the crying just gets louder and more strained. And then they break for a commercial. I guess this qualifies as an act break now — no musical sting or anything, just the awful sound of a helpless woman in terrible pain.

And then there’s commercials for Pepsi-Cola, Purina dog food and Clairol shampoo. How did they get away with this?

Okay, back to the show, with a spiritual question — what is actually going on here? Why is being dead like this?

Barnabas:  Josette… why are you crying?

Barnabas:  Why do you say that?

… you must not disturb my rest …

And that’s it, the only explanation we get for where Josette’s spirit has been, and what she expects. It turns out the crazy old Caretaker was right. The dead must rest.

And “rest”, as far as we can tell, is just a cessation of feeling. Josette has two options — not feeling anything at all, or the horror of being pulled violently back into a world of unending pain.

There’s no sense that Josette has gone to her final reward. Both Josette and Jeremiah’s spirits are still close enough to ground level that you can just reach out your hand and pull them back. Is there a Heaven that they’ve been denied? Or is there really only silence?

Barnabas is drawing on the powers of darkness here, but there don’t appear to be any powers of light. As far as we can tell, in the world of Dark Shadows, if you peel back a layer of reality and look under the hood, there’s only darkness. God, if there is one, is out of reach.

Barnabas:  My dearest Josette — why do you cry?

Barnabas:  I cannot let you go!

Barnabas:  I will not believe that… nothing can separate us, even death! Nothing can change our love for each other! It spans all time and space!

He’s just not a good listener, I think. This is not a new problem.

Anyway, he finally gives her a little space. He tells her he’s going back to the Old House, and he’ll wait for her to join him. Once he’s there, he starts talking to her through the portrait, because obviously at this point there’s really no distinction between symbols and physical reality anymore. 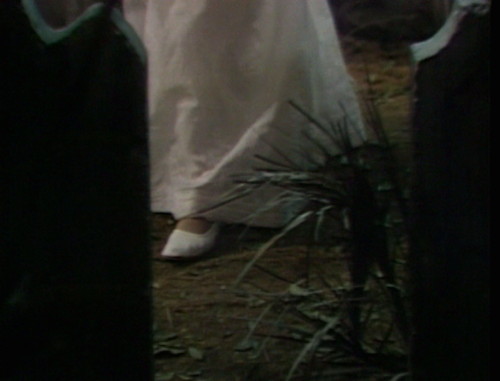 And will you look at that! Here she comes, making her way slowly through the cemetery. You really do have to hand it to the powers of darkness; they put on a hell of a show.

But this does bring up that weird problem of whether Josette’s spirit is still tied to the corpse or not.

According to the rules of the show, it doesn’t have to be. Back in 1967, we saw Sam lift up Sarah’s ghost and sit her on a stool, and I don’t think anybody imagined that it was actually her reanimated corpse, shuffling and moaning as she staggered out of the mausoleum, pulling on a bonnet.

And when we saw Jeremiah raised from the dead a couple months ago, there were times when he would suddenly vanish, suggesting that he wasn’t literally a standing corpse. But here’s Josette, opening the door and dragging her carcass across the threshold. 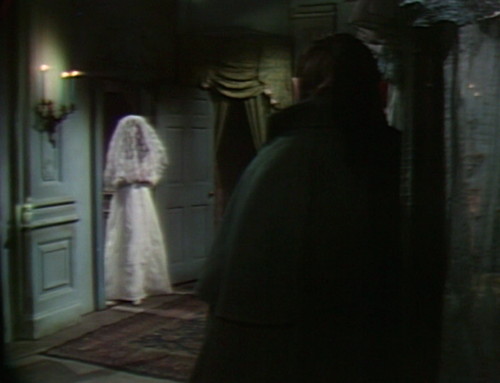 But that’s true love, I guess. You can’t explain it; it’s just magic.

Barnabas:  You came back.

You forced me to come back. You brought me here against my will.

Barnabas:  You’re here; you have returned to me!

Stop. Don’t come near me.

Oh, for Pete’s sake. What do you mean, “why not”? What are you not understanding about this situation right now?

I do not wish you to come any closer.

Barnabas:  Then you still hate me. 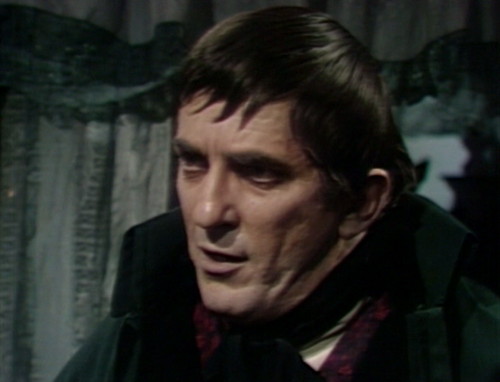 Ultimately, this story is about the limits of Barnabas’ influence. He may have the powers of darkness on speed dial, but at a certain point, there’s just nothing you can do. There are rules that you can’t change.

She begs him to let her go, to release her — to finally let a tiny bit of maturity into his heart, and realize that he’s not the only person who gets to have feelings. 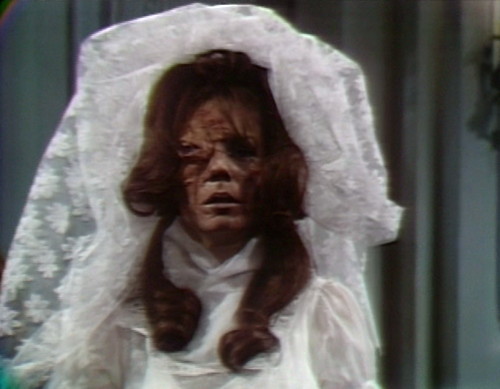 Then she lifts her veil. And that, kids, is how I met your mother.

Monday: The Catcher in the Rye.

Back in episode 283, Vicki visited Josette’s grave at the Eagle Hill cemetery, and talked about how it was set apart from the other Collins family graves. In today’s episode, Josette’s grave is next to Jeremiah’s, about three steps away from the Collins mausoleum.

Ben and Natalie step on each other’s lines in the cemetery:

Ben:  For what it’s worth, I liked Miss Josette. She was always real good to me. I didn’t want anything bad to happen to her.

Natalie:  I know. But the worst did happen.

Natalie:  And no one could prevent it.

Ben:  Maybe not the worst.

Also, Josette’s portrait is hanging in her room. It was hanging in the drawing room when we saw it last week, in episode 424.

Sandy Mitchell was the stand-in for Josette in the graveyard. This is her only appearance on Dark Shadows, and besides that, I don’t know a thing about her.

Monday: The Catcher in the Rye.