“Doesn’t it disturb you that the last thing she was able to say was your son’s name?”

You know, I don’t care how it looks on TV — I bet there’s a downside to murdering any random person you come across. For one thing, there’s all the mess to clean up, and it certainly won’t make organizing the neighborhood softball league any easier.

I mean, at a certain point I think you just need to say to yourself, I bet that person’s probably in the middle of something. Then you say excuse me, and you go find something else to do. Join a book club or something. It’s just not that difficult. 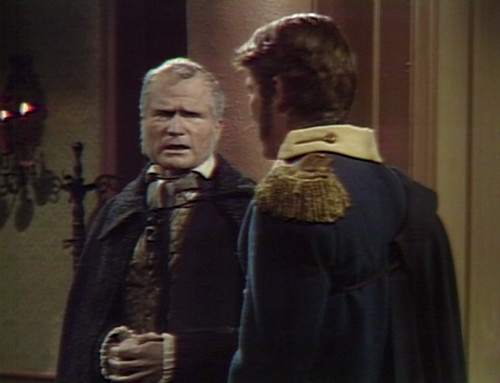 But try telling that to Barnabas; he never listens. Yesterday, he was lurking in the Old House when Suki Forbes happened to stop by, and what with one thing and another, he ended up strangling her to death. Suki’s husband Nathan heard her scream, and he rushed in just in time for her to gasp Barnabas’ name before she died.

Nathan ran over to Collinwood to tell Barnabas’ father Joshua what happened, and now they’ve come back to the Old House for a quick round of CSI: Collinsport, the police procedural show where nobody understands police procedure.

The first thing Nathan does is pick up Suki’s body and dump it on a chaise-longue in the back parlor. Then they stand around in the drawing room and look for another crime scene to contaminate. Shouldn’t they be searching for fibers? I’m not totally sure I know what a fiber is, but the people with flashlights on TV always get super excited when they find one. Maybe you can only find them at crime scenes; I can’t remember the last time I said to myself, Aha, a fiber. But there’s a lot I don’t know about forensics.

The big question Nathan wants answered is: why did Suki say Barnabas’ name? Everyone knows that Barnabas went to England a few weeks ago, and Suki never even met him. Now, Joshua knows that Barnabas didn’t actually go to England — he died, and they just told everybody that — but he also knows that Barnabas’ coffin was empty when he checked on it yesterday. It’s a complex situation, and all Joshua can do is stand there and make a series of impossibly grumpy faces.

Joshua is actually a great soap opera character, because he’s a very deliberate thinker, and that helps to pace out the story. He’s not one of the Goldfish People who need to hear the same information every day or they forget it — he’s retaining all of these weird clues, and he’s mulling them over. 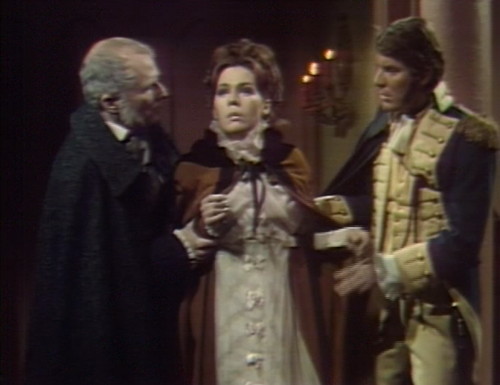 And then a mystery just comes along and solves itself right in front of them, which is super helpful because they aren’t making any headway with the other one. They’ve been searching for Josette for a couple episodes, since Barnabas appeared in her bedroom and led her out through a secret panel. And now she just wanders down the Old House stairs with a dazed expression on her face, calling for Barnabas.

Now, I thought it was funny in 1967 when Barnabas let the girl he was holding prisoner just wander around the house during the day. It turns out he’s been doing the same thing for centuries. You’d think that he’d be better at this; he’s had a lot of practice.

Anyway, back at Collinwood, Millicent and Naomi are talking about how worried they are, and then Joshua and Nathan come in practically dragging a near-comatose Josette between them. First they have to explain how they found her, and then they have to break the news about Suki’s murder, too. It’s absolute chaos around here, subplots ricocheting all over the place.

While Josette is getting settled upstairs in her bedroom, Millicent decides to help by writing a letter to Suki’s relatives in Baltimore, to inform them about her untimely death.

This is a sweet gesture, but it’s inconvenient for Nathan, who’s currently most of the way through his scheme to marry Millicent and get his hands on her outrageous fortune. Millicent thinks that Suki is Nathan’s sister, but she’s going to learn otherwise in about a minute and a half.

Looking through Suki’s papers, Millicent finds a wedding license, and that pretty much shoots this subplot entirely to pieces. It turns out that Suki’s brief run on the show was never intended to last; she was just a plot device to set off this particular cluster bomb.

And, oh, what a wonderful noise this explosion makes.

Millicent:  She wasn’t your sister. She was your wife.

Millicent:  She was your wife!

Millicent:  And you’ve been deceiving me! Everything you said to me was a lie!

Nathan:  I swear to you, Millicent —

Millicent:  Don’t say anything else to me, Nathan, please! I don’t want to hear any more of your lies!

Nathan:  Look, I wanted you to know, but there was no way for me to tell you. It was a marriage in name only. I wanted to end it, but Suki wouldn’t let me.

And she bolts for the door.

Nathan:  Millicent! You must listen to me!

And they run out through the front door, out into the night, and we don’t see them again for the rest of the week. So how was your day?

In act 1, as Nathan enters Collinwood to talk to Joshua, he pushes the door closed behind him, but it swings wide open again.

In act 3, when Nathan puts his cloak down on the table in the foyer, it falls to the floor and he has to pick it up again. 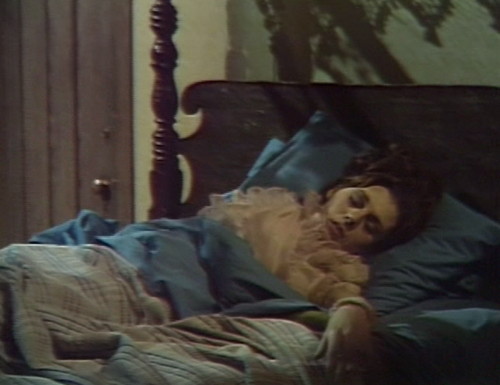