“What have I to look forward to, if the sight of me fills anyone that I love with terror?”

Okay, it’s Monday, and time for another Dark Shadows course-correction.

Three months ago, the DS writers were faced with a huge story problem: The new vampire character was an enormous hit, but that storyline was clearly heading towards a conclusion, with nothing left to do but expose and destroy the vampire. Then, in an unbelievable example of inspiration fueled by desperation, they sent Vicki back in time to 1795, letting the audience witness the vampire’s secret-origin backstory.

And now we’ve completed that three-month mission. We know the whole story of Barnabas’ curse, and how little Sarah died, and why Josette threw herself off a cliff. On Friday, Barnabas tried to call Josette back from the grave, until he found out that she doesn’t really look super appealing post-cliff-dive, which pretty much puts a period at the end of that sentence.

Unfortunately, that means that the writers are back where they started, as far as a Barnabas storyline is concerned. He’s a lonely vampire again, and Josette — his only reason for existing — is lost to him forever. So then what? 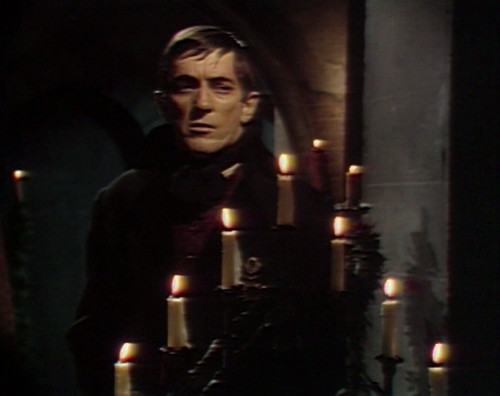 Well, then he moves back home. He’s been bunking out in the secret room in the Collins family mausoleum for the last month, which is kind of the vampire equivalent of a youth hostel — bare, gloomy, subject to unscheduled night-time visits from grave-robbers and assorted tourists.

So he does what any directionless young man does when his girlfriend leaves town and he doesn’t have a job — he moves back into his parents’ basement, lights some candles, looks off into the distance, and talks about how phony everyone is.

Barnabas:  Why do we never learn to leave the past alone? Why does each of us want so to bring it alive? I learned this night how wrong it is, even to think of it.

Yes, that’s right. Barnabas Collins — who just did the most obviously tampering-in-God’s-domain wrongest thing in the history of wrong things — is now lecturing the rest of us on letting go of the past. What do you mean “we”, fool?

But look how adorably mopey he is. As always, the only actor who could make this mess of a character work is the guy who happens to have the job.

There’s a weird magic in Jonathan Frid’s delivery, which captures the character’s endless reservoir of lonely, adolescent self-delusion. You don’t really feel sorry for Barnabas, because his problems are all the way his own fault, but you don’t ever want him to stop talking.

Like Holden Caulfield, Angela Chase, Ponyboy, Dawson and all the other damaged adolescent anti-heroes, he touches that part in us that will always remember what it felt like when the only thing in the world that mattered was you. 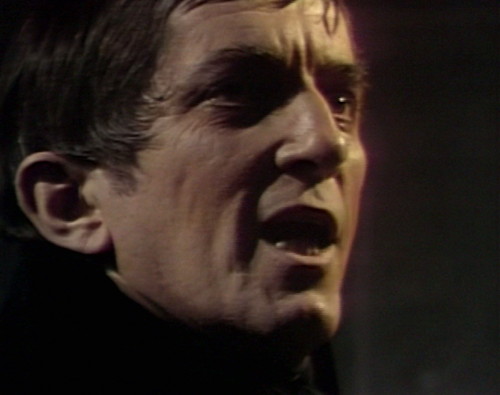 Still, there’s the haunting question of what he’s going to do when he grows up. He can coast for today, sulking in the basement and giving shockingly insensitive speeches about how tragic it is that Josette is ugly now — “I must remember only the way she looked when she was alive,” he says — but at some point, he’s going to be expected to participate in a plotline again.

His battle with Angelique has pretty much dried up. She’s still in the picture, at least as a mysterious floating head — but without a physical body, she doesn’t really want anything, except for some vague leftover revenge. So I guess he’s just going to sit in the basement for a while. 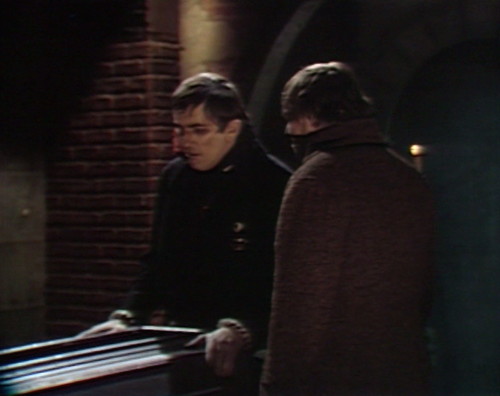 Ben is trying to talk him out of this move. Yes, the Collins family — or whoever’s left, post-curse — is now living in Collinwood, and the Old House is empty. But it can’t stay like that forever. At some point, hipsters will move in down the street, and the next thing you know, it’s all food trucks, bike lanes and vintage clothing stores.

You might get away with squatting in a burned-out apartment building with no electricity, but the Old House is a huge mansion, and people who own huge mansions don’t usually forget about them for too long. This is not a long-term plan.

But who needs plans when you’ve got mournful facial expressions? The camera stays super focused on the close-ups today, with subdued lighting that really fools you into thinking that the scene is lit by candlelight. Take a look at the lighting effects in this scene; it’s fantastic. This is an important skill on a show called Dark Shadows, and they have mastered it.

Okay, here’s some more self-absorbed dialogue, which I’m using to fill up the space between sad facial expressions, just like the show is doing.

Barnabas:  I don’t want to stay here for all eternity! Afraid to come out, accepting my life as a sentence of solitary confinement. 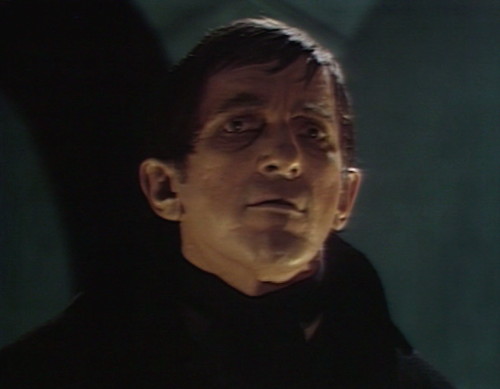 Barnabas:  Ben, I will be here long after you’ve gone. I have thousands of nights to look forward to, millions. 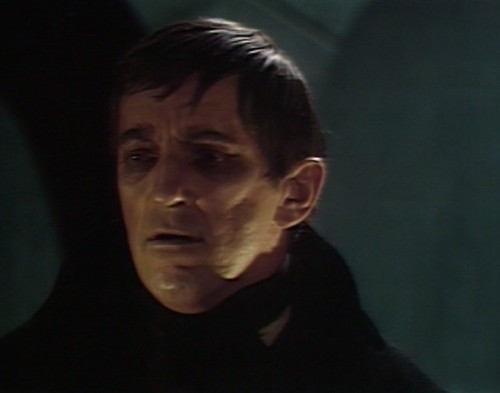 Barnabas:  What have I to look forward to, if the sight of me fills anyone that I love with terror? Even Josette did not want to come back to me.

Okay, that was fun, but we really can’t do that forever. But here’s where the course-correction kicks in — tomorrow, we’re going to figure out a whole new role for Barnabas, which will change the direction of the show forever.

We’ll still be stuck in the basement, of course, but we’re going to get a new focus that will lead us out of 1795 and back to the present day. Come back tomorrow to see how they pull it off.

Tomorrow: The Age of Kaiju.

At the very beginning of the scene where Daniel approaches the Old House, if you look beyond the column on the left side of the screen, you can see the candles burning from the basement set. The camera pans away a moment later.

When Abigail asks Daniel what Ben was doing at the Old House, he answers, “Unlocking a door. Locking a door.”

Yes, David Henesy is finally back on the show as Daniel Collins, Millicent’s young brother, who’s been mentioned on and off since before Millicent arrived, but he’s been off screen until now. David Henesy was last seen as David Collins in episode 364, a little over three months ago.

Tomorrow: The Age of Kaiju. 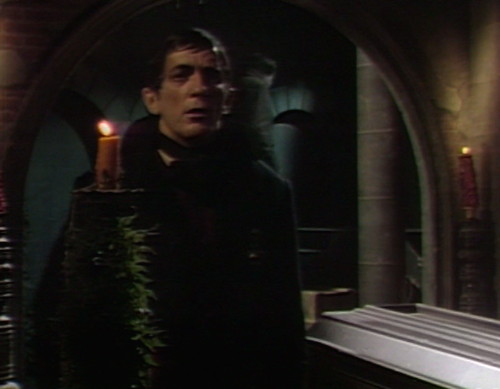