“Josette is dead! How DARE you dig her grave!”

Hey, guess what: Barnabas wakes up and gets out of his coffin, and he’s in kind of a bad mood. I know, news flash, right? I’ll give you a second to catch your breath.

To be fair, it’s been a rough week. Barnabas was planning to murder his fiancee Josette, and then somebody else came along and murdered her first, but in totally the wrong way. It’s a frustrating situation.

So he roars out of bed at a hundred miles an hour, just bouncing off the mausoleum walls and shouting, “Destruction, that’s all I want! Destruction, everywhere! Death! BLOOD!” This is how we start Dark Shadows episodes now. It ramps up from here.

So, there he stands — the Dark Knight, the Caped Crusader — haunted by tragedy that is almost entirely his own fault. Look at him, all tensed up like a bad idea just waiting to happen.

By the end of this episode, he will come up with the single worst plan that he ever makes in the entire run of the show. And this is the guy who kidnapped a waitress, put her in a wedding dress, and told her to listen to a music box until she forgot who she was. You would think that would be pretty much the basement level of vampire plans, but no. It turns out there’s, like, six levels below that.

He decides that he needs to see Josette one last time, which is not advisable. Ben reminds him that Josette died by jumping off a cliff onto the rocks below, and that kind of thing makes the recovery process a little challenging. I bet Riggs had to go out there with a wheelbarrow, a spatula and a whole mess of paper towels. 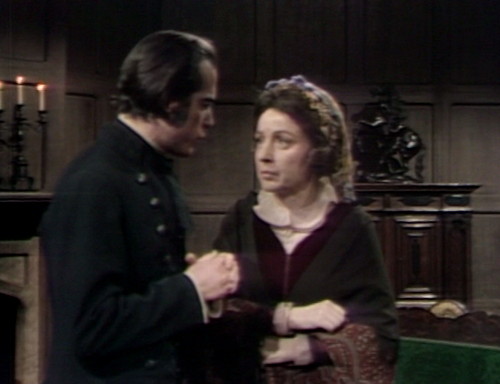 Back at the house, Barnabas’ aunt Abigail is holding another conference with the witch hunter, Reverend Trask. They’ve locked up Vicki, the time-traveling governess, and put her on trial for witchcraft.

They look worried, and I’m not really sure why; the trial is leaning pretty decisively in their direction. But Abigail just isn’t satisfied.

Trask:  Every living soul is in mortal danger. Yours! Mine!

Abigail:  Yes. Why does that stupid judge prolong this needless trial? That girl is indisputably a witch. Why can’t he see that?

Okay, dang. The girl’s in prison. I think there might be more than one bloodthirsty member of this family. 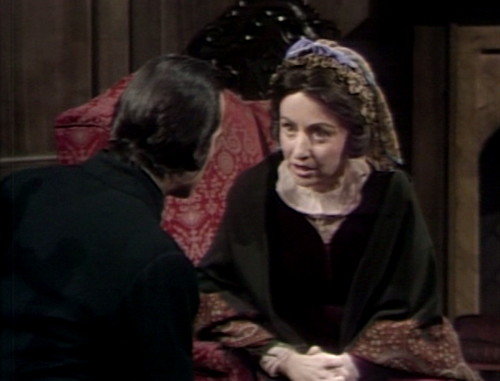 So Abigail comes up with an idea: maybe Vicki’s lawyer, Peter Bradford, should be made to understand that the Collins family can make things hard for him, if he ever hopes to advance in the world.

Abigail:  Stubbornness is a vice, dear Reverend, that I think it’s your duty to eradicate.

Trask:  You want me to talk to young Bradford? 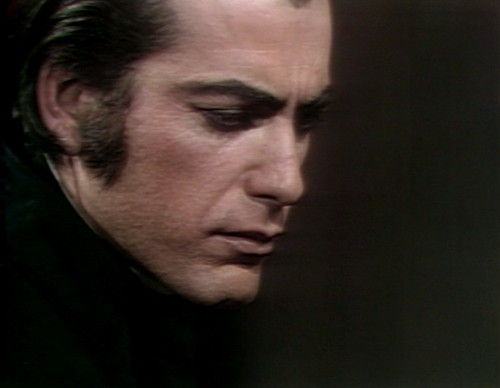 Trask pauses for a moment, clearly thinking, Holy crap. I think she wants me to seduce the guy.

But he seems okay with it, because he brightens up immediately, and leaves the house with a crafty smile on his face. It’s nice to see a guy who really enjoys his work. 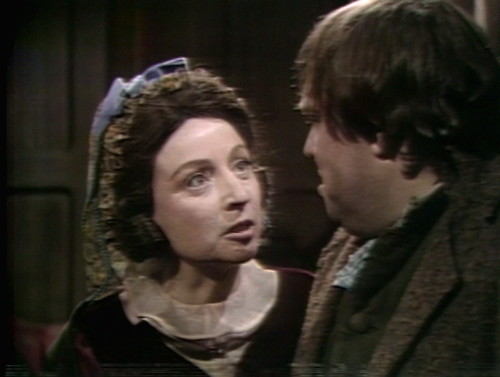 Left on her own, Abigail pounces on Ben, who’s come in to tend to the fire. She wants him to testify against Vicki, but he says that he can’t — he knows that she’s innocent.

It turns out Abigail has a suggestion for Ben, too.

Abigail:  You are to dig the grave, is that true?

Abigail:  I have another task for you. As you dig the grave, remember its purpose — to house the dead. And remember, there are many paths to the grave, and a path can be found for you — filled with back-breaking punishment, at that prison from which you came!

Okay, wow. What is the matter with this family? Everybody named Collins needs a time out.

So this has been a fairly intense episode up to now, and it doesn’t let up. Dark Shadows has reached the stage where every single scene is a desperate, life-or-death shouting match. This is not pleasant or relaxing television that you can have on in the background while you’re washing the dishes. This is television that reaches through the screen, and grabs you by the hair.

The show’s ratings have been gradually increasing since around halfway through the first vampire storyline, and viewership really starts to pick up now. I think that one reason for its success during this period is that most people didn’t have remote controls in 1968. If you wanted to change the channel, you’d have to walk right up to the television set and turn the knob. I don’t think I’d have the nerve to do that during a Trask scene; I’d probably have to wait until the commercial break and sneak up on it. 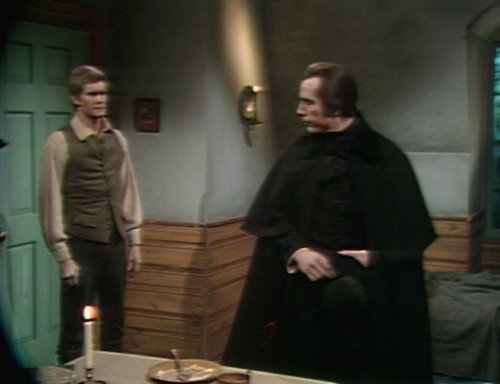 Anyway, this is the scene where Trask shows up at Peter’s one-room studio apartment, dressed to kill. You can tell he’s trying to make an impression, because he’s wearing his party cloak.

Peter:  What is it you want?

Trask:  Strange. I was about to ask you the very same question.

Peter:  Come to the point.

Trask:  All right. What is it that you want?

And then he turns, and looks Peter in the eye.

So, wow — is this really happening? Cause I think these two actually have something. I can see sparks flying. Observe the technique.

Peter:  At the moment, your absence might sum it up.

Trask:  Come, come, Mr. Bradford. I’m sure you understand better than that what I’m saying. 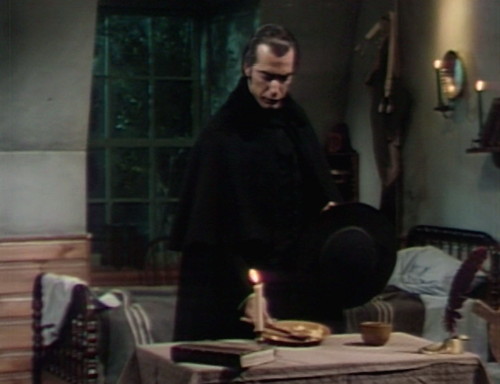 Trask does a quick survey of the room.

Trask:  Rather humble fare you have to eat, isn’t it?

Peter:  I have enough to eat, thank you.

Trask:  And your lodgings — I should imagine this room gets quite cold on occasion.

Trask:  I notice you can’t even afford some wench to come in and do the cleaning, and mending. 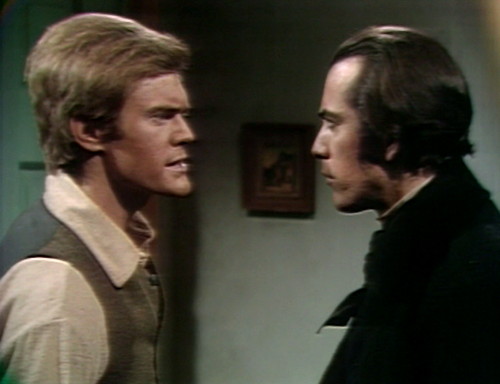 So, apparently, the Reverend has come over to criticize Peter’s food, his apartment and his clothes. All he has to do is mention Peter’s hair, and this will officially be an episode of Queer Eye. What is going on? Why don’t you kiss him, instead of talking him to death? 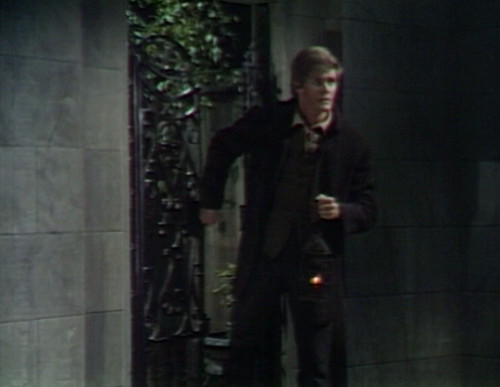 But there’s no time for romance; we’ve got to get back to the vampire for his big epic fail idea.

Peter’s decided that he needs to hide the Collins family history book that Vicki brought back with her from the 1960s; it would be a key piece of evidence against her at the trial. He decides that the best way to do that is to go to the cemetery in the middle of the night and bury it next to a gravestone. I don’t know how this occurs to him. I’ve given up trying to understand these people.

Anyway, Barnabas is in the mausoleum, and he hears someone digging outside. Thinking that it’s Ben digging the grave, Barnabas calls out to him. Then, realizing his mistake just in time, Barnabas ducks back through the secret panel just as Peter enters the mausoleum. 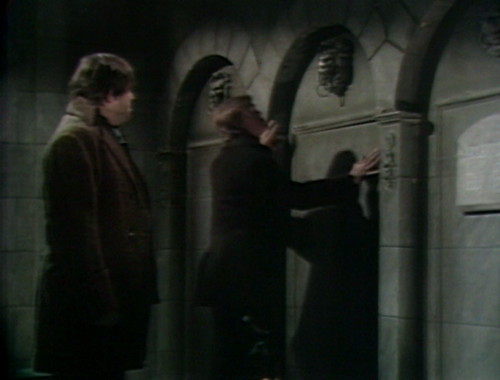 By the time Ben arrives, Peter is tapping on the walls, trying to find the door that he glimpsed as he was coming in. It’s all plot today, just one damn thing after another. I think they’re getting the hang of this at last.

Naturally, Barnabas heads straight for Plan A, which is: kill everyone you come in contact with.

Barnabas:  He heard me! I’m sure he saw the panel close! He cannot be allowed to reach his home!

Ben:  He ain’t sure if he’s seen or heard anything.

Barnabas:  I cannot take that chance!

God damn it, dude. Slow your roll. How is this the answer to everything?

Ben manages to talk him down, but Barnabas is on a roll; there’s no stopping him. He steps out of the mausoleum, and regards Josette’s freshly-dug grave.

Barnabas:  I see your work is done.

Barnabas:  No matter. Pile earth a mountain high, it will make no difference.

Barnabas:  I do not know what powers are mine, or how far they reach into the dark. But I promise now, I will summon their full force to call her back.

Barnabas:  I have made my own dark conquest of the grave. Hers will be next. This, I swear!

So there you have it — capping off ten straight months of bad ideas, Barnabas is about to embark on his dumbest caper yet. Mayhem will ensue. Let’s meet back here tomorrow and hunt for survivors.

In the teaser, Barnabas loses track of the “Are you afraid” sequence:

Barnabas:  Why should I avoid the sight of an opened plot of earth?

Barnabas:  Are you afraid… that I would hate the sight… of such… an open plot of earth?

Ben:  You know you would.

Barnabas:  Are you afraid that I would take hold of such a man?

Also, Peter tells Trask, “I wonder if you ever stop, just once, in all your lies and hypocrities, and think what a waste it is to sell out your life, your one and only life, by trying to destroy everything you don’t understand!” He means “hypocrisies”. There’s no such word as “hypocrities”.

Champion prop-spotter Prisoner of the Night says: “When Trask visits the lodgings of Peter Bradford, this is the same set that was used for Angelique’s room at the Old House, first seen in episode 370. When Act 3 opens, we see Peter in his room reading the family history, but with the same camera view from inside the fireplace that was use for this set when Angelique was seated before the fireplace concocting potions. A black bolt lock has been added above the handle of the green door, to create the impression of independent quarters. We see this room redressed again in episode 440 as Maude Browning’s room.” 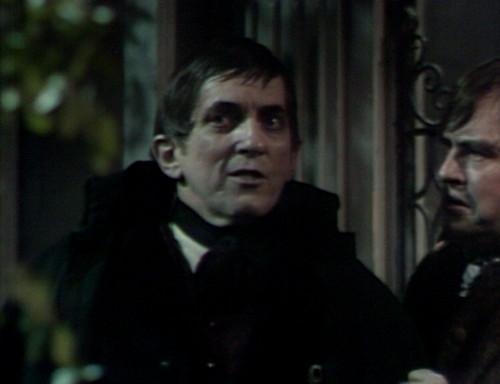