“They’re going to keep Barnabas away from me, and avoid the duel. That means that all of your lies and deception will go unpunished.”

In yesterday’s episode, we saw the beginning of Vicki’s witchcraft trial, the first example of any kind of sustained legal procedure on Dark Shadows. And this is an odd moment for them to be apprehending suspects, because the 1795 storyline is basically the moment when we say goodbye to law enforcement in Collinsport.

When they get back to the present day, we’ll see a few scattered appearances of the useless Sheriff Patterson and his even more useless successors, but they don’t amount to much, unless you count rising from the dead as a zombie and then being torn apart by a werewolf.

But in 1795 — even with a whole subplot involving a trial and a prison term — we don’t see a single police officer. There’s a couple jailers, a few judges and an executioner hanging around in the back somewhere, but there’s nobody representing the police force. In fact, the main characters don’t even consider calling in the police, despite the sudden rash of suspicious deaths in and around the grounds of the Collins estate. 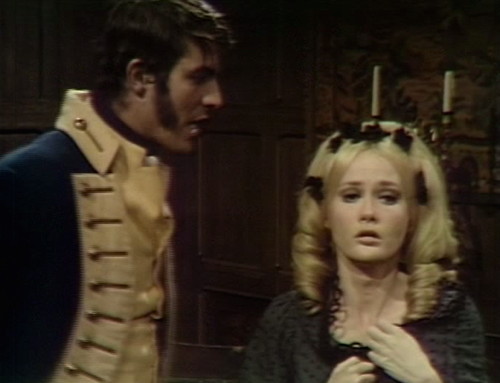 Of all the unexamined crimes we’ve seen lately, the most egregious example is the murder of Suki Forbes, who was strangled by a vampire in the Old House while she was waiting for her estranged husband, Nathan, to join her for a secret assignation.

Nathan arrived on the scene just a moment past the nick of time, and found her quote-unquote “already dying”, which is quote-unquote an “enormous coincidence”, and there’s no reason why anyone else on the show should believe it for a split-second. 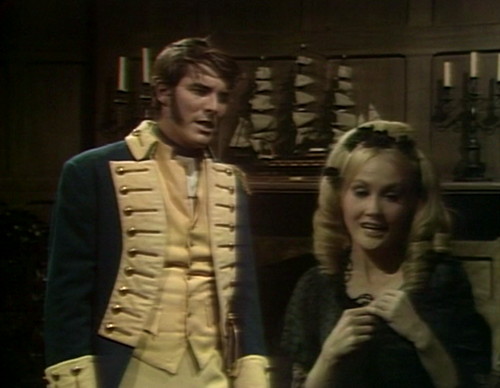 As Joshua pointed out when they were visiting the crime scene, Nathan is the only person with any ties to Suki. In any normal universe, Nathan would be the prime suspect — in fact, the only suspect — and should already be in police custody. And yet nobody sends for the constabulary. 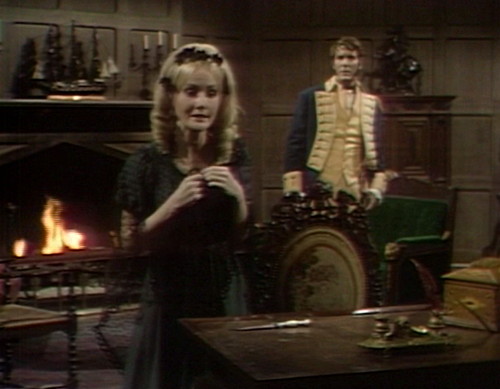 But Dark Shadows has lost interest in forensics, and with good reason. They gave police work a fair shot during the early Barnabas storyline, and it just didn’t work out. By now, they’ve given it up completely.

There are several reasons for the show’s loss of faith in the justice system. 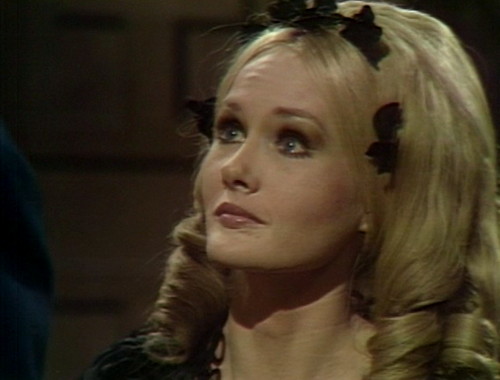 For one thing, bringing in the police slows everything down. In a medium where car chases are out of the question, law enforcement activities take forever. Police sequences usually take place after the crime has already occured, when the assailant is off-screen somewhere, blending in with the underbrush.

If you can’t do high-speed pursuits, then police work is basically just a gradual accumulation of facts — examining the physical evidence, talking to witnesses, checking alibis and sending things to the lab. 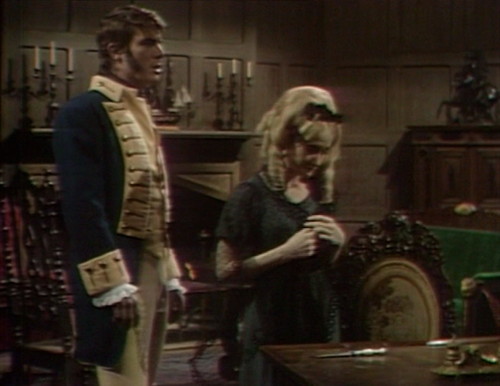 So if you see a cop on screen in a non-cop-oriented soap opera, then you know it’s safe to fast-forward, because the very presence of the police officer is an inhibiting factor that gets in the way of the crazy people doing the crazy things that they should already be in jail for. 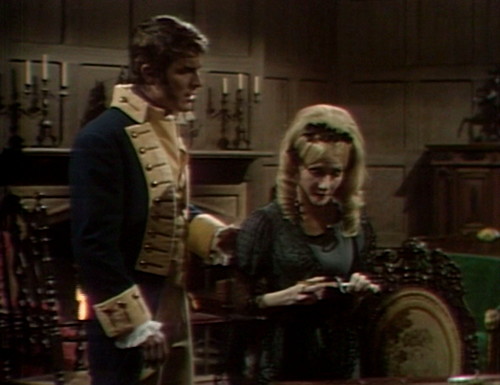 The second problem is that the police close off story options. In the real world, I’m not going to haul off and punch somebody in the chops, because real-world law enforcement takes a dim view of that sort of behavior. That’s a good thing, obviously, because I don’t want to get punched either, and that’s how we encourage a chops-punching-free lifestyle, which is what I prefer.

But if I’m watching a TV show, there’s no reason for me to sit there and watch a character not do something. In real life, I see people not doing things all the time; it’s not gripping. The fictional TV world is supposed to be my recklessness simulator. 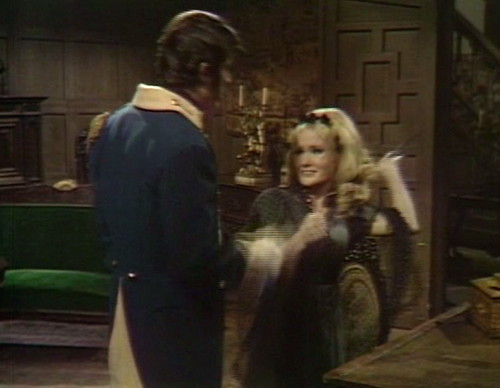 For example: Here’s Millicent taking the law into her own hands, and expressing her feelings through the medium of a letter opener. This is the kind of thing we’re here to see. 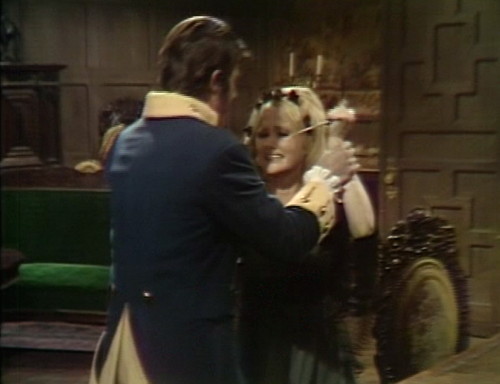 And besides, soap operas aren’t the same as mystery shows. There are lots of very successful television shows about detectives, forensics investigators, and elderly mystery writers who just happen upon a dead body every single Sunday night for twelve years, but that story structure just doesn’t work when you try to graft it onto a traditional daytime soap. 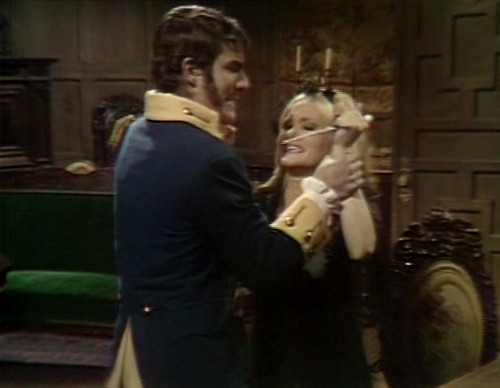 The key to a mystery/detective story is that there’s crucial information that the audience doesn’t know. For the most part, we see things from the investigator’s point of view, and all we know is what they’ve uncovered up to that point.

There are exceptions — we usually see little slivers of flashbacks, or an opening teaser showing the crime being committed — but they’re always carefully staged so that you see the bad thing happen, without seeing who done it. 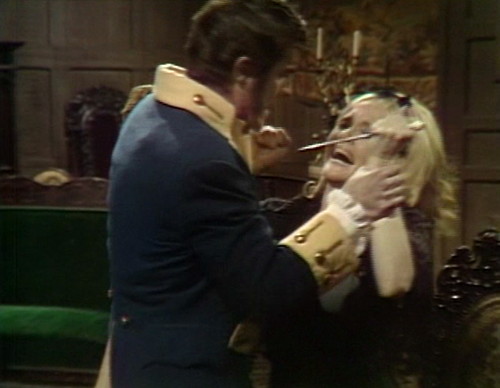 That structure puts the audience on the investigation team, which makes the slow accumulation of facts interesting for us to watch. Every piece of evidence that the detectives uncover gives us new information, and pushes the story forward.

Now, personally, I don’t think that makes those shows interesting enough to watch, but apparently people in nursing homes do, and that explains the entire CBS prime-time schedule. 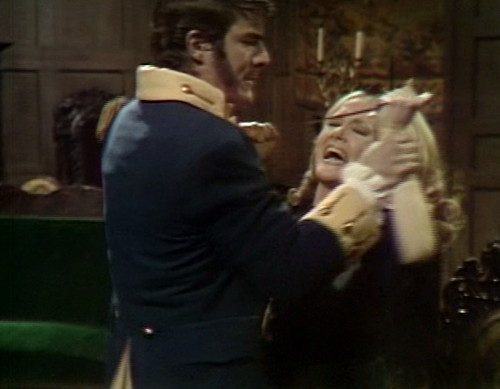 But the narrative structure of a soap opera is the exact opposite. The audience sees everything on a soap opera.

This is partly based on the mechanics of soap production — if you have to deliver an episode every single day, you can’t have one main character who appears in every episode. You’d burn out the actor, and the audience would get bored.

Instead, soap operas are structured around a loose collection of contract and recurring players who share screen time and storyline focus between them, so the show can’t sustain that sense of audience identification with an investigation team. 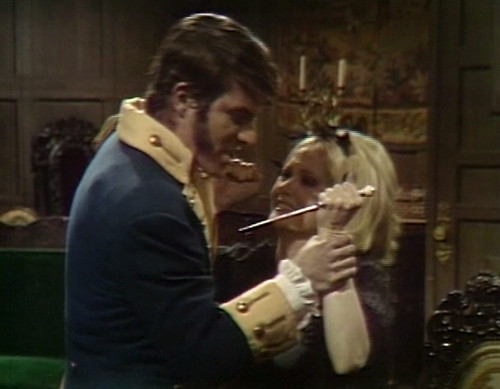 Besides, soaps are built around showing us personal, intimate moments. We don’t just see characters during the high-drama moment of their lives; we see them going to the gym, and eating lunch. On an hour-long daytime soap opera, you’re guaranteed to see characters sitting down to at least three different meals in a given week. No other genre does that, keeping the audience in super-close touch with practically everything the characters say and feel.

(By the way, that rule somehow doesn’t apply to Dark Shadows, unless you count drinking sherry as a meal, which I do.) 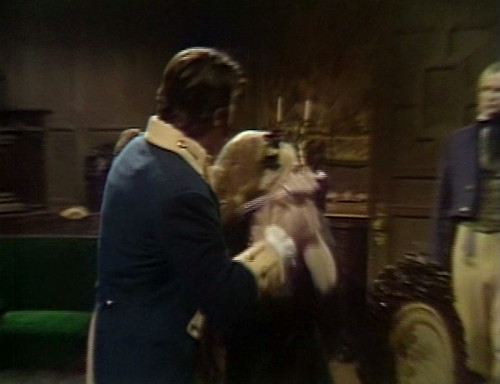 So we can’t just follow the detectives as they uncover the secrets of the supporting cast. We already know all the secrets; we were there when it happened. Watching the police investigate a crime that we already know about is just tedious.

The only time that soap operas limit the audience’s access to information is when they decide to do an official “murder mystery” or “serial killer” storyline, which is a terrible idea that never, ever works. They’re just trying to swim upstream, following a narrative structure that’s completely oppositional to the rules of good soap opera. 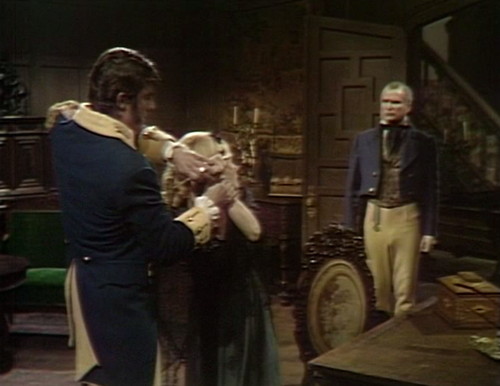 Finally, the last reason why law enforcement doesn’t work on a soap is that the response to a crime needs to feel satisfying for the audience on an emotional and aesthetic level, and arresting a character is never going to be the most satisfying resolution.

For example, take Barnabas shooting Jeremiah in the duel a couple months ago. Barnabas was punished for doing that in several ways. Josette was tied even closer to Jeremiah after his death, because she had to honor his memory. Barnabas felt guilty for killing someone that he loved. And most importantly, the duel was another misstep that brought Barnabas closer to his death, and his transformation into a vampire.

Imagine what that story would have been like if — instead of all of those emotion-driven, character-based consequences — they’d brought in some random Sheriff character to examine the body, look for the weapon, question all the witnesses, and finally arrest Barnabas and put him on trial. That would take weeks, and it still wouldn’t feel like anything. 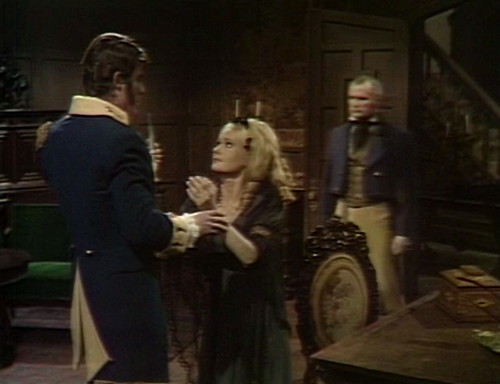 The Barnabas/Jeremiah duel is the stuff of Shakespearean tragedy — the uncle bewitched into stealing his beloved nephew’s fiancee, the nephew shooting his uncle to reclaim the bride, and then losing her anyway, all of them spiralling into grief and madness. That’s mythology-level storytelling.

So if the next episode is about waiting for a ballistics report from the forensic lab, then that’s a huge shift in tone that renders everything else meaningless. 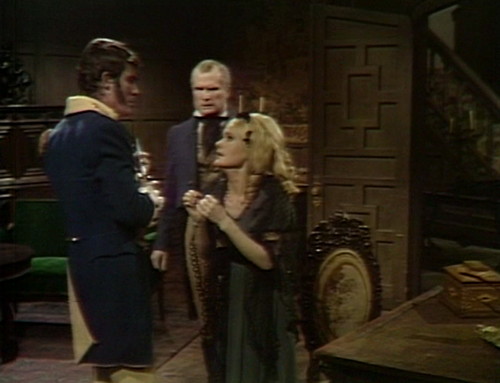 For the story to feel satisfying, we have to see a clear connection between who the person is, what they did, and what happens to them as a result. A prison term just doesn’t feel personal enough. 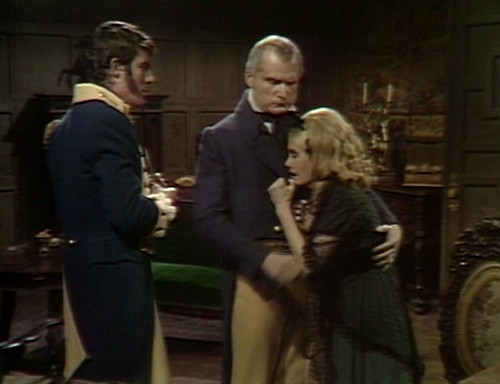 Later on in today’s episode, after Joshua brings Millicent up to her room to calm down, he tells Nathan that from now on he’s not allowed on Collins property, including the shipyards where he works. Joshua is also planning to write a letter to the Navy, informing them of Nathan’s misconduct. 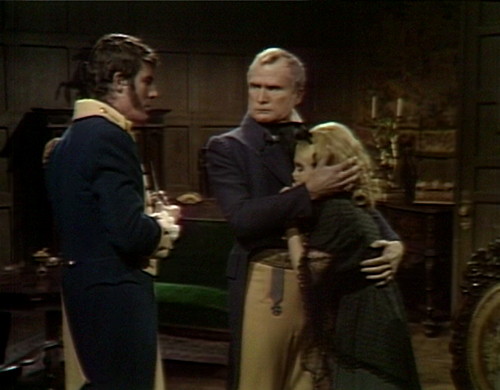 That’s a satisfying threat, because it arises naturally from Nathan’s personality and his crimes. Nathan is a social climber and a gold-digger, and now he’s lost access to Millicent’s fortune, and to the profitable connections that his relationship with the Collins family brought him.

Nathan over-reached, and he ends up with nothing, and that feels right. At this point, we don’t need to read him his Miranda rights. Just hand him a letter opener, and get out of the way.

In the mausoleum, Ben tells Joshua, “I can’t understand what coulda happened to it.” Josh says, “I was hoping that you could! Tell me.”

A few seconds later, the boom mic can be seen when Ben walks away from Joshua and says, “I ain’t been near the mausoleum since the day Mr. Barnabas was buried.” The camera quickly corrects, and pans down. 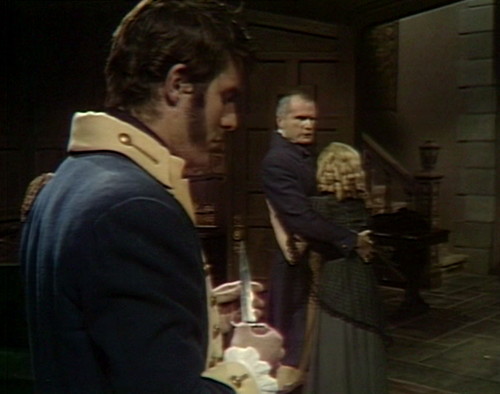