“It will give me great joy to see you rise from the dead, and walk the night.”

“Believe me, it would make me very happy to kill you,” said Angelique, “but I have decided that you would be more valuable to me alive.”

And yeah, I guess so, because here we are again. That was from July, when the Parallel Angelique imprisoned the actual Julia for a week in a secret basement cell, and now it’s November, and the 1840 Angelique is back at it, but in a deserted lighthouse this time. The spectacle of a power-crazed Angelique tying Julia to a barrel of TNT is so irresistible that they’ve done it twice in four months.

We’re getting close to the end of Dark Shadows, and this story point is the logical conclusion of everything that’s happened since 1967. Strip away all of the details — the families, the time periods, the wannabe it ghouls — and this is the result.

Unable and unwilling to stop himself, Barnabas bites a pretty girl, and then stands around and feels bad about it. Angelique steps in and kills the girl, who turns into a vampire. Then the vampire girl bites Julia at Angelique’s instruction, and now Angelique stands there while Julia slowly succumbs to her wounds, and talks about how happy it makes her.

This is the culmination of all of Barnabas’ bad choices and general ineptitude, and he has no idea what’s going on. He’s just wandering around asking questions, while the women in his life are merrily murdering each other. This is basically the most obvious thing that could ever happen to Barnabas, so it’s good that we’re getting around to it while we’ve still got the time.

“I’m sure you’re not surprised to see me, Julia,” smiles Angelique, as we escape to Witch Mountain once again. Julia is not surprised. Nobody is.

“You’re in an old lighthouse. I had Roxanne bring you here. She is completely under my control.”

Angelique flashes her crocodile smile. “Why nothing, dear sister in law. I’m simply going to allow nature to take its course… and let you die.”

A lighthouse is a navigational aid, a structure that stands apart and above, so that you can tell where you are in relationship to it. Its purpose is to guide you through dangerous waters, and a hundred episodes away from cancellation is about as dangerous as it gets. Nature is taking its course, all right, and it’s heading straight for the rocks beneath Widow’s Hill.

Now, technically this whole sequence has very little to do with the rest of the 1840 storyline, which is primarily about Gerard, Judah Zachery, Quentin and Daphne. They’re all getting possessed and plotting against themselves and each other, paving the way for the final crisis to come. Meanwhile, the time travellers are off in their own corner, Rosencrantz-style, trying to get to the bottom of things but not making much headway. Pretty much anything could be happening in the main story, in this or any other time period, and Barnabas, Angelique and Julia would still be doing more or less this.

“Oh, I suppose I could have destroyed you in a more conventional way,” Angelique enthuses, “but that would have given me no joy. It will give me great joy to see you rise from the dead and walk the night.”

And that was true five months ago, too, in another time band. Back then, Parallel Angelique said, “I could resort to black magic to make you suffer even more, but I think I like this way better.” She was talking about slowly starving Julia, rather than letting her bleed out and ruining a perfectly good lighthouse, but it’s the same impulse, a form of competitive cruelty designed for maximum audience appeal.

This is why they had to bust up the continuity, and loop Angelique back into a previous time track. Contempt breeds familiarity, especially on a soap opera, a genre where the characters burn through every possible story point and then keep on going. If you wait long enough, two popular adversaries will inevitably face a common enemy, or get trapped in an avalanche, or go through some experience where they have to put aside their differences and work together.

That’s what happened a year ago, at the end of 1897, when Angelique helped Barnabas and Julia to defeat Count Petofi. A couple months later, during the Leviathan story, she and Julia were borrowing portraits from each other like old friends with new aliases.

But a few months after that, the Parallel Time story needed a villain, so they minted a new version of Angelique who was willing to cast voodoo curses at civilians, and then a few months after that, they roped in this rebooted she-witch, restored to factory settings. If things keep going at the current pace, there’s going to be a new Angelique meeting and disliking Julia up to four times a year. That’s why they’re winding Angelique back to 1692, to give her some more room to run. 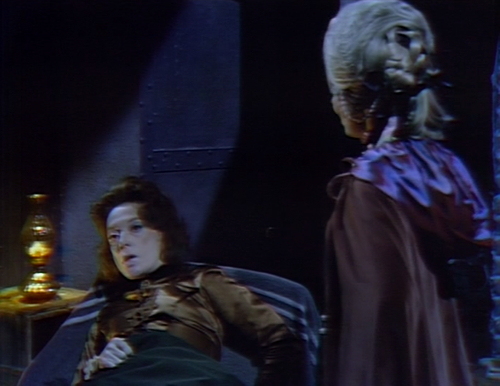 “And just think, Julia!” she continues. “In your new existence, you’ll be able to understand all that Barnabas has gone through. You’ll be closer to him than you ever have been before. Isn’t that what you’ve always wanted?”

Which is hard to figure. I mean, there was a time when Barnabas did actually want a vampire vixen of his own, as Angelique knows; he had a coffin built for two ready for Josette to join him. Angelique’s issue with Julia is that she’s too close to Barnabas, but this scheme might really bring them closer.

But supervillains tend to act in counter-productive ways, because cruelty is its own reward. Pretty much everything that Angelique has ever done is based on the idea that hurting Barnabas’ friends and family will be an industrial-grade aphrodisiac. It never really made a whole lot of sense in the first place, so don’t expect them to unpack this concept now. 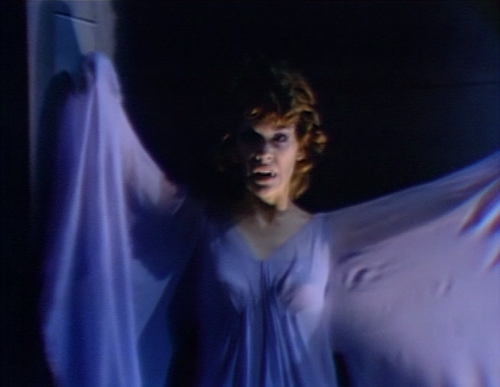 “You shall spend the rest of your life here, which won’t be very long,” Angelique said, and she was right. We’re firmly in twilight territory, where every story point is an echo of something they’ve done before. They’re even repurposing the vampire lady in a white dress, from the Dark Shadows movie. They can’t keep doing this forever, and pretty soon, they won’t have to.

“Your candles will go out soon,” said one of the Angeliques, “and you’ll be left in darkness. You have no food, no water, and no chance for escape. You’re going to rot in this room, Dr. Hoffman!” She didn’t, as it happens, and she won’t this time, but stay tuned. That prophecy is bound to come true, sooner or later.

After Angelique asks Julia, “Isn’t that what you always wanted?” in act 1, someone in the studio coughs. There’s another little coughing fit in act 3, when Gerard interrupts Angelique and Barnabas’ conversation.

Angelique asks Gerard, “I wonder if you would tell me why Daniel was so pleased to see you this morning, when you arrived?” It was nighttime.

Gerard tells Dawson, “I have found ways how to survive, Charles. Perhaps she did too.”

After Amadeus asks where Angelique is with God or with Satan, her first couple words have the reverb they’re using for Amadeus’ lines. 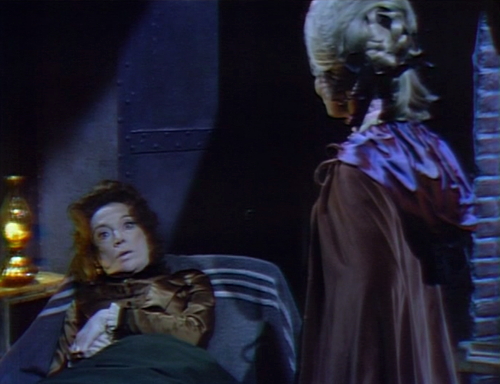