“The underground vault below the unmarked tomb, of course!”

Lightning flashes, thunder crashes, the hunchback turns the wheel that pulls the pulley that hoists the creature to the rafters. The set explodes in enthusiastic bursts of galvanic excess. The crazed doctor squints as he peers at the ceiling, waiting for the moment when all the power of God’s creation will be at his disposal. More sparks, more zaps, and all of nature cries out — in exaltation or disgust, I know not which — as the operating table winds its way back down, to rest again on the floor.

The doctor rushes forward, craning his neck to catch even the mildest suspicion of success, hardly daring to hope, and there — in direct defiance of all the laws of God and nature — the dead man’s fingers shudder — twitch — and a pale hand rises from the resting position.

“Look!” the doctor gasps. “It’s moving! It’s — alive! It’s ALIVE!” And then the monster gets up, maybe thirty to forty minutes later. 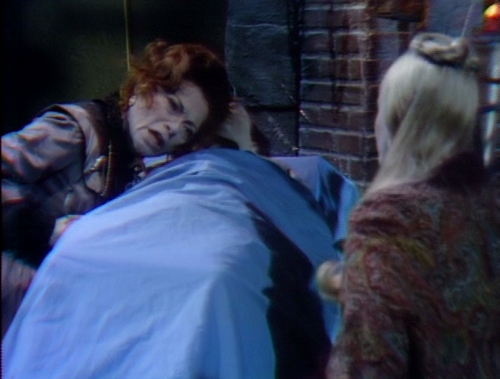 I mean, you can’t blame me for being a little disappointed. At the conclusion of yesterday’s episode, mad medico Julia Hoffman applied her stethoscope to the chest of the dead wizard that she’d sewn back together and infused with electricity and announced, “His heart is beating. Judah Zachery is alive!” Which is fine, except that he is clearly no such thing.

Because Leticia takes the mask off his face, and the guy just keeps on lying there with his eyes closed. He doesn’t rise, he doesn’t speak, he doesn’t clench his fist and curse the Collins name, he doesn’t do anything. Judah Zachery has been decapitated and inert since 1692, and now we’ve gone to all this trouble, and he’s still smacking the snooze button. I’ve never seen such a lazy villain. Get up already! You’re missing the best part of the day. 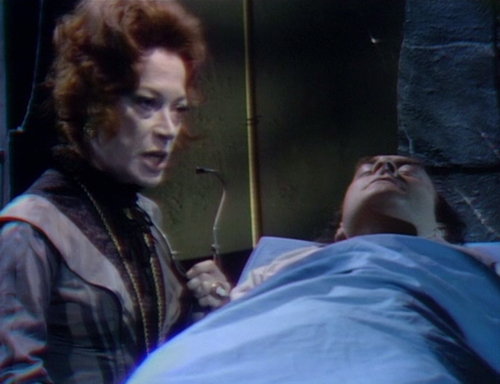 So if I’m disappointed, I can only imagine the letdown that you’d feel if you betrayed your friends and surrendered your immortal soul in order to shock some life into this monstrosity, and then he just lies there and doesn’t consume the world in blood and fire to any visible degree. Julia’s worked hard on this project, and she deserves a little appreciation from upper management.

“All the vital organs are just barely functioning,” she announces to Leticia, speaking in a hushed whisper as if she’s afraid of waking the guy up. “We must be very careful. If everything continues to function, then the body will be alive.” This is not the rocket sled to suspense that the audience was banking on.

I mean, who brings a Frankenstein to life and then says “we must be very careful”? That’s completely backwards; if you were a careful kind of person, you wouldn’t be underneath a  graveyard in the middle of an electrical storm, trying to resurrect a loaded warlock. This is a non-careful type situation.

And what do you mean, “if everything continues to function”? The guy’s not currently moving, or doing anything. Are you saying that the current options are this, and even less alive than this? Dear lord. When he necromanced his way into your dreams and said that he wanted you to bring him back to life, he should have been more specific. 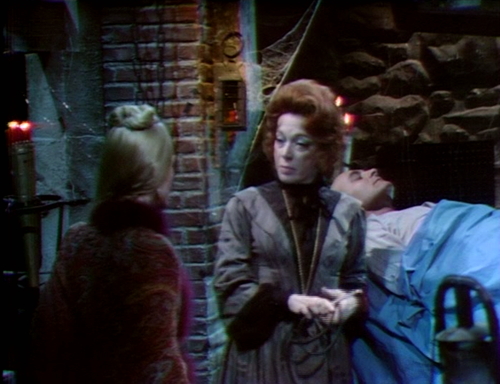 “And what do we do now?” asks Leticia, breathless.

“We just keep watching,” Julia says. “And checking his pulse and his heartbeat to see that there’s no change.” Yeah, a change would be awful, we wouldn’t want that. We’re perfectly happy with this scheming supervillain where you have to stop by every once in a while to make sure he still has a pulse.

Leticia has further questions. “How long will he stay like this?”

Julia says, “From what I can tell of his body, probably all through the night, in any case.” And then she turns around and walks away, mission accomplished. 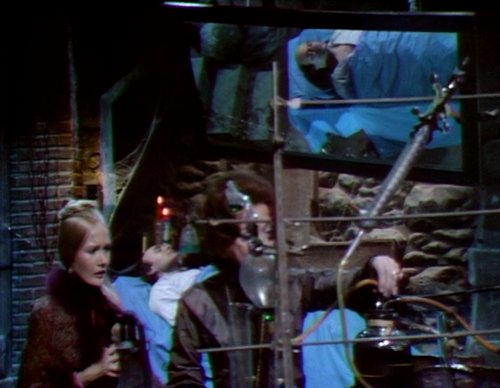 Now, I don’t know, maybe it’s just me and the rest of the world, but I don’t think I’m ready for a Frankenstein story where even the mad scientist gets bored, and starts doing paperwork. They keep the terrible Dead of Night music going, by the way, despite the fact that literally nothing is happening; it’s just on endless repeat, in the crypt’s CD player.

So there’s a metaphor, if you need one, for the state of the storyline. Everybody’s been circling for weeks around this weapon of misdestruction — Julia, Leticia, Gerard, Desmond — all of them drawn inexorably into the web of a purported character who at the moment is essentially a pantomime horse. Look at all the trouble and expense they’re going to, to turn this chunk of horsehair into a cosmos-killing supervillain.

And honestly, if we stop checking his pulse for a while and just let him gradually slip into oblivion, would it make that much of a difference? We already have Gerard, who’s apparently an evil pirate-sorceror with an undead zombie crew lying under three-quarters of an inch of loose topsoil, just waiting for the go signal. Or at least I thought we had that, it was a hundred and thirty years from now so I might have some of the details mixed up. 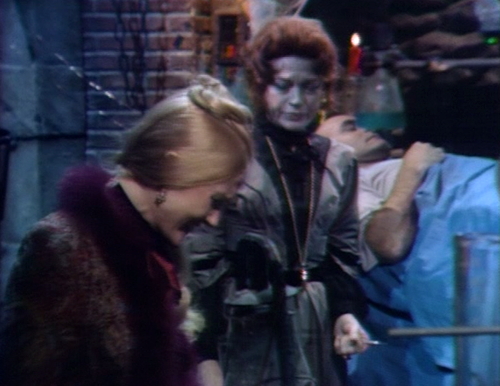 “I want to prepare another injection,” Julia says, “just in case we need it later.” This is another hallmark of literature’s great horror stories, people preparing extra things just in case. “Will you get the adrenaline?”

So Leticia goes over there, finds the orange liquid, and promptly drops it on the floor, smashing the bottle and scattering the adrenaline every which way.

“Oh, what are we going to do?” Leticia wails.

Julia shakes her head, and sighs. “Well, I have some more adrenaline at Collinwood, I’ll have to go and get it.” So at this point, the metaphors are just piling up in heaps. 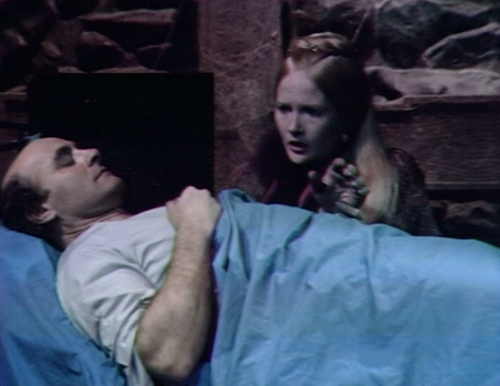 While the doctor’s out of the room, Leticia gets acquainted with the legendary wrist of Judah Zachery, but she doesn’t seem to like it much.

“He’s getting weaker!” she wails, in the direction of the fourth wall. “I must be doing something all wrong!” I’m not sure how taking somebody’s pulse could possibly be disastrous, but what do I know, I don’t even have a spare bottle of adrenaline.

“Oh, Julia, where are you, why don’t you come back?” Leticia cries, and then rests her ear on Judah’s chest for a moment, which is apparently a substitute for stethoscopes. “Oh, please, God!” she gasps. “His heart is almost stopped!” She’s looking in the wrong direction for assistance; I don’t think God is taking calls on this topic.

Leticia decides to put the electrically-charged gold lamé mask on top of Judah’s face, but this crisis is so desperate that not even fashion can help. So she does what anyone would do in this situation; she dashes out of the crypt and runs away, never to return. 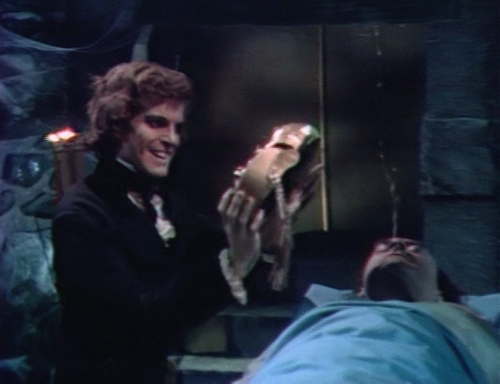 So it’s up to Gerard the rascally pirate king, as usual, to rouse the show out of its slumbers and get things rolling again. He snatched the address of this makeshift emergency room from someone else’s little black book, and he finds the expired wizard lying on the table, asymptotically approaching death. Here he is, Gerard, the living injection of adrenaline that we’ve been waiting for.

Somewhere up in the sky, the lightning breaks loose again, sending an extra jolt of juice down the wires and directly into Judah’s core processor. The body bucks and jerks, but Gerard doesn’t care; he’s only got eyes for the gold. You have to expect that from pirates, they’re all about the booty. 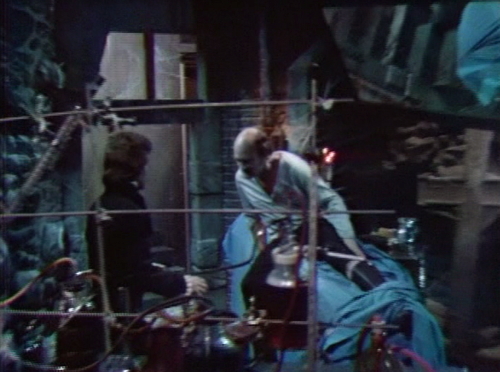 But that’s the last straw for Judah Z; today is his rebirthday, and he’s not going to let some interloper walk in and rifle through his presents. He stirs, he wakes, he walks, and he’s unhappy.

Naturally, the room catches on fire. It’s not clear how that works, it seems like Gerard just bumps into something, and the world explodes into flame. But Gerard has a talent for setting other people’s property on fire; that’s kind of his party trick. 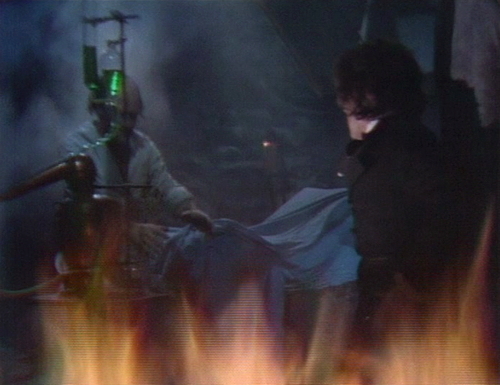 And how could this mad experiment end, except to go up in smoke, and down in flames? It was never that good of an idea in the first place, spending weeks and weeks trying to get everyone to fear a South Seas souvenir. Maybe it’s better to let Gerard do what he does best, burn it all down and start again. The smoke rises and the monster coughs, and Gerard slips away into the night, as Judah’s head falls off and rolls into the corner. Honestly, I don’t know why we even try.

Tomorrow: The Trouble with Tulips.

The opening narration describes Judah Zachery as “a man decapitated for witchcraft in the year 1592.” It was actually 1692.

At the beginning of act 1, when Julia listens for Judah’s heartbeat, the camera pans up to the large overhead mirror, revealing the boom mic at top right.

Gerard has a little trouble closing the door after Daphne comes in.

Daphne tells Gerard, “I got the back issues for them — for him, and he read them for a moment, then he signed for them.”

When Julia returns to Collinwood, she and Daphne act like they haven’t seen each other since before Daphne accepted the post of governess at Collinwood. Daphne’s been in the house for a week, and she’s perfectly familiar with Barnabas, so it’s odd that she hasn’t run into Julia until now. On the other hand, Julia’s been busy in her mad science lab, so I suppose it’s possible.

Not necessarily a blooper, but a curiosity at least: Gerard reads in Judah Zachery’s jounral about Desmond following Otis Greene’s clues to the unmarked tomb. Desmond did occasionally speak and write as if he were Judah, but why would he write all that down, and in the middle of Judah’s journal?

In the final scene, Laura Murdoch Radcliff’s gravestone can be seen — but that incarnation of Laura was born in 1840 and burned in 1867, as we learned back in October 1967, when Joe, Frank and Dr Guthrie dug up the grave and found an empty coffin.

Michael McGuire is credited as “The Head”, rather than Judah Zachery.

Tomorrow: The Trouble with Tulips. 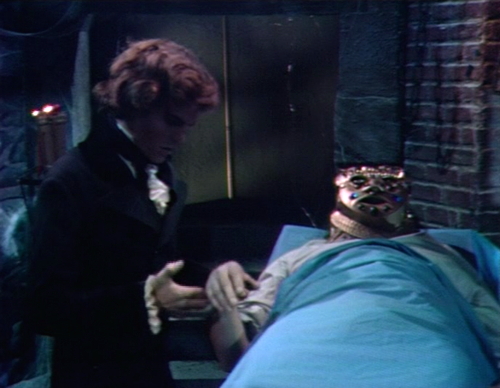