“You know, there’s enough weird stuff going around on this house without you two spookin’ around.”

The spirits that live in the rafters of Collinwood have been more uppity than usual lately. The children of this haunted house, possessed by the ghosts of previous children, have been conducting secret chalk-and-candle rituals in the small hours, trying to bring even more ghosts into the house, and then those ghosts are going to want a turn. This is why everybody talks about immigration reform.

“We could be so happy if Daphne was here with us,” says one of the dreamers. “This house is so different.”

“It’s the same house we once knew,” says the other.

“Oh, no, it’s so strange, so ugly,” says the first. “Do you remember how it used to be, with the candles, and the sound of the spinnet?”

So that’s where I draw the line, really. Nobody asked these people to move in. If they’re not interested in participating in our century, then they can feel free to go back to whatever hell realm they crawled out of.

The sound of the spinnet. I mean, honestly.

But I have to admit: these kids are good at summoning rituals. Out of a clear blue sky, they’ve reincarnated an entire human being, with arms and legs and a dress and a hairstyle and everything. They say that matter can’t be created or destroyed, so I suppose Heaven must be missing an angel.

This is Daphne Harridge, formerly the governess at Collinwood, back in 1840 when David and Hallie were called Tad and Carrie. Daphne was clearly a very efficient governess, and she instilled in her charges the kind of obsessive loyalty that you usually see in doomsday cults, violent dictatorships and Taylor Swift fan forums. Literally the only thing that these kids talk about is how much they want to see Daphne, and they have no other interests or concerns. Apparently their family members didn’t make much of an impression.

So the kids have essentially been doing a long-form public service announcement for the benefit of the audience about how great it’s going to be when Daphne shows up, and now we get to see if she lives up to her advance press. 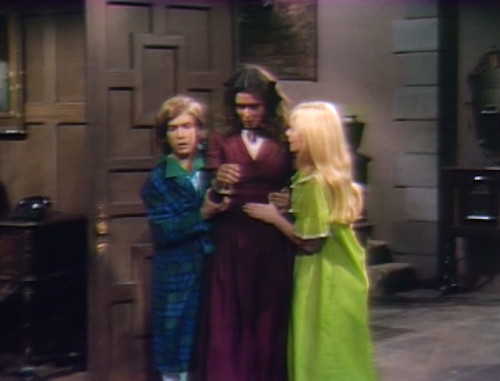 Well, to start with, she loses a couple points on poise; she can hardly stand up or string a sentence together. The kids have to take her by the elbows and lead her offstage like she’s James Brown singing “Please, Please, Please”, except she just got here so I don’t know what she’s so tired for.

Collapsing into a chair, she says “No one must know” a bunch of times, with special emphasis when she looks at David Selby’s headshot, which someone’s artfully framed and placed on an occasional table for this very occasion. The kids start drifting into an E.T. the Extra-Terrestrial fantasy, where they’re going to hide her in the playroom and feed her Eggos and Reese’s Pieces until they think of a decent step two.

“Gerard will decide,” she explains, referring to her abusive deceased boyfriend who likes to violently punish women and children for imaginary slights and still gets to be in charge of the afterlife, because as far as she’s concerned it’s 1840 and there’s no such thing as hashtags.

Then they hear somebody coming in the front door, so the kids stuff Daphne behind the drapes and leave her there for the next five minutes, and if anybody thinks they have a better way to introduce a new character, then they’re welcome to start their own soap opera. This one has it handled.

So this is Kate Jackson! which is very exciting if you’re reading this post in the fall of 1976 or after, because she’s only regular cast member on Dark Shadows who becomes household-name famous after the show ends. For Joan Bennett, the show is post-Hollywood fame; for Jonathan Frid and David Selby, Dark Shadows is the peak; but for Kate Jackson, this is the humble beginning of a career that’s about to take off.

After Dark Shadows and the movie sequel, Kate moved to nighttime TV as a supporting cast member on The Rookies, an ABC cop show where she played Jill Danko, the wife of one of the cops. She was very well-liked in the role, and after a while they started doing Jill-centric episodes, where she gets shot or kidnapped or stalked by a former lover or taken hostage in a prison riot or taken hostage by a professional assassin or taken hostage at the hospital where she works. Jill got taken hostage a lot more than the national average; she was good at it. 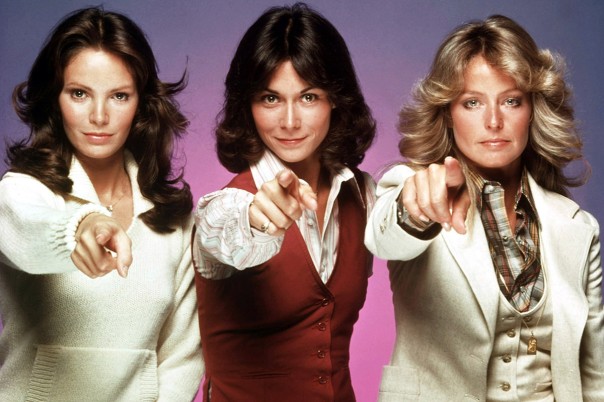 Then Kate was cast in Charlie’s Angels, an ABC show about three beautiful female detectives who worked for a mysterious millionaire who only spoke to them over a speakerphone, for reasons that were never explained in any way. Each week, the “Angels” were sent to work undercover as cocktail waitresses, beauty pageant contestants, fashion models, showgirls, prostitutes, roller derby girls, massage parlor employees and so on — and they’d go undetected, because nobody would expect that these pretty young girls were actually skilled operatives. Also, they wore bikinis a lot.

Charlie’s Angels was the icon of a particularly silly strain of disposable seventies TV, and people loved it and hated it in equal measure. Critics invented the phrase “jiggle show” just to describe it, and if you ask anybody for another example of a jiggle show, they’ll hem and haw until you remind them about Baywatch, and then they’ll say right, Baywatch, and then they’ll start talking about something else. But it was crazy popular at the time, hitting the top 10 and staying there for the first three seasons, making Kate and her costars Jaclyn Smith, Farrah Fawcett and Cheryl Ladd into instant worldwide TV stars.

Kate left the show after a few years and appeared in a string of not-very-memorable movies, but she had another hit in the mid-80s with Scarecrow and Mrs. King, another show about how nobody suspects that Kate Jackson would work in law enforcement.

The reason why I’m jumping ahead in her history like this is that it’s hard for me to step back and look at her objectively, without thinking about the star she’s about to become. I grew up in the 70s, when Charlie’s Angels was a big deal, and I didn’t get to actually see Kate on Dark Shadows until they started showing her episodes on the Sci-Fi Channel in the 90s. So for me, this feels like a Charlie’s Angels crossover, with Sabrina going undercover as a dead governess.

And oh, look how beautiful she is. All worried and menaced, with that hair and that dress, and a charming Alabama twang in her voice as she pleads with her invisible boyfriend to not fly off the handle and start burning things until she’s had a minute to try and execute their hairbrained plan. This is high-quality damsel in distress.

And she’s got a nice little love triangle all set up for her, right out of the box. She thinks she’s in love with Quentin, because she thinks he looks like his identical grand-uncle Quentin, who she used to know back in the day. But she’s also got these mob connections, and she thinks that if she appeases Gerard, then she can stop him from doing something terrible and destructive long enough to do whatever terrible and destructive thing she’d rather be doing instead. “Relationship status: it’s complicated” doesn’t even cover it; this is one more wrinkle away from incomprehensible.

But they look good together, you have to give them that. I mean, Quentin looks good with anyone, but even more so when he’s got a love interest who’s both pretty and an actual actress.

And it’s a doomed romance, which is great, because it’s been a while and we can always use another one. The tragedy here is that he doesn’t realize they’re on opposite sides of the war.

She tells him that she can’t be with him — well, first she kisses him for a while, and then she tells him — and he looks her in the eyes and says, “Why have you come back here, if not for me?” She just stands there and looks pained.

“Is it for the children?” he asks. “Did you come back for them?” And she tries to look him in the eye, because the answer to that question is yes, but not the children he’s talking about. “You’re going to help us? You’re going to release them, they’ll be David and Hallie again?”

And she can’t say it. She wants to, but how do you explain that your plan is exactly the opposite of that?

So she just goes upstairs to the kids’ room and instantly starts arming the bomb that will destroy Collinwood, and scatter the family to the winds.

Quentin thinks that this is an angel, working undercover to bring the bad guy to justice. She’s actually the fuse, the spark that will bring Gerard, and allow him to explode the show. They make it look pretty, so you’ll let it into your house.

Daphne is a crosstime governess, one of the most dangerous creatures in the universe, and you should not let her anywhere near your family history.

She may have soft brown hair and pretty girl parts, but she is a governess. You need to understand that. She is a governess, and she will destroy everything that you love.

In the teaser, Carrie says, “Oh, no, David, it’s so strange, so ugly.” She should have called him Tad. This is a new reprise — she didn’t make that mistake at the end of yesterday’s episode.

In act 2, after Hallie yawns, something falls over in the studio. Then Willie says, “You can bet your bottom dollar I’m gonna tell Barnas about this.”

During the summoning ritual, you can hear someone talking and rustling paper in the studio.

My favorite prop, the Ralston-Purina lamp, is back on the show today, in the study. We last saw it in June, in the Parallel Time drawing room.