“I must not allow him to be let loose in the world again!”

This was supposed to be simple. All Gerard had to do was wangle an invite to his friend Quentin’s house, get the family’s governess to fall in love with him, make sure that he died along with the governess and the two children in the house, wait a hundred and thirty years until there was a pair of descendants who looked exactly like the dead kids, fill their bedrooms with haunted hypnoclothes, force them to perform a ritual in their bedroom that brings the governess back to life, and then force all three of them to perform another ritual, which will bring Gerard back to life. Easy-peasy, mes amis.

But there’s a teensy snagette in this plan, namely: what if Willie Loomis comes in at the last minute and interrupts the second ritual? It turns out even the best-laid schemes o’ mice an’ men gang aft agley; maybe we need to get a couple more mice up in here.

So Willie comes and knocks on the door, and Tad is faced with one of those slice-of-life teenager dilemmas: how do you pretend that you weren’t alone in your bedroom with a girl, performing dark rituals of summoning together?

Daphne dashes behind a screen which was apparently placed in the room for this very purpose, while Tad and Carrie blow out the candles and try to wipe the pentagram off the floor. “We were sleeping, I was sleeping!” Tad calls, but it’s no use. You can’t just roll up a towel under the door and spray some air freshener around. This is Collinwood, people know what sulfur smells like. 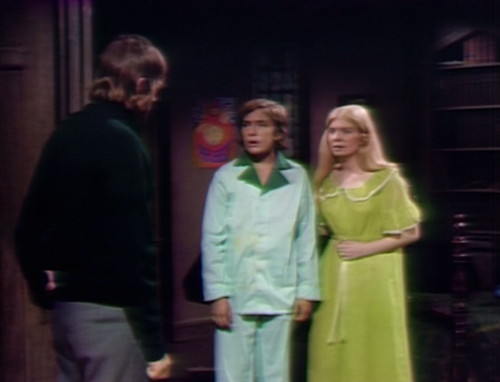 But Willie is threatening to wake up the whole house, so they let him in, and Tad tries one of the traditional Dark Shadows child gambits.

“It’s a game!” he cries, hoping that’ll buy him the two seconds he needs to come up with a better plan.

But Willie can recognize a demonic death-cult meetup invite when he sees one. He has to; at Collinwood, that’s a survival skill.

“Now you tell me all about this black magic stuff, ya hear?” Willie demands, and then Tad smiles, as he gets a repulsive rich-person idea.

He turns to the girl, and chirps, “The man is quite mad. Wouldn’t you say so, Carrie?”

She picks it up immediately; this kind of thing comes naturally to terrible rich people. “Quite, Tad,” she smiles. “He doesn’t know the kind of games we like to play.”

“What an interesting name he gave it, though. ‘Black magic!’ I like that. Don’t you?” 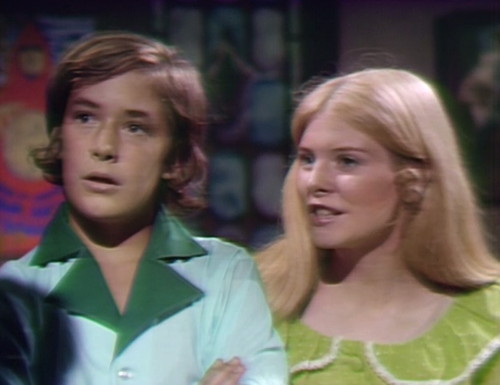 So this is the limit, right here. Any goodwill that the audience might have towards the poor dumb dead kids is gone forever, thanks to a spot of old-fashioned class warfare. Willie is one of the pitiable common people, and Tad and Carrie can push him around, looking him straight in the eye and telling him that he’s stupid and has bad manners.

“Now you cut this stuff, do you hear?” Willie splutters. “You level with me.”

“What curious expressions he uses,” Carrie third-persons. “Honestly, Tad, could you ever ‘level’ with anyone?”

Tad keeps up his unbroken insolent eye contact. “Oh,” he says, “I don’t believe I’d know how.” These people are the worst.

Now, what they don’t know about Willie is that he’s buried more mangled bodies than they’ve ever seen. He kept house for a Dracula, and babysat a Frankenstein. Ghost-hosted millennials mean nothing in his life.

“I’m gonna take ya to Barnabas,” he growls. He has no time for backchat from the brat pack.

Tad draws himself to his full height and says, “What makes you think that you have the right?”

“The fact that I’m bigger than you,” Willie snaps, and then he grabs hold of the kid, and pulls.

So I hate these kids even more than I thought I did, which was plenty. There really is evil in this world, and it’s one-percent children. Daphne says that she loves them, and that does not reflect well on her judgment. She is currently involved in a cross-time caper to resurrect a wicked pirate king and his zombie crew, which will bring about Ragnarok and the excruciating death of all life and matter in the universe, and I’m basically fine with all of that. Loving these kids is worse.

“Why don’t you go and try to look for your friend Barnabas?” says Tad, from the couch. Willie tells him to pipe down, and Tad whines, “Well, are we going to wait here until he arrives?” Apparently all this fuss is getting in the way of his fourth-dimensional social schedule. 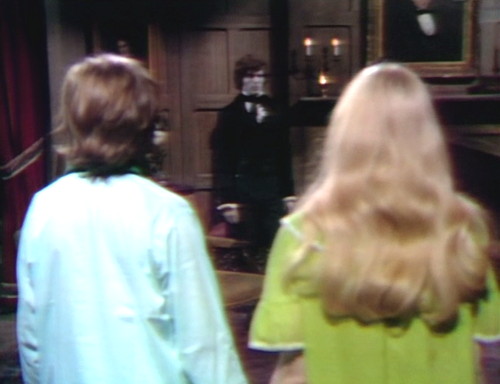 But Willie gets called out of the room by another storyline, and then, at last, my hero appears: the furious phantom, Gerard Stiles.

“It wasn’t our fault!” Carrie cries, because they’re rich kids, and nothing ever is.

“It was Mr. Loomis!” offers Tad, instantly throwing the servant under the bus. “If there’s anybody for you to be angry at, be angry at him!”

Gerard doesn’t care. He doesn’t need a reason to hurt these children. It comes naturally to him, he likes it. Gerard Stiles is a savage shriek of pure anger, released from the limitations of flesh and bone, and solidified into fists and sneers and unprompted tortures. He is a flaming hot nugget of bad vibrations, expelled into the world by demonic forces beyond our understanding. And I love him. Oh, how I love him. 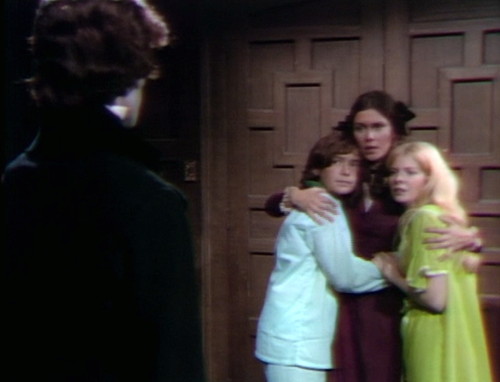 But here comes Daphne again, unasked-for as usual, and she shelters the children under her rapidly-fading power to protect them. She says that they can’t perform the ceremony again tonight, because the stars are out of position, an obvious lie that doesn’t mean anything in particular. She pleads with Gerard to give them another day; they’ll try again tomorrow night.

He flares his nostrils and vanishes without saying goodbye, like the baller he is. His child threatening is over, for the evening. Total success. 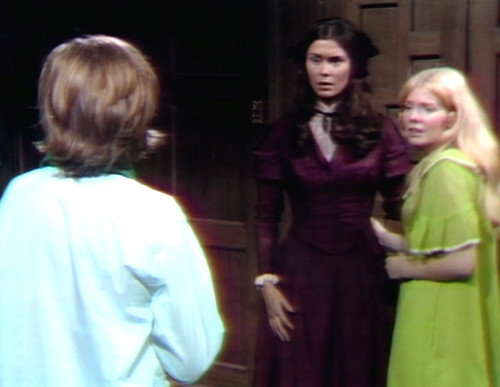 The scene goes downhill from there. The kids start mewling about finding Daphne a place to hide, and she says that she has somewhere in mind. She hesitates to tell them where it is, even though they’ll have to meet her there tomorrow night, because once again nobody in this crowd can think all the way to step two.

“I don’t want Quentin to know,” she says. “He knows everything, except about Gerard and my hiding place. You mustn’t tell him!”

Daphne approaches, and in a low whisper, she says, “I’ll be in Rose Cottage. You’ll come to me, when night has fallen.”

So, wow, no duh. Obviously, you’ll be in Rose Cottage, it’s the only place we’ve ever seen you outside this house. It is literally the first and only place that Quentin would look, if he cared, which at this point would be hard to believe.

And she can’t hide from Gerard there, either. You can’t shake a thing like Gerard; he’s incurable. He will appear before you, eyes aflame, and grab you by the throat. He will make you regret whatever it was that you did that brought him into your life. All he knows is hate and spite and fire. He is the only relatable character on the show right now.

After Daphne picks up the photo of Quentin, the camera on her goes out of focus for about five seconds.

Daphne tells Tad and Carrie, “You must go! Go back to Collinsport!”