“I thought I had removed the life force completely, but apparently not.”

The vampire rises from his crypt, murder on his mind. Someone has intruded on his private sanctum, and she must be destroyed.

“So you’ve found me out!” he growls. “It will be the last thing you’ll ever do.”

She backs away. They always do — the doomed ones, the prey — scuttling towards the wall, squeaking, searching for the magic words that will make this nightmare stop coming true. And then the interloper says the one improbable thing that could flip the script on the oncoming train wreck.

So this is going to take some explaining. We’re deep in the wilds of Parallel Time, a complex audience-gaslighting scheme in which all of the Dark Shadows characters pretend to be different people with the same names. It’s an extended April Fool’s gag that started on March 30th, and it’s still going strong, all the way out here in late June.

In this concurrent band of time, Julia Hoffman is a violent domestic, a Danvers-style devotee of her high-glam employer, the late Angelique Collins. The she-witch has risen from her grave, and is currently doing business as her own twin sister, endangering all who live on the great estate. Parallel Hoffman is Angelique’s confidante, co-conspirator and personal vampire slayer, and she’s recently learned that Barnabas sleeps in a coffin in the secret room behind the bookcase in the Old House, which is where we currently are.

Hoffman comes to the party with a hammer and stake. She’s sworn to protect her twisted mistress at any cost, even if it means getting fatally clocked on the head with a fire iron by a parallel-universe double who steals her clothes and leaves her lying dead on the bare floor, naked and head-smashed. So guess what happens.

Luckily, Barnabas has been living this kind of life for years now, so he’s used to having people from the past pop up in unexpected forms. He listens to Julia’s tale about the room and the premonition and the stake and the fire iron, and then she points down at the blood-curdled corpse on the linoleum, and everything’s fine.

“You did this for me,” he sighs, and approaches her with a smile. “Thank you, Julia. I’m grateful to you again.” She flutters her eyelashes at him, because murder always brings people together. Then they have a terribly urgent conversation for thirty seconds, standing two and a half inches apart and making unbroken eye contact.

He wants to get her back to her own time, but she brushes the idea aside. “Do you think I would leave? No, you need me here! Angelique thinks that I’m her Hoffman. I can find out all about her plans, before she starts them.”

He tries to talk sense to her, but she’s determined to stay right here in the wrong universe, and assume the identity of her evil twin. This kind of thing is probably happening behind bookcases all the time. You should check yours periodically, just in case. 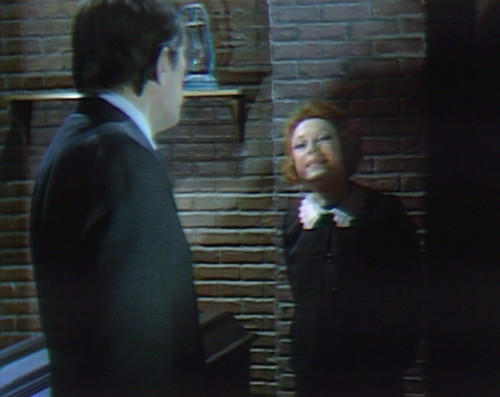 “Barnabas, I will stay here, I will keep to this plan!” she announces, and then turns away with a childish grin. “Perhaps I like being a spy,” she explains. “I always wanted to be. Who hasn’t?”

And then she gives him a smile that she must have got off Jack Nicholson’s Joker when he wasn’t looking. This is clearly mental illness played as heroics. What is she talking about?

But this is Dark Shadows, red in tooth and claw, and if the mythopoetic trickster figure wants to dress in someone else’s skin and steal fire from the gods, then I guess it’s bad news for Br’er Fox, the Sky Father, Elmer Fudd or Parallel Angelique, as applicable. 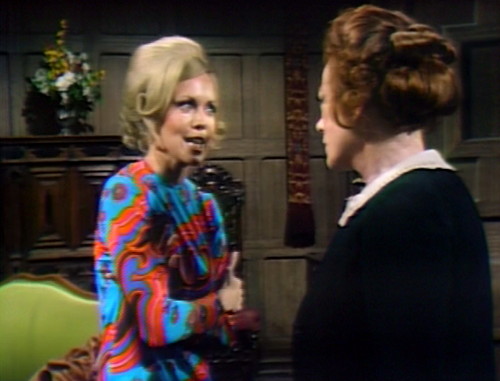 So here’s Special Agent Julia Hoffman from the Federal Bureau of Instability, reporting for work at someone else’s job. And luckily, Angelique is off on one of her weird hate jags, where the crazy just tumbles effortlessly out of her mouth.

“I know my murderer, Julia,” she declares. She doesn’t, really. She knows that the doctor found evidence of foul play in the autopsy and assumed the murderer was Quentin, but the doctor, as she also knows, had several screws loose, all in mission-critical places. This might be the only example in supernatural fiction where a murdered spirit returns for vengeance and doesn’t have the faintest idea who their murderer actually was. It’s not a widely-used trope, because it makes everyone look foolish, including the writers and the audience.

Superspy Julia asks what she’s going to do about it, and Angelique indulges in a bit of dramatic clarification. “Everything, dear Julia,” she crows. “Everything.” This is not actually an answer to the question.

“Oh, I have so many plans,” she says, “and each one is better than the last!” I hope she waits long enough for a good one to come along; Angelique’s baseline for quality is not high. 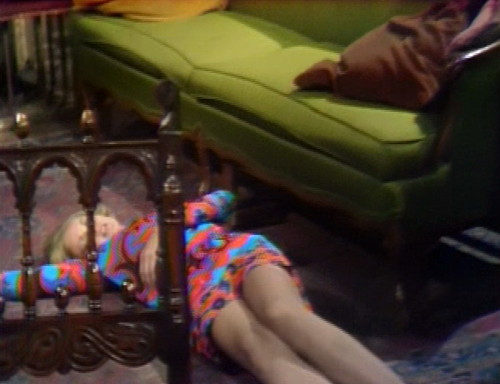 Suddenly, Angelique feels faint and drops to the floor, unconscious. Well, I guess that solves that problem. Julia Hoffman is the most successful spy in the history of espionage.

The witch rallies enough to tell Julia to go find her father, who knows how to keep her life force operational. Of course, Julia doesn’t know what to do — this wasn’t covered in the briefing — so she has a rare moment of doubt.

“Her father,” Julia thinks. “What does she mean? I don’t even know where he lives!” Suddenly, there’s a breakthrough — “The phone book!” — and we’re back on track. You can’t keep Julia baffled for long.

When Julia arrives at Parallel Professor Stokes’ place, she finds the chemistry-wizard jamming fluids into the lady in his back parlor. He immediately launches into a conversation about his crackpot mad science experiment, which luckily happens to be within Julia’s area of expertise. She’s certainly more qualified for this conversation than she is for being a housekeeper. Ask Julia to get a stubborn stain out of the carpet and she’s essentially nowhere, but she’s been plugging dead bodies into electrical sockets for years.

“She did tell you about the body, didn’t she?” asks Stokes.

Julia plays for time. “She was so vague,” she says, “I’m afraid I don’t really understand.”

“Neither do I,” Stokes shrugs. “I must check the body, I was trying to calm it when you interrupted me.”

He heads for the back parlor, and Julia follows, unable to believe her luck. They’re giving people sedatives! 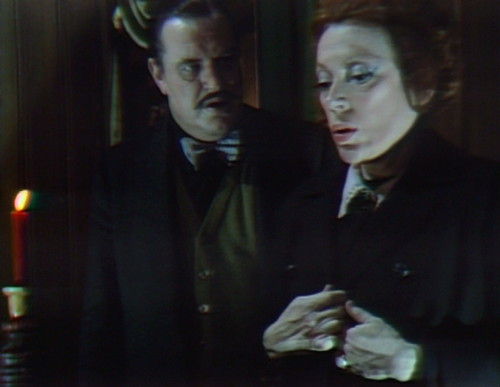 In the back room, they arrange themselves around the body on the slab, and Julia deftly extracts the narrative. Observe the technique.

Stokes:  A corpse! That’s what you’d think, wouldn’t you? But we know different. The one thing I overlooked was the strength of the continuing will to survive. Even now, she still struggles to regain her life force. How incredible the human spirit is.

Julia:  What do you mean, struggles to get back?

Stokes:  She wants to be alive, to walk and talk as we do!

Julia:  But you’ve — taken her life force away?

Stokes:  Come, Hoffman, don’t pretend to be surprised! Surely Angelique told you that her existence depends on the life force of another!

Stokes:  I thought I had removed the life force completely, but apparently not. When she uses her will, poor Angelique becomes as she was when she sent you here.

Julia:  But if anything happens to the body…

You see what I mean? Julia Hoffman has been a secret agent for seven minutes, not counting the station break and a commercial for Salvo Detergent Power Tablets. Look how great she is at this!

All she does is stand there and say “I’m afraid I don’t understand,” and presto, she gets the complete schematic for the Death Star, including the unshielded thermal exhaust ports. Barnabas has been battling Angelique for weeks with no measurable results, and here’s Rogue One, who takes down the Empire with a phone book and a smile.

Tomorrow: Barnabas, Julia and the Lady in the Back Parlor.

Barnabas tells Julia, “No, but it — nothing could be more dangerous for you!”

In act 2, Julia has to run from the Collinwood set to Stokes’ house for the next scene. As Stokes goes to open the door, we can hear her running to the set, and then she cries out, “Ooh!”

When Stokes shows Julia into the parlor, a camera gets into position behind the beaded curtain, and we can see and hear the cameraman moving the beads out of the way.

Angelique says to Julia, “Are you sure… You know my father so well, are you sure he was telling you the truth?”

Julia tells Barnabas that Angelique won’t miss the key she stole: “She has it only in her drawer, and keeps it for emergencies.”

Tomorrow: Barnabas, Julia and the Lady in the Back Parlor. 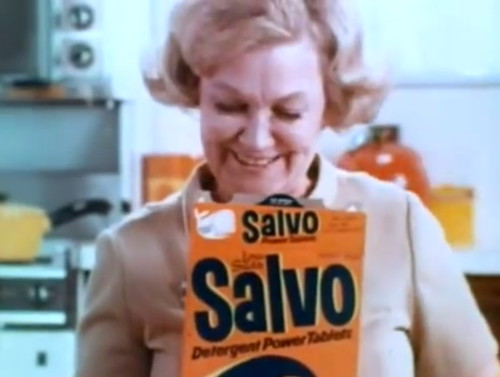