“It never ends, does it, when one begins to unravel evil?”

Angelique’s dad owns a lady that he keeps lying on a table in the back parlor with a sheet over her, and about 95 percent of her life force is being projected, apparently through WiFi, to keep Angelique upright. This is an approach to grief that Kübler-Ross never saw coming.

But Angelique’s dad is some kind of brilliant crackpot voodoo science futurist, like Nikola Tesla running a psychic hotline. It’s all done with injections and candles somehow. I don’t know how he landed on this lady in particular.

So if Barnabas and Julia want to stop Angelique, which they do, then they have to deal with this weird setup. There isn’t any visible equipment attached to the lady on the table, so there doesn’t appear to be anything to unplug. Maybe they could jiggle her and look for an off button.

“So another innocent must die,” he groans, and Julia says, “Barnabas, I know what you’re feeling, but she’s not really alive,” which is debatable. Then she pulls a knife out of her purse and hands it to him, so he can stab a human being to death while she watches. In other words, it’s another Collinsport house party; this is why I never invite people over.

Barnabas raises the dagger as Julia pulls back the sheet, and all of a sudden there’s an issue.

Seeing him hesitate, she asks, “Barnabas, what is it?”

“She’s so beautiful!” he says, and Julia thinks, Oh, for fuck’s sake. Not this again! 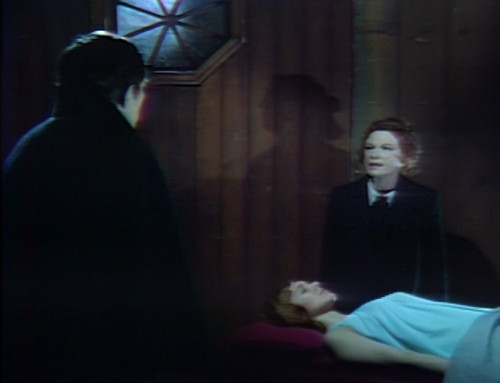 Barnabas has been crush-hopping with every new twist in the storyline over the last year; in the twelve months between June 1969 and June 1970, he’s been interested in Rachel, Kitty, Regular Maggie, Parallel Maggie and now this new lady. That’s a new woman every two and a half months. With the others, he at least had the excuse that they were all played by the same actress, and therefore were possible variations on Josette, but this new one is just pretty and immobile, which is apparently how he likes them. 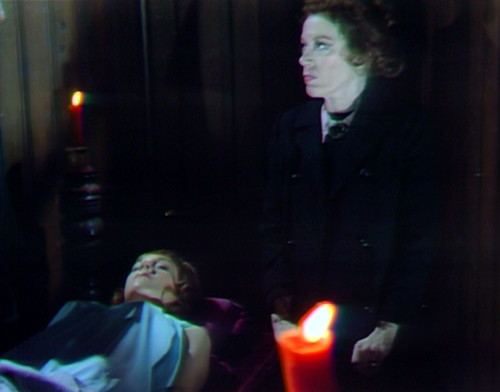 He tries to rationalize by waxing philosophical. “In a world where there’s so much ugliness,” he declares, “have I the right to destroy her?” Obviously, this is another example of Dark Shadows’ ruthless morality; if this girl wasn’t pretty, she’d be dead by now, and good riddance.

Julia tries to talk sense to him, which never works. She says, “Whatever you feel condemns everyone at Collinwood to more of Angelique’s plots!” This is basically a description of the entire show from November 1967 on.

He says that he’s determined to bring this lady back to life, so that he can talk her into being a reincarnation of Josette somehow. Julia glares, “As we delay, whatever happens at Collinwood is your responsibility.” This is usually the case. 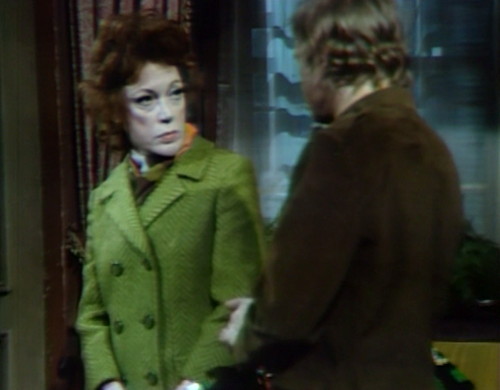 So the interesting thing here is that this is the period of the show when Julia’s love for Barnabas becomes part of the conversation, at the same moment that Barnabas’ random ingenue fever reaches its pointless peak.

On Monday, when Julia conspired with Parallel Will at the Old House, she said that she didn’t want to leave Barnabas in this alternate dimension. Will said, “I think I understand,” and Julia shot him a frigid look.

“As a doctor,” she said, “I’ve been interested in Barnabas for a long time.” She wasn’t fooling anyone. Her once-upon-a-time subtext has openly become part of the text, and everyone can recognize it instantly, even when they’ve just met.

This makes her more powerful — she can casually interrupt the storyline in a way that no other character can, because she’s so closely aligned with the main character. But even Julia can’t keep Barnabas away from the tedious ingenues.

Barnabas and Julia are the most important supercouple on the show, whether that’s explicitly romantic or not. For the last three years, he’s been hopping from one doomed romance to another, but his only real connection is to Julia.

Vicki’s long gone, Angelique keeps marrying random handsome dudes, and Josette kills herself over and over, trying desperately to convince him that he needs to move on. You don’t see Kitty Hampshire suddenly bursting through the time rift to whack threatening housekeepers, and when Peter’s ghost appeared in 1970 to reveal Vicki’s tragic destiny, he delivered the news to somebody else. Barnabas never found out what happened to Vicki, and that was such a non-issue that it didn’t even occur to me until just now.

But here he is, pulling the lever on another random slot-machine romance, and if you’re looking for ironic symbolism, you couldn’t find anything better than this. He’s now being romantically linked with a complete stranger who hardly has a pulse.

They don’t announce that he’s in love with her yet, of course, because it’s only been a couple minutes and even Barnabas can’t work that fast, but the rule of televisual narrative that we’ve learned to accept is that an unattached male character will automatically be romantically paired with any unattached female character who happens to appear in the same shot. This works even when the female is unconscious.

So that means Barnabas has magical lady-wakening powers, and he’s attuned to whatever frequency she’s emitting.

“I know that her mind sleeps, as the rest of her does,” he opines, “and when she wakes, she will be the same as she was before Stokes did what he –”

He breaks off, and looks up in wonder.

And yeah, dude, we know. You moved them. You’re holding them in your hand right now.

Julia is “too old” for Barnabas, apparently, or not pretty enough, although when you get right down to it, he’s too old and not pretty enough for the parade of young girls they keep wheeling past him. They never love him back; after 1795, every woman from Vicki on has another suitor who they would be perfectly happy with. If he left them alone, they’d go and marry Jeff, Joe, Tim, Edward and Quentin, which they were planning to do before Barnabas came along. They would be fine.

But he always returns to Julia, his after-life partner, who runs to the rescue no matter how many blank slates he decides he’s in love with. There’s no way to resolve this tension, which is good, because resolving things on Dark Shadows usually means that somebody falls off a cliff. Widow’s Hill is where the happy endings go to die.

Barnabas begs the girl, “Speak to me! Tell us who you are!” But she can’t, because she isn’t anyone. She’s just the pretty lady on the table, served up like the next course on a tray.

The only one who actually speaks to him is Julia, urging him to disappear before he’s caught drooling over today’s special. And he leaves in a shimmer of Chromakey, as he always has, and always will.

As you can see in the second picture in this post, the back parlor set wasn’t really made to be shot at that angle. There’s a bare section of drywall above the door which doesn’t have any wood paneling.

In the teaser, when Barnabas says, “So this is the body that has made Angelique live,” somebody offscreen coughs.

Julia says, “I feel as sorry for this girl as you do.” Barnabas replies, “Sorrow isn’t all what I feel!”

Barnabas tells Julia, “You can hum here — come here any time you like!”

Roger says that Cyrus has named him as the executive of his estate; he means executor.

Angelique tells Bruno that someone is interested in him: “someone at the main house… someone who is much more innocent than she seems.” She means less innocent.

This is Donna Wandrey’s first episode as Roxanne; she’s listed in the credits, although she doesn’t have a speaking part and nobody on screen knows her name yet. This is her first TV credit.

In The Dark Shadows Companion, Wandrey contributed her memories of the audition: “It was the first real thing I did on TV that lasted longer than 60 seconds. There were two blonde women with gorgeous long hair to my left, and two dark-haired women on my right. And here was this short-haired redheaded thing in the middle. After we had read, we were asked why we should get the part. I though, well, I can’t just say I want to work. I went to school. I hadn’t done really anything that was important. And everyone else said very serious things. I thought, OK, you’ve blown it by now, you might as well go for it – and I said ‘Because I have short hair and there aren’t many short-haired women working in TV.’ I was cast the next day.” So that’s how that happened.

Also, a props moment: when Roxanne’s eyes open, it’s implied that she’s seeing through Angelique’s eyes — and the first thing she sees is my favorite prop, the Ralston-Purina lamp, which is featured in the drawing room today.

72 thoughts on “Episode 1039: Barnabas, Julia and the Lady in the Back Parlor”