“I’ve just been thinking about the things that have been happening around here — not just to me, but to everyone!”

The audience applauds, as Kermit the Frog takes the stage. “Tonight, we’ve got a real treat for you,” he promises, “because our very special guest stars are that world-famous knife-throwing act, Lesley and Warren!”

Then a woman walks onstage to correct him, and the penny drops.

“Wait a minute,” says the frog, “you’re not Lesley and Warren, you’re Lesley Ann Warren — the actor, the dancer, the singer!”

“So, how come you’re doing a dumb knife-throwing act?”

Lesley shakes her head. “You know, Kermit, I thought you were the one person on this show who wasn’t crazy.” 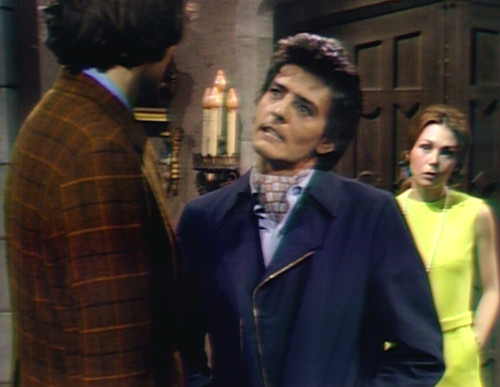 Which brings us to Maggie Collins, the purported mistress of Parallel Collinwood, who’s supposed to be the sane one but look who she hangs out with.

Maggie has just returned from a stint at crazy-person sleepaway camp, where her close friend Cyrus dressed up as a mustachioed madman and tried to get her to fall in love with him. It didn’t work.

Now she’s alone in the house with her erratic and explosive husband, an undead ice witch, and a criminal-minded composer who’s currently trying to extort money in exchange for evidence in a murder investigation. Not the murder that he committed, of course; this is a different murder. Maggie’s going through a rough patch in the area of not interacting with lunatics.

The traditional way of looking at this story would be to say that Angelique and Bruno are the villains, and Quentin and Maggie are innocent victims of their wicked manipulation. But there’s a difference between a victim and a volunteer, and Maggie keeps re-enlisting.

For example: a little over a week ago, Maggie ran from the house in fear and frustration, because she was hearing voices of the dead, and her husband was not supportive about it at all.

Quentin has heard the voices of the dead himself, several times, up to and including six weeks ago, when the spirit of Dameon Edwards taunted him into hanging himself. But Quentin didn’t think that was relevant to the current situation, and he accused Maggie of making things up.

“Quentin,” she cried, “are you in some sort of conspiracy against me, trying to drive me mad?”

“How dare you say that!” Quentin shouted, and then she ran out of the house and got kidnapped.

Now, the kidnapping part was not Quentin’s fault, but the rest of it was. These issues have not been resolved in any way. 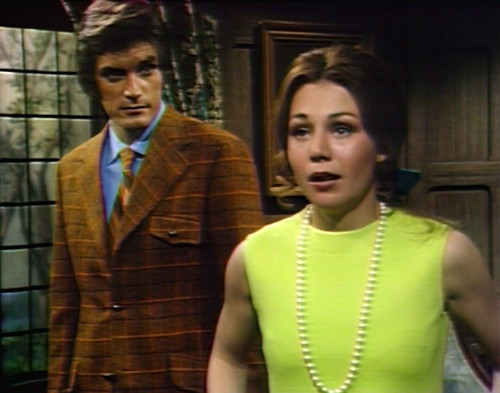 Post-kidnapping, here’s Quentin’s version of an apology: “Look, I’m sorry that I reacted the way I did to your disappearance. If I’d been as calm as Barnabas was, then I would realize that you hadn’t run away.”

This is a decent start — I didn’t realize Quentin even knew the phrase “I’m sorry” — but it doesn’t address the underlying issue of why Maggie ran from the house in tears in the first place.

But Maggie keeps on volunteering, so she says, “Quentin, please, it’s all over. Let’s forget about it.” People are always saying that after hostage situations.

Quentin asks, “Am I forgiven?” and Maggie says, “Yes, of course.”

“You know, you don’t say that as if you really mean it,” he says, and oh my god Quentin why are you so bad at being a husband?

But let’s look in on the other two mental cases in the house today: “Alexis” and Bruno, who are examining a journal that Bruno found while he was trying to steal money from Cyrus’ safe.

On the cover of the journal, Cyrus had written, “PRIVATE — in the event of my death, this is to be presented unread to my friend Quentin Collins”. I don’t know who Cyrus thought would discover this journal, but considering the high rate of mental instability in his social circle, he probably should have thought about a stronger deterrent than writing the word “PRIVATE” in capital letters. For one thing, he could have given it to a lawyer, if there are any left that haven’t had the life force sucked out of them.

Inside, Bruno discovered a note which reveals who murdered Angelique, Quentin’s first wife. In fact, Angelique has secretly resurrected herself and now lives at Collinwood pretending to be her twin sister, so it’s kind of a no harm-no foul situation in re: the murder, but Angelique is still taking it personally. I guess I can’t blame her for being curious.

So Bruno approached “Alexis” with the journal, and five thousand dollars later, here she is, reading it. 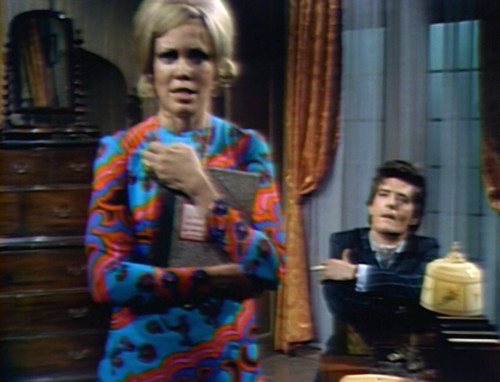 I have on this night committed a great wrong, as a human being and a doctor. You will never know the agony I have suffered since the seance. You see, Quentin, I know the truth. I know that Angelique was murdered tonight… and I know that you murdered her!

When I examined the body, I discovered the hatpin that you’d lodged in the base of her skull while the lights were out. Everyone at the seance saw you with your hands around her throat when the lights came on again, but only I knew what really happened.

So, the hatpin. I’m going to go ahead and assume that it’s actually possible to murder someone by thrusting a hatpin into the base of their skull, no matter how unlikely that seems. My question is: Where did the fatal hatpin come from? Who even wears hats that need pins? We’ve been in this parallel band of time for months now, and I don’t think I’ve seen a single hat.

Only moments ago, I signed the death certificate stating that Angelique died of a stroke. You may ask yourself why I chose to do this. I knew that certain events at the seance had hurt you deeply, that you had worked yourself into a rage — a wild, jealous rage.

… and then you went and found a hatpin. Why is he not considering the practicalities of this? Quentin already had two hands around Angelique’s throat. Where was the third hand he needed, to procure and manipulate the hatpin? Could you even do that, in the dark, with one hand, while the victim was struggling to breathe?

And in that terrible state, you had killed her without knowing what you were doing!

That is probably the most cracker-barrel statement in this whole account. Quentin didn’t know that he was skillfully concealing a hatpin? How could that possibly happen, without knowing what he was doing? I don’t know, maybe Angelique had a stroke after all, and the hatpin in her skull was just a coincidence.

You are not an evil man, Quentin, and I know you deeply loved Angelique. God forgive me for taking it upon myself for being your judge and jury.

So that’s great. That’s Dr. Cyrus Longworth, human being and doctor. By the way, Cyrus was running a research project looking into the nature of good and evil, but it doesn’t seem to have gotten him anywhere.

Anyway, Angelique obviously finds all of this quite disturbing, and she vows to take her revenge on Quentin. Her revenge-against-Quentin plan turns out to be exactly the same as her make-Quentin-fall-in-love-with-me plan. 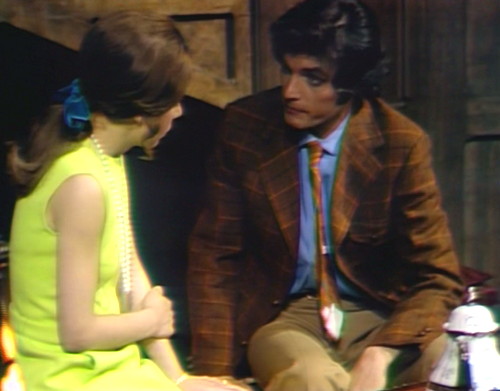 Okay, back to the newlyweds, for some more volunteer service. Maggie is sitting by the fire, thinking things over, and Quentin stops by to explain once again why he disagrees with every single thing that she ever says.

Quentin:  What are you thinking about?

Quentin:  Now, it won’t do any good to keep thinking about that.

Maggie:  No, I’m not reliving the experience, not at all. I’ve just been thinking about the things that have been happening around here lately — not just to me, but to everyone! I was wondering if Cyrus might be responsible for it all.

And speaking of impossible, is there any point in these chronicles where Parallel Quentin allows Maggie to complete a thought, before he lectures her on how wrong she is?

Maggie:  Quentin, think about it! Think how wrong we were about him!

Quentin:  Listen, what happened was the result of Cyrus’ insane experiment. He only became evil after he became Yaeger!

Which is just … wait, what?

Maggie:  But, Quentin, Yaeger and Cyrus were one and the same man, with two different personalities! Isn’t it possible that, as Yaeger, Cyrus could have done these things?

Quentin:  Oh, anything’s possible. But why would Yaeger want to destroy our lives?

Ummm, maybe because that is exactly what he was trying to do? He wanted to break up their marriage, so he could swoop in and steal Maggie.

Maggie:  Cyrus was a very inhibited man. It’s possible that underneath, he harbored some deep resentment toward us all.

Quentin:  I don’t buy that.

Okay, seriously, do you actually listen to what Maggie says, or are you just running through the thesaurus in your head to find another synonym for “you’re wrong”?

Quentin:  We all know that there was something wrong with Cyrus. But too many different things have happened to us recently! If he was responsible for all of those things, he wouldn’t have had time to do anything else!

Which is so ridiculous that I can’t even refute it. What are you talking about? How is it possible that you’re having this conversation on television? 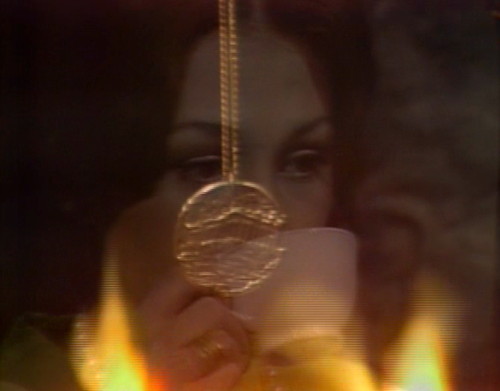 So it’s actually kind of a relief when Angelique casts a magic spell that puts Maggie under her hypnotic control, getting her to stand up, walk to Angelique’s room, steal a chain and then pretend to practice witchcraft in front of Quentin, who screams that she’s the witch responsible for destroying their lives.

I mean, at least we know that during this sequence, Maggie’s under Angelique’s control. I wonder whose control she’s under the rest of the time?

Tomorrow: The Spy Who Loved Me.

When Angelique eavesdrops outside the drawing room, a boom mic hovers over Quentin and Maggie.

Maggie trips on a step when she walks upstairs.

Tomorrow: The Spy Who Loved Me.

61 thoughts on “Episode 1037: The Things That Have Been Happening”