Ben Cross can’t do it, Johnny Depp can’t do it, Alec Newman and Andrew Collins can’t do it. I love ’em all, except for Ben Cross, but nobody, I mean nobody, can be Barnabas Collins except Jonathan Frid.

I will now demonstrate, using a three-round prizefight between Count Dracula and common sense. 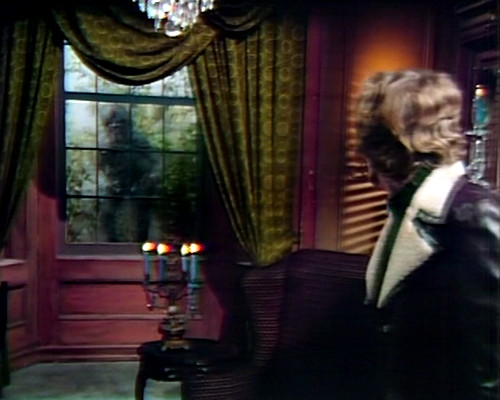 Round One: Werewolf vs Space Octopus

The story so far: ancient killer space octopi from before the dawn of time have been locked in battle with werewolves — their only natural enemies — for countless millennia. Seriously, werewolves. No, I don’t know how that happened. All I know is that werewolves have a hard-on for hurting Leviathans, and I for one am not going to stand in their way.

So now tentacled teen emperor Jeb Hawkes is being hunted by local lycanthrope Chris Jennings. It’s possible that the werewolf is reacting instinctively to the sight of its age-old foe, but this is the way werewolves usually act anyway, so it’s hard to tell.

Jeb has taken refuge in the Old House, which isn’t a great move, because the security system at this rickety haunted house is slipshod at best. Jeb needs to spend less time shouting for Barnabas and more time getting that iron door that leads to the basement between him and the snarling assassin on the front porch.

Ker-rashing through the window and exploding into the living room, here’s Jeb’s nightmare in living flesh and claw and fang. Jeb tries to shove the wolf away into a nearby chair, but the animal leaps back up and vaults over a stray end table which was obviously placed there for this specific moment. They’ve taken most of the furniture that they care about out of the room so it won’t get damaged, but there’s still lit candles all over the set because nobody really cared about basic workplace safety in 1970.

As always with these loosely-rehearsed stunt spectaculars, they just turn on the cameras and hope for the best. Yes, Jeb tosses the werewolf into the broken window glass, yes, the carpet in the hallway slides around, and yes, big brass coatrack and more candles. It’s called show business.

The wolf grabs Jeb before he gets to the door, so he dashes up the stairs and tries to kick the monster in the chest. It doesn’t work very well. Jeb goes down, with the creature standing above him, and the werewolf winds up and delivers a powerful backhand SMAKKK across the kisser, and Jeb tags out. Check and mate.

But the werewolf has troubles of his own; earlier in the evening, he was shot in the gut during an unrelated dispute. Once Jeb is laid out pretty on the stairway, the wolf remembers that he’s hurt, and he staggers around the room looking for a clean spot to fall over backwards on and turn back into a guy. End of round one. 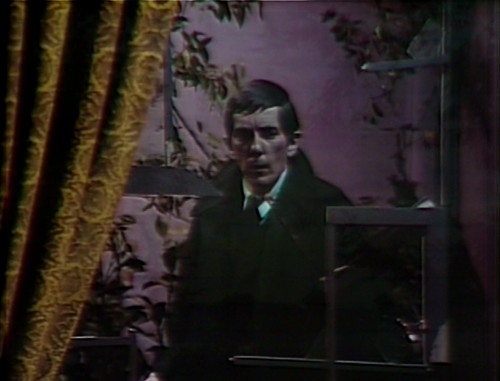 Round Two: Vampire vs Explaining Things

Once the sun’s up, Barnabas comes home, and he does a lovely little what in the hell take where he notices the remnants of what used to be part of his house. There is maybe a thirty percent chance of this happening every time he comes back from an evening out; that’s one of the downsides of an active lifestyle. 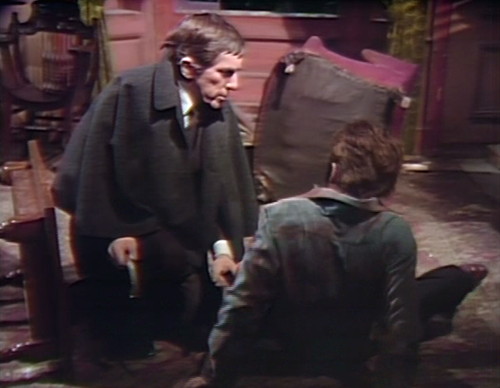 The first thing he sees is Jeb sprawled out on the staircase, and he quickly checks for vitals which it’s possible that Jeb’s species doesn’t necessarily have. Then he hears Chris moaning on the hearthrug, and finds there’s another unexpected guest to attend to.

What separates Jonathan Frid from anyone else who could play this role is that he instantly snaps into action without a moment’s hesitation or surprise. There’s a blood-spattered beast-man lying in the wreckage of his former decor, and Barnabas wastes exactly 0.0 milliseconds wondering what led up to this particular instance of interior destruction. He just kneels down, and starts shaking Chris’ front paw.

Barnabas:  Chris, can you hear me? Open your eyes, and look at me!

Chris:  Barnabas? Where am I? Oh my god, what have I done?

Barnabas:  Be quiet, and listen to me. Can you get up on your feet?

Barnabas:  Let me help you. We’ve got to get you out of here!

And then he just pulls on Chris until he’s vertical, and frog-marches him towards the door. 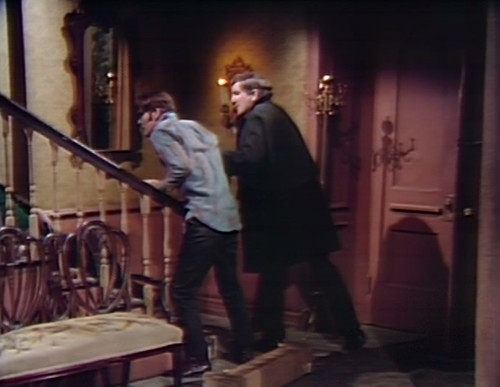 And I swear, I don’t think that anyone else could do this. Frid has this gorgeous gravitas that somehow makes it all seem like sense. In pensive mood, he can sometimes drift into mopey, but a moment of dramatic urgency like this is exactly what Frid does best. He’s escorting a wolf man out of his house before the slime god in the stairwell comes to, and there is no doubt in his mind about whether this is an appropriate course of action. He has determined his objective, and he is executing on it.

Chris tries to linger by the stairs, asking, “Barnabas, did I kill this guy?”

“He’s alive, he’s all right,” Barnabas says, pulling the guy by the elbow.

“Never mind, keep moving!” And then he basically shoves Chris out the door, and closes it behind him.

On the porch, Chris asks, “Did I kill anybody else?”

Barnabas’ reply: “I don’t know, I’ve been looking for you all night. I only found you just now!” He sprints through the “I don’t know if you killed anybody” part of the conversation, because who even cares, we have business to attend to.

Chris asks, “Why do you keep protecting me?” and Barnabas is ready for that one too: “Because you need to be protected, from him!”

“What are you talking about?”

“I can’t explain now. Just go to your house, and get some fresh clothes, and come back here later on. I’ll explain everything to you then. Now, do as I say, Chris!”

And then he pushes Chris off the set, end of round two.

Round Three: Jonathan Frid vs Dialogue

Then Barnabas spins straight back inside and rouses Jeb, who scrambles to his feet and tries to figure out what’s going on.

Barnabas shouts, “It’s all right, the animal is dead now!” and instantly takes control of the entire scene. Jeb is frightened and angry and confused, and Barnabas Collins is a chilled steel mendacity machine.

Jeb says Barnabas should have been here to protect him, and Barnabas fires back, “I think that is a most unfair thing to say, considering that I saved your life!”

He’s not reading off the teleprompter, by the way. Frid’s got a good number of lines to deliver, quickly and forcefully, and there isn’t a hint of Fridspeak in sight.

“I came in the house, and you were lying on the stairs! He was coming at you to kill you, and I drove him off!” Jeb asks how, and Barnabas brandishes his cane. “I had this. The head is made of silver; I beat him with it! If it hadn’t been for me, you would have been dead by now.”

I mean, at that point, yes, he peeks at the teleprompter, and there’s a couple more minor incidents during the rest of the conversation, but the point is, he got this far because he knew this sequence was exciting and important, and he needed to get at least 85 percent of the way through it on his first try. 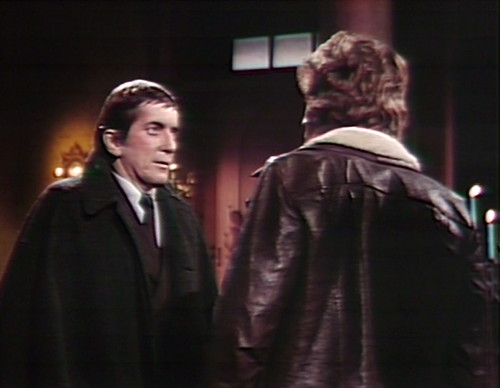 This storyline is insane, absolute barking madness, with several spring-loaded plot points popping off in all directions. Half the show is engaged in an improvisational deep-cover double-cross against the other half, with no clear exit strategy.

But Jonathan Frid is the calm center of this storm, the only man with the innate bonkers authority to tame this wild beast. He can make this sequence work, and I don’t think anybody else in the cast could. He has the magic power to hold this show together, and if he ever leaves for six weeks to star in a motion picture, then I honestly don’t know what would become of us all.

There’s an edit just as the werewolf falls over backwards, which is a shame because that’s one of my favorite werewolf stunts. We see him start to fall, and then he’s just on the ground for the transformation effect.

When Barnabas kneels down to rouse Chris, there’s a bit of yellow marking tape on the carpet.

After Chris leaves, when Barnabas approaches Jeb on the stairs, the camera swings a little too wide, and you can see the edge of the set.

Jeb wakes up on the stairs, and tries to run — but he trips and falls on his face, and then scrambles back up. He also trips on something at the start of the cemetery scene in act 3.

When Sky says to Angelique that they’re “not really alone,” someone coughs in the studio, proving his point.

When Angelique walks from the hallway into the drawing room, you can see a boom mic at the top of the doorway.