“It wasn’t an ordinary dream, it took place at the antique shop.”

You can always tell when a new actor feels comfortable on Dark Shadows, because all of a sudden there’s a lot more noise coming from that direction. Chris Pennock has been on the show for a few weeks now, and he’s getting one of those full-court-press episode streaks that they sometimes do for new villains when they’re just getting started. Overgrown teen tyrant Jeb Hawkes appears in 18 out of 20 episodes in his first four weeks, and in the ones where he doesn’t appear, they spend the whole time talking about him anyway.

And it’s here, in his thirteenth episode, that they’ve managed to convince him to stop worrying about his sense memory and animal work. You’re a villain on Dark Shadows. Just start shouting.

“Here at the unquiet grave of a murderer,” says Jeb, positioning himself in the middle of the Eagle Hill cemetery, “next to the hangman’s work, I beg the dark spirits of the underworld to listen, and release from its depths the avenger I need to deal with Barnabas Collins, enemy of the Leviathans, and most particularly, enemy of mine!” And then he takes a breath, because every once in a while, it’s okay to just go ahead and finish a sentence.

“Hanging is enough punishment for a murderer,” he continues, “but for Barnabas Collins, there must be something more — MORE — MOOOOOOORRRRRE!” And then there’s lightning and thunder, to indicate: even more than that, maybe.

All done with the recital, Jeb opens the wire birdcage he’s carrying, and there’s the familiar marker-on-whiteboard squeaka-squeaka that means adventure is on the way.

And look who it is — our old friend, flappy bat! He’s in the cage now, bouncing up and down with excitement. He’s here to encourage Chris Pennock to forget everything he’s been taught about acting, and just have a good time. That’s right! says flappy bat. More! Ha ha! Yeah. Flap flap flap.

Meanwhile, in the cage next door, periodic vampire and deserver of more Barnabas Collins is opening up and confiding to his friend Julia that sometimes he wonders if pretending to manage a worldwide fanatical death cult, which he plans on destroying from the inside, might not work out as well as he’d hoped.

So, okay. Let’s clear a little room for some backstory. 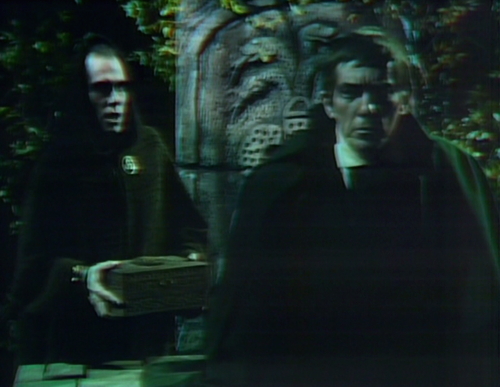 When they started this six-horsepower shaggy dog story back in November, the idea was that the main character of the show would instantaneously switch his personality back to front, aligning himself with a brand-new ancient race of shapeshifting demonic pig weasels who want to marry into his family and take over Collinwood, with no explanation of how that came to be, or why he suddenly started coaching a team we’d never heard of before. It just happened in the middle of an episode, and if the audience didn’t understand what was happening, then too bad, sucks to be you. This approach to story development worked about as well as you’d figure.

Six weeks later, they decided, what the hell, we’re already making a television show, why don’t we at least try to make it make sense, so they added a late-breaking flashback dream sequence that explained that Barnabas didn’t actually want to join the Leviathans in the first place; he’s just going along with it because Snidely Whiplash has tied his dead girlfriend Josette to the train tracks, and she’ll be tortured to death-plus unless Barnabas hops to and agrees to organize their globe-spanning four-headed snake conspiracy.

I mean, yes, there was no evidence of this over the last month and a half, and the new explanation is even more baffling than the previous one, but what are you going to believe, us, or your lying eyes and ears? 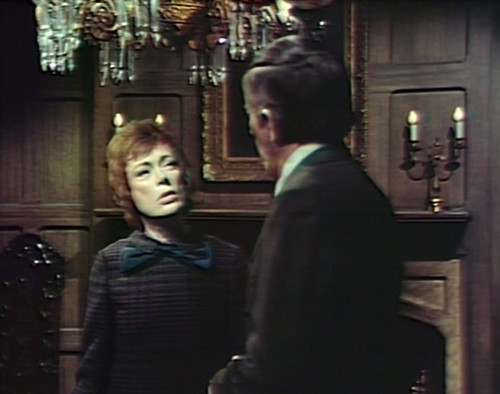 “The Leviathans know how to use our human feelings against us,” Barnabas announces, as Julia stands by and waits for more sensible dialogue to react to. “Walking through the woods just now, I thought about the dreadful choice I had, and I decided there was only one way to turn now, only one way to fight them!”

“What is it?” she asks, and he says, “Julia, we must contact Julia’s — Josette’s spirit, and find out the truth.” And honestly, even with the Fridspeak, it makes just about as much sense as it would anyway. What are you talking about?

It just gets more perplexing from here.

Julia:  Do you think she’ll tell us?

Barnabas:  I don’t know. But we can only try.

Barnabas:  Immediately. Who else is here?

Julia:  There’s no one in the house but Maggie.

Barnabas:  Good. Her psychic strength can help us. Go get her.

Which means what, exactly? Because — hold on, let me get Josette. 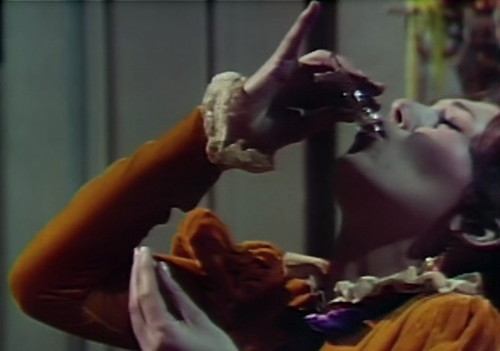 Okay, here we are. The last time we saw Josette, she was guzzling poison in the year 1795, because Barnabas missed an appointment and she wanted to express her feelings about it. Then Barnabas was strongarmed by the Leviathans and transported to the present day, and we never saw her again, because she was dead, and no longer part of the current storyline.

But then the scary hooded retcon man appeared, and spake as follows:

“We stopped her, too! We kept her as hostage, our assurance that you will continue to do exactly what we tell you! You disobey… and Josette will die the most horrible death imaginable!”

So, fine, a hostage being held in the past, where “the past” is a synonym for “a secret place where you can’t find her”. We can work with that. It’s silly, like almost everything they ever do with time travel, but if they’re going to say that Time is a metaphor for Place, then sure, we can whip up a mental model on the fly that helps us process this plot point.

But then how are you going to contact her spirit? Dramatically, isn’t the point that you can’t contact her, that she’s being held somewhen you can’t reach?

But they bust out the spooky seance music, and try anyway. It doesn’t make sense, but I guess Maggie’s got enough psychic strength to cover it, whatever that means.

“Spirit, who once lived here and loved here,” Barnabas says, as we all gather round the candle and touch fingers. “Remember that life and that love, and hear us! From the darkness of the world you now inhabit, and the everlasting depths of the grave, hear us! Join our circle! Join our circle!”

“Barnabas,” Julia says, “if she is a prisoner, they’ll stop her from coming!”

“Unless our words open the door for her,” he breathes, “and make it possible for her to join us, and escape for a while!”

Which I’m sorry, but what? The seances on this show are always weird, but this one is weirder than usual, and that is not easy to accomplish. Yesterday, I talked about how Jonathan Frid is pretty much the only person in the history of the dramatic arts who could put this kind of thing across, and here he is again, our all-time MVP vampire, reaching out across the barrier of time and silence, or whatever he’s trying to say.

Naturally, they make contact, because it’s a television show, and they wouldn’t go to all this trouble for nothing.

Josette, speaking through Maggie, says that she’s never even heard of Leviathans. She died the way that we thought she died, drinking poison and falling to the floor. We are currently watching the show retcon the retcon, a difficult maneuver.

“Josette,” says Barnabas, “are you only saying this to set me free to fight? Because you know the Leviathans, who they are, and what they can do to hurt you?”

“I know of no Leviathans!” she insists.

“You say that,” he cries, “but if that’s what you’re concealing, something from me!”

And again, it works, because everyone is committing to this mad montage of impossible assertions. One logical flaw in a storyline is annoying, and two can wreck the whole story. But what happens when the story is all flaws — overheated people saying overripe dialogue backwards and sideways, undoing their own illogical erasures, louder and funnier, and this time with a candle and a flappy bat?

And we love it, we have no choice but to love it. More! we cheer. More! MORE!

Tomorrow: The Last Days of the Guthrie Brothers.

After the credits, the first scene begins with Jeb saying to the bat, “And as for you, bat of hell…” The way that he says it sounds like the second half of a line that got cut off.

During the seance, Barnabas calls, “Spirit who once lived and loved here, I beg you, break the barrier of the time and silence!”

Barnabas explains that without the Leviathan box, their enemies won’t be able to convert anyone else, “and they will not be able to — to inflict on us anymore these dreadful surprises.”

When Jeb leaves the antique shop, the bell falls off the door, and onto the floor.

When Jeb arrives at Collinwood, Carolyn says that he’s early. They talk and kiss and stand in the foyer, and then the clock strikes, and Jeb says that he didn’t realize how late it is.

Tomorrow: The Last Days of the Guthrie Brothers.