“You know, I rather look forward to going to the future as Barnabas Collins.”

Some say the world will end in fire,
Some say in ice.
From what I’ve tasted of desire
I hold with those who favor fire.
But if it had to perish twice,
I think I know enough of hate
To say that for destruction ice
Is also great
And would suffice.

Ugh, and look at this. The mastermind, sleeping on the job again.

This is the end of the line for the wandering wizard Andreas Petofi, the Count of someplace nobody’s ever specified. Petofi swept onto the scene four months ago and took the hell over, a sinister showman with the stage presence of a hypnotic owl. Now, we need to sweep him back out again.

The problem is that he’s started to repeat himself. This is always a bad sign, in the cutthroat world of serialized narrative. He’s trying once again to steal the adorable immortal carcass of Quentin Collins, so that he can travel into the future and record a new pop song.

Petofi’s meditating at the moment, trying to project himself into Quentin’s airspace, poised to strike as soon as his rival falls asleep. The audience does not want him to succeed. We want him to go away. This is the story of how we make that happen.

You can always tell when a villain is over; it’s when they’ve already done the biggest thing they can think of. The same thing happened a year ago, with Adam and Eve and Nicholas Blair. When the lonely Frankenstein demanded that Barnabas and Julia create a mate for him, it took them forever to set everything up, and they had to run through the mad science experiment four times before the Bride finally woke up. Then she didn’t even do anything; she just walked around and complained.

So after Eve died, when Adam and Nicholas demanded that Barnabas and Julia bring her to life all over again, it was obviously time for them to go. You don’t wear everybody out with your boring plot points, and then start over again. I mean, Once Upon a Time does, but who wants to be Once Upon a Time?

When Pansy interrupts Petofi’s remote control voodoo, he grabs her and he’s like, ha ha, this is just a delay, I’m totally going to start meditating all over again. Somebody needs to inform him that there’s a change in plans.

Pansy snatches Petofi’s glasses and makes for the wide open spaces, but she’s caught by Charles Delaware Tate, who used to be a famous painter and now I guess he’s just a henchman. She struggles and shouts, and says terribly brave things, because Pansy is not interested in playing pretty girl in peril games.

But look at what’s happened to Petofi. He tells Tate to tie Pansy to a chair, and then go to Collinwood and tell Quentin that if he doesn’t come over within an hour, Petofi will kill the girl. And then he lights a cigar, nyah ha ha. It’s sad, really.

I mean, the name Count Petofi used to mean something in this town. Now he’s tying up a girl, with an arbitrary countdown ticking away. He might as well have a big barrel marked TNT. Those whom the gods would destroy, they first give a mustache to twirl. 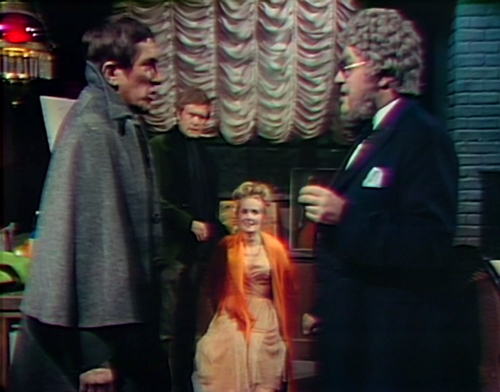 But Quentin is gone. Our sexy antihero has loped off into the darkness, catching a late-night train to New York so he can find his soon-to-be long-lost love.

So here comes eccentric millionaire Barnabas Collins, reclaiming his proper role as protagonist. He’s come to face down the monster and save the girl, unarmed and with no plan at all. He just walks in and says, “Let her go and deal with me,” whatever that turns out to mean.

And take a look at this shot, with Barnabas and Petofi squaring off, and Tate and Pansy in the background. They don’t typically do a lot of four-person scenes in Dark Shadows, because it’s hard to fit all those people onto the cramped sets and still give them something to do. But today is full of these marvelous little compositions, where everybody hits their mark, and the camera’s in the right place, and it looks fantastic.

Meanwhile, Petofi’s had another bright idea. “Quentin is gone,” he shrugs. “I must resign myself to the fact that I won’t see him again, until I get to 1969.”

Barnabas protests that Petofi won’t exist in 1969, but the villain is still puffing on that cigar. “Oh, yes I will, Mr. Collins… in your body.”

“No!” Barnabas gasps, but the mad Count is now deep into the monologue.

“The solution’s been under my nose all the time, and I haven’t seen it until now!” he grins. “But then, you know, my eyesight’s not of the best, Mr. Collins. I fear you’ll find it tiresome at first, but I expect you’ll get used to it.” He chuckles. “You’ll have to.”

He strolls around the room, and Barnabas follows like a puppy, shouting, “Petofi, you can’t do this!”

“Now, there’s another advantage in going to the future in your body, Mr. Collins.” Petofi is still monologuing. “You are here. This time, I don’t have to wait for you to fall asleep, or to lose consciousness.”

Barnabas doesn’t move. “What are you going to do?”

“First,” Petofi announces, “I shall put you to sleep.”

And Barnabas just keeps on standing there, an inch away from the evil wizard, thinking, I wonder where he’s going with this?

So the next thing you know, Barnabas has been laid low, and he’s crashing on the couch for a while. Petofi is meditating, Tate is holding Pansy back, and all seems lost. We’re doing another body swap storyline; I guess we might as well get used to the idea.

And then Garth Blackwood enters the picture.

If you’re not familiar with this particular dark-souled demon, Blackwood is a furious undead prison guard who walks the Earth, brought to life with black magic and art supplies, dedicated to punishing the man who murdered him. He’s already killed his killer, Petofi’s henchman Aristede, and you’d think that would put an end to things, but Blackwood is still out hunting for accomplices.

He bursts through the door, and smashes his heavy chain on the bannister. “TWO prisoners in this cell block!” he cries. “Both of them awaiting JUSTICE! I am here to BRING IT to them!” Dude knows how to make an entrance.

Now, I know that some Dark Shadows fans aren’t crazy about this diablo ex machina, because he basically comes out of nowhere to resolve the storyline. He arrived on the scene last Tuesday, as part of a late-onset origin story for Aristede. He’s not connected to anything we’ve seen before, and he’s about to bring down the big bad crime boss, which technically is more of a protagonist thing to do.

I don’t care. I think he’s great. He’s shouty and weird — a formidable sight, in his black cloak and sinister facial hair. He has an English accent, more or less, and he carries a big scary murder weapon everywhere he goes. We’ve never seen anything quite like this, and that’s exactly what this fading storyline needs — another loose cannon.

Tate takes one look at this terrifying creation, and bolts. “STOP IN THE NAME OF THE LAW!” Blackwood bellows. “COME BACK!” This never works.

Pansy’s trying to keep up. “Are you some kind of a policeman?” she asks. I love Pansy, too. 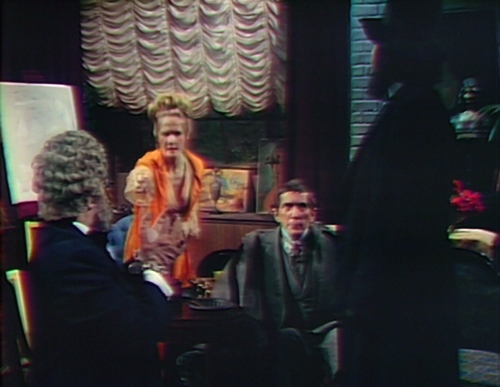 So Blackwood is officially more unpredictable than Petofi is, which means he wins. He declares that Petofi is under arrest, and wakes everybody up.

Barnabas is a bit groggy. “What’s happening?” he mutters, as the prison guard looms.

“The TRIAL of Andreas Petofi!” Blackwood bellows. “How do you testify, FOR! or AGAINST!”

Barnabas says, “Who are you?” which is so cute I can’t deal with it.

Eventually, he manages to get a handle on what’s going on, and gives a little smirk of triumph as he swears that Count Petofi is guilty. 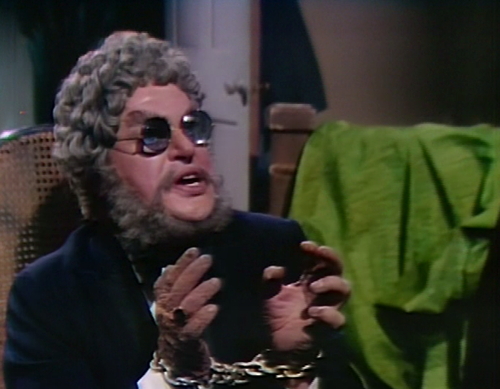 “You aided the PRISONER!” This is still Blackwood, obviously. “Years ago, you aided my murderer! Now, you must DIE!”

So the question is: Is this the appropriate end for Count Petofi? We never heard of Garth Blackwood until last week, and even then he was Aristede’s problem. So it’s odd that yesterday’s combo of Dark Shadows all-stars — Barnabas, Quentin and Angelique — could only delay the mad count, while Blackwood just stomps in and owns the room.

It would be more appropriate if Petofi’s downfall came at the hands of the gypsies — his mortal enemies, the people that have hunted and haunted him since the day he arrived. But — be honest — do we really want the gypsies to come back?

Last week, King Johnny Romano’s widow showed up to dispense some gypsy justice. I didn’t get a chance to write about her, because she was only in two scenes, total. In her second scene, she was choked to death by Blackwood, and utterly forgotten.

It was an odd choice, to say the least. The only person who even knew she existed was Aristede. You have to wonder why they bothered to cast somebody for just two scenes, if she wasn’t going to make the slightest difference.

But what if that was intentional, a way to signal that the end is near for Count Petofi? Essentially, the show is saying that the endless parade of gypsies will never accomplish anything. They have tried, they are trying, and they will try forever to kill Petofi — but if it’s been going on this long, then they’re just as predictable as Petofi’s become.

Imagine the gypsies riding in on a caravan, with a new day player flanked by three non-speaking extras, waving the golden scimitar, and saying all the same things that King Johnny said three months ago. Is that really what we want out of life?

So I say, don’t grieve for the lunatics we might have had; just enjoy the lunatic that’s here. Garth Blackwood is an implacable force of destruction, and isn’t that exactly what we implacably need?

He chases Barnabas and Pansy out of the house, and reaches for his stranglin’ chain — but then he hesitates. Like the artiste that he is, he realizes that this is a special moment. So he grabs for the bottle of turpentine on Tate’s workbench, and gets to work.

He splashes turpentine all over the room — especially the couch, which I guess we’ve decided not to use again — and he sets the room ablaze.

And the two creatures set to battle, as the world burns, and our hopes and dreams and fears tumble to the ground. As always, the cleansing power of flame eradicates the evil in our midst. The world of 1897 — our home, for all these months — burns to the ground. The ravenous fire consumes us all, and we are ashes and loss and pain, at last, at last. Finally, a happy ending.

Just after Petofi tells Tate to lock Pansy up, you can see a camera and one of the camera operator’s legs in shot.

The poem quoted at the top of the post is “Fire and Ice,” by Robert Frost.