It’s morning, and time jockey Barnabas Collins is standing in the ruins of the scene of the crime, sifting through the fragments of storyline left behind after a raging inferno. Combing through the ashes, he finds a few traces of the battle that took place here — a pocket watch, a pair of glasses, a length of heavy chain.

The glasses belong to Count Petofi, and the chain is Garth Blackwood’s — the two titans who clashed and burned here — but the pocket watch is new to me. Did Count Petofi have a pocket watch this whole time, and I never noticed? Well, I suppose he can retrieve it from the lost and found on his way out.

This should be a happy moment for Barnabas — his enemies ground to powder, with practically no effort on his part — but he just looks worn out. Technically, this storyline ended in September, when Quentin didn’t die, and therefore didn’t come back to haunt the 1960s family after all. But here we are at half past November, and what do we have to show for it?

Quentin’s magic portrait has been lost, probably destroyed in the fire, which means his lycanthropy might flare up again. Edward’s fiancee has been stolen out from under his very mustache. Judith has prematurely entombed her faithless husband. Angelique has lost her wager with the Devil, and is probably en route to the fiery pit.

Carl is dead. Jenny is dead. Laura is dead. Sandor is dead. Beth is dead. Even Istvan is dead. Nothing but widows and orphans, as far as the eye can see. This is what happens when you let Barnabas Collins drive.

So let’s begin today’s parade of ruined lives with our first widow, Mrs. Curry. This is a scene from last week, but it’s relevant for our purposes today. Tim’s been checking up on Reverend Trask, and now he’s reporting his findings to Trask’s wife, Judith.

Tim:  There was a widow in Fall River — respectable, a Mrs. Curry. Her husband had been dead for several years. He was a minister.

Judith:  Gregory had been seeing her, when he was supposed to visit me at the sanitarium?

Tim:  He told Mrs. Curry that Minerva had passed on; he neglected to tell her that he married you. Mrs. Curry expected to marry him.

Judith:  Until you arrived.

Tim:  I never saw Mrs. Curry. She’s dead. She killed herself, when she discovered the truth.

So, imagine that — a woman committing suicide, because she finds out that Gregory Trask is off the market. It hardly seems likely, does it?

And it’s hard to imagine what Trask was up to, exactly. Why was he seducing respectable people in Fall River? He’d already married an extremely wealthy woman, and packed her off to a sanitarium. What use does he have for another minister’s wife?

And now there’s another widow, in another New England town. Tim drops this truth bomb on Judith, like it’s totally obvious what Trask was up to with Mrs. Curry. But how many widows do you actually need, in your social circle?

Speaking of which, here’s another troubled widow making poor life choices. Kitty Soames — relic of the late Gerald, Lord Hampshire — arrived at Collinwood two months ago, determined to wangle herself a proposal of marriage from Edward Collins. That wangling has borne fruit, but she’s also come to realize that she’s actually an oil painting from the late 18th century, a condition that’s increasingly common in these troubled times.

Unwilling to burden her betrothed with a lengthy art restoration project, Kitty has decided it would be best to skip town while she’s still three dimensional. This dashes Edward’s dreams of marrying Kitty, and hearing the pitter patter of tiny brushtrokes. Maybe he should develop an interest in marble statuary; they’re cold, but at least they don’t run out on you, not without a hand truck and several accomplices.

Meanwhile, heartthrob widower Quentin Collins has made it to New York City, to explain to his girlfriend that he has to say goodbye. She’s an oil painting, too, by the way; it’s like an epidemic.

“I didn’t meet you at the station,” he says, “because I had to find a portrait — a very important portrait.”

“Why is it so important?” says Amanda, who didn’t realize she was competing in an art exhibition.

“Because it controls what I am,” he says. “Without that portrait, I could become a monster, capable of killing anyone, including the person I love. That’s why I can’t stay with you, until I find the portrait.”

I’m not sure how he’s planning on doing that, considering the last known location of the portrait is his bedroom, which is now closed to visitors. 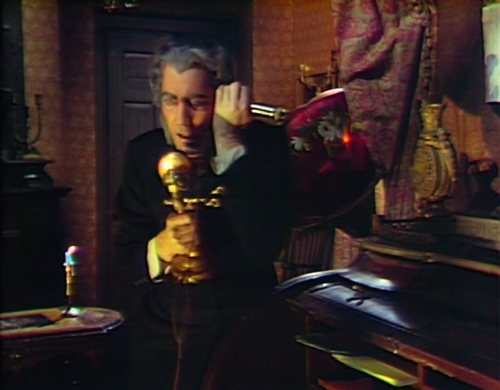 The current and final occupant of Quentin’s suite is Reverend Trask, the hottest ticket in Fall River. Judith has decided to rid herself of this turbulent priest by trapping him in the west wing, and prank-calling him all night. She’s going to let him starve to death in there, unless she can organize something worse, and she’s set up a dedicated phone line so she can call him up and enjoy his suffering. She’s even hidden the portrait of Amanda in the room, just to twist the knife at the proper psychological moment.

So it turns out that Judith Collins is amazing at this. She never seemed to be particularly good at anything, except sucking up to her grandmother, and giving people looks. You’d imagine that among her brothers, she would be the least likely to excel at this kind of thing. Quentin’s the crafty one, Edward has the business and organizational skills, and Carl was the one who loved pranks. But here’s Judith, assembling an uncrackable locked-room mystery, and getting away with it. Where did this come from?

Well, let’s listen in on one of her Jerky Boys routines.

Judith:  Are you enjoying your retreat, Gregory?

Trask:  Judith — you must let me out!

Judith:  How familiar that sounds! I used to say it every day at the sanitarium… but they wouldn’t listen to me. You arranged that. So now I don’t have to listen to you, do I, Gregory?

You caught that, right? “They wouldn’t listen to me.”

I mean, think about it: Judith was in the sanitarium for four months, even though there was absolutely nothing wrong with her. She came home unexpectedly — released with no notice, under cover of darkness — and she was a changed woman. This is a Judith that knows her own mind — a Judith that changes her will, and hires private detectives, and organizes secret carpentry projects without anyone noticing. Who is this new Judith, and what’s responsible for the change?

What really happened at Rushmore Sanitarium?

We may never know the details, but Judith is awfully concerned about the love lives of widows all of a sudden. Has she been talking to that old lady in Providence, and the other one in Boston? If they wouldn’t listen to her… did she start listening to They?

Meanwhile, Kitty has gone over to the Old House to have it out with the decor, once and for all. “I’m going to go away, and I’m not coming back!” she declares. “I’ve got to go away to live my own life, and you can’t come with me! Please — you’ve got to let me be myself! I’ve got to forget Josette DuPres!”

But Josette just sits there on the wall, with her unbelievable poker face, and emits music box melodies.

“It is Kitty Soames you must forget!” the portrait says, because it is evil. 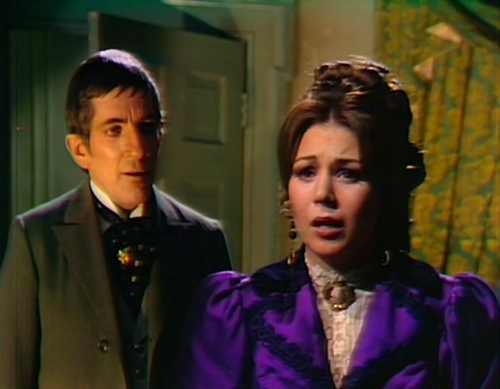 When Barnabas arrives to collect whatever’s left over, Kitty is still trying to hold her shattered storyline together, as the shards of 1897 shimmer, and disappear. She likes it here — in this amazing, unpredictable, irresistible year — and she doesn’t want to get hoovered up into another arbitrary time jump. Kitty wants to stay, with Judith and Magda and Pansy — the exceptional widows and orphans, who stood up to the tempest and managed to survive.

“You know that both of us can’t live,” she begs. “And if I stay here, it’ll be as Josette DuPres, a girl who died one hundred years ago! That’s why you’ve got to let me go!”

“To go among strangers?” Barnabas smiles. “Where no one will love you, nor you, or Kitty — or Josette? No!”

And that clinches the argument, somehow.

So Kitty Soames dons somebody else’s wedding dress, and detaches from this remarkable period in Dark Shadows history. Untethered, she drifts away, leading us even more back into the past. This is her destiny — and ours, somehow.

Tomorrow: Not in Canvas Anymore.

At the start of the teaser, you can see a stage light above the set.

Barnabas tells Tate, “I cannot go until I find out whether Petef-tofi is dead or alive.” He goes on to explain, “As far as I can tell, he and Garth Blackwood were in this fire when it started. But I’ve also evidence that they’ve died in this fire. But I also found these glasses, outside the studio.”

After Tate tells Barnabas that the portrait was in the studio, you can hear the doors of the studio open and close.

When Kitty demands that he let her go, Barnabas babbles, “To go among strangers?

In the final scene, when there’s a closeup on Kitty, you can see a little bit of the Chromakey blue screen behind her.

Tomorrow: Not in Canvas Anymore.