Quentin lights three black candles, and we get the spooky summoning ritual music. “Oh, hidden spirit,” he chants to nobody in particular, “climb out of the pits of Hell, if that is where you be!”

He’s trying to reach Angelique, the sorcerous soap vixen, because sometimes things really are that bad.

“Hidden spirit… Make your presence known to me!”

His face was shredded by a legendary artifact called the Hand of Count Petofi, and just when he hoped to use the Hand again to cure himself, an intruder showed up and snatched it away.

But it’s no use, Angelique doesn’t show up. Last time he tried to call on her, she flew out of the fireplace on demand, but this ritual is a bust. That’s how bad things are for Quentin right now; his most desperate prayers go unanswered.

Magda tells him that they might as well give up, and run away. She rushes to the door, opens it — and finds Angelique, who’s just standing there on the porch. She didn’t hear Quentin’s summoning ritual or anything; she just happened to be coming by anyway. Angelique is a baller.

As we discussed earlier this week, Dark Shadows was clearly heading toward a conclusion for the 1897 time travel storyline, which according to the original plan would have ended right around now, in mid-July. But Dan Curtis and the writers have realized that Quentin and Magda and Gregory Trask are too interesting to get bundled offstage after only four months, so they made a sudden swerve towards an unknown destination.

Now the writers need to conjure up another few months of story, and they’ve recently annihilated almost the entire supporting cast. So it’s only natural that they call upon the spirit of Angelique, because that’s how every new Dark Shadows storyline begins.

Angelique is a high-powered chaos engine, who generates story just by walking into the room. She’s immensely powerful and equally self-centered, and she always has some kind of crackpot plan up her sleeve, so if she shows up unexpectedly, you have to ask: Why is she here, and what does she want now?

Well, first she wants an update. She’s already heard about the Hand from Evan, and she wants to know where it is, and why everybody’s so excited about it. Magda says that she stole the Hand from King Johnny Romano to end the curse, and Angelique’s face just lights right up.

“The curse!” she chirps. “Well, you two have been busy.” That’s the nice thing about Angelique; you can tell her anything. She’s done crazier shit than you could even imagine, and then traveled back in time to do it all over again, just for kicks. Nothing shocks her.

Quentin says that he’ll tell her everything, if she promises to help him. “Well, first I’ll listen,” she says, “and then perhaps I’ll promise.” She says that kind of thing all the time.

In fact, after he slips her the episode guide, she proposes yet another vague bargain, because everything is a negotiation with this broad. “You’re asking a lot of me, Quentin, and I may ask a lot of you in return. Are you prepared to accept that?” Then, when she sees him hesitate, she says, “All right, you don’t have to answer me. I’ll recover the Hand, as a sign of my goodwill. And then I’ll name my price, and you can make your decision. Agreed?” He finally says yes, because at a certain point you have to end the scene somehow.

Then it’s off to the docks to hustle Aristede, the mysterious stranger who took the Hand away from Quentin at knifepoint. When we saw Aristede earlier in the evening, he had an uncanny knowledge of Quentin’s current storyline, but somehow Angelique fell through the cracks in his curriculum.

So Aristede makes a fatal n00b mistake, namely: not being suspicious of the astonishingly beautiful woman hanging around alone on the docks in the middle of the night. He takes her at face value, and in his line of work, that’s never a good idea.

Angelique smiles and flutters and makes little teasing jokes about who she is and what she’s doing here, showing him those big blue eyes that have caused so much suffering.

The scene that follows is a film noir sequence crossed with Suspiria by way of Willy Wonka & the Chocolate Factory, and it’s so beautiful that I’m just going to stick it in here verbatim.  Like the experienced predator that she is, Angelique instantly detects Aristede’s weakness — his vanity — and she lures him into her snare.

Aristede:  Why aren’t you with the others?

Angelique:  Well, the truth is, I had a quarrel with my, uh —

Angelique:  Yes. My gentleman friend. I felt so terrible that I came down here to be alone. But it’s much worse being alone.

He tries to pull her in for a kiss, but she pushes him away playfully.

Angelique:  You know, I could entertain you, while you’re waiting.

Aristede:  I’m sure you can.

Angelique:  Shall I show you?

Angelique:  Would you give me your handkerchief?

He does. She takes the cloth, and smells it appreciatively.

Angelique:  Ah… You use a very expensive scent.

Aristede:  (grins) Well, I like what’s pleasing to the senses.

Angelique:  So do I.

She reaches into a pocket inside her cape, and takes out a wooden toy soldier.

Angelique:  Now… This is you. Do you recognize yourself? (She wraps the handkerchief around the soldier.) Not so dapper as you, of course, but definitely you. Now, turn around, and he’ll call to you in your own voice. What’s your name?

Angelique:  Aristede! I like that. Turn around, Aristede. Let me see if I can fool you.

While his back is turned, she ties the handkerchief in a knot around the toy soldier’s neck.

Angelique:  No. But I did fool you. 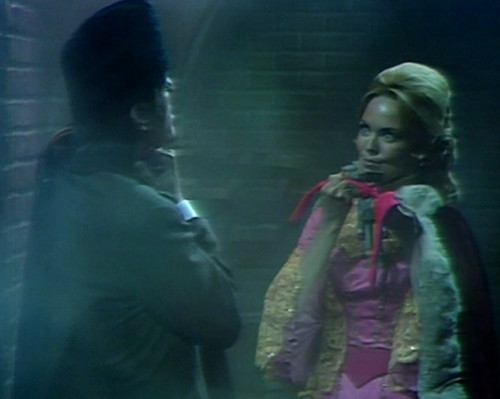 She pulls tight on the handkerchief, and Aristede gasps for breath.

Aristede:  Ack! What’s happening? What are you doing to me?

Angelique:  Can’t you tell what I’m doing? I’m choking you.

Angelique:  On one condition, that I get the Hand.

Angelique:  Yes, Aristide. The Hand! Give it to me quickly! You have very little time left.

That’s the kind of top-shelf crazy that Angelique brings to the table. Aristede wants to be the mysterious stranger, but there is nobody in this world stranger than her.

Tomorrow: Victor and the Wolf.

Edward loses track of his lines while talking to Angelique:

Edward:  I believe that you’ve known all along what Barnabas is.

Edward:  Well… (He pauses, and checks the teleprompter.) And I believe you know where he is now.

According to the credits, Victor’s name is Victor Fenn-Gibbon, but he introduces himself as “Fenn-Gibbons”, and Edward repeats it.

Edward has another bad moment with Victor:

Edward:  Well, you’re welcome to stay here at Collinwood for the duration of your visit.

Victor:  You are most gracious, Mr. Collins, but I should hate to impose.

Edward:  Oh, not at all. The Earl of Hampshire is a good, dear friend of mine. I would not offend him by not having you stay anywhere but at Collinwood.

Tomorrow: Victor and the Wolf.