“You live in another body now, but your own body waits for you!”

Incipient teen idol Quentin Collins died earlier this week after he was stabbed by his insane ex-wife, which for the Collins family is practically natural causes. But like almost everyone who dies on Dark Shadows, he’s returned for another lap around the track.

Zombie Quentin is being remote-controlled by Barnabas’ insane ex-wife, who’s using him to play pranks on the family. At the moment, he’s scooped up the governess and is carrying her out to the graveyard.

Now, he’s not trying to eat her brain or anything; he’s not that kind of zombie. The flesh-eating cannibal zombie was invented by George Romero in Night of the Living Dead, which was released six months before this episode was made. And they’re not called zombies in that movie anyway; the Night of the Living Dead characters just call them ghouls. It wasn’t until the 1978 sequel Dawn of the Dead that Romero started describing the creatures as zombies, changing the pop culture definition of that word.

So compared to the slavering fiends of The Walking Dead, Zombie Quentin is actually very polite, and exceptionally well-groomed. He doesn’t bite anybody, and his hair and his outfit are in flawless condition, even after busting his way out of a grave covered in cement.

In fact, the only way you can really tell that there’s anything the matter with him is that he doesn’t speak, and he’s always bulging out his eyes and staring straight ahead. The nice thing about Zombie Quentin is that you always know he’s paying attention.

Like Zombie Jeremiah in late 1967, this is the original Haitian voodoo version of the zombie — returned to life by an evil magician, drained of willpower and personality, and forced to do terrible things.

In this case, Angelique wants Zombie Quentin to strangle the governess until she passes out, and then carry her to the cemetery and lay her in a grave, in some kind of grim protest against homeschooling.

But the interesting thing is that this image — a mindless hulk carrying an unconscious woman — doesn’t fit either version of the zombie story. This is a whole other monster.

In fact, in White Zombie, the zombie is the girl. White Zombie was the first zombie movie, made in 1932, and they hadn’t quite got the hang of it yet.

In White Zombie, Bela plays Murder Legendre, a Haitian voodoo master with unearthly powers and a Hungarian accent. He has half a dozen zombie slaves, all guys that pissed him off one way or another, turned into mindless goons. Now he gets all the pleasure of bossing them around, with no danger of backchat or sass.

The good guys in the movie are a young couple named Neil and Madeleine who have come to Haiti to get married, for some reason that I don’t believe anybody ever mentions. Charles, a plantation owner who they meet on the boat, has decided that he’s in love with Madeleine, and he contracts with Bela to drug her and turn her into a zombie.

They do it during the wedding, too, which is super douchey. Charles puts the magic potion on the flowers that she’s holding as she walks down the aisle, and she collapses mid-procession and dies. They bury her, and then Charles and Bela dig her up, and Bela hypnotizes her. Now she’s an empty shell, eternally staring off into nothing, and she lives in Charles’ house and looks decorative. 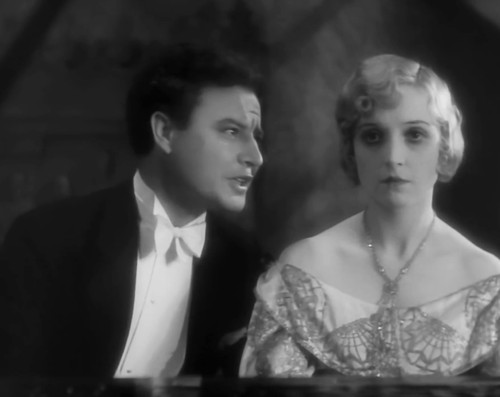 The best scene in the movie is Madeleine all zombied out, sitting at a piano, staring off into space, and playing Liebestraum while Charles talks at her about how guilty he feels for doing this to her. She doesn’t care.

There is a supernatural element to all of this, but it’s a bit conceptual. Bela controls the zombies through telepathy, which he activates by putting his hands into the “zombie grip”. It’s not clear why this particular hand gesture gives you the power to control dazed fiancees, but they make a big deal about it, so I guess it’s important.

In the end, Charles, Bela and all the zombie slaves fall off a cliff conveniently positioned nearby expressly for that purpose, except for Madeleine, who breaks free of Bela’s control because Love Conquers All. She just kind of shakes it off and then she’s fine. It turns out that she was really just in a trance and wasn’t dead at all, which means she hardly even qualifies as a zombie in either sense of the word, so thanks for nothing.

So if Zombie Quentin isn’t doing a Night of the Living Dead zombie and he isn’t doing a White Zombie zombie, then what is he doing picking up girls and carrying them off to the graveyard?

The way that he’s carrying Rachel looks super familiar, because there’s a long, unhappy tradition of dudes carrying unconscious women for our entertainment. This trope is not one of the most highly-evolved images in the history of film, for obvious lady reasons. The female in this image essentially has no will of her own, and she’s being tossed around like hand luggage.

Now, you could make the case that this isn’t as misogynist as it looks, because the guy carrying the girl around is a monster, or a robot, or an alien or whatever. He’s a villain, and he’s doing a villainous thing. It’s not like this is the Olympic girl-carrying championship, and he’s going to get a gold medal for this.

But the troubling aspect of the “pretty girl in peril” trope is that the audience is supposed to be enjoying the suffering of beautiful young women. The movie studios don’t put this image on posters because they want people to get angry and become feminists; they use this image because they know guys enjoy looking at images of helpless women in danger. 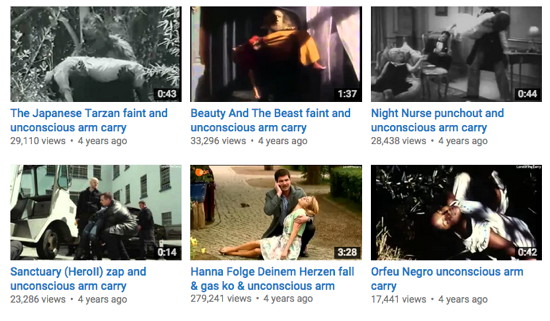 The thing that makes this especially unsettling for me is that there are several people on YouTube who upload edited compilations of women losing consciousness and being carried around.

Seriously, you can search on YouTube for punchout unconscious arm carry and get a whole bunch of clips. The worst are the head ko unconscious arm carry videos, which are so upsetting that I can’t talk about it any more. It’s obvious that these are guys who enjoy watching young women getting punched in the face. 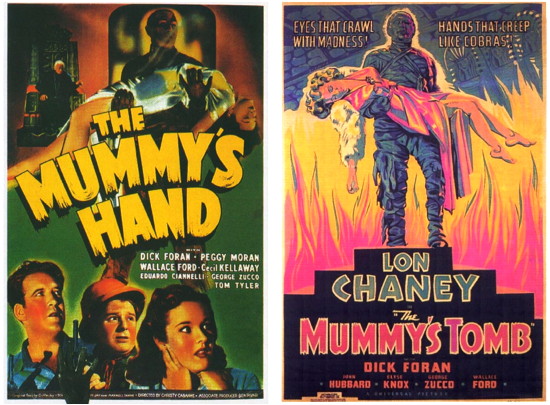 But — those guys did provide a helpful service for me, which was to confirm that the early pioneers in the field of non-consensual girl transport were the Universal Monsters Mummy films, particularly The Mummy’s Hand in 1940 and The Mummy’s Tomb in 1942, both of which feature the Mummy carrying a woman as the central feature in the movie posters.

The compilation above — which does not feature any images of women with head trauma, you’re welcome — is from The Mummy’s Tomb, with Lon Chaney Jr doing the honors. The video edits together only the shots with the Mummy carrying Isobel around, removing all the shots of the townspeople chasing after him with torches, so for a minute it just looks like he’s taking her out for a stroll. 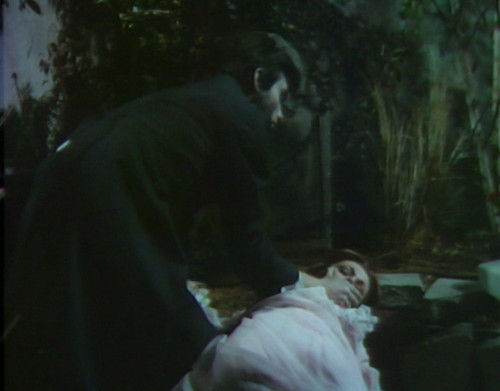 Dark Shadows never got around to doing mummies on the show. It was one of the Universal Monsters characters that they just couldn’t figure out, along with the Invisble Man and the Creature from the Black Lagoon.

But Zombie Quentin is kind of a shout-out to the Mummy iconography, a link in the chain of our collective superstitions and fears — stretching backwards from 1969 through 1940, to 1897 and then all the way back to 2600 BC. The Collins family tomb may not be as big and as fancy as an Egyptian monarch with his own soundstage, but our girls are just as pretty and just as unconscious as anybody’s, so that ought to count for something.

At the beginning of act 1, there’s an unbelievable amount of mist inside the Old House, blowing in from the cemetery set. It’s really noticeable in the first shot of Sandor coming downstairs; it looks like the fog is rolling in. There’s also a developing weather pattern in the Old House basement later on.

When Barnabas interrupts Magda and Sandor’s conversation in the drawing room, you can see the boom mic over his head.

They cut to the wrong camera when Barnabas asks Sandor if he’s ever heard the word zombie; it’s zooming in to Sandor to set up the next shot.

When Quentin brings Rachel to the open coffin, the camera goes too high, and you can see a studio light. This happens pretty often with Quentin, because he’s so tall.

When Barnabas is talking to Sandor in the basement in act 1, you can see Magda’s shadow moving on the wall by the stairs, waiting for her entrance. The same thing happens with Sandor in act 3.

When Magda waits outside the Old House for Barnabas, you can see the edges of the flat that’s supposed to represent the dawn’s light.

Rachel runs into the house and grabs onto the bannister, which wobbles alarmingly.

When Zombie Quentin smacks Sandor, the gypsy falls in front of a tombstone that says “Laura Murdoch Radcliffe, born 1840”. This is an old prop left over from the Phoenix storyline in early 1967, before Barnabas was released from the mystery box. In 1967, it was revealed that Roger’s wife Laura was actually an undead phoenix, who dies and is reborn every hundred years. So finding the grave of Laura Radcliffe, who died in a fire in 1867, was a clue that indicated that Laura Collins was going to die in 1967, taking her son David with her.

Having Laura’s gravestone appear in 1897 is a nice callback to the earlier story, except that pretty soon they’re going to bring Laura back and update the “every hundred years” dates to the 1790s and 1890s. Oh, well. 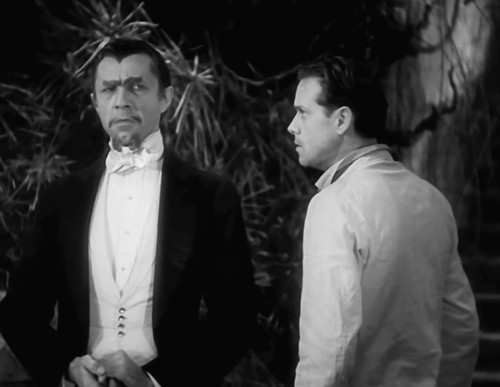