“Where is this uncle he thinks he is?”

Okay, let’s see if we can summarize.

Eccentric millionaire Barnabas Collins has traveled back in time to 1897, in order to stop Quentin from dying alone, sealed up in his bedroom, and then sitting around and stewing about it. If Quentin dies under those circumstances, then he’ll return as a ghost in 1969, to haunt the family and kill David.

We’re currently a month into this loosely-defined rescue mission, and Quentin has already been stabbed to death. Barnabas decides that this is a mission-critical failure for some reason, and he asks Angelique to use her magic and bring Quentin back to life. As an act of spite, Angelique brings Quentin back as a mindless zombie who attacks the governess and tries to bury her in his own grave. To make matters worse, Quentin’s spirit possesses the body of his nephew Jamison.

Once the governess is rescued, Zombie Quentin leaves the cemetery and goes to the Old House, bashing the door in and fighting his way past several gypsies to make it to the basement, where he sits down quietly in a chair and just kind of chills out. Barnabas and the gypsies try a seance to reunite his body and his spirit, but it doesn’t work, and the zombie leaves the basement, with Barnabas in pursuit. We finished yesterday with a shot of Zombie Quentin on his belly, dragging himself desperately toward his open grave.

Nope, it looks like we can’t summarize this after all. That’s a negative. 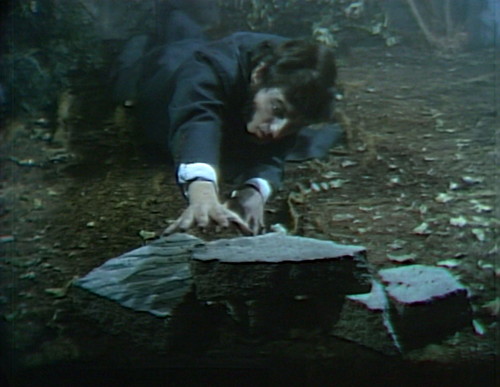 Because I have to say, I’ve been writing this blog for two years now, through the good times and the bad, and this might be the first time when I honestly don’t know what they’re getting at.

We’ve already discussed the bigger picture questions, like why is Barnabas convinced that Quentin has to die sealed up in his room, and what does Angelique get out of all this. But now I can’t even figure out what’s going on from one scene to the next. Zombie Quentin pushed Barnabas out of the way, stomped out of the Old House and through the woods, and then suddenly dropped to the ground several feet away from the place that he wants to go, which is exactly where he was in the first place.

I mean, it’s a fantastic image — handsome rascal of the living dead, slithering back to his tomb. It looks great, and I’m usually the last person to complain about story consistency when there’s a surprising spectacle to look at. But I don’t understand what anyone is doing right now, and that’s bothering me for some reason. Maybe I’m watching it wrong.

So I’m going to keep going, and see if I can get a better grip on the situation. The zombie gets about an inch away from the grave and then runs out of gas — it’s like there’s a force shield around his grave, and the closer that he gets to it, the more energy it takes, until he just collapses, exhausted.

Then Barnabas leads the possessed Jamison to the graveside, hoping that Quentin’s spirit will leave the boy and go back to his rightful body. As he approaches, Jamison yells at the body: “Get up! Get UP! You get up now!”

I believe that this moment is entirely unique in the history of zombie fiction — a zombie gets tired and passes out, and then people come along and try to wake it up. Dark Shadows is innovating all over the place these days.

And then we get another moment that I don’t understand.

Jamison:  Don’t let her do this to you!

Jamison:  What did you call me?

Jamison:  Jamison is a child, Barnabas. You know that.

Barnabas takes a moment to collect himself. It’s not easy to process this level of nonsense. 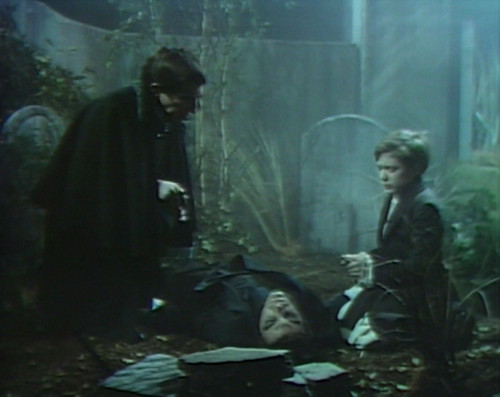 So Barnabas just bends down, and says, “Take his hand, Quentin.” And then he does this weird little impromptu open-mic poetry reading, trying to get the toothpaste back into the tube.

“Spirit,” he says, “depart from the body in which you have found refuge! Go into your own body! Let the force of life start your heart beating again! Let the warmth return to the hand! Movement come to the lips! The voice come from your mouth! Let your own eyes see again!”

Now, the interesting thing is that this is not how Barnabas talks. He’s not a magician, or a medium. Angelique is the one who casts spells; Stokes is the one who leads seances. Barnabas is usually the guy on the other end of this scenario, the monster that people are trying to ward off. But here he is, staring into space and spouting necrobabble like this is something he does all the time. Sometimes I think Barnabas will do anything for attention. 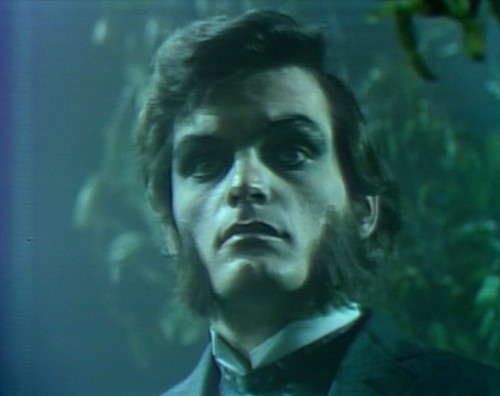 It doesn’t work, of course, because the rule of Dark Shadows is that Barnabas is bad at everything.

The zombie stands up, all sticky and covered in leaves, and it’s still a zombie. Jamison bursts out laughing for some reason, and when Barnabas calls his name, he narrows his eyes, and says, “I told you not to call me Jamison anymore.”

And Quentin just stands there, contemplating an empty future. Apparently, his spirit wants to stay in Jamison’s body, whether that makes sense or not. (It doesn’t.) And now he doesn’t want to go back to his grave anymore, because this is the Standing Zombie Quentin action figure, and only the Crawling Zombie Quentin figure wants to be in the grave.

He is lost, and we are lost, and there is no exit from this storyline cul de sac. I like the occasional bit of avant-garde experimental theater in my soap opera spook show, but we’ve been at this for a week now, and it looks like these three are just going to walk back and forth between the Old House and Quentin’s grave for the rest of their supernatural lives, utterly gridlocked.

And then, just when all seems lost, there’s a knock at the door, and guess who’s there! It’s Trask, a whole new Trask that we didn’t even know there was one, and here he is.

This one is called Reverend Gregory Trask, who runs a school called Worthington Hall. Edward has been speaking to him about sending the children there, what with all the recent unpleasantness.

“We are honored that your brother is considering sending us children of your estimable family,” he smirks. “We only hope our school is worthy.” 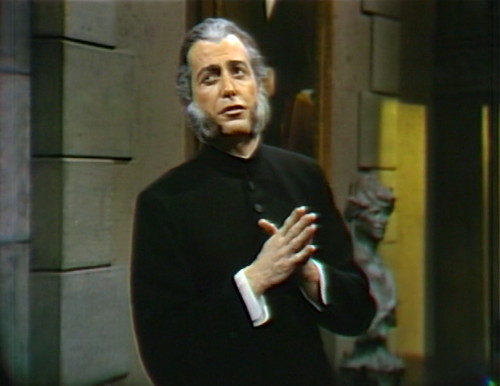 Judith apologizes for being a little distracted and jumpy, explaining that she isn’t feeling well tonight. “It’s nothing, just nerves,” she says.

“Peace!” the Reverend smiles. “That is what we are all after. Peace within ourselves. It’s so enormously difficult to find.” And then he goes into the sales pitch. “One must begin with the child. Let the seed of contentment grow. Show the child how to protect himself from the forces of anarchy, which exist in all of us.”

It’s the return of Jerry Lacy, hurrah, and the show is back on track in an instant. Jerry started out on the show as hard-boiled lawyer Tony Peterson in late 1967, and when the show moved the action to 1795, he played Reverend Trask, the crusading witchsmeller who worked tirelessly to fill our afternoons with noise and confusion.

He left the show last September, in a quiet exit unworthy of the man. Carolyn walked Tony to his car, and we never saw or heard from him again, like Bobby Martin going up to the attic to wax his skis. It seemed like he was gone forever.

But Jerry has recently picked up a sweet new gig, playing the spirit of Humphrey Bogart on Broadway in Woody Allen’s Play It Again, Sam. The play opened in mid-February, and one night, Dark Shadows producer Dan Curtis went to see the show.

Like any television producer and/or four-year-old, Dan would take something for granted until he suddenly couldn’t have it anymore, and then he wanted it more than anything. Sharing a bite at Sardi’s after the play, Dan told Jerry, “You’re going back on the show!” and here we are, a month later. 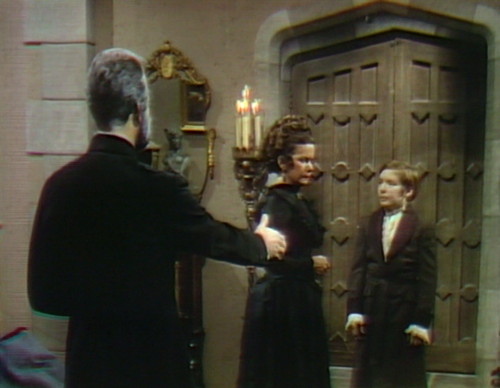 This is one of the great gifts of Dark Shadows, especially in this period: they can pivot. Since we landed in 1897, they’ve been sprinting through plot points like crazy, running through as many ideas as they can.

They take each of these ideas as far as they can take it in a week — and on Friday, something big has to change, wrapping up that thread and unraveling the next one. If you look back over the last five weeks, it’s an incredibly tight structure; nothing lasts for more than five days.

So now that Zombie Quentin has outlived his usefulness, we need something new to pay attention to — and here’s Jerry Lacy, pulling off his Bogart trenchcoat and pasting on the sideburns for another round of noisy speeches and crazy rants.

And Jerry isn’t the only old cast member that Dan grabs off the street and drags back to ABC Studio 16. There’s another one coming up, just in time for another Friday pivot.

So the week ends with another noisy exorcism, with Trask stepping in to take his rightful place. He actually shuts the drawing room doors in Barnabas’ face at one point.

This poor lost lamb beseeches your help! A small, frail body possessed by a giant, evil force, leaving the cold, dead body of what once was a man!

The Devil has been in these rooms, and he has inhabited the bodies of these two, and looked with favor upon them! The Devil must be vanquished, and driven from them, before he can be driven from this house!

Barnabas must have been crazy to think he could compete in this arena. Sometimes you just need to step back, and let the professional do his job.

At the start of the teaser, Barnabas enters Collinwood, closing the doors behind him. As he approaches Judith, the doors swing open behind him.

Barnabas tells Judith, “I must have Jamison… or else, prepare to know that everyone in Collinsport will know what’s happened here.”

As Jamison approaches the exhausted zombie and says, “Get up! Don’t let her do this to you,” part of a camera enters the frame on the left side.

There’s an offstage squeak as Trask tells Judith his name.

When Barnabas and Judith leave the drawing room at Trask’s request, you can see the boom mic at the top left of the screen.