“I would’ve thought it idiocy to assume that a praying bigot could turn a zombie into a man.”

Rounding the turn at the 1897 Dark Shadows Character Invitational, we find track favorite Quentin Collins showing signs of weariness. He got off to an astonishing start in the early weeks of the race, even against seasoned thoroughbreds like Barnabas Is a Vampire Again, and Julia Wearing a Wig.

But Quentin called in dead last week, spending Monday and Tuesday flat on his back, and the rest of the week stomping around as a mindless zombie. That’s been interesting and fun, and his bulging, sightless eyes have made for some chilling-slash-amusing moments. But you can’t rely on a gimmick like that for long, and by the end of the week, he’d taken it about as far as it could go. Quentin needs to get back up to speed if he’s going to qualify for the championship.

Stamina is everything on this course, because it’s a race that never actually ends. The horses just keep running around and around the track without stopping, only taking breaks for Thanksgiving, Christmas and the occasional assassination. 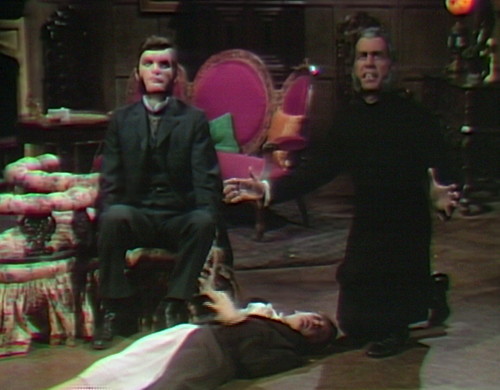 So Quentin needs to find an exit hatch in this zombie story, and I mean now, because there’s a surprise competitor who just walked in and took over. It’s Reverend Gregory Trask, the lookalike great-great-grandson of that lunatic witch hunter who sent Vicki Winters to the gallows in 1795. This Trask runs a Dickensian boarding school for unfortunate children, and he’s hoping to sign up Jamison and Nora as new students.

Arriving at Collinwood smack in the middle of one of the family’s regular supernatural crises, Trask steps up and takes control of the situation. Somebody needs to get Quentin’s spirit out of Jamison, and back into Quentin where it belongs.

And guess what, he’s amazing at it. If Dark Shadows is a five-year televised hollering contest, and obviously that is exactly what it is, then Reverend Trask is the odds-on favorite. He is louder than you, and crazier than you, and he knows more words than you do.

“You must help me now!” he says, to nobody in particular. “Your will must not ignore this desperate child!” You have to love a guy who addresses the Almighty, and uses the word “must” twice in a row.

“LET THE DEVILS WITHIN HIM RETURN TO THE BODY THEY BELONG!” he yells. That command doesn’t really make sense, gramatically or theologically, but the only things that really count in this game are conviction and volume. “GIVE THIS POOR FALLEN LAMB THE STRENGTH TO PURGE HIMSELF! GIVE HIM THE STRENGTH!”

And then they cut to Quentin for a reaction. 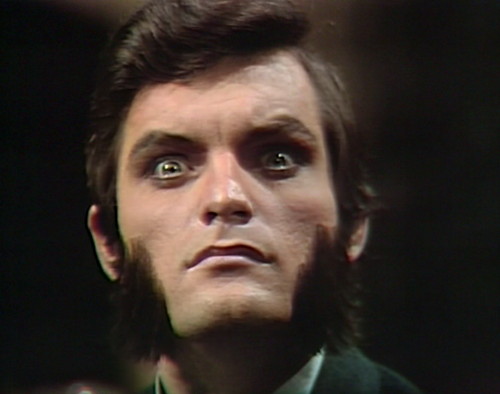 I know, right? I can hardly believe it myself.

And Quentin has good reason to be alarmed. We are currently five minutes into this new week, and already Trask is way ahead of the pack.

Out in the foyer, Barnabas is doing his part for civil unrest by developing an instant and abiding hate-on for the Reverend, based entirely on Trask’s resemblance to his great-great-grandfather, which is manifestly unfair, because Barnabas killed Trask and not the other way around. But Barnabas Collins will not listen to reason.

“The so-called Reverend Trask,” he grumbles. “I find it difficult to believe that any church would claim him.” Judith points out that Barnabas has a smart mouth for a guy who only arrived here a short time ago. He retorts, “If I’d only been here a matter of a few hours, I would’ve thought it idiocy to assume that a praying bigot could turn a zombie into a man.”

And they just stand around in the foyer like that, squabbling away. At one point, Judith says, “You have no right to speak to me in that manner!” and Barnabas says, “Someone must!” Everybody in this episode is about two seconds away from socking everybody else in the mouth.

Trask finally opens the drawing room doors, and Barnabas growls, “Well, Trask? Have you FAILED?” And things just get grouchier from there. Pretty much every line from here on is an attack on somebody; I’ll hit the highlights.

Amazingly, Trask’s exorcism actually worked; Jamison is himself, and Quentin is alive again. The last thing he remembers is being stabbed, so he jumps right in.

Quentin:  Did you find her, Judith? Lock her up?

Trask:  (putting a comforting hand on Quentin’s shoulder) Mr. Collins, I would not suggest too much activity.

Quentin:  Who are you? Judith, some new flunky? (Trask glowers.)

Quentin:  Reverend? Well. (He smirks.) Have you told him I never pay my debts? I thought you were a doctor. Hasn’t anyone had the sense to send for a doctor? I’ve been stabbed!

Barnabas:  I think you’ll find that time has healed your wounds considerably.

Quentin:  Time? It just happened, in the cottage. Didn’t you find me there?

Trask:  Mrs. Collins, I was not aware that there had been an attempted MURDER here!

Trask:  I don’t think this should be discussed in front of the boy!

Jamison:  Who tried to stab you, Quentin? WHO?

Oh, it’s amazing. Five people, flawed and angry, interrogating each other at top volume. This is why we have soap operas, so that every once in a while you can organize a crowd scene like this.

And, amazingly, Trask still dominates. He tells Barnabas and Quentin that if they want to discuss the murder, they’ll have to do it in another room. Then he tells Jamison to think about all the wonderful things that Judith has done for him, and makes him wait out in the foyer. And it works; everybody just does what Trask says.

Judith thanks him for what he’s done, and he says, “It was not my power, Mrs. Collins. I am grateful that in His providence, He used me.” It’s terrific. Trask is running the table. 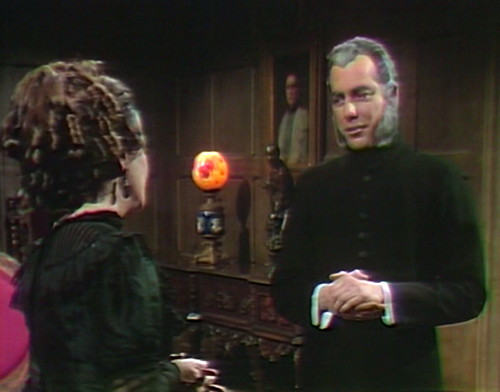 You would think, in an episode where Quentin literally comes back from the dead and instantly starts telling secrets about his own murder, that he would be the marquee character for the day. Quentin’s been the most interesting person on the show for five weeks straight, and this is clearly a moment when everybody should be clustering around and paying attention to him.

But the most important person in the room is Trask. He shoos Quentin and Barnabas out of the room — the two of them clearly about to discuss supernatural marital problems — and instead of following them, we stay with Trask. Then he pushes Jamison out into the foyer, and again we stay with Trask.

This is how a television show signals who the audience should be paying attention to. They point a camera at him, and leave it running.

We have to wait until after the commercial break, but we eventually get to Barnabas and Quentin’s conference in the study. They both agree that Trask couldn’t really be responsible for Quentin’s miraculous discovery, but Barnabas is cagey about his suspicions. Then things take a turn towards the personal.

Barnabas:  Tell me about your wife.

Barnabas:  Did you know she was still here?

Quentin:  A girl… beautiful, quite talented in her own way… a girl of unknown origin, as Edward so succinctly put it.

Barnabas:  Did you drive her mad?

So this is how far they have to go, just to get you to forget about Trask for a minute. Backstory secrets and pushy questions, getting everybody’s temper up again.

Quentin’s not having it.

Quentin:  Why this constant curiosity about my life? If I wanted you to know everything about me, I would make you a friend.

Barnabas:  When actually, you’ve been interested in making me an enemy.

This is what Barnabas and Quentin do these days, just stand around and analyze their relationship. The writers seem to think that we have an infinite appetite for this sort of thing, and they are one hundred percent correct. 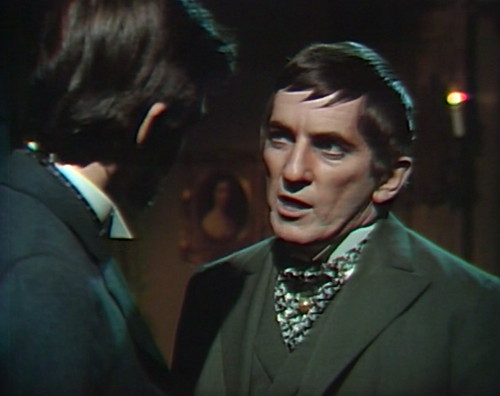 And they keep setting up shots like this, with Barnabas and Quentin looking into each other’s eyes. Everyone knows that if two people stare at each other for more than a few seconds, they’re either going to make love or kill each other, and on a vampire show, it’s probably both.

Barnabas:  I’m willing to help you.

Barnabas:  Because you and I can be useful to each other.

Quentin:  Wrong! Whenever I think of you, I only think of one thing: What does he want from me?

The answer to that question doesn’t really matter, of course. The important thing is how often Quentin thinks of Barnabas. 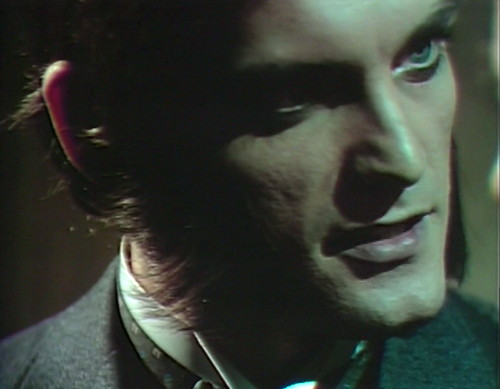 So this is what’s happening on Dark Shadows these days, just twenty-two minutes of simmering aggression, five times a week. This is Dark Shadows, red in tooth and claw. Just the way I like it.

Barnabas was wearing his overcoat at the end of Friday’s episode. In today’s reprise, he’s not wearing it.

When Jamison falls to the floor during the exorcism, he falls next to an X of yellow tape indicating the blocking.

Immediately after Jamison falls, Trask kneels down next to him, and then you can see somebody’s shadow moving on the right side of the screen.

After Quentin says, “Are you sure you’re still in charge of this house, Judith?” and walks to the door, a boom mic zips overhead at the top left of the screen.

At the beginning of Trask and Jamison’s chat in Jamison’s room, you can hear footsteps of people walking around in the studio.

In Friday’s episode, there was a shot of the clock in the foyer, showing 9:00pm as Trask began his exorcism of Quentin and Jamison. The action continues in today’s episode — the exorcism, the aftermath, several conversations upstairs and downstairs. Then in the middle of act 3, Trask announces that he’ll be back in an hour for the family’s decision. He notes that the time on the clock in the foyer is exactly 9:00.

In act 3, when the camera focuses on the clock face striking ten, you can see the top of Barnabas’ head as he rushes by the clock to get into his place for the next shot.

Barnabas tells Trask, “An authority of our family brought in — someone who knew about witches.” Then he takes a look at the teleprompter before he can go on. The line should have been “brought in an authority on witches.”

There’s a crackling sound over the end credits. 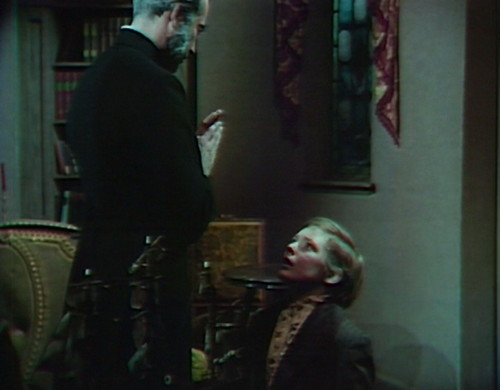