“I hope I disappoint you, and die before dawn.”

Barnabas Collins looks around, and tries to focus.

“Where have you brought me?” he moans. “What is this place?”

His wife, Angelique, drifts to his side.

“You’re near the sea,” she says. “Far away from anyone who may want to find you.”

Unimpressed, he surveys the room, clearly thinking: Near the sea? Dude, we live in Maine. Everything here is near the sea.

Angelique is coming up on her Dark Shadows anniversary — she joined the show in late November, 1967 — and it’s been a pretty action-packed year. She’s been married twice, and murdered twice. She’s been loved, rejected, exorcised, resurrected, aged, burned, strangled, worshipped, and shot in the shoulder.

She’s even been turned into a vampire, and now — well, why don’t I let her take it from here.

Angelique:  Regardless of what I am — what I have been — I’m still a woman, Barnabas. I think and feel like a woman. I’ve hated things you’ve done, but I’ve never hated you, yourself.

This “I’m still a woman” thing is a weird, vaguely misogynist trope that turns up in — oh, she’s still going.

Angelique:  How could I? The memory of a certain night in Martinique has never left my mind.

Angelique:  You came to me that night, and I was full of love for you. How else could I have given you so much of myself? But I knew then — that no power on earth could prevent us from one day keeping the pledge we made that night.

Angelique:  Not every pledge is made with words, Barnabas.

So it’s a pretty good scene, kind of gloomy and intense, invoking the secret origins of this weird new mythology in order to bring this chapter to a close. I don’t think a hell of a lot of the blocking, but you can’t have everything. 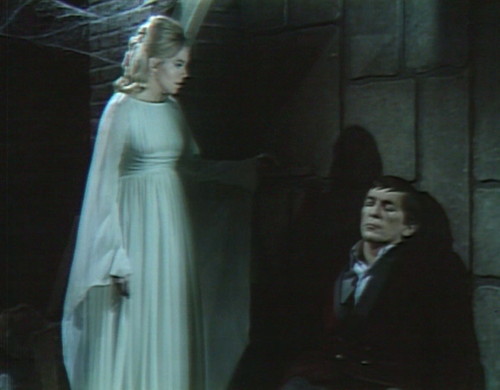 So the plan is for her to turn Barnabas into a vampire again, so they can go away together and live in eternal darkness or whatever. They have a mysterious little argument about how this works — apparently there’s timing involved.

Barnabas:  Well, it’s too late. You moved too quickly, you’ve been too anxious.

Angelique:  What do you mean?

Barnabas:  You can’t afford to let me die now, before you’re ready. Dawn is approaching…

I don’t have the slightest idea what they’re talking about here, and neither do they. There’s a real lack of clarity around how you turn somebody into a vampire on this show. We’ve seen three vampires so far, and it was completely different each time. None of them seemed to involve a lot of precision timing, so who even knows. As long as they keep busy, that’s the important thing.

It would actually serve them right if it turned out there wasn’t even such a thing as vampires, and all of these people were just super suggestible. It makes just as much sense as anything else. 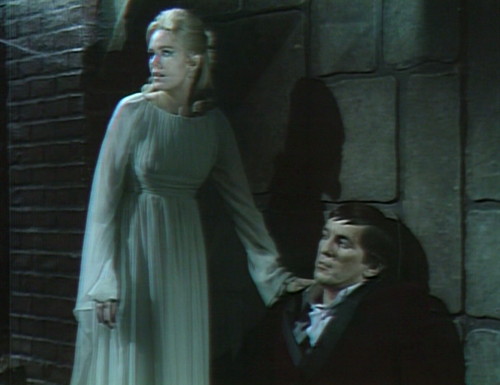 Then they get a little bulletin from our old friend, the Convenient Rooster, who’s always in earshot wherever you happen to be. He must be from one of those “near the sea” farms that keep popping up on coastlines.

So Angelique has to make tracks for her coffin, which is somewhere else, and she has to leave Barnabas here, wherever this is, and hope that he doesn’t die until the right moment, which I’m not sure when that’s supposed to be.

It’s actually kind of difficult to talk about this episode, as it happens. It’s not exactly an intricate puzzle box of a plot. They’re mostly trying to skate by on atmosphere.

Back at Collinwood, Julia’s been up all night worrying about Barnabas. She knows that he’s been summoned by the vampire, and he’s in terrible danger, but she doesn’t really know what to do about it, which is a terrible waste.

Julia is the smartest character on the show, and a storyline is always 100% improved when she’s involved. We’ve seen Julia stare death in the face, dig up a grave, inject a rampaging monster with sedatives, and lie her way out of several felony charges. She can hypnotize someone and rewrite their memories using a penlght, a medallion, or a piece of crystal. You can basically hand her any small household object, and she’ll hypnotize somebody with it. Julia is a rock star.

She shoud be out there shaking the bushes, tracking down leads. She could at least stand at the front door and yell “Barnabas” for a while. How hard could that be? But instead, she’s sitting on the couch and talking to Vicki, which is pretty much the opposite of interesting. I can’t figure it out.

At least Barnabas is on the move. He’s drained and weak, but Angelique left him alone for the day, and he’s still got enough energy to make for the door. Apparently nobody ever explained to him about the honor system.

So I admire the spunk, but I have to take exception to the way he thinks this through. He starts off strong, but his logic takes a weird turn.

Barnabas (thinks):  But where can I go, where she won’t find me? Who can help me? Julia? No — Angelique would think of her, and might harm her. I can’t go back to Julia. Or Willie. Not even Stokes — she’d suspect him, too.

Barnabas (thinks):  Oh, there must be someone who can help me! Someone…

Then he gets the brainstorm.

Barnabas (thinks):  Vicki! Yes. Angelique knows how I feel about Vicki, and she would think that I wouldn’t go to her in my condition. Yes! Yes, Vicki! She’ll find safety for me!

And that, I’m afraid to say, is the thought that motivates him to get up off the floor and stumble outside.

Julia gets sent upstairs to bed, and this whole scenario turns out to be another vague handwave toward the idea that Barnabas and Vicki share some tragic romantic destiny, despite all evidence to the contrary.

The last time they even had a scene to themselves was six weeks ago. Since then, Vicki’s been spending time with her actual fiancee, and Barnabas has been hanging out with Julia and Stokes and the other interesting characters.

But they keep coming back to this weird idea that Barnabas and Vicki have anything to do with each other. Every time the writers have some big Barnabas-related plot point, they throw him at Vicki for a couple of days. It’s maddening.

And this time, it’s even worse than usual, because Barnabas just admitted that the obvious person to turn to is Julia. But Angelique would think of Julia, so he has to go through his emergency contact list until he finds somebody that Angelique wouldn’t suspect. That proves that he doesn’t actually have any real connection to Vicki, and that’s why she’s the perfect co-star for the romantic destiny moment. I don’t even know what to do with that logic.

Vicki confronts Roger about his opinion of Jeff: “Why do you feel hostilities toward him?”

As dawn approaches, Barnabas looks helplessly at Angelique, and forgets his line. He says, “You — you ca –” and then turns toward the teleprompter. “– not going to leave me here,” he adds.

When Barnabas struggles to his feet, he rests a hand on a wooden pillar, which wobbles.

Gordon Russell’s name isn’t fully pasted down on the rolling credits — as the writer credit goes by, you can see Russell’s name flapping, and “Ron Sproat” visible underneath it.