“I was just having one of my moments of inexplicable hysteria.”

Here’s what the world sounds like before Roger shows up:

Jeff flashes a casual grin. “Well, I don’t know what could be plainer. I think we should get married next month, at the latest.”

“You know what I mean,” she frowns, and he doesn’t, and neither do I.

How exactly could you get yourself into this particular conversational logjam? Jeff comes bounding in, all smiles, and she’s just staring daggers at him. Jeff says, Hello, Vicki! So happy to see you. He gives her a kiss. She glowers at him. He says, Guess what I’ve been thinking about. She sighs and frowns. He persists: I think we should get married next month, what do you say?

And that, apparently, is where we came in. I can’t really picture it. It’s possible that I’m over-thinking this.

But it’s a Ron Sproat script, and it’s Vicki and Jeff, and they’re pretty much doing a reprise of every conversation they’ve had for weeks, and then Eve is outside staring in the window for almost no reason at all.

I know I said some nice things about Sproat yesterday, but now he’s just taking advantage. He’s basically coming in and saying, I think Vicki and Jeff should talk about getting married, what do you say? And the viewing public says: I don’t understand you, Sproat. Really, I don’t.

So Jeff and Vicki stand there and say more words to each other, and Jeff indulges in some faceplay. Jeff spends a lot of time rubbing his head for one reason or another, but when he has some spare time, he’ll touch other people’s heads too. It kind of depends on whose head is in range at the moment.

Eventually, he goes out onto the terrace, and there’s Eve, a stunning redhead Bride of Frankenstein type monster in a flowing black evening gown. I don’t know how people on this show manage to sneak around all over the landscape wearing these kinds of outfits. It’s not like Eve lives in the mansion next door; she’s staying at Nicholas’ place, which is all the way across Collinsport. I can’t remember the last time I tried a cross-country trek in a flowing black evening gown, but I have to imagine it wouldn’t take long before somebody noticed. Does she even own sweatpants?

Anyway, she’s here because she’s stalking Jeff, who she’s decided is actually the reincarnation of Peter Bradford, an 18th century lawyer who has magically transcended the limits of time and death in order to make good on his promises to a time-traveling governess. She believes this because she is pants-crappingly insane. I mean, it does happen to be true, but that’s probably just a coincidence. Everybody makes a lucky guess once in a while. 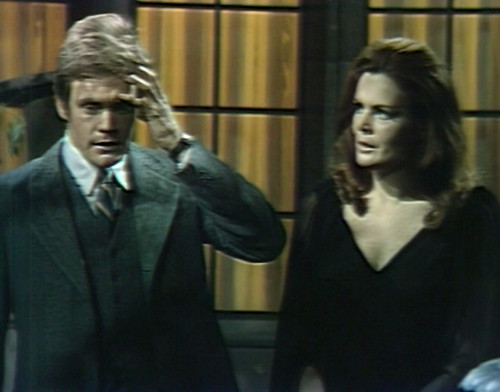 Jeff:  Stop calling me Peter. It’s not my name, and it never was.

I don’t know if people on other TV shows talk about “the past” as much as they do on Dark Shadows, because I’ve been watching this stuff so long that I can’t really remember what other shows are like. It’s tough to make this dialogue sound natural, especially for these two. 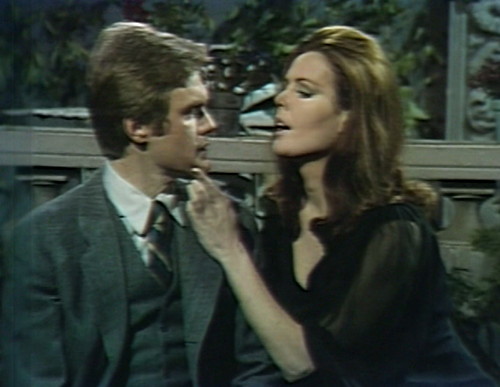 I mean, I love Eve. Absolutely love her. She can sashay around and make weird faces anytime she feels like it. But everybody has to stop touching everybody’s face for a little while.

And then, from out of the past, comes the thundering hoofbeats of Roger to the rescue!

Startled by Roger’s arrival on the terrace, Eve dives into the underbrush and disappears. That’s a good tactical move, because it turns out Roger takes exception to people hosting speed-dating events on his property.

Roger:  What a stunning woman. Who, may I ask, is she?

Roger:  Really? I had the distinct impression that you were rather well acquainted.

It’s been a while since we’ve had a Roger-to-the-rescue episode, and I’d forgotten how much I enjoy them. This is actually one of the things that Sproat does well, these little slices of sarcastic melodrama.

It’s not really going anywhere in particular — either this episode, or this blog post — so I think I’m going to follow the show’s advice, and just fill up the empty space with Jeff touching his head and Roger being wry.

Jeff:  All right, then. Think what you want to. But it was a mistake.

Roger:  I agree with you there. But, fortunately, it was a mistake that has been discovered in time.

Jeff:  What do you mean?

Roger:  Apparently, we’ve all been more than a little mistaken about your character.

Jeff:  Look, I’m not talking about my character.

Roger:  But it would be a greater mistake not telling Vicki.

Roger:  Really, Clark. Did you think for a second that I wouldn’t?

Roger:  Well, it would be an exercise in futility.

It’s lovely. This is one of the reasons why daily soap operas can be fantastic; there’s practically no limit on the tone. You can do terror and romance and farce and suspense and whatever the hell this is, and it doesn’t really matter if it’s not consistent from one scene to another.

The once-a-day-forever format gives a soap opera a lot of space to fill, and the overlapping storylines means that everything has to slow down, and take place in more or less real time. You see the characters wake up in the morning, go to work, have lunch, and so on.

There’s so much detail that it starts to approach a representation of a real person’s life — and everybody knows that a real person’s life doesn’t keep a consistent tone all day long. House of Cards always has to be intense, because you only see the moments when people are doing intense things. After they push somebody in front of a train, you don’t follow them to lunch.

So we all head inside, and Roger tells Vicki that he has something distressing to tell her, and it concerns someone who’s very dear to her. Jeff stands by, not touching anyone’s head for a change, and reminds Roger that what he’s going to say will ruin the happiest moments in Vicki’s life.

Roger looks at Vicki — the girl that he inexplicably thinks of as a member of his family — and he can’t do it. She’s so happy, and he can’t bear telling her about what he’s seen.

Instead, he does this.

Roger:  (chuckles) Yes… it’s nothing that can’t be discussed later.

He sits down with her, and assumes a cheerful expression.

Roger:  Well — it’s just that I went to the Old House to see Barnabas, and I… I couldn’t find him. It’s as simple as that, you see.

Vicki:  You went to the Old House, and —

Roger:  Yes, I looked for him, and I couldn’t find him. I expected him to be there, and — and he wasn’t!

Vicki:  Do you think something’s happened to him?

Roger:  No! I was just having one of my moments of inexplicable hysteria. Now, what reason would Barnabas have to be there, simply because I expected him to be? There’s none at all. 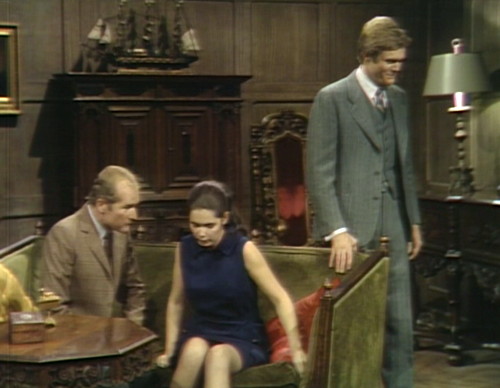 It’s adorable, and Roger Davis has to turn away and try to keep himself from laughing.

Vicki:  But you sounded so concerned.

Roger:  Well, it was just my temporary hysteria, unfounded and ridiculous. Please forgive me.

So it all works out okay, for Jeff and Vicki and the audience. We got a nice, funny Roger routine, we don’t have to hear Vicki grieving over her broken engagement, and Jeff gets to stand there and touch his head all damn day if he wants to. The end.

At the beginning of the first terrace scene in act 1, the water in the fountain isn’t flowing. A second later, you can see the water get switched on.

When they go back to Liz and Vicki in the drawing room, you can still hear the water flowing from the other set.

Arguing with Jeff on the terrace, Eve turns and finds that a branch is in her face. She sweeps it away dramatically, and continues the scene.

In act 2, Roger is clearly a lot more on point than Jeff is with the dialogue. At one point, Jeff says, “Why?” — and seeing that Roger is pausing, says, “Look, wait.”

In act 3, a music cue starts too late during the transition from Jeff and Vicki in the drawing room to Liz and Roger upstairs. The cue has to be cut off early.

Roger is apparently sleeping in a room with at least three lamps on.

The minister glimpsed briefly in Roger’s dream is played by Timothy Gordon, a regular fill-in actor who’s mostly been seen as Zombie Jeremiah, most recently at Barnabas’ ghost trial in June. We’ll see him again as a spectator at a hanging in January.

One of my favorite props, the Ralston-Purina lamp, is standing on an end table in Roger’s room.