“Now, the background of the Collins shipping interests is, in many ways, even more fascinating than the family history.”

I’m going to be honest with you, because there are no secrets between us: I don’t have a damn thing to say about today’s episode. It’s all about a secret plot between Barnabas, Julia and Professor Stokes to invite Nicholas over for the most boring dinner party of all time. The first half is basically just describing what’s going to happen in the second half, and then the second half is doing what they said they were going to do in the first half.  I can’t even discuss it.

If only there was something unusual happening in October 1968, which would provide some context for the period, shedding light on Dark Shadows’ pop cultural environment. That would give me something to write about. I just wish I could think of something.

Oh, well there’s this, I suppose.

This is “Fire”, the one hit created by one-hit wonder The Crazy World of Arthur Brown. It’s a psychedelic shock-rock number about the imminent destruction of civilization, performed by a spooky-looking dude in a helmet that is actually currently en flambé.

The song begins with a screech: “I am the GOD of HELLFIRE! And I bring you — ” and then it sort of develops the theme from there.

I don’t know if you’ve ever heard this song before, but if this was October 1968, you sure would have. “Fire” was on the Billboard Hot 100 chart for 13 weeks, peaking at #2 on the week of today’s episode. The only thing that kept it from being the number-one single in America was the Beatles’ “Hey Jude”.

Think about that. There’s “Hey Jude”, and there’s “Fire”, and then there’s everything else.

So here’s Arthur Brown, wearing spooky black and white makeup, a loose white robe and a flaming hat. I hope you’ve watched the video, because I don’t think that I can adequately describe how extraordinary he is.

He dances in this serpentine way that’s just mesmerizing — nobody else moves like that. He’s a true eccentric, an artist who’s aware that he’s doing something deeply strange, and committing to it one hundred percent.

He’s backed up by a Hammond organ, bass and drums, a sound that’s not that far from the Doors’ “Light My Fire”, which we talked about last month. But where Jim Morrison’s “fire” was a metaphor for his brooding sexuality, Arthur Brown’s is intentionally destructive and all-consuming.

You fought hard, and you saved and earned
But all of it’s going to burn
And your mind, your tiny mind,
You know you’ve really been so blind,
Now’s your time, burn your mind,
You’ve fallen far too far behind

He’s a prophet of destruction, cackling “I’ll see you burn, burn, BURN!” And then halfway through the song, he has to take off the hat, because it’s not insulated and it really is hurting quite a bit.

He also strips off the robe, revealing his bare torso, which shows off his unique, loose-limbed approach to dancing.

Fire
To destroy all you’ve done
Fire
To end all you’ve begun
I’ll feel you BURN!

So you have to ask, I think, what is the appeal of a singer who wants to throw everything into a furnace? I mean, it’s obvious why “Light My Fire” struck a chord with the public, because everybody — you, me, and the entire population of the world — wants to have sex with 1967 Jim Morrison. It’s a universal constant. But that’s clearly not what’s going on here. 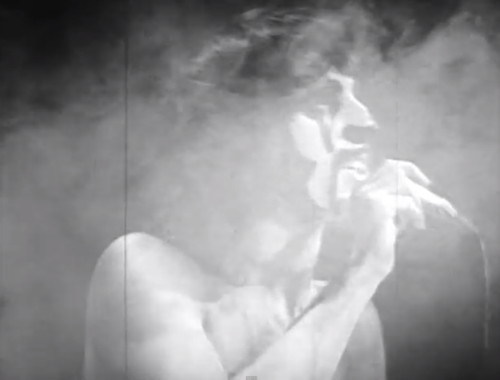 This is an early example of shock rock, a genre that was pioneered by Screamin’ Jay Hawkins in 1956, who started his live show by coming out of a coffin amid billowing smoke, crooning “I Put a Spell on You” into a skull-shaped microphone. He was followed in the 1960s by Screaming Lord Sutch, who dressed like Jack the Ripper and menaced the audience with knives and daggers.

People think of 1960s music as being dominated by “All You Need Is Love” and other LSD-fueled hippie tunes, but there was also an angry, destructive streak — the Who smashing their instruments mid-concert, Iggy Pop rolling in broken glass, and Jimi Hendrix setting his guitar on fire at the Monterey Pop Festival. They really had a thing for fire in the late 60s.

The teenagers of the 1960s became a universal symbol for youthful rebellion because they discovered two mutually exclusive ways to drive their parents insane — loving everybody, and hating everybody. You could transform the world by retuning your mind to the Age of Aquarius, or you could tear down everything that exists, just for the sheer joy of watching it burn. It was a one-two punch that had adults on the ropes, and frankly, they’ve never really recovered.

It’ll be a little while before we see any stargazing hippies in Dark Shadows, but the gleefully destructive rage of shock rock has arrived. The woman they call “Eve” is inhabited by a psychopath who enjoys killing for its own sake, and the malevolent Nicholas Blair is engineering the end of the human race.

In fact, pretty soon Dark Shadows will literally go to Hell. Better hold on to your hats — except for Arthur Brown’s, obviously. It’s probably best if we leave that one where it is.

Barnabas says, “Julia, I’m surprised at you. I’m hardly a psychologist, but obviously, the — your dream was — well, it was perfectly obvious.”

When Stokes and Nicholas come downstairs at the start of act 2, the bannister wobbles alarmingly.

Julia has a terrible cough in this episode. In act 2, she coughs as Barnabas crosses the Old House drawing room to answer the door. In act 3, she coughs while Barnabas explains Liz’s condition to Nicholas, and again as Barnabas is leaving the house.

As Barnabas folds up the map of Nicholas’ house, he says, “I’ll take this with me, and I’ll review it earlier — later this evening.”

Arthur Brown is still around and making music, by the way. Check out Arthur-brown.com for his latest work. Also, Blues.gr has a 2012 interview with him, and he is apparently the sweetest guy in the entire world.