“Your hatred for me could never be as strong as mine is for you.”

Fictional characters, if you want a quiet life, listen up: Stop declaring your arch-enemies out loud.

It’s difficult, I know. You’re out for a stroll along the Reichenbach Falls, idly juggling a lightsaber with your two working hands and thinking about Gwen Stacy, your totally alive girlfriend, when all of a sudden, there he is — the One Who Must Not Be Named, waxing his mustache with Kryptonite and standing next to a sign that says Rabbit Season.

You draw back with a gasp, and the words spring unbidden to your lips — Aha, it is you, we meet again! The battle is joined. If you strike me down, I shall become more powerful than you could possibly imagine. I tawt I taw a puddy tat. And so on.

This is the moment. Take a breath. Remember your training.

And then you say, “Hi there. Have we met? I’m sorry, I am just terrible with names.”

The thing you don’t do is look them in the eye, and say, “I will never be rid of you, will I? As long as I live, you will exist to torment me.”

I mean, that’s just asking for trouble, really. You’re setting yourself up for an endless series of rematches.

So here’s today’s iteration of the eternal kaiju battle between ex-vampire Barnabas Collins and his ex-wife, Angelique.

Barnabas has actually been free from his vampire curse for about seven months, thanks to a mad science experiment that turned out to be a narrative dead end. Everybody in the audience knows the show as the story of “the reluctant vampire, Barnabas Collins,” but by this point, he’s been human for about as long as we ever knew him as a vampire.

It’s a weird choice, really. The show was drifting gently towards cancellation, and adding a vampire to the cast turned Dark Shadows into a huge, unexpected hit. But in order to keep him on the show as a viable long-term character, they decided to make him human, which was a reckless act of self-sabotage. They found themselves in charge of a blockbuster vampire soap opera, and promptly benched the vampire.

They’re going to have to correct that situation at some point, but meanwhile, they’ve come up with the next best thing, which is to turn Angelique into a vampire, and have Barnabas be the victim.

This is obvious fanservice, and I for one appreciate it tremendously. Plus, it’s only two minutes into the new status quo, and they’re already teasing us with the next obvious step:

Barnabas:  What are you planning to do?

Barnabas:  You’re — you’re going to make me revert to what I was.

That’s pretty much the perfect Dark Shadows response: “Possibly.” In other words, we’re making this up as we go along, and we have no idea what we’re going to do next.

They’ve recently discovered the magic formula that makes the vampire storyline extra-enjoyable — having the victim struggle against the seduction. After the bite, his natural desire for self-preservation kicks in, and he desperately tries to get away — only to be lured back into the vampire’s clutches again.

That moment when the guy stops fighting and allows himself to be swept away by the pleasure of submitting to the vampire — they can basically do that forever, and the audience is going to be thrilled by it every time. Angelique has spent the last couple of months snacking on every cute boy in the cast, and now we get to see that dynamic play out with one of the show’s eternal supercouples.

So Angelique says “Each time we’re together, you will need me more,” and Barnabas says, “I’ve got to get away from you!” and it’s basically perfect.

The best moment in today’s episode is when Barnabas staggers down the hall, trying to get away from the mad seductress. He gropes for the exit… 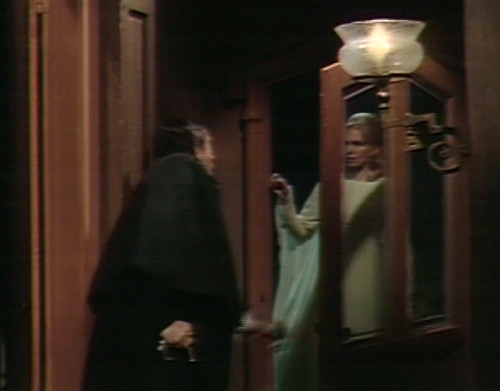 And there’s Angelique, waiting for him at the door.

When he sees her, he actually screams, “OH, NO!” which is one of the great slapstick moments of Dark Shadows. It’s the sexy live-action Droopy cartoon that you never knew you needed to see.

So it’s just delicious, and seriously it’s about damn time Barnabas was actually directly participating in the story again.

The really weird thing about the decision to cure the vampire and keep him on the show anyway is that they never gave him another job. He’s not a detective, or a doctor, or any of the usual professions that keep soap opera characters involved in a storyline. He’s not even that engaged with being the gay bachelor uncle dispensing advice to his young relatives.

In fact, this whole Bride of Frankenstein story has pushed Barnabas into the role of interested bystander. Julia is the mad scientist who brought the monster to life, and Professor Stokes is the Watcher who looks up the demon-hunting cheat codes in the school library. Barnabas has basically just been supervising.

Thanks to Angelique, he’s finally involved in the storyline again, and by involved I mean that he’s leaking body fluids. 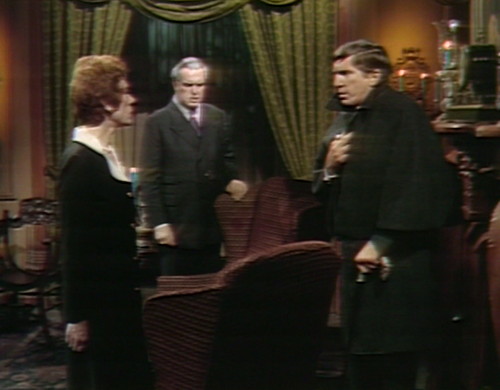 Now Barnabas is playing for the other team, and he has to go tell Julia and Stokes that everything is totally fine over at Nicholas’ place. His entirely convincing cover story is delivered in fluent Fridspeak.

Julia:  Because we were so certain that Eve was in that house. We had proof!

And then he sits down, with his cape pulled up to his ears, like you do when everything is completely and utterly fine. 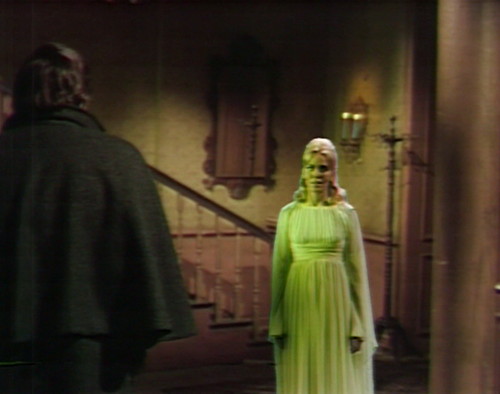 So they’ve figured it out, at last — a front-burner storyline where they get to use all of the marvelous narrative tricks that they’ve learned over the last year. In fact, they’re so excited about it that they have Angelique come back at the end of the episode to give Barnabas another bite.

It’s a bit of a shame that they mess up the special effect, because they’ve been doing so well with the Chromakey lately, and this shot makes it look like Angelique is part of the dwarf Stonehenge number in This Is Spinal Tap.

But who cares? They’ve got revenge, and betrayal, and seduction, and vampire bites. The show is officially back on track.

Tomorrow: In a World of Turtlenecks.

In the teaser, when Barnabas pulls back the blankets and sees that Eve’s bed is empty, there’s suddenly a burst of activity in the studio — people shuffling around, whispering, rustling paper, and the squeak of a chair being pushed back. It doesn’t really help to sell the “I’m unexpectedly alone in this room” vibe that they’re trying to accomplish.

In act 1, as Angelique stands up and tells Barnabas, “You’re mine,” she trips on her own gown and stumbles for a second.

Angelique smiles and stares at her reflection in the mirror. Julia established a while ago that vampires can’t be seen in mirrors, but this isn’t the first time Angelique has openly disregarded that rule.

The armchairs have moved position in the Old House drawing room since we saw them at the end of yesterday’s episode. Apparently, the late-night festivities included dragging the chairs around the room.

Professor Stokes says, “You found no sign of Adam,” and just as Barnabas begins to answer, Stokes continues, “– or Eve, none at all.”

Tomorrow: In a World of Turtlenecks.