“When you see his neck, Julia, you will know at once whether or not I am right.”

Julia walks into a haunted house, and finds a vampire sitting in an armchair.

“Barnabas, you look exhausted,” she says, because this television show takes place in a world where people worry that the living dead don’t get enough sleep. 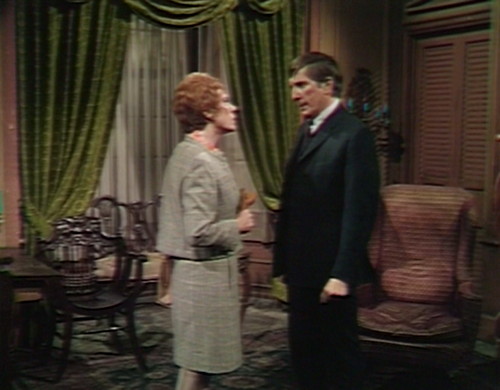 Barnabas sighs, and says, “Julia, I thought that when we were rid of Cassandra, our troubles were over, but apparently, they were just beginning.”

This is good news — not for them, obviously, but for us, because that’s how you kick off another meeting of the Junior Detectives. They’re going to spend the next four minutes doing a two-handed recap of all of the storylines that they’re worried about, brainstorming solutions as they go. They do a round-up like this every once in a while, and it’s one of my favorite things about the show.

Now, in general, I’m firmly against tedious recap scenes where ill-informed characters sit around and discuss mysteries that they just don’t have enough information to actually figure out. But Barnabas and Julia recap scenes are a notable exception, for several reasons. 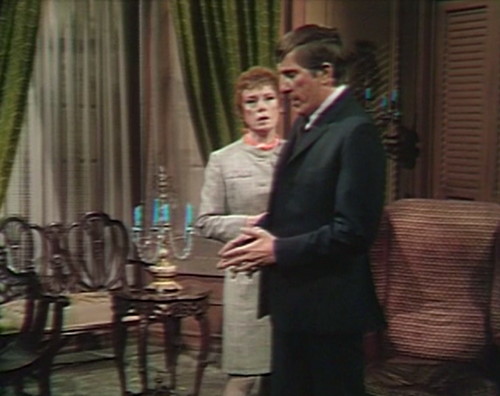 For one thing, there’s the blocking.

Grayson Hall is one hundred percent determined to hit her mark for every shot, because she emits several unique facial expressions per minute, and she doesn’t want the audience to miss any of them. Her co-star, Mr. J. Frid, can’t bother to remember where he’s supposed to stand, because he’s too busy worrying about the dialogue that he can’t remember how to say. This dynamic creates a fascinating little dance that’s rarely seen on network television.

While Julia says, “Barnabas, tell me what’s happened,” she’s moving into position for the next shot. But he’s just looking down at his hands, summoning up the mental energy required to recall his next line. He stays fixed, an immovable object, which means that now he’s standing between Julia and the camera. This is intolerable. 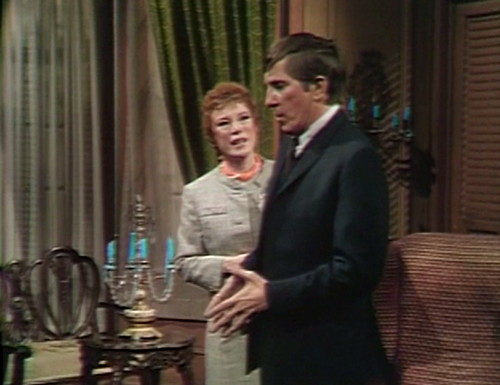 So when he says, “Adam was here again last night,” Julia actually leans to the right to say her next line, to make sure that she stays on camera. This is a move that could fit smoothly into an I Love Lucy scene, where Lucy and Ethel are upstaging each other while performing a play to raise money for their women’s club. 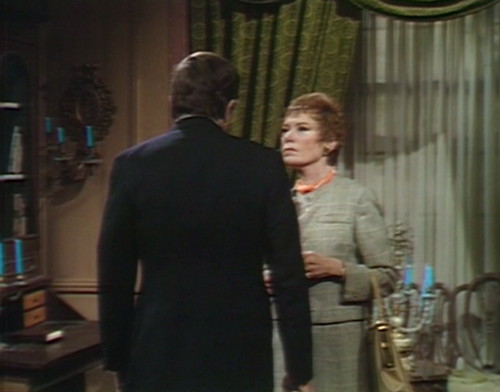 Barnabas takes the hint, and he starts to move, traveling vaguely in the direction of his mark. He’s not entirely sure where that is, so the two of them have to shuffle awkwardly around each other, while Barnabas says his next line. 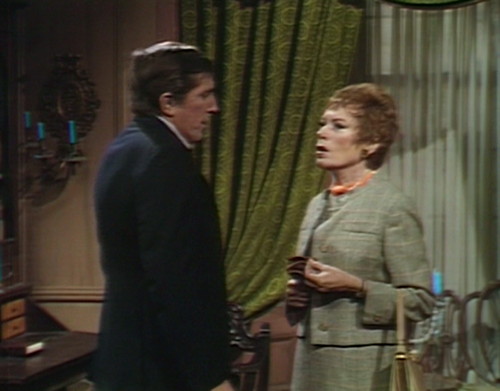 And he’s not even facing the teleprompter anymore, which means there’s a critical systems failure, and we’re only thirty-five seconds into the scene. 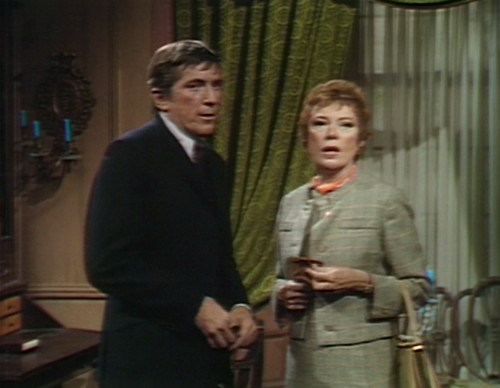 Stuck in a dialogue-chicken stalemate, they both turn to look at the teleprompter at the same time.

Julia:  — he knows where Vicki is.

Barnabas:  Knows where she is, and is prepared to kill her if we don’t give him what he wants. 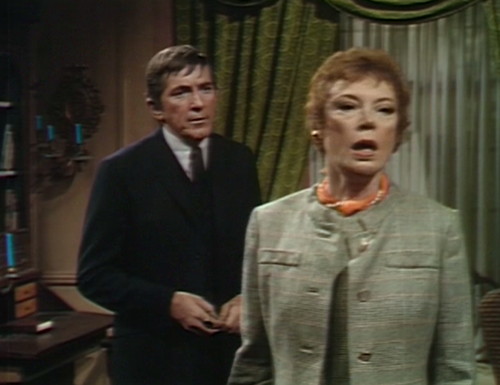 So they’ve finally got that settled, and now it’s time for a new shot. It never ends with these two. 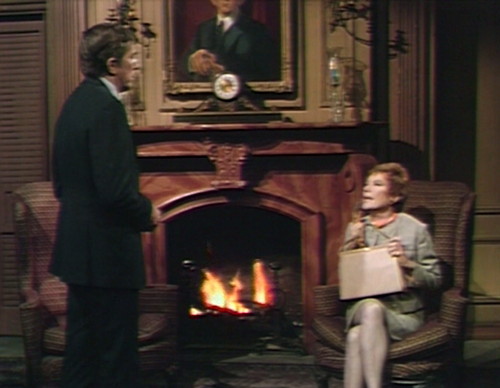 Another reason to love these scenes is that Barnabas and Julia can say basically anything to each other.

Julia:  Oh, Barnabas, I know how you feel, but it isn’t a matter of simply giving in to him. Another experiment is out of the question.

Barnabas:  But IS IT? 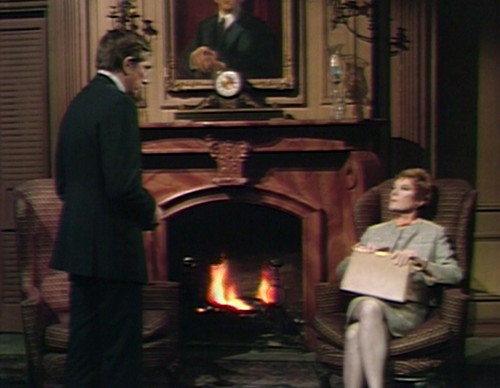 And then they just glare at each other. It’s fantastic. 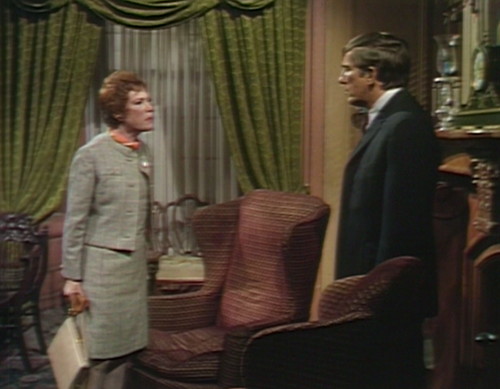 Julia’s on the move again.

Julia:  Look at the damage we’ve already done! Look what Adam has become! The thought of a mate for him is frightening! Do you realize we’d be responsible for creating a — a race of monsters? 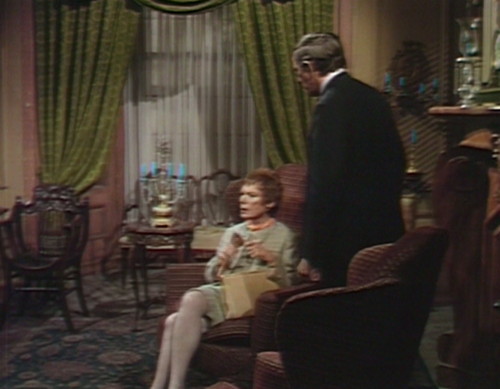 Barnabas says, “Then what are we going to do?” which means it’s time to start spitballing solutions.

Barnabas:  Do you really think that Stokes could do something like this?

Julia:  When you stop to think about it, Barnabas, how much do we really know about him? 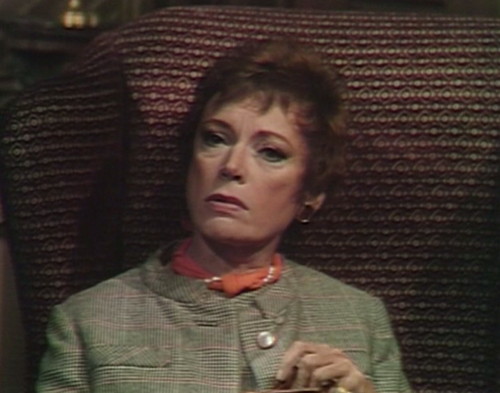 She goes through a cycle of facial expressions.

Julia:  We do know that he took Adam in… He protected him, and he taught him how to read and write. 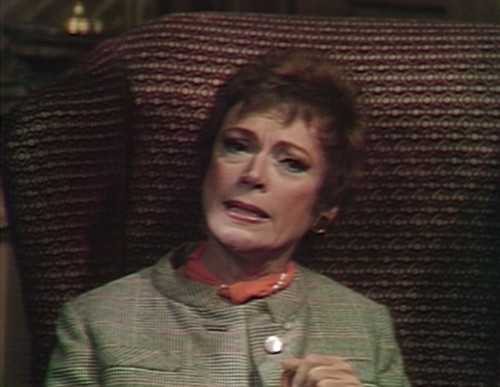 Julia:  What we don’t know is WHY he did that. 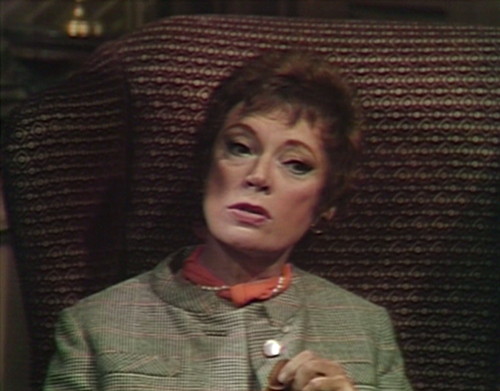 Julia:  Now, I think it would be worth our while to pay a visit to Professor Stokes. 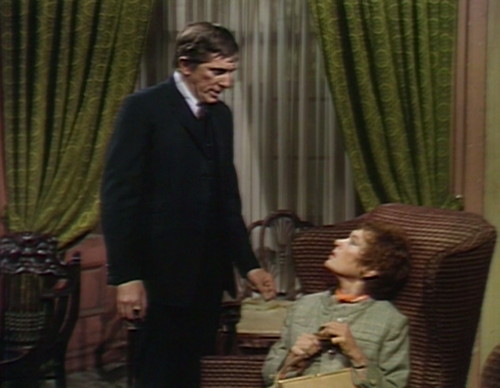 Barnabas agrees, but that’s not the only item on today’s agenda.

Barnabas:  I went to the hospital last night. I went to see Tom Jennings.

Julia:  Who is Tom Jennings?

Barnabas:  He was the man who was attacked, the night before last.

So now we’re off on a completely different lunatic story thread.

Barnabas:  Julia, I know what that man is suffering from, and so do you. We both heard the howling of the dogs the other night.

This is an example of the kind of dialogue that you simply don’t get on television shows that are written by sane people. 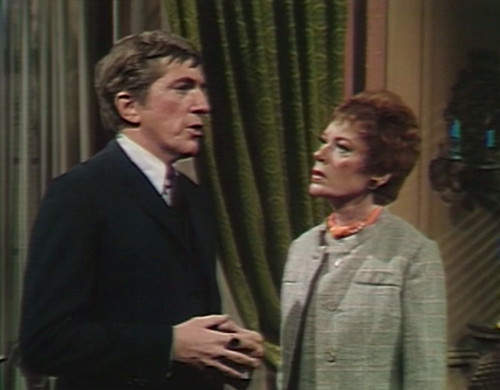 The point of these scenes is to see how long two adults can stand around in a room saying preposterous things to each other.

Barnabas:  That man, when he dies, he will be a vampire, and that will be two of them. And then no one living in this town will be safe.

Julia:  But, Barnabas, I can’t accomplish any more at the hospital than you can.

Barnabas:  You’re a doctor. Surely they’ll let you see the man. When you see his neck, Julia, you will know at once whether or not I am right. 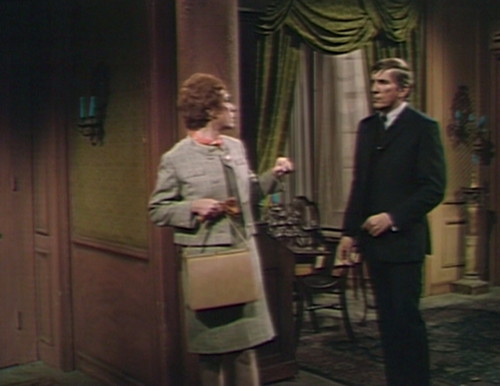 So now they both have little tasks to accomplish, and they’ll meet back here at the start of tomorrow’s episode for another Junior Detectives meeting. This is basically the format of the show now.

In addition to the weird blocking and dialogue flubs mentioned above, there’s also a moment when Barnabas tells Julia, “I want you to finish some other problems that we have here.”

When Barnabas walks Julia to the door at the end of act 1, the camera is pointed too high, and you can see the studio lights above the set.

In act 2, Jeff completely loses track of his lines, sighs, and looks directly at the teleprompter for about six seconds before he can go on with the scene.

When Adam lets Professor Stokes into his room, he slams the door behind Stokes, and it bounces back open.