“He may be eccentric or mysterious at times, but I don’t think he’s evil.”

But they totally forgot to teach him about right and wrong, which turns out to be kind of important. Oops!

Here’s Adam, the enormous adolescent Frankenstein man, who’s just learned that he was created in a mad science lab and is therefore not eligible to win the hand of the multi-millionaire heiress that he has a crush on. Naturally, he finds this upsetting, as anyone would.

But when Adam has hurt feelings, he tends to express himself through the medium of kidnapping and confining young women, which is inconvenient for everyone.

At the moment, Adam has governess Victoria Winters locked up in a safe house somewhere, and he’s demanding that Barnabas create a mate for him, or he’ll kill Vicki. The idea that this might be the perfect opportunity to rid themselves of an exceptionally irritating governess does not appear to have occurred to anyone.

Professor Stokes is trying to make up for lost time in the moral education department.

Stokes:  I sympathize with your feelings. Perhaps what you want from Barnabas is right. What is wrong is using an innocent person to get it. Victoria Winters has nothing to do with all this. She is not to blame for the desperation and loneliness you feel!

Adam:  Professor, you say that it is wrong to hurt someone who is innocent. Well, Barnabas hurt me; he is responsible for what I am. And he didn’t even care enough to make me in a way that I can be loved! But he will care. He loves Vicki, and he knows if he doesn’t give me what I want, he will never see her alive again.

So what we have here is an oppressed minority — a minority of one, in fact, which is as much of a minority as you can possibly get — who’s realized that he’s been subject to systemic disadvantages imposed by people who are more powerful than he is, for reasons that he doesn’t even understand.

He’s taking action to force the powers that be to listen to his grievances, and bring about social change. Now he’s being scolded by a well-meaning but ultimately disinterested onlooker, who objects to his tactics, but doesn’t present an alternative plan for addressing the fundamental problems. 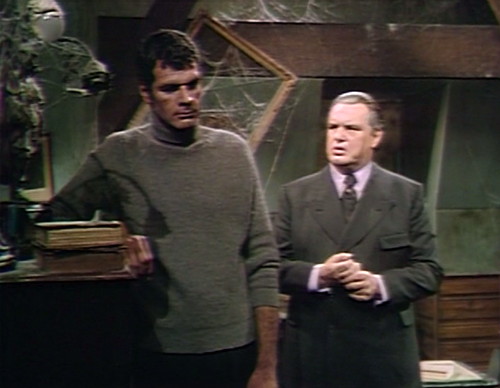 So let’s take a look at a couple of headlines from this tumultuous year.

In July 1967, President Lyndon Johnson appointed the National Advisory Commission on Civil Disorders — known as the Kerner Commission after its chair, Governor Otto Kerner, Jr. of Illinois — and  tasked them with analyzing the causes of the race riots that swept the United States during “the long, hot summer” of ’67.

There were 159 riots in American cities in 1967, the most devastating in Newark and Detroit, where protests over the unfair treatment of African-American citizens by the police turned into generalized looting and destruction, which was exacerbated by the deployment of National Guard and Army troops.

In February 1968, the Kerner Commission published its report, which made a rather startling conclusion: “Our nation is moving toward two societies, one black, one white — separate but unequal.”

According to the Commission, the cause of the riots was “pervasive discrimination and segregation in employment, education and housing, which have resulted in the continuing exclusion of great numbers of Negroes from the benefit of economic progress.” Furthermore, “the frustrations of powerlessness have led some Negroes to the conviction that there is no effective alternative to violence as a means of achieving redress of grievances, and of ‘moving the system.'”

President Johnson’s response to the report was to defund the Commission, ignore the findings and refuse to meet with the Commission members, which pretty much proved their point.

More riots, more pain. A week after King’s assassination, with devastating riots in 110 cities, and Marines with machine guns standing on the steps of the Capitol building, Johnson signed the Civil Rights Act of 1968, outlawing racial discrimination in housing.

So it turns out that maybe there really isn’t an effective alternative to violence as a means of achieving redress of grievances. 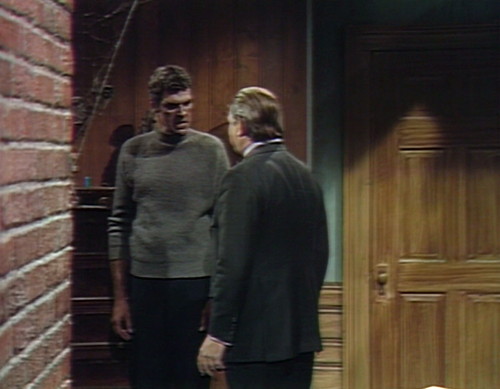 Now, it may seem bizarre to relate these real-world events to an imaginary conflict between Dracula and the Frankenstein monster on afternoon television, but that’s the cultural context for this episode, and I think everyone in the audience could see the correspondence.

Stokes:  You’re going about it in the wrong way.

Adam:  You think Barnabas will give me what I want if I don’t keep Vicki?

Stokes:  Adam — no matter how just your cause may be, you cannot achieve it by committing an injustice, don’t you understand?

Adam scowls, and mutters “Injustice,” and you have to admit the guy has a point. He’s completely alone in the world, forced to live in a filthy, disused part of an otherwise opulent mansion, and if he ventures outside during the day, he’ll be imprisoned and probably dissected.

Meanwhile, he’s visited every day by a series of wealthy white people, who all feel perfectly free to explain how important it is that he stay indoors and read Elizabeth Barrett Browning, possibly forever. Nobody engages seriously with the question of what kind of life he’s expected to stitch together from the limited scraps of opportunity that lie before him.

The Kerner Commission talks about “the frustrations of powerlessness,” but here’s Adam, actually living it. Look at that face. This is a riot waiting to happen. 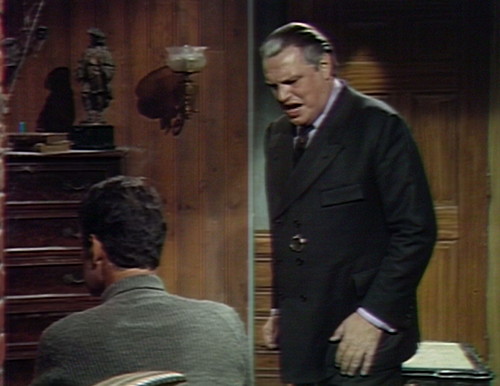 And here, unfortunately, is where you run into the limits of fantasy metaphor.

Stokes says, “This is a question which should be settled between you and Barnabas,” which may be true for the in-universe narrative, but isn’t a very helpful artistic response to real-world social disruption.

In a civil rights struggle, the opposing parties can’t just sit down together on equal footing and hash things out. Adam can walk into Barnabas’ house and confront his oppressor directly, but if you want to stop by Congress and express your views on discrimination, they’ve got Marines with machine guns on the Capitol steps who have a different idea of how that interaction is going to play out. 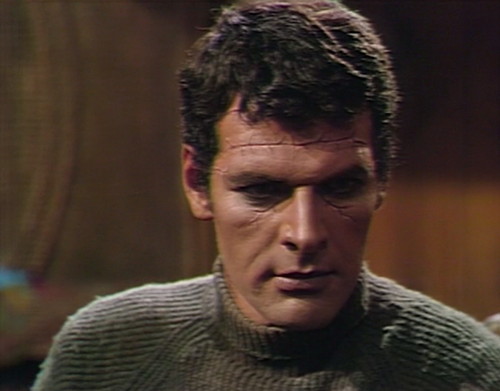 So the message that Dark Shadows conveys here is not exactly on the right side of history.

Everybody on the show keeps saying that Adam couldn’t have come up with this plan by himself — that there must be an outside agent who’s stirring him up with thoughts of rebellion. Even Stokes says, “You’ve been listening to someone else, haven’t you? Someone who’s been teaching you all the wrong things.”

And there is someone who’s feeding Adam’s unrest — Nicholas Blair, who is literally working on behalf of Satan to create “a new race” that will take over the world. As a metaphor for the civil rights struggle in America, this is staggeringly brutal.

There were voices in America in the 1950s and 60s who were placing the blame for African-American civil unrest on Communist instigators who wanted to destroy America. The underlying assumption was that Black people weren’t smart enough to notice their own oppression and organize to change the system — they had to be coached by sinister carpetbaggers like Nicholas Blair.

Now, I don’t believe that the Dark Shadows writers created this storyline with the intention of making it a cruel metaphor for Satanic forces inspiring the civil rights movement. In fact, I am absolutely certain that the Dark Shadows writers never had any intentions to do anything at all, except to come up with a story that would be interesting enough to produce another couple weeks’ worth of scripts.

This correspondence is completely incidental — the Cassandra story was running out of steam, and the Adam story was going nowhere, so they used Nicholas as a plot device to connect the loose storylines and keep the show running for another day.

But the idea that Professor Stokes refers to — “no matter how just your cause may be, you cannot achieve it by committing an injustice” — was just running through everyone’s heads in 1968, the same way that it is in 2015, and the way that it probably will for decades and centuries to come. And Dark Shadows, as absurd and disconnected from reality as it is, ends up wrestling with these concerns, just like everything else in American culture.

In the end, there is only one lasting message of fundamental truth here: If you have the opportunity to imprison Victoria Winters, then for God’s sake, please take advantage of it. You never know when you’ll get another chance.

Tomorrow: Everything You Deserve.

I edited one of Adam’s quotes above for clarity. What Adam actually says at the end of the teaser is, “He loves Vicki, and he knows — if he does not give me what he want, he will never see her alive again.” He means “what I want”.

At the beginning of act 2, Barnabas asks Stokes, “What did the two talk to — what did you both talk about?” When Stokes says that he doesn’t want to give them false hope about Adam’s plans, Barnabas cries, “Did you discuss that thing, or didn’t you?”

When Nicholas looks out of the window at the start of act 3, a fly buzzes around his head, and lands on his face several times. Nicholas has to subtly brush the fly away.

Tomorrow: Everything You Deserve. 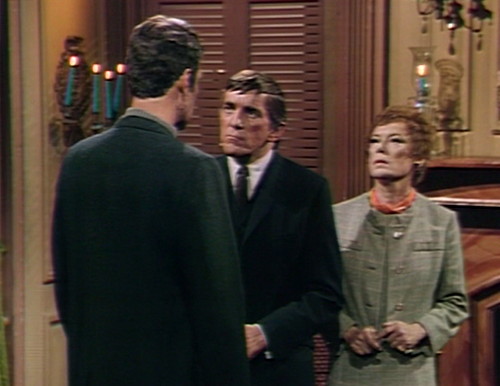