“Why would you imagine dogs howling?”

It was the best of times.

“Mail for the show recently has been running to almost 6,000 letters a week since Barnabas soared to fame, with Frid himself receiving nearly 5,000 of that total.”

“Ben Cooper has licensed a line of masks and costumes based on the Dark Shadows theme and featuring Barnabas. Western Publishing is also on the way with a boxed board game, comic books and puzzles.”

Call it magic or genius or just being in the right place at the right time, but apparently what American housewives and teenagers want more than anything in the world is a vampire soap opera at 4 o’clock in the afternoon.

“Several weeks ago, Frid appeared in three Stern Brothers stores in the New York City area as a guest at fashion shows displaying ‘Monster Shoes’ — the latest in girls’ and women’s footwear. Stern’s officials described his appearance as one of the biggest in memory.”

There’s just one problem: Barnabas Collins isn’t a vampire anymore. He used to be, once upon a time, but he was cured three months ago. Any viewers tuning in to see neck-biting will be sorely disappointed, and so will their 4.5 million friends. 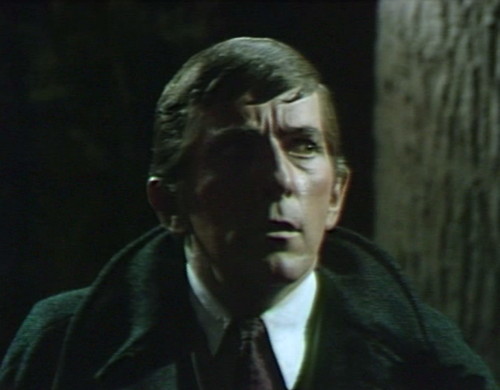 It’s a weird move for the show to make, taking the vampire out of the vampire show just at the point when the audience is really getting excited about him. The only way to explain it is that Barnabas had been tearing through the supporting characters, and that’s not sustainable long-term. Barnabas was popular, they wanted to keep him around, and the only solution that they could see was to make him human again.

So what we have on our hands at this point is a nerfed vampire. He’s not seducing innocent young girls anymore, or plotting to cut their boyfriend’s head off and wear it as a mask. This is the new, respectable Barnabas, who cares about other people and worries about his family.

All week, we’ve been talking about the danger of opening scenes with Barnabas sitting around and reading. Besides the aesthetic and narrative concerns, there’s also the practical, commercial angle. Nobody’s going to buy a Halloween costume depicting a fangless guy in a burgundy smoking jacket, curled up with a book.

So it’s a huge relief when today’s episode opens with some good old-fashioned dognoise.

Barnabas is out in the woods helping Jeff search for Vicki, who’s been kidnapped for some reason, but his heart isn’t in it. He hears dogs howling, which is apparently the early warning system for impending vampire skulduggery.

“They must sense something is happening,” he says to himself. “What could it be?” 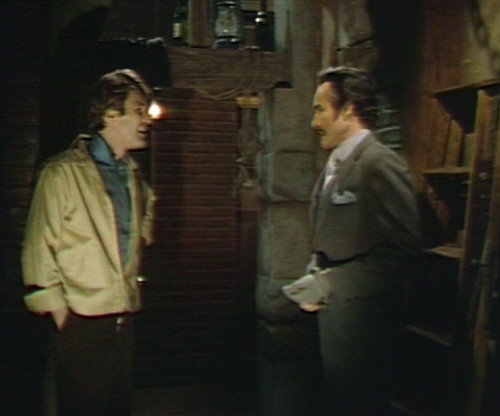 Well, I know what the dogs are so excited about, and here he comes — Tom Jennings, a local handyman who’s helping Nicholas fix up his new house.

Nicholas is a satanic sales associate of some kind, who’s recently moved to Collinsport to promote a mysterious new line of devilry. Nicholas was the supervisor of the wicked Angelique, the scourge of the Collins family, but she interfered with his plans, and he punished her by aging her into a dusty old bag of bones. Angelique expired in an armchair, and now she’s resting in peace, more or less, in a coffin in Nicholas’ basement.

But that shouldn’t make anyone suspicious, because who looks in basements? The only potential snag is if Nicholas hires a guy to fix the wiring and check on the foundations. Enter young T. Jennings, today’s lucky winner.

Tom is played by Don Briscoe, the cutest guy that they’ve cast in the last two years. The only hunks in the original cast were Joel Crothers and Mitchell Ryan, and Mitch left over a year ago, replaced by the unloved Anthony George. That left Joel as the show’s only eye candy, playing cutie-pie fisherman Joe Haskell in the present day, and the roguish Lieutenant Nathan Forbes in the 18th century.

But the show has been investing more heavily in the men’s department lately, starting with Roger Davis and Robert Rodan. Yes, Jeff is irritating and squinty, and Adam’s whole story is based around the idea that he’s Hollywood ugly, but they’re a step in the right direction.

And it’s thanks to Roger that Don’s on the show. They were college friends from Columbia, and Roger encouraged Don to audition. So it turns out Roger Davis is good for something after all. 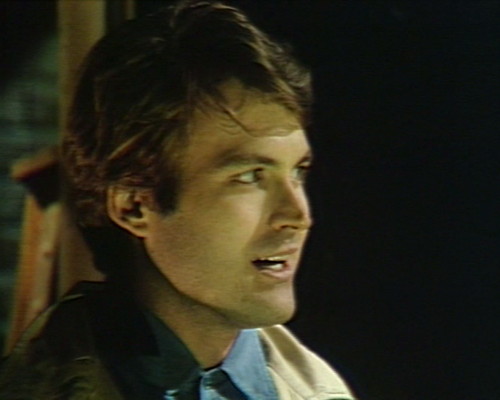 Don was born in Mississippi and raised in Memphis, Tennessee, and he gives Tom an aw-shucks, down-home Southern accent. I don’t know if anybody mentioned to him that the show is set in Maine, but if they did, then he must not have been listening.

But you can’t blame the guy for being nervous. He was fairly new to television — he’d been a recast for a minor character on Days of Our Lives for about two months, plus an episode of I Dream of Jeannie and commercials for Folgers Coffee and Palmolive soap. And now he’s here, the cute new boy on the hottest show in America, and he’s in the basement of a haunted house, trying to act like coming across a surprise coffin is a totally normal part of a person’s day. 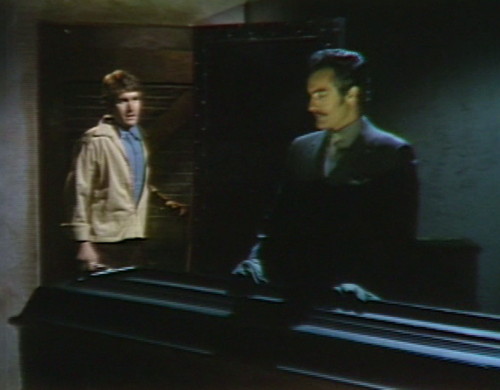 Tom is an especially interesting character for this moment on the show, because he’s the first example of something that we haven’t seen before — a regular Joe who happens to stumble onto the supernatural, and pays the price in blood.

So far on the show, vampire victims outside the Collins family have fallen into a few clearly defined buckets — con men, investigators, and prostitutes. None of them deserve their gruesome fates, of course, but in all three cases, the character is aware that they’re operating in a dangerous environment.

But Tom is the first guy who’s living a perfectly normal, carefree life, right up until the moment that he opens the wrong door. This is the point in the show when just living in Collinsport becomes a health hazard.

So it’s a big day for everyone — for the dogs, for Tom, and for the 4.5 million vampire enthusiasts tuning in from coast to coast. Dark Shadows has figured out what to do with a vampire show after your vampire isn’t a vampire anymore: you call in reinforcements. This might turn out to be an exciting summer after all.

Tomorrow: All Tied Up.

In act 3, Barnabas and Julia are talking in the foyer, and Barnabas is clearly reading off the teleprompter. Julia turns toward the drawing room, where another camera is waiting for the next shot. Barnabas stays where he is, facing the wrong camera, and he keeps reading his lines. You can tell that he’s not where he’s supposed to be, because the beginning of his next line, “He said he wanted his revenge,” isn’t picked up properly by the boom mic.

Tomorrow: All Tied Up.