Well, here we are again.

So Dark Shadows does what it always does when they run out of things to do, namely: Lock up a woman in a room and worry about her.

This comes up at least every couple of months — in June, it was Carolyn locked up in the root cellar, and before that, Vicki was in jail from January all the way to April, plus some extra credit confinement for Josette in February. Collinsport is hell on claustrophobics.

And we’re still coming back to this room, which is honestly kind of killing me. Adam’s been hiding out in the abandoned west wing of Collinwood while he’s studying for his GED or whatever, and I’m sick of the sight of it. For more information about Adam and this room, see: pretty much every episode for the last three weeks.

So now Adam is going to tie Vicki up in a closet, in what is basically a Russian matryoshka doll of hideouts, just one box nestled inside another. This does not make for inspiring television.

Then we go over to the Old House, where Barnabas is reading a book, which is not a good way to start a scene. In Monday’s post, I mentioned this regrettable trend of opening with someone knocking on the door while Barnabas is curled up with a book.

The main character on your soap opera should not have this much free time. It sets a bad example for everyone else.

Soap opera characters should always be doing one of the following things: kissing, crying, drinking, gossiping, running away from something, scheming, seducing, putting on a shirt, taking off a shirt, accusing, confronting, testifying, proposing, apologizing, divorcing, misplacing, switching babies, planting explosives in a wedding cake, quitting, slapping, suspecting, outsmarting, tampering with DNA test results, realizing at the last second, waiting for the killer to make a mistake, or opening a nightclub.

Reading is not on that list. We have no use for characters who read on television. 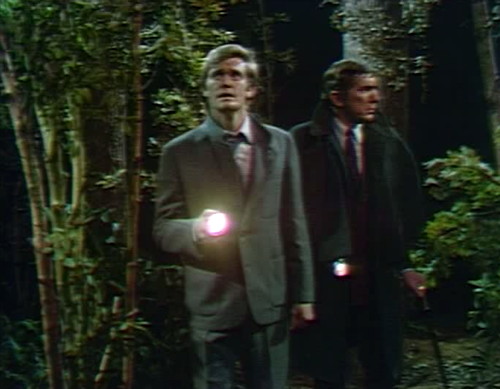 But once you’ve said that, there’s not a hell of a lot left to say about this episode. Jeff and Barnabas go out to search for Vicki in another one of Collinsport’s dry thunderstorms, where the sound effects say that it’s a raging hurricane and everybody else respectfully disagrees.

Now, we already know where this sequence is going, namely: exactly nowhere. Vicki’s tied up in the west wing, and unless she dropped a trail of popcorn as she was being abducted, there isn’t a lot of scope for dramatic incident out here in the woods.

This must be a Wednesday. Sometimes I think we should just skip over Wednesdays and go straight to Thursdays. Nothing worthwhile ever happens on a Wednesday. 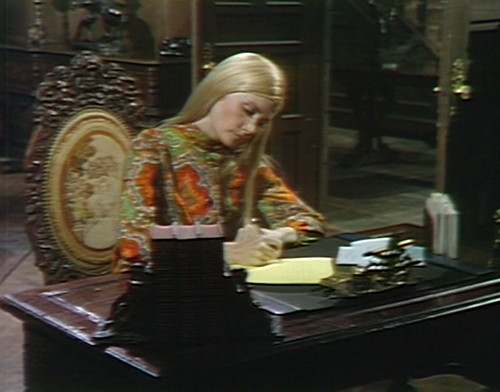 Next, we cross-fade to Collinwood, where Carolyn is writing something down on a piece of paper. This offers more dramatic scope than reading a book, but not by much.

There’s a knock at the door, and Carolyn looks up, but then she decides that someone else will answer it, and she goes back to whatever she was writing. 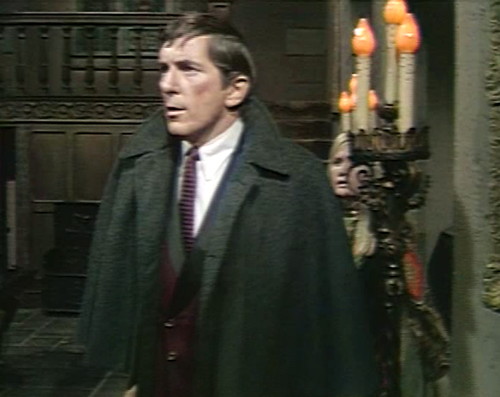 Eventually, it occurs to her that she’s on a television show, and they probably wouldn’t be pointing the camera at her unless they wanted her to do something, so she gets up to answer the door.

Barnabas comes in, and says, “I must speak to you at once.” Then he walks in front of her, and poses for the wrong camera.

Carolyn asks, “Is something wrong?” and Barnabas says, “I don’t know. That’s what I’m here to find out.”

And then it just kind of goes on like that until they hit twenty-two minutes and they’re allowed to stop. You see what I mean? Wednesdays.

In the teaser, when Adam picks up Vicki in the woods, the tree behind him wobbles alarmingly.

When Jeff tells Carolyn that Vicki’s been gone for two hours, there’s a series of thumps and crashes from the studio.

Barnabas has a pair of flashlights at the Old House, which he and Jeff use when they search the woods. Barnabas doesn’t have any electric lights in the house — he lives by candlelight — so I don’t know why he keeps flashlights on hand.

Barnabas says to Carolyn, “Vicki… aren’t you the least bit concerned that Vicki may be in danger?”

The closet in Adam’s room is brand-new; there was a brick wall there before. 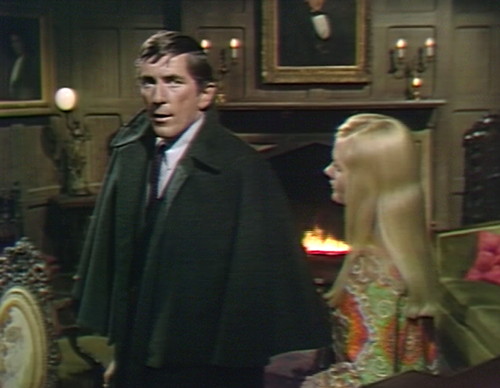