“Maimed and suffering spirits robbed after death in the name of false creation, I speak as your benefactor!”

Welcome back to another episode of Frankenstein in Love, the story that asks the question: Can this monster from a little mining town in the West find happiness as the wife of a wealthy and titled Englishman?

Here’s Adam, the jigsaw puzzle that walks like a man, currently hiding out in the abandoned west wing of Collinwood, reading poetry and developing a full-scale crush on the young mistress of the house.

From the audience’s perspective, the story’s a little tough to process, because everyone is supposed to act like Adam is a hideous God-defying abomination. In actual fact, he’s only Hollywood ugly, which means that he’s a very handsome man with some scars painted on his face. Also: he is a player.

I mean, he actually pulls a Green-Skinned Space Babe maneuver, using a classic reverse-Kirk formation.  If you’re not familiar with the technique, the best example is from “The Gamesters of Triskelion”, a second-season Star Trek story that aired in January 1968, about six months before today’s Dark Shadows episode.

Kirk:  The thralls have no freedom, Shahna. You don’t think or do anything but what the Providers tell you.

Shahna:  What else would one do?

Kirk:  Love, for one thing.

Shahna:  What is love?

Kirk:  Love is the most important thing on Earth. Especially to a man and a woman.

Shahna:  We, too, have mates. When it is time to increase the herd, my Provider wil select one for me.

Kirk:  On Earth, we select our own mate. Someone we care for. On Earth, men and women live together, help each other, make each other happy.

Shahna:  I do not think your words are allowed.

Which leads, inevitably, to this:

Kirk:  You can stop crying now, Shahna. It’s all right.

Shahna:  You risked bringing their anger on yourself. Why did you do it?

Kirk:  It’s the custom of my people to help one another when we’re in trouble.

Shahna:  And this. Is this also helping?

Kirk:  You could call it that.

Shahna:  Please. Help me once again.

And then obviously the punishment collars light up, and we’re off to the races. 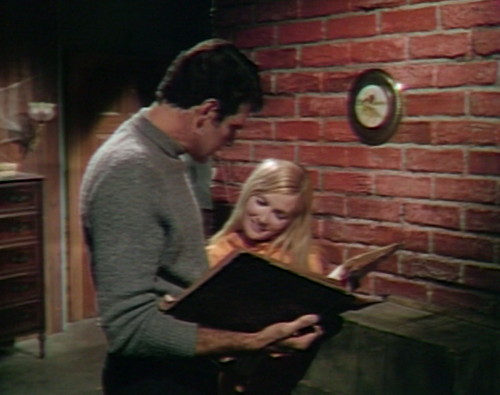 So here’s the Dark Shadows version.

Carolyn:  Well, it’s a picture of a couple, kissing.

Carolyn:  It’s — it’s what people do when they love each other.

Adam:  Love each other.

Now, Carolyn doesn’t really have a lot of interest in dyeing her hair green, so she gets uncomfortable, and says that she has to leave.

But Adam’s ready for her. Here’s the windup…

And that’s how the monster arrives at first base, well ahead of schedule. 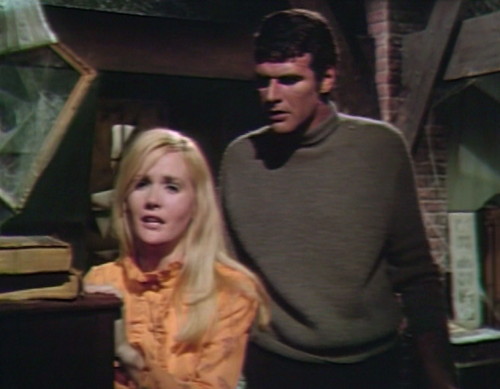 Carolyn:  Adam… you must never try to do that again.

Carolyn:  Because… well, because it’s not right.

Carolyn:  No, of course I don’t hate you, Adam. But we’re friends… and that’s all we ever can be.

Yeah, I don’t either. What the hell? Carolyn doesn’t have much of a social circle. She doesn’t have a job, she doesn’t go to school, and she mostly hangs around the house all day. She doesn’t know that many eligible guys her own age.

Now she’s got a gorgeous man-monster who’s desperately in love with her, stashed away in a secret makeout dungeon. What is the problem, exactly?

The next morning, Professor Stokes comes over to visit Adam, and bring him some books. Hopefully, it’s not Fifty Shades of Grey, or we’re going to run into some real difficulty.

Carolyn tells the Professor that Adam tried to kiss her, which Stokes finds disturbing. He tells her, “I’ll go up and talk to him, and give him these books. If I can persuade him to concentrate on his studying, I’m sure you’ll have no further trouble with him.”

They keep talking about Adam’s education; he’s apparently upstairs just reading nonstop. Is he going to take the LSATs? It’s hard to see where they’re going with this.

The birds-and-bees conversation is absolutely adorable.

Stokes:  Adam, you must be careful not to… not to like her too much. 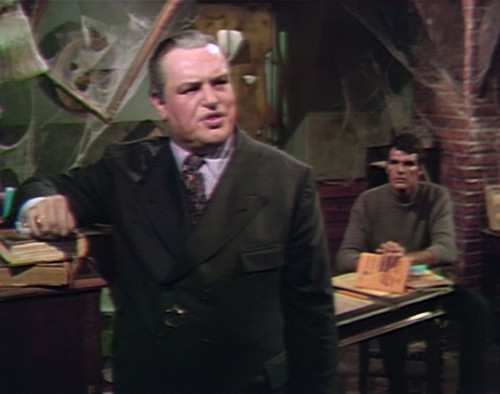 Stokes paces across the room.

Stokes:  Oh, dear me. If only I’d had the foresight to marry and raise a family, I’d be equipped to answer that most annoying of all children’s questions. Why indeed?

It’s so cute. You can always count on Stokes for a good scene.

Stokes:  Now, the most important thing for you is your studying. Everyone has… warm feelings toward certain other people. And that’s very good, but for you, learning must come first. Do you understand what I’m saying?

I have absolutely no idea what this means. I get that Adam needed to learn how to speak and behave, and how to avoid killing blind guys that he’s annoyed with, but I’m not sure how reading Elizabeth Barrett Browning is going to help them make any headway towards solving the real problems that Adam’s facing, like being wanted by the police. But it’s the late 60s; maybe this is one of those self-directed curriculums.

Meanwhile, out on the lawn, there’s another freelance guidance counselor taking an interest in Adam’s future.

Nicholas Blair, Collinwood’s resident Satanic sorceror, has learned that there’s a new form of life running around that he might be able to turn to the dark side. So he goes out to the terrace, strikes his magical kung fu pose, and makes with the dialogue.

Nicholas:  Nameless, miserable spirits lying in violated graves, hear me. Listen to my command. Come to me, and help me, if I am to help you.

He does this kind of thing all the time. This is a character who understands that he’s on television, and it’s his responsibility to do interesting things.

Nicholas:  Maimed and suffering spirits robbed after death in the name of false creation, I speak as your benefactor! And I command you — make your presence known to me!

And it works! It’s fantastic. Two gore-splattered Chromakey ghosts fade into view — one with no arm, and another without a head.

This is one of those moments where I need to take a second, and remind everyone that this is afternoon television. Little by little, the Dark Shadows team has managed to shift the limits of acceptable broadcast standards so gradually that they can put a bloody, headless ghost on screen, and it doesn’t feel out of place. A week and a half ago, ABC had The Dating Game in this timeslot. Now look what they’ve done.

Anyway, these are two of the unwilling organ donors who gave Dr. Lang a hand when he was stitching his monster together. Nicholas has called them from their graves, so they can lead him to Adam.

They don’t seem very chatty, so Nicholas says, “If you cannot lead me, then point the way to me!” which is just insensitive. One of them can’t see, and the other one has some basic deficiencies in the pointing department. 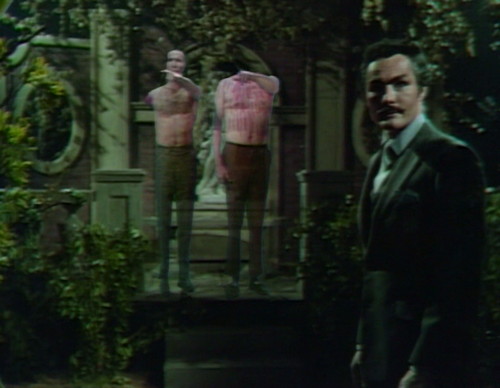 Still, they do what they can. It’s a good thing that Nicholas decided to do this ritual within the line of sight of the house. The ghosts point to Collinwood.

Nicholas asks, “What part of the house is he in?” which is awesome. What are they supposed to do, charades?

But now Nicholas knows that the monster’s somewhere in the mansion where he’s staying, which is super convenient. If Adam’s still in an amorous mood, then this story might get real interesting, real fast.

There’s a loud metallic squeak from the studio when Stokes says, “A humorless man, Mr. Blair, is an incomplete man.”

Adam and Stokes step on each other’s lines a few times in their scene together, especially just after Stokes sits down next to him.

Duane Morris is back today playing the headless ghost — we last saw him in May, when he was the stand-in for Adam’s headless body. We’ll see him again in November, playing Diabolos. 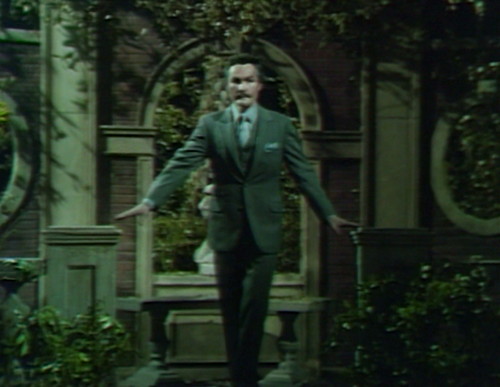