“It must be done as only another human being could do it.”

So here’s something I never thought I’d say: Ever since the Dream Curse storyline wrapped up last week, Dark Shadows has been a little dull.

That’s an extraordinary statement, because the Dream Curse storyline was a completely static piece of soapcraft that spent months walking in circles, and then fizzled away to nothing at all. You’d think that it would be impossible for a story to look sedate compared to that. And yet, here we are. 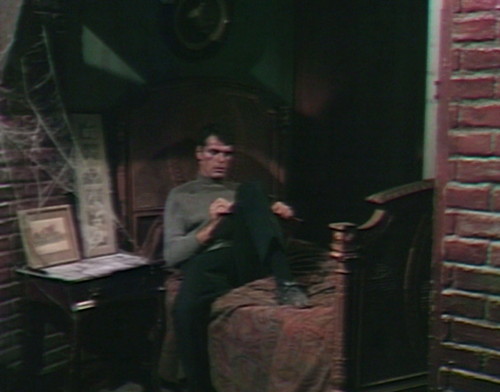 The problem is that Adam is still stuck in his dusty hideout in Collinwood’s abandoned west wing. He’s been here since late last week, and it’s started to get to me. I get that soap operas are slow sometimes, and Dark Shadows has more than its share of glacial periods, but nothing really drives that home more than having a character trapped on the same set for episode after episode.

Adam’s laying low right now on account of being a giant Frankenstein man who has recently run amuck a couple of times, and while things haven’t quite gotten to the torches-and-pitchforks stage, you can never be too careful about these things. So he’s taking some time off, and couchsurfing while he catches up on his reading. 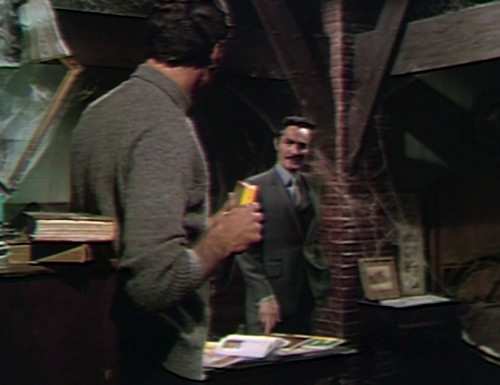 And then who should show up but Nicholas Blair, the sorcerous supervisor who arrived a little while ago to tell the local witch that he’s disappointed in her job performance. This is supposed to be a thrilling twist, but honestly, he’s the fourth character to visit Adam’s room this week. Carolyn’s been popping in and out, and he’s also had visits from Harry and Professor Stokes. So the novelty of someone stopping by for a chat has worn off to some degree.

The exciting difference here is that Nicholas apparently has some kind of satanic plan for Adam; he’s been very excited about the idea that Adam is a new life form who could be turned to the dark side.

But so far that’s kind of a theoretical plot point, and it’s hard to get too turned on by it. Nicholas has been on the show for a solid month at this point, and he hasn’t actually done anything evil yet. He’s called up spirits a couple times, but who doesn’t on this show?

The only thing that’s keeping Nicholas’ “evil” cred alive is the idea that he has some kind of dark, mysterious plan that we know almost nothing about. In fact, the only thing that we actually know about Nicholas’ plan is that this isn’t part of it.

But what the hell, here’s a new plan.

Nicholas:  You are Adam. You’re bigger than other people. You learn fast. You have a better brain. You can do things that other people can’t do. And you’re very strong! You are a very important person.

Listening to this, Adam tries to stand up straighter, which is adorable.

Nicholas:  You are a man who — with my guidance — can alter the course of history. Yes, you and I shall be going a long way together.

And that’s it, that’s the extent of Nicholas’ nefariousness for the day. This may not seem that bad to us, but Dark Shadows was produced by New York theater people, and for them, the darkest sin that you could possibly commit is to go to Los Angeles and get an agent. Nicholas is their worst nightmare. 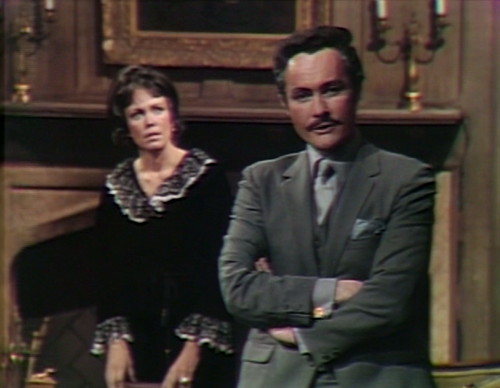 But life can’t be all smiles and handshakes, not on a Friday. Whatever Nicholas has up his sleeve, the fact is that the show’s main storyline is about a guy who hasn’t left his bedroom in over a week.

So don’t get me wrong, I love Nicholas, and I’ve talked a lot about how funny and cool he is. But we’re a month in, and we’re still not getting a lot of plot points out of him. If he just decided not to show up for work on Monday and we never saw his character again, then pretty much nothing on the show would change. He’s just been hanging around on the fringes. 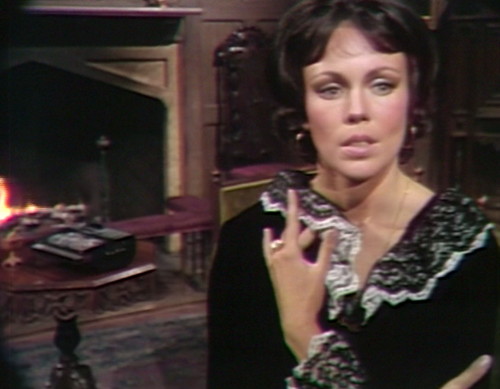 So here’s where a power hitter like Angelique really comes in handy.

Angelique knows that if Adam dies, then Barnabas will become a vampire again, and for some reason known only to crazy people, that’s the only thing she wants in the whole world.

Nicholas has been telling her to back off, because he’s got plans for Adam. You can’t say that kind of thing to Ms. Cassandra Angelique Bouchard Blair Collins Collins. She’s only going to stand in the background and smolder for so long.

This is why you need a good lunatic in your cast, for when things get slow and you need someone to get unreasonable. Angelique isn’t a perfectly-constructed character, and I’ve had cause to speak sharply to her on several recent occasions. But when things are poking along and you need a change, you can always count on Angelique to step up, and be completely out of her goddamn mind.

She marches up to Adam’s hiding place — and by the way, for a dusty old storage room in an abandoned wing of the house, this place gets a lot of foot traffic. You could set up a hot dog stand on this route, and you’d at least break even.

Adam’s door is locked, but that means nothing to Angelique. She just twiddles her fingers at the handle, and it opens for her. It’s finger magic, apparently; her hand is a sonic screwdriver. 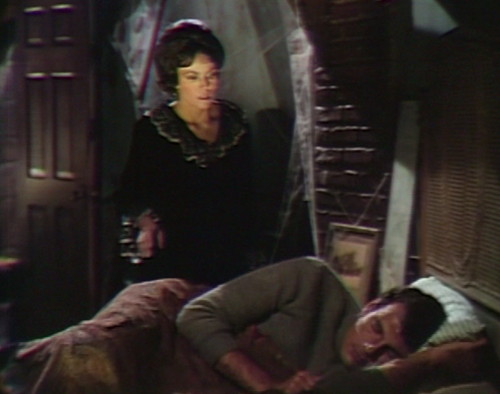 Adam’s all curled up on his bed, and Angelique takes a moment to consider what type of club is appropriate for this hole.

Angelique:  So… you are Adam! You must not die through magic. Nicholas would surely know that I was responsible. No, it must be done as only another human being could do it. 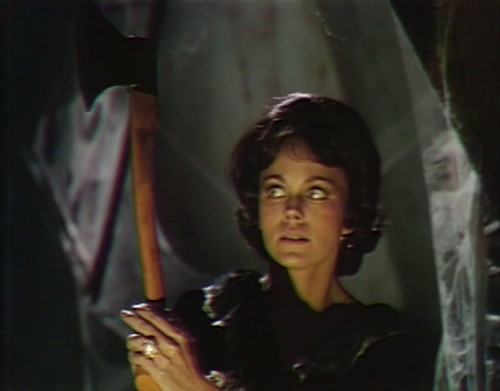 So she picks up an axe, because that’s how a human being would do it. Not a sane human being, obviously. The other kind.

When Roger enters Collinwood in the first scene, he closes the door behind him, but it swings open again.

When Nicholas is seen in Adam’s room, the intention is obviously to suggest that he appeared there by magic. There’s a tight close-up on Adam’s face to disguise Nicholas walking onto the set, so that he can be on the opposite side of the room from the door when he says his first line. Unfortunately, that close-up isn’t as tight as it needs to be, and you can see the top of Nicholas’ head over Adam’s shoulder as he passes by.

Nicholas gets his line twisted in a sparring match with Cassandra:

Cassandra:  What are you smiling at?

Nicholas:  You, and your perpetual unwillingness to learn.

Cassandra:  To learn what?

Nicholas:  That working yourself up into a rage never gets yourself anywhere with me, and it never has. 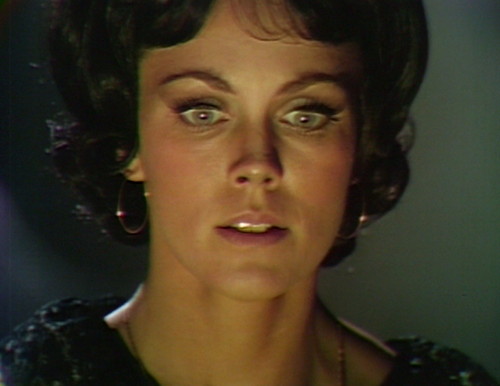