“Do you remember I told you when I was in the past that I shot someone?”

At the end of Friday’s episode, Dr. Eric Lang’s assistant brought him a package straight from the cemetery. Delighted, the doctor opened the box and said, “Oh, Jeff! Don’t be so squeamish! Come have a look at it! It’s a perfect specimen!”

Then the camera zooms in on the box to show us a detached human arm, which actually does look pretty nice, if you like guys from the elbow down.

We’re not going to reach that level of damn-the-torpedoes lunacy again until, ooh, about halfway through Tuesday, so we might as well take a moment to talk about The Munsters and The Addams Family.

The Munsters and The Addams Family are an unlikely pair of twin sitcoms that premiered within a week of each other in September, 1964. They each presented a vision of suburban American life, challenged and interrupted by a ghoulish and macabre family of monsters just down the street.

The Munsters, which aired on CBS, was about a loud, happy family who happen to be creatures of the night. The show was produced by Universal Television, so they were able to use the character designs from the Universal Monsters films — most notably Boris Karloff’s creature from Frankenstein, which inspired the look for the squared-off head of the household, Herman Munster. His wife, Lily, is a vampire, and Grampa Munster’s look is modeled on Bela Lugosi’s Dracula. Herman and Lily’s young son, Eddie, is an elementary school version of the title character in I Was a Teenage Werewolf.

The gist of The Munsters is that the family tries to fit in with their suburban neighbors, despite the obvious challenges. The stories in each episode were comparable to other mid-60s sitcoms, with episodes based around all the typical family enthusiasms and anxieties — ball games, ham radio, getting a driver’s license, office parties, camping trips, pop songs and small-time con artists.

The difference was that the family’s peculiarities — especially Herman’s — would turn any situation into a high-concept comedy of errors. Take any family sitcom trope — a school talent show, for example, where a well-meaning father promises to perform even though he doesn’t have any actual talent. The comic twist is that the father is an enormous, lumbering Frankenstein monster, complete with bolts in his neck. Panic invariably ensues.

But in the end, the family is exonerated and cleared of all charges, because they’re obviously so nice and eager-to-please. It’s essentially the story of an immigrant family, so determined to assimilate into American culture that they hardly even notice the weird looks they get on the bus.

The Addams Family is a stranger beast. The show is based on Charles Addams’ series of cartoons for The New Yorker about a wealthy and eccentric family with macabre tastes. Gomez and Morticia Addams aren’t monsters in the Frankenstein sense — they just happen to enjoy death, suffering and dangerous animals, and they assume that everyone else does too.

Most of the cast are human beings, but there are a few members of the household that appear monstrous. Their butler, Lurch, is a taciturn ghoul in the Frankenstein/White Zombie area, Cousin Itt is covered in hair from head to toe and speaks in alien gibberish, and they have what appears to be a detached human forearm called Thing, who pops out of a box to fetch the mail or hand Gomez a cigar, among other small household duties.

Unlike the Munsters, the Addams family doesn’t try to fit in with their neighbors. They simply live their exotic lives in their crumbling, cobwebbed mansion, constantly surprised that anyone finds them unnerving. They don’t leave the house much, mostly choosing to pursue their unusual hobbies in peace. They’re hospitable to guests, although the regular people who interact with them often end up mentally or emotionally damaged in some way. 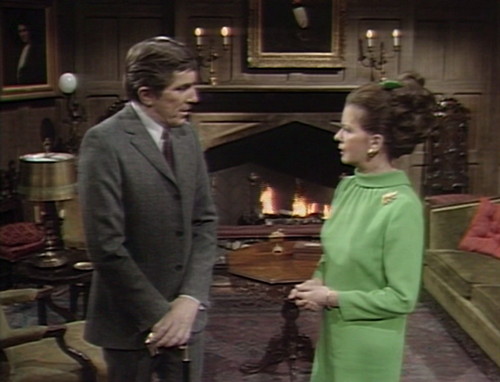 Strangely, both shows ran for two seasons and ended in spring 1966, just before Dark Shadows premiered on ABC’s daytime schedule. I don’t know if anyone made the connection between the Munsters, the Addams and the Collins families at the time — Dark Shadows was certainly gloomy, but not gleefully macabre. But over time, as DS devoted more attention to the supernatural, they started to drift over into Munster and Addams territory.

The key similarity to all three shows is that the families hardly notice that they’re out of step with the rest of the world. By this point in Dark Shadows, the inmates at Collinwood are having casual conversations about ghosts, witchcraft and time travel, which they find puzzling but not existentially challenging. They can discuss questions like Is that antique portrait casting a hypnotic spell on Roger? with only occasional, fleeting references to the possibility of a “logical explanation”.

But the seance which sent the family’s governess to 1795 means that the family is now open to all kinds of outlandish theories.

Vicki was originally introduced as the audience identification character — the fish out of water who arrived at Collinwood in episode 1, and led the audience through our introduction to this strange and haunted family. Now, Vicki is even more haunted than anyone; she’s been back in the 1960s for a couple weeks and she’s still talking about witches and time travel, with the rest of the household following suit.

So, naturally, it’s Vicki who delivers the show’s first true Addams Family moment. There’s a knock at the door, and when Vicki opens it, she lets out a piercing shriek and runs into the foyer, followed at a safe distance by their puzzled guest.

This is Harry Johnson, the son of housekeeper Mrs. Johnson, and he’s come to stay at Collinwood with his mother. But he happens to look like kidnapper and storyline speed bump Noah Gifford, who was shot in 1796 when Vicki rescued Daniel from his clutches.

Or, at least, Vicki thinks that Harry looks like Noah. Who even knows with this girl.

Liz hurries over to see what the noise is all about.

Liz:  What are you talking about? What’s impossible?

Harry introduces himself, and Vicki starts to calm down a little.

Harry:  I’m sorry if I startled you; I didn’t mean to.

Liz:  Why did you scream?

Vicki:  Mrs. Stoddard, do you remember I told you when I was in the past that I shot someone?

Vicki:  Well — this man — he looks exactly like him! And when I opened the door and saw him, I was terrified!

Okay, granted, she doesn’t calm down very much. In fact, she turns and delivers that last line directly to Harry’s face. 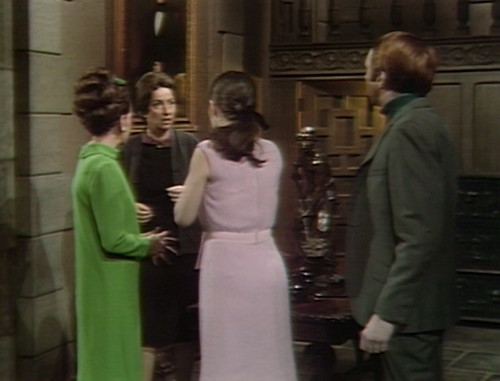 So the guy has to be wondering what kind of madhouse he’s walked into. And oddly, he seems vaguely puzzled by his welcome, but not particularly bothered by the fact that the first person he’s met is apparently confusing him with a previous murder victim.

Mrs. Johnson emerges, and Liz is extremely casual about the entire experience.

Liz:  It was just a case of mistaken identity.

Harry:  Yes, this lady thought I was someone else, and —

Liz:  Now, don’t get upset, Mrs. Johnson. I’m sure your son will be glad to explain it to you while I take Vicki upstairs.

Yeah, I’m not convinced that he’s qualified to explain anything. He’s not accustomed to having his life turned upside down like this; he only met Vicki a minute ago.

But the really weird thing about this sequence is that it doesn’t appear to be connected to anything else on the show right now. Mrs. Johnson gives Harry a dressing-down, and warns him not to cause any trouble here. Then there’s a scene at the very end of the episode, where Harry sneaks into the drawing room and starts rifling through the drawers.

And then the episode ends, and we don’t see Harry again until episode 542, three months from now. Tomorrow’s episode picks up from a Barnabas/Dr. Lang scene, and we never find out what Harry thinks he’s looking for, or why he’s even on the show.

But that appears to be where we’re going right now. The 1795 storyline started to drag a bit towards the end, but all of the plot elements were there for a reason. Everything fit together, and contributed to the story of the Collins tragedy.

Now, we’re heading into a much looser period of the show, where the storylines aren’t as focused or coherent. The producers aren’t thinking about “1968” in the way that Dark Shadows fans do — as a limited story arc, bounded on one side by the 1795 flashback and on the other side by 1897. As far as they’re concerned, we’re back to the standard soap opera never-ending story, so they just start chucking all kinds of things into the mix. After a while, you stop asking questions; you just open the door, and see what walks in.

So the Collins family becomes this wild bunch of eccentrics, accepting every loose bit of chaos that comes their way. Like The Munsters and The Addams Family, everyone who crosses their path is sucked into the madness.

There’s nothing you can do about it. It’s just one of those Things.

At the beginning of Act 1, Mrs. Johnson talks to Liz in the foyer. As Liz takes off her coat, the shadow of a camera can be seen moving across the drawing room floor. About ten seconds later, you can hear someone in the studio cough.

There’s a tape edit at the end of act 2, as Vicki walks to the front door. She leaves the drawing room, and then it cuts instantly to her screaming as she sees Harry through the door that she didn’t have time to open.

At the end of act 3, as Harry smokes, there’s another cough from the studio.

In act 4, the studio lights are reflected in Dr. Lang’s mirror as Liz examines it.

At the beginning of Barnabas’ scene with Dr. Lang, there’s a loud squeak from the studio.

Barnabas tells Lang, “Then I’m sorry, Doctor, but I cannot in effect consign my future to you, unless you’re willing to be… free, uh, to be very… open with me.”