“Strange things may happen. Ignore them.”

This week, Joshua Collins has learned that his dead son, Barnabas, has returned from the grave as a vicious undead serial killer, and he’s made a vow to do something about it. And this is how desperate Joshua has become — he’s willing to suggest a team-up with the Countess Natalie Du Prés, who he doesn’t even like that much.

But things have become pretty flexible, here in the dying days of the 1795 storyline.  They don’t have a lot of characters left, what with all the dying, so it’s hard to even get a decent bridge game going, much less a ritual of summoning.

So suddenly Natalie has the power to pray to a candle, sending out a psychic distress call to attract any passing occult-identified day-players. This is why we have a migrant witches problem.

We’ve only got a couple more weeks here in the 18th century, and then it’s back to the future. For a soap opera, this is a very unusual structure  — soaps don’t usually have a hard-stop deadline, where every current storyline has to wrap up so that we can move on to the next thing.

By this point, we’re down to three dangling story threads, and the writers are trying to find ways to make them all connect up. The three stories are: Joshua’s attempt to uncurse Barnabas, Nathan’s plot to get control of Millicent’s fortune, and — to a lesser degree, because who cares — Vicki’s impending execution for witchcraft. 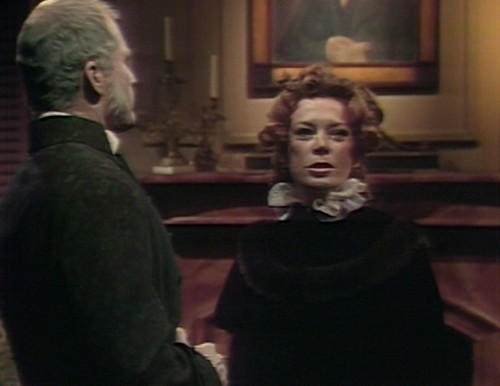 So Joshua reaches out to the Countess, because time is money, and this curse isn’t going to break itself. It actually works pretty well to give Natalie some familiarity with the occult — she’s been dabbling with tarot cards since the first day we met her, although that seemed more like an idle-rich eccentricity than any claim to power.

Like any retcon, this requires a bit of a leap in logic — if Natalie knew how to place a black-magic service call, why didn’t she do it a month ago, when she knew that Josette was in danger? But whatever.

Anyway, their planning session at the Old House is interrupted by a bit of outside interference. There’s a gust of wind over by the fireplace, where they’ve hung the portrait of random ancestor #12. The candles blow out…

And the portrait changes, becoming an image of Angelique. This may be Dark Shadows’ first completely successful Chromakey effect. They tried a similar trick a couple weeks ago, when a skull appeared in Reverend Trask’s mirror, but the edges didn’t quite match. Here, they’ve found a way to line the shots up perfectly, and they use lighting effects in the center of the image to draw attention away from the edges. They’ve finally figured this out; it’s a nice milestone in the series’ visual development.

Plus: Angelique has a portrait! It’s brand new, and a lovely surprise. This is how you know that Angelique is going to continue to be a power player on the show — they wouldn’t bother painting a picture of her if they were planning to leave her behind when they head back to the 1960s. 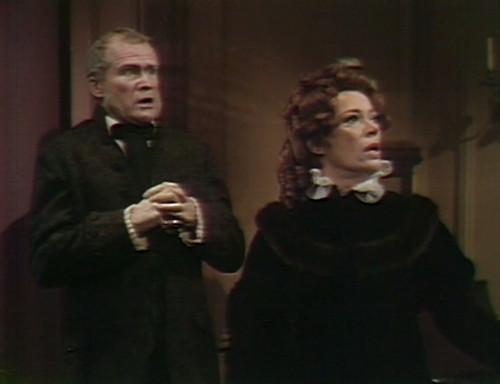 So that’s all well and good, although honestly this episode is a bit of a letdown after the amazing character-developing confrontations on Monday and Tuesday. The problem with this “removing the curse” sequence is that there aren’t any rules that the audience can understand.

Ideally, curing Barnabas should be based on some character-based choice, like for instance: Joshua has to sacrifice something that he loves in order to save Barnabas. In a pinch, they could even use some kind of occult-technobabble countdown clock, like they have to collect the following objects by midnight. 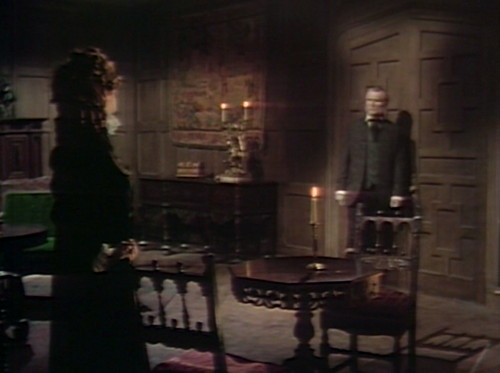 But everything about this situation is left super vague — Natalie’s going to put out some kind of psychic signal, which might bring somebody here who can help.

So Angelique’s opposition to the plan is equally shrouded in vague, which is why she only needs to show up in portrait form. She doesn’t really have anything to fight, so making the picture appear is just a signal that says: hey, I’m still part of this storyline. Text me when you figure out what the hell you’re trying to do. 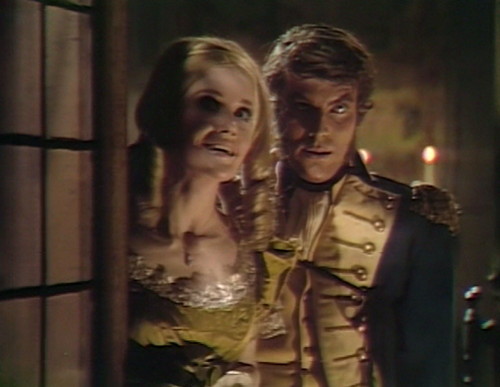 Meanwhile, in the B-plot, Nathan is working on his scheme to get Millicent’s money. He’s guessed that Barnabas is the vicious killer who’s been choking women, and that he’s hidden upstairs in the tower room. So he convinces his new bride that she needs to go up to the tower room, just to see what happens.

This is a way higher level of skullduggery than we’ve seen from Nathan before. We know that he’s a gold-digger and a skirt-chaser, but up until now, he was basically a friendly sort. He testified against Vicki at her trial, because Trask was threatening his career, but at least he pretended to feel bad about it. He’s suddenly graduated from scoundrel to psychopath in the last two days.

So Millicent walks upstairs, and straight into harm’s way. Joshua really should have thought about putting a lock on this door. There’s just a latch, and it’s on the outside of the door, which is only helpful if you built the room with the intention of locking somebody in there. What is the matter with this family? 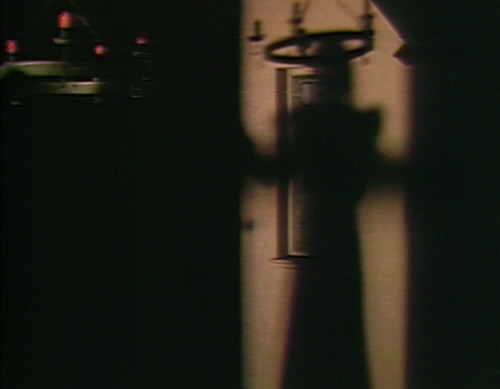 As Millicent enters the room, we get a really nice visual set piece. We see her shadow, as she looks around… 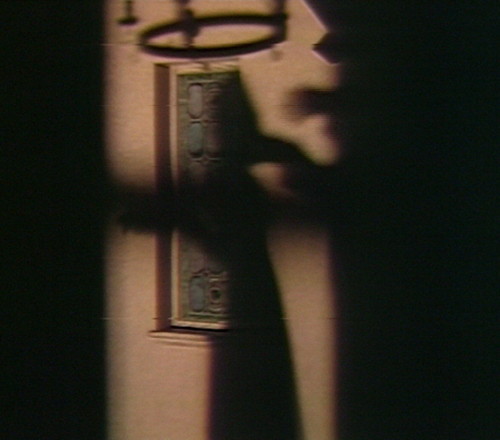 And then hands reaching out to grab her, in the grand bonkers Universal Monsters tradition…

And he’s upon her, and she screams. It’s beautiful.

When we come back from the commercial break, there’s another of Barnabas’ “I have no choice but to do something terrible to you” discussions, followed by the inevitable vampire attack. Jonathan Frid has gotten really good at this, giving us a nice long look at the fangs as he dives in.

Check it out, he really goes nuts.

There you have it. A true professional. 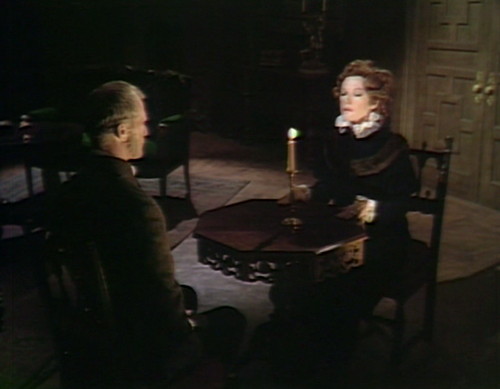 Meanwhile, Natalie and Joshua have set up in the drawing room with a candle and a dream. It’s a funny use of magic, basically the same thing as making a wish. They’re sending a prayer out into the universe, and hoping for an express delivery from FedEx-Machina. 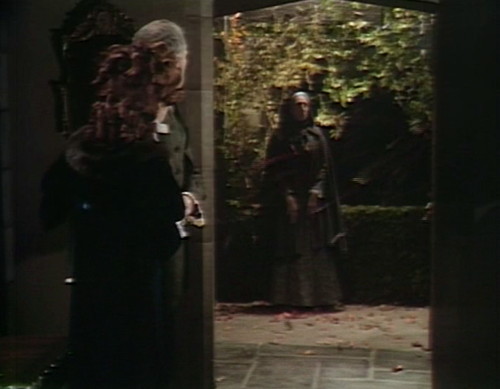 And then — more spectacle! Look at how many visual set pieces they’re doing today. They used to space these out a lot more; I don’t know if we’ve ever had so many different visual surprises in an episode.

But here we’ve got the typical door-slamming-open trick, plus wind and lightning and blowing leaves. I’m kind of amazed they’ve held off on the smoke machine today; they would have been well within their rights to blow a little mist around. 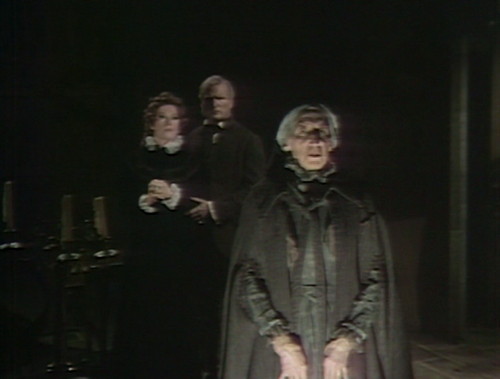 But look what happens when you broadcast psychic messages. You never quite know who’s going to turn up; you just roll the dice and hope that you get something good. In this case, they get Bathia Mapes, and life will never be the same again.

There’s a lot of candles-blowing-out scenes today, and they’re still trying to perfect that technology. In the Old House, just before Angelique’s portrait appears, the light dims after the candles go out. In the drawing room before Natalie’s ritual, they overcompensate in the other direction, dimming the lights before she blows out the last candle.

It’s also not clear what happens to the candle that Millicent brings into the tower room. She’s holding a candle when she unlatches the door, but the next shot is the shadows sequence, and the only light source is behind her.

At the end of act 2, when Millicent and Nathan are talking at the drawing room window, there’s the sound of knocking just before the last line.

34 thoughts on “Episode 449: Something Nasty in the Woodshed”