“I don’t care about those things that I can’t understand.”

Okay, everybody, please take your seats; Barnabas Collins is looking up.

“Why doesn’t she come to the window?” he says, in thinks. “I must see her one more time before she leaves. One more time!”

Barnabas is trying to avoid Josette, but as usual, he isn’t trying very hard. He knows that if he sees her, he won’t be able to resist biting her and turning her into his vampire bride, and on the whole that’s probably not something that a gentleman ought to do. But if he could just see her One more time!

He’s not good with the portion control, is what I’m saying. It’s not his strong area.

But it’s Friday, and even at this late date, Dark Shadows hasn’t completely gotten its head around Fridays.

This is a perennial problem for serialized narratives, in any medium — what to do while you’re waiting for the cliffhanger. Strong episode endings are a relatively recent development on Dark Shadows; it wasn’t that long ago that they would just run the credits after twenty-two minutes, and whatever happened to be going on at that moment was the end of the episode. Sometimes that was just Vicki staring off into space.

By now, they’ve realized through trial and error that it’s better to actually have something happen at the end of an episode, just to give people a sense of accomplishment, and on Friday, they need to come up with something special.

Unfortunately, sometimes the Friday cliffhanger is so obvious, and telegraphed so far in advance, that it feels like a chore just waiting around for it to happen. In this case, we’re a little less than twenty-two minutes away from Barnabas biting Josette. That’s not a spoiler, because they’ve been talking about it nonstop for days.

So when they open the episode with Barnabas looking up at Josette’s window, and Josette at the window being looked up at, it’s not difficult to glance at a calendar and connect the dots.

Fortunately, we’ve got an entertaining B-story already in progress — and as it happens, it’s another predatory love story. Millicent Collins is naive, sheltered, silly and jaw-droppingly wealthy, and she’s currently being swept off her feet by the handsome young sweeper Lieutenant Nathan Forbes, who’s desperately, head-over-heels in love with her finances.

Under ordinary circumstances, Millicent’s relations would have put the kibosh on this budding romance long ago; it’s easy to imagine her flint-hearted cousin Joshua chasing Forbes out of the house with any blunt instrument he could lay his hands on.

But it’s been a tough couple months for the Collins family, and they’ve had a lot on their minds. The survivors, I mean. 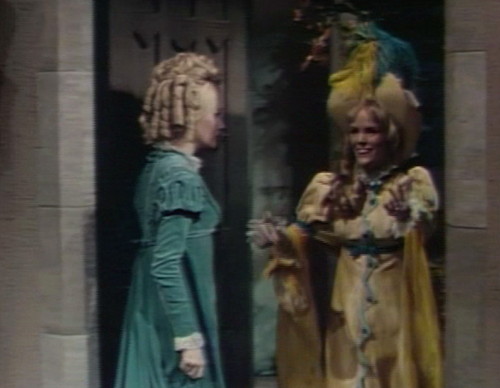 So things are going remarkably smoothly for Nathan, and he’s eager to set a wedding date and get this locked down before anyone notices. Then there’s a knock at the door and a hat walks in, and under it is Suki Forbes.

That’s Mrs. Suki Forbes, by the way, as in: Nathan’s wife.

Suki showed up for the first time in yesterday’s episode, where she tracked Nathan down at the tavern and started making his life miserable, but I was addressing other issues yesterday and didn’t get a chance to mention her.

She’s phenomenal, a brand-new soap vixen who turns the B-story on its head just by walking into the room. She’s Nathan’s “abandoned” wife, who he left in Baltimore with a not-very-trustworthy promise to send her money every month. There’s a suggestion that she had an affair with at least one other sailor, but that doesn’t seem to be the root of the marital difficulties. The real problem is that they actually know each other, which in his line of work can be terribly dangerous.

Suki is pure soap opera dynamite, straight from the moment she walks in the door. This is yesterday’s scene, but it’s so good that I have to quote from it.

Nathan:  My expenses here have been greater than I anticipated.

Suki:  That means there’s a woman.

Nathan:  No, there’s no woman.

Suki:  With you, Nathan, there is always a woman. Who is the poor soul?

Suki:  Nathan, if you weren’t feathering a nest with some local innocent, you wouldn’t be quite so anxious to get rid of me so quickly. So, who is she?

Nathan:  What difference does it make? You couldn’t possibly know her. It’s not a serous thing anyway.

Suki:  I expect she thinks it is.

Nathan:  Suki… how much do you want, to get out of Collinsport on the next carriage?

He grabs her roughly, by the wrist.

Nathan:  Are you going to give me your price, or do I have to —

He stops himself. It’s a great character moment; this is the first time we’ve seen Nathan losing his cool. 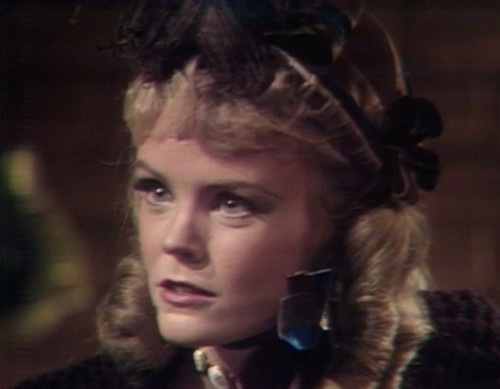 She yanks her wrist out of his grip, and narrows her eyes.

Suki:  Do you have to what, Nathan? You’re hardly in a position to do anything, you know. I mean, you are legally married to me. I even brought our marriage certificate along to prove it. Somehow, I anticipated your being obstinate.

That’s another revealing character detail. This is a girl who thinks several steps ahead. Nathan is in trouble. 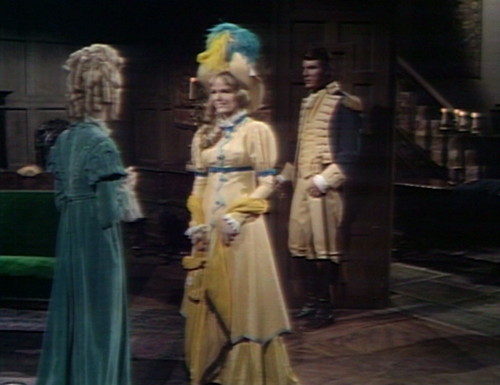 So that’s the girl who just walked into Collinwood. Millicent is horrified, obviously, and doesn’t understand what’s going on. But Suki came prepared.

Suki:  Yes. You don’t mean Nathan has never told you?

Millicent:  Told me what?

Suki:  Well, that he had a sister.

Millicent relaxes, and Suki goes on, clearly having the time of her life.

And there she is, our terrifying new character. She’s hardly been on the show for a day, and already she’s primed to be an instant fan favorite.

Suki has every quality that an audience responds to — she’s clever, she’s funny and she immediately opens up more conflict and story possibilties, just by standing there. Plus, she’s got the kind of remorseless, self-possessed swagger that gay dudes in particular are especially susceptible to. 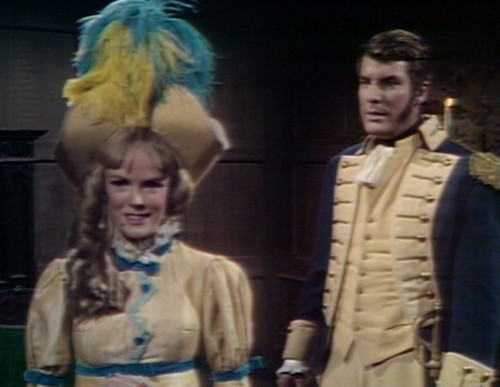 She’s also the most authentically contemporary character that we have in the 1795 storyline. Suki is right at home in late 1960s soap opera. Her frank talk about infidelity and ruthless interest in non-consensual alimony is exactly what the genre is just learning how to do.

Thinking about cultural influences, I’m not sure where Suki comes from. She’s probably an amalgam of various vixen characters who popped up starting in the mid-60s, on soap operas and elsewhere. The one touchpoint that I can think of is Edward Albee’s 1962 play Who’s Afraid of Virginia Woolf?, just for the cynical pleasure they’re taking from breaking through the respectable barriers of marital duty and fidelity. 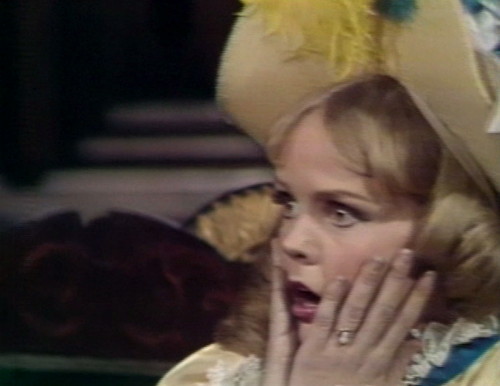 Then, just as Suki is saying something particularly arch and wonderful, she suddenly gasps, and stares at the window.

And there’s our weird hero, Barnabas the Vampire Stalker, with his nose practically pressed up against the glass, which really makes you wonder about his commitment to keeping his supernaturally-assisted existence a secret.

I mean, what the hell is he even trying to do here? I know this is a weird thing to say about a character who asked his friend to kill him the other day, but sometimes I think Barnabas is being willfully self-destructive. 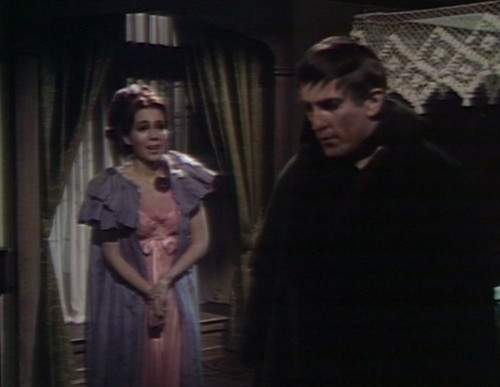 So if the A-story is just going to pout outside the window, we might as well invite it in and see what it wants.

Barnabas’ awesome “I must see Josette one more time” plan ends up exactly the way we figured it would; the inexorable logic of the Friday cliffhanger has caught up with them at last.

So Barnabas grabs Josette, and this time he’s remembered to put his fangs in, which is always a plus. Come back on Monday for the next episode; I have the feeling that everything is going to work out just fine for all of these people. Why wouldn’t it?

Jane Draper, the actress who plays Suki, is a bit mysterious. According to her IMDb listing, Dark Shadows is her only screen credit. Her page on the Internet Broadway Database lists one show that she was in — a 1966 production of Those That Play the Clowns, which also happened to include Grayson Hall (Julia/Natalie) and Thayer David (Stokes).

There’s nothing else on the internet about her, and she’s not mentioned in any of the Dark Shadows books that I have about her, other than a note that she played Suki. This is frustrating, because she’s great, and I’d love to know more of her story. If anybody knows anything about her, please leave a comment!

Update: In August 2020, we did get a comment, from Ms. Draper herself:

“I am the Jane Draper who played Suki on Dark Shadows! Thought I’d be on it longer but got killed off by Barnabas. I worked on Broadway, film and this soap opera. Now, I play Bluegrass, always my passion, on guitar and upright bass. Born in Illinois, grew up mostly in Southern Indiana and moved to NYC in my teens. thank you for your kind words.”