“I will not let you do what you would have to do to be with me.”

We’re in the Collins family mausoleum again today, for literally the sixth day in a row. It’s been nine months since we opened the mystery box and unleashed the vampire on the world of Dark Shadows, and we’ve now reached the stage where the show is almost entirely graveyard-based. I remember the days when people on this show had homes to go to.

Josette’s tracked down her ex-boyfriend Barnabas, who died recently and doesn’t seem to be committed to making their relationship work anymore.

“I beg you,” he says. “If you love me, then go. Forget you saw me. Remember this only as a terrible dream.”

I think we’ve all had conversations like that, haven’t we, where the other person just won’t accept that it’s over? Somebody needs to buy Josette a copy of He’s Just Not That Into Biting You. 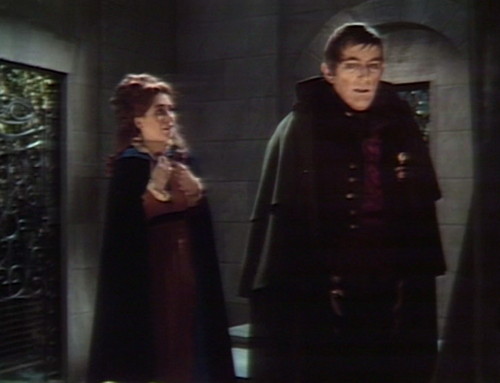 This whole week is basically a push-pull dance between these two endangered lovebirds. This is the default setting for soap opera storytelling: two people made for each other, but kept apart by some dreadful secret or star-crossed circumstance.

She’s pregnant with someone else’s baby, or he’s being blackmailed, or she’s the district attorney and he’s on trial for murder, or he thinks that she’s in love with his identical twin, or who even knows what.

According to the narrative rules of the soap opera format, the fact that he’s a member of the living dead who lives in a crypt is just a detail. She wants to be with him, and he’s trying to let her go, and it’s killing him, again.

The really remarkable thing about the Dark Shadows version of this story is that in a normal soap opera, this could go on for years. There are couples on daytime that have been doing exactly this dance for decades. These two have all the way until the end of next week.

So here’s a little comedy sketch featuring the lovestruck couple.

Josette:  Barnabas, what has happened to you?

Barnabas:  I can’t tell you that.

Barnabas:  Oh, Josette, please, just go. Before it is too late.

Josette:  Too late? Too late for what?

Josette:  But what about us?

Good question. We might need to back up a step, and give this some more consideration. 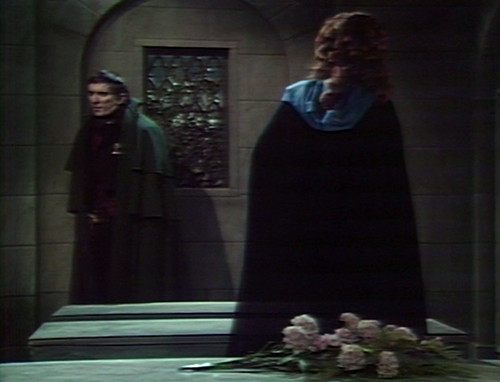 The weird thing is that Josette seems perfectly okay with the concept that Barnabas has come back from the dead. She’s not even curious about it.

Josette:  Barnabas, you told me you would come back to me. You told me to wait for you!

Barnabas:  If I’d known then what it would be like after I came back, I would never have asked you to wait.

I seriously don’t understand what she thinks is going on here. You can hear her losing IQ points every time she opens her mouth.

Josette:  But you did ask, and I did wait! Believing that this would be the beginning of a new life for us!

Barnabas:  Josette, don’t talk that way! You don’t know what that new way of life would be like.

Josette:  I don’t care! All I know is that I love you, and I would do anything to be with you!

As always, Barnabas expresses his feelings by way of the mysterious language of Fridspeak.

Barnabas:  I will not let you do what you would have to do to be with me.

And she still doesn’t get it.

Josette:  What do you mean?

Barnabas:  Josette… you will understand this.

If it kills me, he adds, but only in my imagination.

Barnabas:  You were at my bedside when I died. And here I stand before you now, alive. How do you think that happened?

Josette:  I don’t care how that happened! All I know is that you’re back, and we must be together!

Oh, man. She really is Twilighting. This is not acceptable.

You may have heard about this obscure vampire romance series called The Twilight Saga, which tells the dramatic story of the worst girl in the world, as she calmly and systematically ruins her own life, and the lives of everyone around her.

The heroine, Bella Swan, is The Worst Character in Fiction. She’s the ultimate Mary Sue character, a dull and depressing stand-in for the author, who has no redeeming qualities but is universally adored by everyone around her.

The most despicable thing about Twilight is that the entire plot of the four-book series is concerned with the following question: Should a 17-year-old girl give up her life and her future — literally committing suicide — in order to please an adult man who dates high-school girls?

The answer to that question, obviously, is that you should call the police before starting the next chapter. At one point in the second book, she actually asks the adult man’s family to vote on whether he should kill her or not. I forget how it all turns out.

And unfortunately, Josette is getting dangerously close to that Twilight area. She has no job, no friends, no hobbies, no aspirations — no ties to anything that could give her a sense of purpose outside of her relationship with a guy who died two weeks ago.

Recently, she said to Vicki, “Life is meaningless now, I have no hope!”

So why do we care what happens to her? 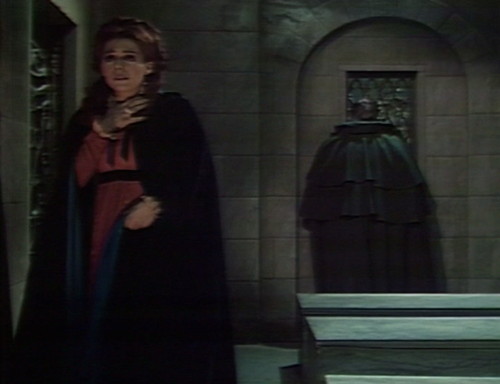 The scene ends the only way that it can possibly end, with the two of them striking the most tragic poses they can think of, and fading out for the commercial break.

On a normal soap opera, this would be our sad, creepy Bella Swan story, and they’d spend years running this presumptive heroine’s character into the ground, grinding the audience’s sympathy and respect into powder.

But Dark Shadows isn’t a normal soap opera, and it’s definitely not Twilight, thank goodness. We get to drop-kick this girl into the sea next week, and not a moment too soon.

Suki closes the door behind her as she enters the Eagle, but the door doesn’t shut.

At the end of Act 3, Suki tries to stifle a cough as the scene fades out.

The bartender at the Eagle, Mr. Mooney, is played by Bob O’Connell, who also plays the Blue Whale bartender in the present-day storyline. Usually, O’Connell is a non-speaking extra, but in this episode, he has a brief scene with Nathan, and he’s listed in the credits. Mr. Mooney returns in a month.