“I am defending the right of this girl to be judged innocent until she is proved innocent!”

In the Salem witch trials in 1692, the case for the prosecution mostly relied on what they called “spectral evidence”, which means basically that they believed whatever the screaming girls said. Other techniques included the “touch test” — i.e., having the witch touch a screaming girl, to see if she stops screaming — and looking for a “witch’s teat”, which is just as grim as it sounds.

But you know what they didn’t do in Salem, or in any other witch trial in history? They didn’t tie the accused witch to a tree and leave her there overnight, expecting that the tree would be dead by morning.

They didn’t use this technique for two reasons. For one thing, it’s pretty unlikely that the tree would hold up its end of the bargain. The other reason is that it’s a completely bonkers thing to do, even by the generally loose standards of witch trial sanity.

I’m bringing this up because Dark Shadows is a daytime soap opera, and so obviously a discussion of the Puritan justice system is going to come up at some point. 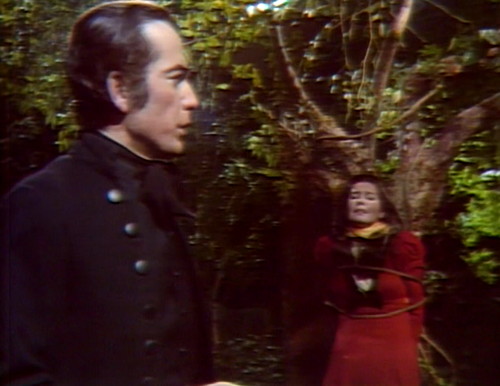 Today’s episode begins with a reprise of Friday’s cliffhanger, just as witch hunter Reverend Trask gets over-excited and starts tying governesses to the landscape.

A reprise of the previous episode’s cliffhanger isn’t actually the standard way to open an episode during this period of the show, but they absolutely have to repeat Trask tying Vicki to a tree and doing an exorcism, because otherwise the audience would assume that they’d dreamed the whole thing. 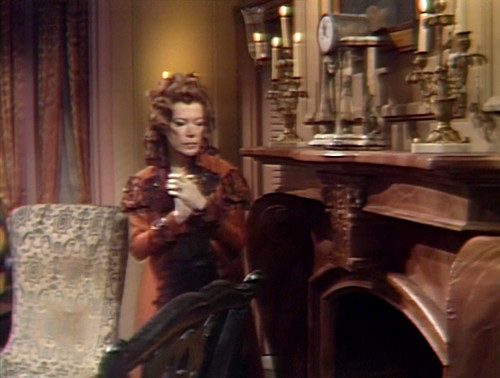 Now, it was partly Natalie’s idea to call a witch hunter in the first place, to investigate all of the unexplainable malarkey surrounding Barnabas and Josette’s aborted wedding plans. But now that Trask’s here, she’s experiencing buyer’s remorse.

On Friday, she was uncomfortable with how physical Trask got with Vicki — pushing her around, gagging her, smacking her in the face, and finally bundling her out of the house to points unknown. I’m not sure what Natalie expected; a witch hunt tends to be a full-contact sport.

But this is good character-building for the Countess. Abigail is supposed to be the real religious fanatic in the cast, so it makes sense for Natalie to take a more moderate position, just to make sure everybody has something to do.

Still, after that first delirious reprise, the show slows down quite a bit. Natalie paces around the room, says good night to Angelique, and then fusses with her tarot cards until it’s time for a real scene to start. There are a lot of weird pauses like this today. At one point before a commercial break, the whole show comes to a stop while we watch the clock strike twelve.

But you tend to get pacing issues in an episode like this, where they have a great idea for the cliffhanger, but it’s going to be twenty-two minutes until we get there, and they only have sixteen minutes worth of plot.

So Natalie kills a little time by filling in Barnabas and Nathan about the evening’s entertainment. 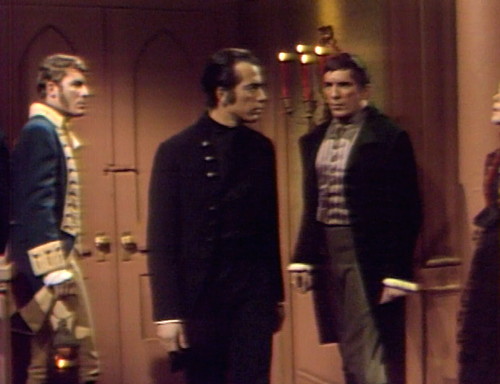 Then the door opens and Reverend Trask walks in, and the threat level instantly escalates from Guarded to Severe. This tends to happen when Trask is around; he enters a scene like a panther that’s trying to quit smoking.

I suspect it may be impossible to make a boring scene that has Trask in it. I mean, I’m sure they’ll try, but that’s my current hypothesis. 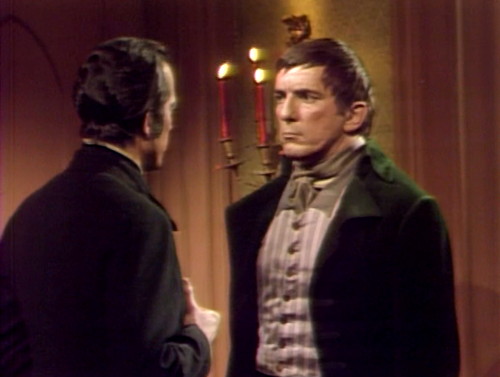 Worried about Vicki, Barnabas tries to step up to Trask. In general, this is not a winning strategy.

Barnabas:  Now, what have you done with her?

Trask:  I must caution you, Mr. Collins, not to interfere with God’s fight with the Devil.

Barnabas:  God’s fight with the Devil, indeed. Don’t you realize you’ve committed an injustice? This girl is not a witch!

Here’s the move that puts Trask squarely in the heavyweight class.

Trask:  I find your concern for the defense of this girl most curious, Mr. Collins.

Trask:  You don’t know where she came from. You know nothing of her background. She arrived here, in fact, as a total stranger. You must have some reason for defending her so strenuously.

Barnabas:  Reverend Trask, in your zealous pursuit of non-existent witches, it perhaps has escaped your memory that we have just fought a war recently — a war to establish certain rights.

And then he loses it, right at the five-yard line.

Barnabas:  And I am defending the right of this girl to be judged innocent until she is proved innocent!

Oh, well. It was worth a shot, anyway. 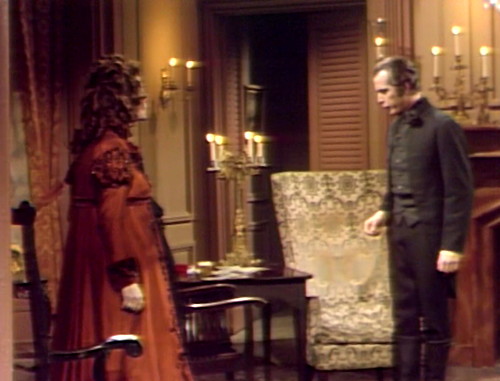 Barnabas and Nathan leave the house to search for Vicki. At a loose end, Trask prowls around the room, looking for something else to pounce on.

Trask:  Are these your tarot cards, Countess?

Trask:   I was under the impression that you are a religious woman.

Natalie:  I am. I rely on the cards to tell me what the future will be.

Trask:  Then you can lay no claim to being religious. God, and only God, determines what the future holds for each of us. It cannot be done with tarot cards, or any other of the Devil’s playthings.

Natalie rolls her eyes. “With all due respect,” she sighs, as she settles into a chair, “I am capable of pursuing my religion my own way, without any advice from you.”

And that is the end of that conversation. Poise, ladies and gentlemen. That’s how it works. 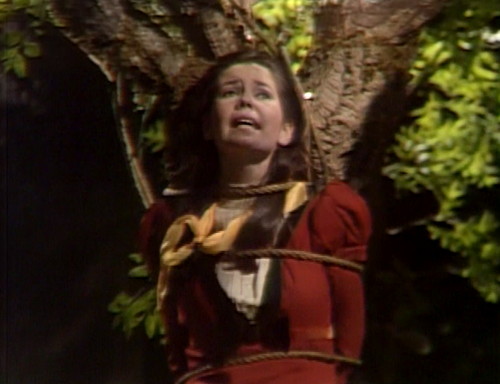 Meanwhile, Vicki’s still tied to the tree, sobbing and calling for help. The tree wobbles amusingly, as she tries to stay terribly still and not knock it over. This requires the smallest possible unit of struggling in the history of peril.

Barnabas and Nathan show up and release her — which in this case is more like Vicki just stops holding the rope around her body — and Barnabas says he’ll take her back to the house.

On the verge of panic, Vicki insists that she can’t go back to the house, if Trask is going to be there. It looks like she’s finally starting to take this uncertain and frightening journey into the past seriously.

Once they clear the set, Angelique emerges from the underbrush. She was following Barnabas and Nathan, and she knows about Trask’s test. 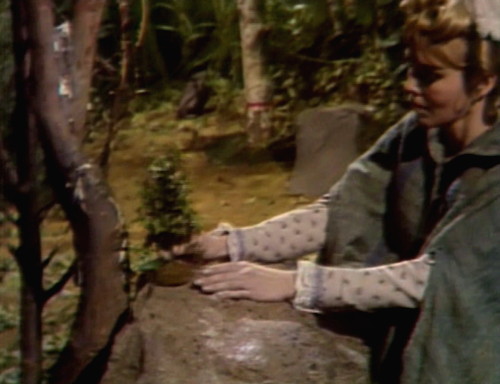 Reaching around the back of the tree, she breaks off a branch, which somehow becomes a little bonsai voodoo doll sapling. She sets it on a nearby boulder.

Grabbing a lit match from essentially nowhere, she sets fire to the branch, which goes up nicely. 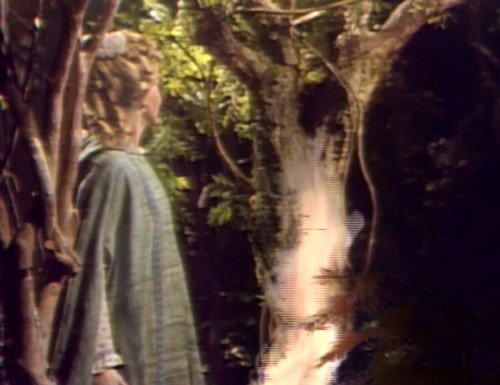 And then the world lights up, in technicolor Chromakey. This was actually a fairly cutting-edge special effects technology in 1967, and I’m sincerely impressed with what they’ve managed to do with it so far.

Anybody else would have ended this scene by just showing a close-up of Angelique’s face, while they used crackling sounds and some lights on her face to suggest flames. Actually, I take that back — nobody else would ever think of ending a scene like this in the first place. The purpose of Dark Shadows is to make things happen on your television screen that you’d never expect, and this scene delivers.

Vicki:  The sun is coming up. Reverend Trask will be on his way to the tree by now.

Nathan:  I’d like to see the look on his face when he discovers you’re not there.

Vicki:  I wouldn’t. I don’t ever want to see his face again, as long as I live.

Okay, Vicki, damn. Dial it back slightly. You stood next to a tree for like an hour.

As dawn approaches, Natalie follows Trask out into the woods, and challenges him to prove that his test was worthwhile.

They approach the spot where Vicki was tied up, and Trask is triumphant. 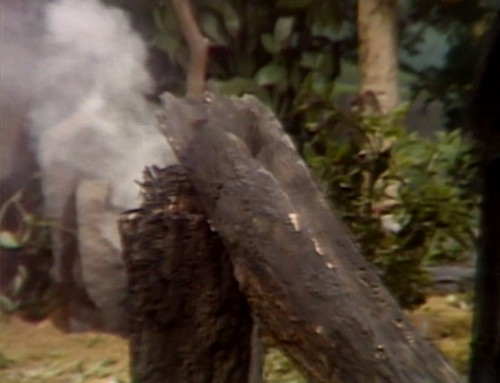 “She was tied to that tree, Countess,” he says. “Last night, it was a vital, living thing. Now, look what has happened!”

And, oh, it’s gorgeous. Just look at that. The moral of the story is that witch hunters are always right. You might want to check and see if you’ve got a receipt for those tarot cards.

I mentioned it above, but that “innocent until proved innocent” line is one of my favorite dialogue flubs. Pure Frid magic.

Besides the wobbly tree, the forest also features a rotating bush. When Angelique hears Barnabas and Nathan approaching, she ducks behind a tree. Her cloak brushes against a bush, which spins around.

When Angelique sets the little branch down on the boulder, she should have turned it so that the firelighter attachment was hidden from the camera, rather than just leaving it right out there in view.

Towards the end of the Collinwood scene, Barnabas tells Vicki, “Now, you are not to worry about him anymore.” In the studio, someone coughs. You can also hear a cough in the next scene, after Natalie says, “Of course that is all.”

Natalie bobbles a line in her scene with Trask in the woods:

Natalie:  Are you afraid that perhaps the test has failed, and I will go back and tell everyone that you have been a fool?

Natalie:  Then what — why are you afraid of anything?