“The tarot cards give us access to knowledge of the occult which cannot be transmitted either orally or in writing.”

On Friday, a vengeful Angelique cast a spell on Josette and Jeremiah, sending them like sleepwalkers to a forbidden tryst, outside in the moonlight. Josette was followed by her aunt, the Countess Natalie, who was an eyewitness as the spellbound couple embraced, and pledged their love.

Now it’s the next morning, and Natalie does the only sensible thing she can do — she brings Josette’s father, Andre, out to the spot where the lovers met, and tells him that they’re being menaced by an evil force.

That doesn’t necessarily sound like the logical next move, but soap operas are approximately 90% information management. If somebody does something, then the next day, everybody has to stand around and talk about it. And if it’s a secret, then there’s all kinds of extra information management activity, including eavesdropping, speculating and making up excuses. Frankly, we’re lucky anything ever happens at all.

The real story of today’s episode is that Lara Parker needs a break every once in a while. Angelique just joined the show a week and a half ago, and she’s absolutely dominating the storyline. She’s been in seven straight episodes, wreaking a different flavor of havoc every day — kissing her boss’ fiancee, strangling a toy soldier, spiking the drinks, and generally manipulating everyone in sight.

But you can’t keep that up forever without a break, so Angelique gets an episode off, and the show shifts into neutral for a day.

So Natalie and Andre engage in a typical information management session, using a classic two-handed Mulder-Scully formation. Natalie insists that Josette and Jeremiah were in a trance; Andre is skeptical and doesn’t want to hear her occult gibberish.

The added value of this scene is that David Ford has decided, as usual, that he’s only going to memorize half of his lines, and he’ll fill in the other half with whatever occurs to him at the time.

Natalie:  Andre, I don’t think she knew what she was doing last night.

Andre:  Nonsense! It was obviously a conscious act on her part. You think she knew that this man was going to be here, waiting for her?

Andre:  Well, then, she knew very well what she was doing, then, didn’t he?

I don’t know why he ends that line with “didn’t he?” I don’t think he knows either. It’s just one of the many poor acting choices that David Ford makes every day, beginning with agreeing to be on a television show in the first place.

He moves upstage and stares off into the distance, in the direction of the teleprompter. It doesn’t help.

Natalie:  She was behaving very strangely all evening.

That line just straight-up doesn’t make any sense; it’s possible that he’s reading from tomorrow’s script. Natalie starts looking off into the distance as well. They might as well just turn the camera toward the teleprompter, and let us read the lines ourselves.

Natalie:  It was as if she’d been placed in a trance of some sort.

Andre:  Oh, now… don’t start that mumbo-jumbo of yours!

Natalie:  There is no other explanation that makes any sense!

Andre:  Well, that one doesn’t make any sense either.

Which pretty much brings us back to starting positions. Andre decides that he’ll talk to Jeremiah, and make sure that the thing that he’s not convinced actually happened doesn’t happen again.

It turns out Jeremiah doesn’t really understand what happened either, and he was there at the time.

Andre:  Give me an explanation.

Jeremiah:  There is no explanation. I don’t know why it happened… it just did.

Jeremiah:  I know that’s hard to believe, but it’s true. I went out for a walk, and before I knew it, I was standing in the garden, waiting for Josette to come to me.

Andre:  Did you know she would?

Jeremiah:  Yes, but… I don’t know how I knew it. That’s the strange part about it; it just happened.

They’re bumping up against the limits of the current information management system, because Angelique is really the only character who knows what’s going on. So there’s nothing to do but go through another iteration of “that doesn’t make any sense.”

Fortunately, Dark Shadows has access to some extra information sources that normal soaps don’t, and here’s one of them: tarot cards.

In Natalie’s first episode a week and a half ago, she did a tarot reading for Barnabas, and discovered that “a wicked woman” is trying to bring them all grief.

Natalie shows the cards to Naomi, who’s never seen them before. As Natalie lays out the cards, she explains, “They’re very fascinating, and informative. The tarot cards give us access to knowledge of the occult, which cannot be transmitted either orally or in writing.”

As far as I can tell, that line doesn’t make a bit of sense, but there’s nothing we can do about it; we just have to sit here and take it.

Naomi is trying to keep up.

Naomi:  Does every card have a different meaning?

Natalie:  No… but the meaning of each card is directly in relation to the card that it’s near.

At this point, Naomi stops asking questions, because obviously it’s not going to get her anywhere.

Natalie studies the cards for a moment, and then gasps, her hands flying up to her face. She seriously needs to stop playing with these cards if they’re going to upset her this much.

Once again, we’ve got the lovers — obviously Barnabas and Josette, and their upcoming wedding — but it’s inverted, which is a sign of separation. On the left, the Lovers are next to the Death card, and on the right, there’s the Chariot, which brings the revelation of a betrayal.

I’m not sure why the Chariot means a betrayal, but they’re Natalie’s cards. Maybe she got the bonus expansion pack.

The interesting thing, for our purposes, is that we’ve had two tarot card readings so far, and they’ve both been exactly correct. Nobody accuses Natalie of being a witch, but clearly something supernatural is going on.

We know that Natalie’s interpretation is correct, because we know about Angelique’s plans — but we would have known that the cards were right anyway, because that’s the only reason why you’d have tarot cards on the show in the first place. They don’t need to spell that out; it’s triggered automatically by the audience’s innate sense of narrative.

We don’t think of Natalie as a witch, because the same thing would happen if any random character started flipping over cards. Soap operas are all about information management, and the tarot cards are another information source. They’re a plot accelerator, and they have a direct line to the writers’ room, so we trust them.

The last sequence takes that concept a step further. Naomi is asleep, and she’s dreaming about the mysterious tarot cards, with a voiceover narration from Natalie. At first, it’s just a repeat of lines from the previous scene — the Lovers are inverted, the Death card indicates the end of a relationship, and so on.

But then it takes a surprising turn. Natalie urges Naomi to get up out of bed, which she does. “Follow the chariot, Mrs. Collins,” Natalie says. “Follow it, and see who will be betrayed.”

This is going to be another one of those random prophetic dreams, like the dream that David had when he learned about Barnabas sleeping in a coffin in the basement. But this time, the dream isn’t sent by a ghost or a vampire. As far as we can tell, she’s being haunted by the power of the cards. 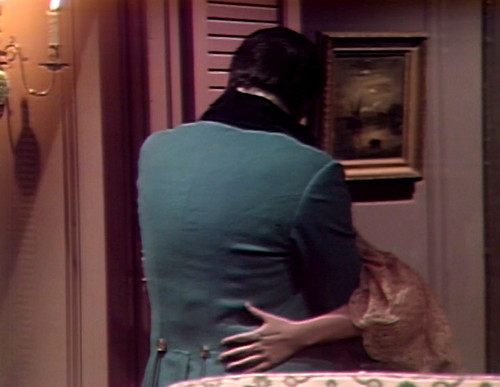 The woman is Josette, obviously, but we don’t see her face, because Kathryn Leigh Scott isn’t working today either. There’s a stand-in for Josette — it’s actually Dorrie Kavanaugh, who was last seen as Phyllis Wick after the seance at Collinwood. She doesn’t sound like Josette at all, but I guess we’re supposed to assume that the real Josette is off starring in her own dream at the moment, and this was the best they could do at short notice.

At this point, things start to get a little weird.

Naomi sees a pitchfork brand on the woman’s hand. Natalie’s voiceover explains: “The symbol of the devil. The woman is possessed by the devil. She will bring grief and destruction into this house.”

Naomi tries to confront Jeremiah, but he tells her to go back to her room. Desperate to find out who the mysterious woman is, Naomi grabs the woman’s arm…

… And the arm comes off, leaving Naomi holding the bloody stump.

That may qualify as the goofiest Spectacle cliffhanger they’ve done so far. They’ll top it eventually, but this is a new benchmark for crazy.

Naomi Collins, ladies and gentlemen. Let’s give her a hand.

When Natalie and Andre are talking outside, the camera tilts too much and you see the top of the set, and a studio light. It happens just as Andre is saying, “Nonsense! It was obviously a conscious act on her part.” This is also the moment when Andre and Natalie start to drift off book.

In the drawing room, when Naomi asks Jeremiah, “You’re disturbed, aren’t you?” — there’s a clatter offstage which sounds like a stool being scraped on the floor. After that, you can hear footsteps, and something is dropped on the floor.

We get another look at the top of the set and the studio lights in the Andre/Jeremiah scene, when Andre says, “Never mind. You professed your love to each other.”

As Naomi comes downstairs in the final scene, you can see a stagehand crouching behind the embracing couple, ready to do the severed-arm gag. He’s clearly visible on screen for more than ten seconds; check out the picture below.

This is Dorrie Kavanaugh’s last appearance on the show. She appeared in six episodes, mostly as a stand-in for Maggie in dream sequences, starting in May 1967.

The set where Josette and Jeremiah had their tryst is referred to as “the gazebo” on Dark Shadows websites, although that doesn’t really look like a gazebo. Does anyone know where that name came from? Is it ever mentioned on the show? 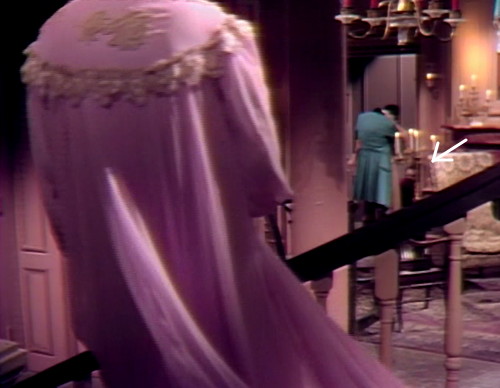