When you get down to it, magic is just metaphor. It’s taking a symbol — like a toy soldier — and saying, this toy soldier represents Barnabas. Then you wrap a handkerchief around the soldier’s neck, pull it tight, and see what happens.

Anybody can do that, really, minus the magic part. Your boyfriend is far away, but every night you kiss a picture of him before you go to bed. You get an email from an annoying co-worker, and you roll your eyes and snarl at it, the way you’d like to treat the person if you could get away with it. When someone that you love dies, you light a candle, and leave flowers on the grave — and even if you don’t believe in ghosts or heaven, it comforts you.

But the people who know magic can take that a step further. Angelique isn’t just smacking a toy soldier around. She tricks the universe into believing that the soldier is Barnabas, and when she throttles the toy, Barnabas chokes.

That’s what magic is — you connect the symbol to the real thing that the symbol represents. Then you wish so hard that you punch a hole through reality, grab something on the other side, and pull.

When you take a step back and peel the metaphor away, Angelique is just conducting a standard-issue soap vixen disinformation campaign. She has a romantic rival, and she’s trying to make it look like her rival is being unfaithful. This is straight out of the diva / bitch / mythopoetic-trickster-figure playbook, as practiced by Erica Kane, Amanda Woodward, Alexis Colby and probably half the people on Pretty Little Liars.

You could easily do this storyline without giving the trickster-vixen magic powers. There’s probably been at least one soap character running this exact con, somewhere on daytime TV, every single week since day one. Giving the character make-believe demonic voodoo powers just means that the story happens faster.

Let’s look at it for a minute as if we were doing this story the slow way.

Barnabas goes on a business trip to a sugar plantation on a Caribbean island, and he falls in love, more or less, with the sweet little rich-girl princess he meets there. Their union is blessed on all sides. They’re both amiable, and sheltered. They’re both wealthy, and both families see an advantage in the alliance. And frankly, neither one of them is going to be a finalist for a MacArthur genius grant, if you know what I mean.

So here they are, on the verge of an arranged marriage that everyone is pretending they’ve arranged themselves.

But he’s having a hard time keeping his lips off her maid. There’s no suggestion that Angelique has bewitched him with anything more occult than the usual. She gets close to him, and he starts making out with her. No sorcery required.

So would it really be that much of a surprise, if Josette found herself attracted to her fiancee’s tall, dark and handsome uncle? We saw yesterday that Jeremiah in a stern mood could catch Josette off guard, provoking a strong emotional response.

She’s clearly been sheltered by an over-protective family; it’s possible that she’s not used to having a man speak to her that way. If you squint hard enough, Jeremiah could be Mr. Darcy, or Rhett Butler on an off day. 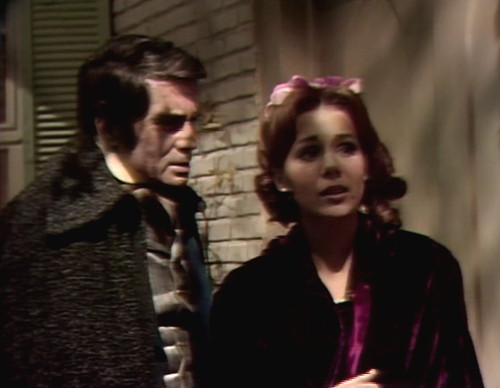 So Josette got drunk last night, on a combination of spiked rose water perfume and a spider web dress, and now she can’t explain what happened.

Jeremiah:  Barnabas loves you very much. Don’t you care for him at all?

Jeremiah:  Then why did you come to my room?

Josette:  I don’t know! I can’t understand it. I love Barnabas!

Jeremiah:  Then you must be true to him!

Josette:  I am true to him. I always will be. Barnabas is the only man I love.

Jeremiah:  You have no explanation for last night? You must have! You don’t care for me. It makes no sense to me!

Josette:  You think it does to me?

Well, it sounds to me like you kids never went to college. Didn’t they have spring break on Martinique?

Now Josette feels guilty, and confused, and probably still a little hung over. She skips lunch, and she’s avoiding Barnabas. Her aunt, the Countess Natalie, thinks that she understands why.

Natalie:  Are you becoming frightened?

Natalie:  You tell me.

Josette:  I don’t know what you mean.

Natalie:  Of marrying, perhaps? Of Barnabas?

Natalie:  Of this life? I would be terrified, all brides are.

Josette:  No. If I could marry Barnabas tonight, I would be so happy!

Natalie smiles when she hears this, and relaxes, as if the thing that Josette just said didn’t sound like a confession. Maybe Natalie’s not quite as cosmopolitan and world-weary as she pretends to be.

Natalie gets closer to the truth in a later scene, when she’s teasing Jeremiah and Barnabas.

Or maybe not, thanks to the diva-vixen-trickster that you’ve brought with you from the Caribbean. She has a talent for heating things up. 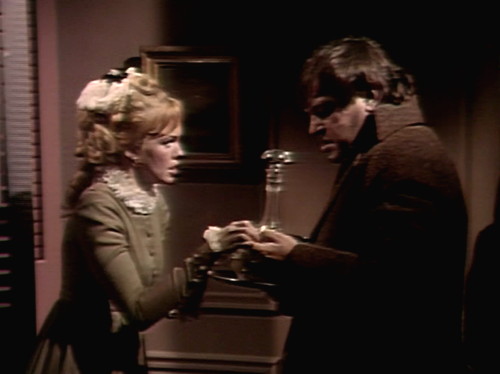 And so, here we are — one roofie, straight from the witch’s cauldron, slipped into Jeremiah’s drink. I’d start looking into the return policy for those wedding gifts; this is going to get ugly.

By this point, Josette, Natalie and Angelique have basically given up pretending that they’re supposed to have French accents.

Barnabas loses his place when he’s talking to Jeremiah:

Barnabas:  I think she’s a little jealous of you.

Jeremiah:  How do you mean?

Barnabas:  Of your influence over me. She knows that… but she doesn’t understand what a, what a friend you’ve been to me.

When Jeremiah stops Josette from going up the stairs, someone in the studio has a coughing fit. Also, the bannister wobbles.

When Jeremiah is talking to Josette on the porch, he messes up a line and just says it all over again:

Jeremiah:  It makes no sense to me!

Josette:  Do you think it does to me?

When Natalie pauses on the stairs to talk to Barnabas, she leans on the bannister, and it noticeably wobbles.

Natalie flubs a line when she tells Barnabas she’s going to play cards:

Natalie:  Now you must not be gallant, and sit up with me. I don’t think — I don’t like being with men when they wish they were elsewhere.

When Josette joins Jeremiah on the terrace, the camera has to duck down out of the way of some leaves on a low-hanging branch. This means the shot is angled slightly upwards, and you can see the top of the set over Jeremiah’s shoulder.

Natalie spies on Josette and Jeremiah’s clandestine meeting, poking her head through a gap in the shrubbery. But there’s a leaf hanging right in front of Natalie’s face, and she has to swipe it out of the way in order to register surprise.