“I don’t know who she was. But your love was wrong, terribly wrong.”

You know, people talk about breaking new ground in the arts, but then you go and make an episode of afternoon television that ends with a woman holding the bloody stump of another woman’s demon-possessed arm, and all of a sudden everyone gets all weird about it.

They say, Where’s the romance? because apparently people think that soap operas should be about characters falling in love with each other. Personally, I don’t see what the big deal is. If you’ve got voodoo dolls, time travel, tarot cards and marionette bats, then who has time for all that sappy girl stuff?

But fine, whatever. Today — just for you — Dark Shadows is all about the love.

Last night, Naomi had a nightmare that her brother-in-law Jeremiah was making out with a woman who had the devil’s mark on her hand. The sequence ended with Naomi clutching the woman’s bloody arm-stump, and that’s not the kind of dream you can shake off easily.

Naomi:  There was something terribly evil in the dream. I was trying to stop you from doing something; I don’t know what. Can you tell me what?

This is one of those conversations that people only have on Dark Shadows, where you have to explain to grown-ups that you’re not responsible for what you do in other people’s dreams.

But let me direct your attention to Jeremiah’s outfit, which is a striking innovation in the field of what the hell is on your jacket. Those are embroidered leaves, stitched in arbitrary places. I think some fashion designer took the idea of a “fall line” too literally. 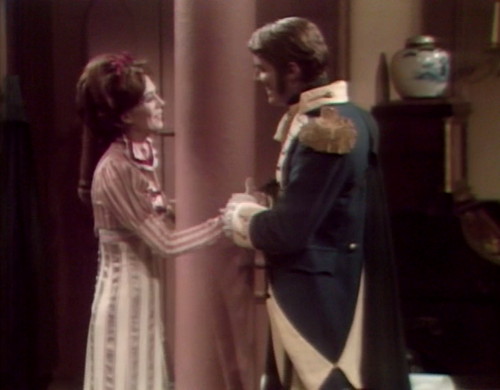 Downstairs, the romance is just heating up, courtesy of the handsome and charming Lt. Nathan Forbes.

Nathan kisses Josette’s hand, sighing. “Oh, how I envy Barnabas,” he says. “If we weren’t friends, I’d steal you away.”

“Come, sir, you flatter me too much,” Josette smiles. “Have you met Miss Collins?”

He hasn’t, yet. Somebody’s life is about to get more interesting.

Cousin Millicent, who’s come to Collinsport for Barnabas and Josette’s wedding, is a nervous, giddy flake. Nathan turns on the charm, just for the practice.

Nathan:  Where have you been hiding, Miss Collins?

Millicent:  Why, in New York, of course.

Millicent:  Now, don’t you criticize my home. I shall take it personally if you do. I, for one, would find it far more distasteful to be on the sea. But then, I am susceptible to all of those maladies which may be caused by constant motion. 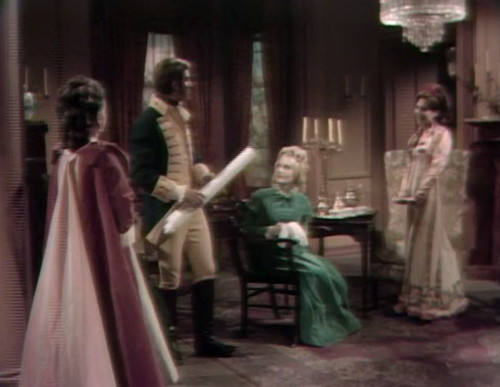 Nathan says, “A pity, Miss Collins,” because what are you supposed to say. So it’s kind of a relief when Naomi interrupts, sparing him from one of the world’s more tedious conversations.

Nathan’s actually here to go over some specifications with Jeremiah, so he excuses himself and goes upstairs.

Then there’s a sequence where all the girls have tea, because today’s episode is for the ladies. As Naomi is handed a cup, she notices that there’s a pitchfork brand on Josette’s hand.

Josette is disturbed by this, and I can’t say that I blame her; it’s not every day that the Devil gives you an involuntary temporary tattoo. This is apparently part of the spell that a jealous Angelique is casting to destroy Josette’s relationship with Barnabas, but it’s a new symptom that we haven’t heard of before.

As of just a couple days ago, Angelique wouldn’t dream of pulling a new stunt like this without telling Ben (and the audience) all about her plan, in detail. But then there was Naomi’s dream yesterday, which may or may not have been a vision sent by Angelique, and now there’s this pitchfork mark.

This is actually the most amazing thing about this whole 1795 flashback — it’s opened up so many new story possibilities that they don’t have time to explain them all. It wasn’t that long ago that I spent entire blog posts complaining about the vast amounts of recap in each episode. Now they’re springing new plot points on us in the last five seconds of a dream sequence.

Josette goes upstairs to her room to try to wash the mark off her hand. Angelique pretends to be sympathetic, saying that she found a strange crescent brand on her hand when they arrived here. She says that rubbing the mark with Josette’s rose water made it go away, and suggests they try it.

That does remove the mark, but Angelique’s put a potion in the rose water, which brings on the fugue state that makes Josette think that she’s in love with her fiancee’s uncle.

Still, I suppose this diabolical brand is better than a teardrop tattoo, or an anchor, or some Chinese characters that don’t actually mean what the guy at the tattoo parlor said they mean.

So let’s get back to Nathan, who’s brought Jeremiah some plans. I’m not totally clear on what Nathan does for a living. He’s got a naval uniform, and everyone calls him Lieutenant, but he appears to be working on ship-building plans with Joshua and Jeremiah, who are squarely private enterprise.

Of course, Nathan’s true goal in life is finding a woman with money, and Jeremiah clues him in on a new target.

Nathan:  How is Miss Winters this morning?

Jeremiah:  Working, I imagine, in the nursery. Tell me, would you take Miss Millicent Collins as a substitute?

Nathan:  She gets seasick.

Jeremiah:  She can afford to. 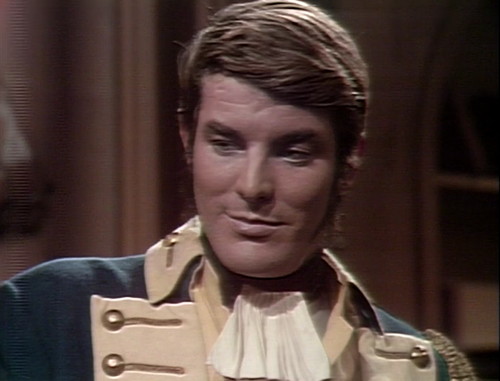 There we go, now we’ve got his attention. Jeremiah says that Millicent owns a lot of real estate in New York, and with her mother and father both dead, she’s a very rich young woman.

Moments later, Nathan has raced back downstairs; there’s no way he’s going to let this girl out of his sight. He takes her arm, and walks her from the foyer to the drawing room. Millicent giggles constantly.

Millicent:  You admit it? I’ve never heard a man be honest before.

Nathan:  Well, what men have you been talking to?

Millicent:  My lawyer — well, he’s honest about my trusts, of course.

Nathan:  Yeah, and who else?

Millicent:  My broker — he’s completely dependable about my monies.

Nathan:  He should be.

Millicent:  And my banker, of course. But they never talk about themselves. 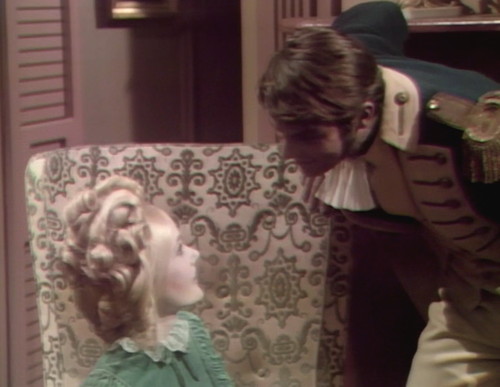 Millicent: Why should they be?

Nathan:  I don’t know, but they must be.

He leans over her, and closes the deal.

Nathan:  Because you made me honest.

So here’s where you can see the other literary influence that Nathan embodies. This episode’s writer, Sam Hall, loves creating these narrative collisions — introducing characters from other stories, and creating a huge, interconnected mash-up of story ideas.

A couple weeks ago, I wrote about the influence Tom Jones  — both the 1794 novel, and the 1963 film adaptation — had on inspiring Nathan’s roguish charm.

But there’s another story thrown into the mix as well, which explains the naval uniform — Nathan is Mr. Wickham, from Jane Austen’s 1813 novel Pride and Prejudice. Wickham is a Lieutenant in the militia who’s sold his birthright and then frittered away the money, and he blames Mr. Darcy for his troubles.

Wickham spends the beginning of the book trying to charm Elizabeth, and then he elopes with Lydia, the youngest and silliest sister of the Bennet family. Mr. Darcy needs to hunt Wickham down, and shame him into marrying the innocent young girl that he’s ruined.

So that’s where Millicent comes from; she’s a hypochondriac Lydia, and she likes a man in uniform. Nathan conducts a whirlwind of flattery, which leaves her breathless. If he hadn’t been interrupted by Jeremiah, he might actually have stood a chance of getting her to say “I do” before she even knew what was going on.

We’ll come back to this Pride and Prejudice theme again before this storyline is over; there’s more to come.

Meanwhile, Josette and Jeremiah are spellbound again. They’re trying to resist the mysterious programming that draws them together, but to be honest, they don’t try very hard. Jeremiah sticks his face on her, and starts making weird kissing motions. 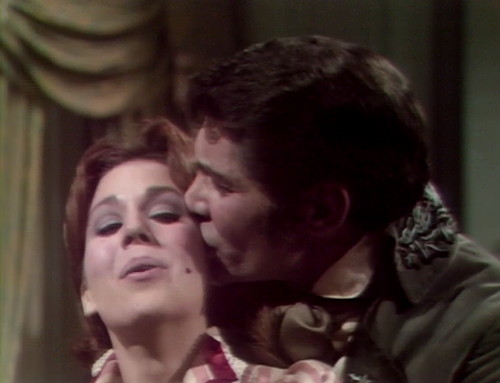 She’s supposed to be magnetically drawn to him, but the weird side-kissing is throwing her off. The whole sequence is actually pretty upsetting to watch. It’s a real watershed moment in awkward affection.

When he stops kissing her, he just rests his big monkey lips on her cheekbone. She’s kind of twisting away from him, and there’s a good chance that she’ll end up losing her balance and toppling over before they finish the scene.

It’s like Anthony George never kissed a woman before, and given what I’ve heard about him, it’s possible that he never did.

So this is really all I can do for the rest of this blog entry, just post screenshots of this weird display of affection, because it’s fascinating and horrible and I can’t look away from it. 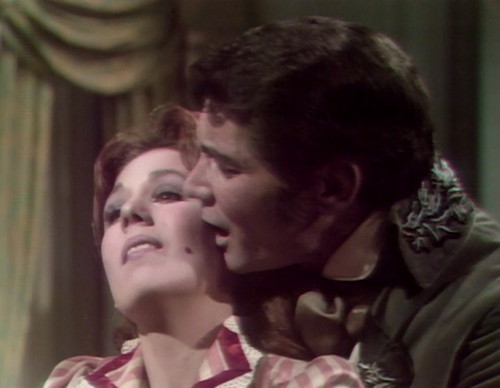 Gah, stop it! Just stop doing that, it’s really upsetting. Maybe focusing on romance wasn’t such a great idea after all. Come back tomorrow, Angelique’s going to come back with a brand new magic spell that takes us further into Crazytown than we’ve ever been before.

When Naomi tells Jeremiah that he was in her dream, he laughs: “Naomi, your dream’s not some party I had a part about — attending.”

Naomi gets irritated by Jeremiah’s levity:

Naomi:  You won’t take me seriously, will you?

Naomi tells Jeremiah that the brand she saw on Josette’s hand is in the same place as it was in the dream. Actually, the girl in the dream had the mark on her left hand, and it’s on Josette’s right hand.

When Angelique pours rose water on a sponge to wash Josette’s hand, the bottle clanks against a large water jug sitting on the table.

Millicent asks Jeremiah to get some cough syrup for her from the apothecary. Cough medicine was actually invented in 1827, when scientists first isolated codeine and morphine.

This one’s actually fixing a blooper. Last week, we saw Josette’s portrait hanging in her room, but in the story, it hasn’t been painted yet. Today, they’ve replaced it with another portrait. Josette’s portrait will arrive in episode 406.