“You, and one handkerchief, are all I need to make him regret what he’s done to me.”

Vicki has traveled in time — she’s trapped in 1795, and so are we, for the foreseeable future. We’re here to learn the secret history of how Barnabas became a vampire, and how he lost Josette, the woman that he loved.

In the last episode, we met Angelique, a beautiful young maid who works for Josette’s family. She had a love affair with Barnabas in Martinique, before he knew that the wealthy Josette returned his affections. Josette is traveling to Collinsport for her wedding to Barnabas… but Angelique isn’t done with him yet. 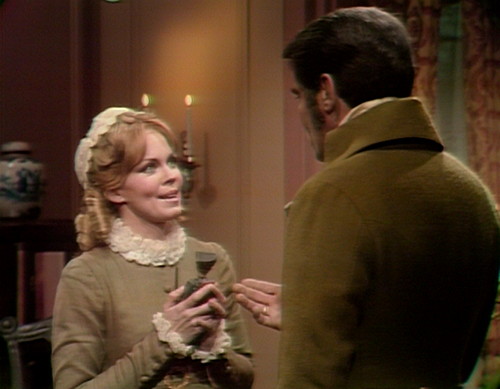 At the top of the episode, Angelique has found a toy soldier. We’ve actually seen this toy before; 172 years from now, Sarah’s ghost gives it to David as a protective charm.

Angelique asks Jeremiah about the toy, and he tells her it’s “a member of the regiment,” the set of toy soldiers that Barnabas played with as a boy. Angelique is delighted to hear this, and says that she’d like to look at it for a while before she returns it to the playroom.

Because this is a soap opera, and we know that Angelique and Barnabas were romantically involved, we know what’s going to happen — she’s going to keep this toy, as a weird little obsessed-lover fetish object, and at some point, someone will see her carrying it, and realize that she’s in love with Barnabas. Once you know how soap operas work, you can see a plot point like that coming from a mile away.

When Jeremiah leaves the room, Angelique smiles at the toy, and clues us in on her plan.

Angelique (thinks):  So, it did belong to Barnabas. Good; it’s just what I need. And no one will ever know that such a harmless-looking little plaything will cause Barnabas more pain and suffering than he has ever known.

And… oh. Okay. I guess she’s going in a different direction with this. 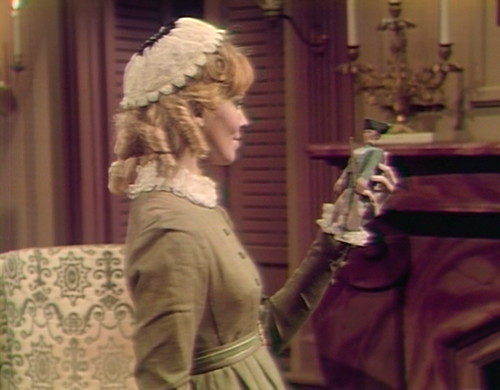 This episode is pretty much the moment when the show falls in love with Angelique. It’s the day that she casts a spell on the toy, and on us.

There are really only four characters on the Dark Shadows all-star team. These are the characters that reinvent the show on arrival — and once they enter the story, they’re never allowed to leave. There’s Barnabas, obviously, who popped out of his mystery box seven months ago and stole the show. There’s Julia Hoffman, who hypnotized the audience five months ago and basically warped the entire storyline to focus on her, and there’s Quentin Collins, who we’ll meet in 1969. And then there’s Angelique.

Soap operas are a competitive environment; the characters are always fighting to attract the audience’s attention. It’s a natural selection process, and given enough time, the strongest characters win. They get the most air time and central positions in the most important storylines, and if they leave the show, fans clamor for their return.

Angelique is perfectly adapted to the soap opera environment, and we’re about to see why. 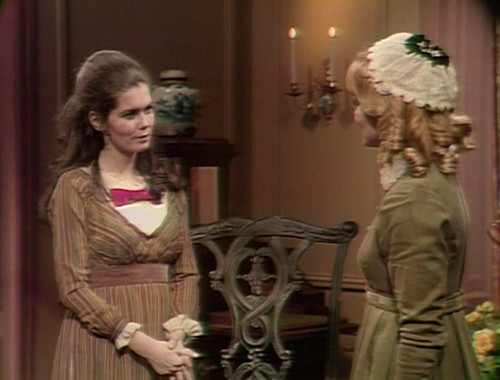 Angelique tucks the soldier away in her pocket as Vicki enters the room, and introduces herself.

Vicki:  Yes, you arrived here last night, with Miss du Prés’ aunt. I expect you won’t have very much to do until Miss du Prés gets here, will you?

Angelique:  Oh… I manage to keep myself busy. 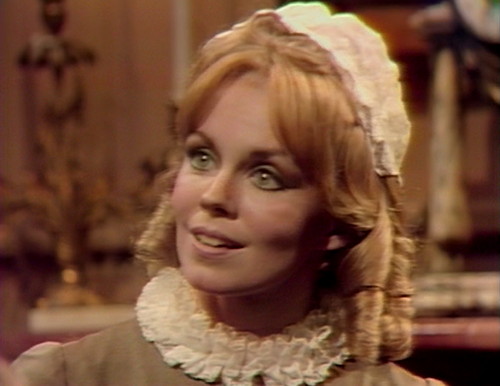 Vicki:  Do you know, I think we have several things in common. We’re both servants in this house, and we’re both in a place that’s foreign to us.

Angelique:  You’re not an American?

Angelique:  Then why do you say this place is foreign to you?

Vicki:  It would be much too difficult to make you understand.

Angelique:  Some of the things I understand… might surprise you.

And that’s basically it; now we love her. She’s a smart character, and she has secrets, and we’re suckers for that.

Smart characters move the plot along. A stupid character can go in circles for months, but a smart character sees through other people’s deceptions, and they make decisions that advance the story.

Vicki’s trying to be bold and friendly here, and she doesn’t mean to sound as patronizing as she comes across. But Angelique knows more than Vicki would ever suspect, and at the moment, that’s a secret that she only shares with us.

Oh, and she’s crazy. Absolutely out of her mind. When she gets to her room, she starts talking to the toy soldier.

Angelique:  You have an important duty to perform, little soldier. Shall I tell you what it is? No. I’ll let you be as surprised as everyone else.

She takes a handkerchief out of a drawer.

Angelique:  Do you know what this is? It’s a handkerchief, and it belongs to Barnabas.

The soldier doesn’t say anything, but she’s definitely got his attention.

Angelique:  You, and one handkerchief, are all I need to make him regret what he’s done to me.

Which is just bonkers. Nobody else talks like this. 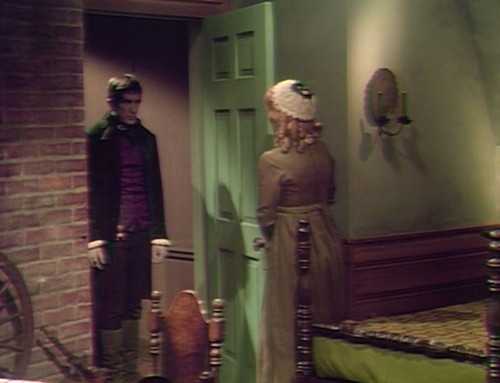 And then Barnabas Collins makes another in a long series of life-altering mistakes. He comes to Angelique’s room, to apologize for what happened in his room last night. It doesn’t go that well.

Barnabas:  I see no reason why we can’t be good friends.

Barnabas:  Anything else would be quite out of the question. You can see that, can’t you?

Angelique:  I can only see one thing, Barnabas.

Barnabas:  And what is that?

Barnabas:  You don’t understand now, any more than you did last night.

Angelique:  Oh, yes. I do understand. Our destiny was sealed those nights in Martinique. You haven’t forgotten those nights, have you?

Barnabas:  I will never forget them.

Angelique:  Nor will I. What me meant to each other those nights… that is the only reality. 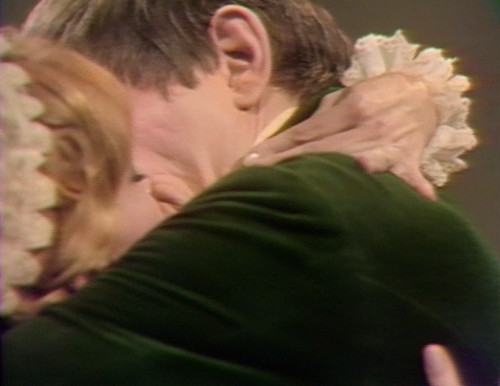 And then it goes into this area. 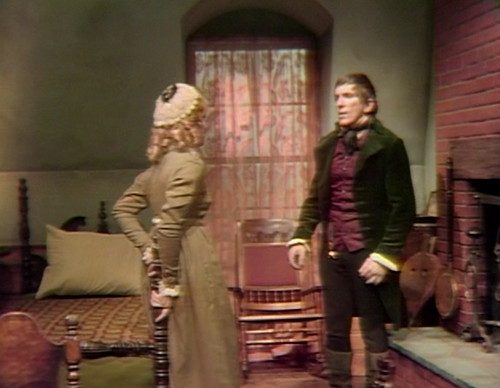 Now, this really is pretty much the same scene that they had in the last episode. She wants to pick things up from where they were in Martinique; he has a hard time saying no. But even when he acknowledges her charms, and the time that they spent together — he has to resist her. He’s going to marry Josette.

It’s totally worthwhile to do the scene twice. Angelique’s fury is going to be the engine driving the next several weeks of the story, and it’s important for the audience to understand that Barnabas is not an innocent victim in this situation.

This is his fault. He used her. He was a wealthy American visiting Martinique to do business with the du Prés family, and he was attracted to two women — the daughter of the house, and her lady’s maid. But you only propose marriage to the rich girl.

Those nights in Martinique — the intimacy they shared, the promises he made — that’s Dark Shadows’ original sin. When she told him that she loved him, she meant it, with all her heart. Now all she has a handkerchief, and a toy soldier, and the white-hot rage of a thousand suns. 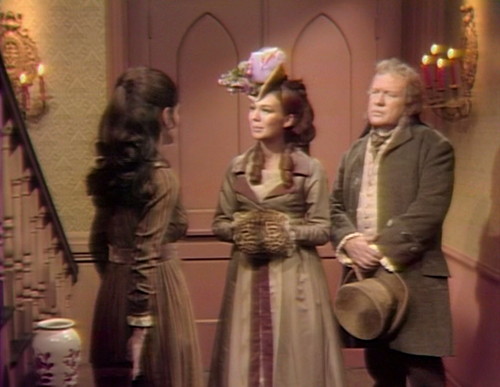 After all that, the long-awaited arrival of the bride hardly feels like a big deal at all. At the start of the week, you would have expected that this was the big moment — after months of Josette-related melodrama, she finally walks in the door. This is what we thought we were waiting for.

But after a day and a half of Angelique? Josette is just another girl in a stupid hat.

She hardly even speaks. She says “oui,” and “oh, Papa, please be patient,” and then she just stands there smiling. She’s very charming, because she’s Maggie and we love Maggie, but it’s hard to believe that this is the enchanting creature who inspired Barnabas’ crazy obsession.

Josette and Barnabas finally get a moment alone, but it doesn’t have the same spark.

Barnabas:  It seems like three years since we’ve seen each other.

Josette:  It’s been only three months.

Barnabas:  I know, but I was afraid I might never see you again.

Josette:  Did you think I’d forgotten you in that short time?

Barnabas:  No. But your ship was so late arriving, I began to think something had happened to you at sea.

Josette:  Well, it was a very unpleasant voyage, but it’s all over now.

You see what I mean? Weather reports. There’s no way this could match the forbidden passion of those nights in Martinique. 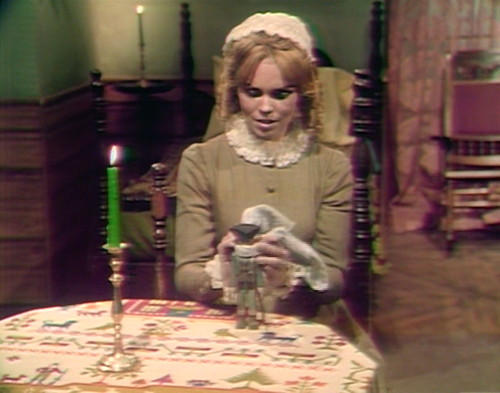 So, yeah, let’s go to Angelique’s room and throttle the living daylights out of a toy. She ties the handkerchief around the toy’s throat, and then she pulls it tight — and in the drawing room, Barnabas suddenly clutches his throat, and falls to the floor.

And that, children, is why you should never leave your toys scattered around the house. I’m pretty sure that’s the lesson.

At the beginning of the episode, when Jeremiah walks downstairs, the camera tilts up too far, and you can see one of the studio lights. This is especially noticeable because we’re not supposed to have electric lights in 1795.

Jeremiah trips over his tongue when he tells Andre, “Mr. du Prés, I’ll be happy to show you to your room now.”

When Barnabas and Josette are just about to kiss, something in the studio falls over with a crash.