We open the new week with a reprise of David’s dream from Friday’s episode. I’m not usually a big fan of repeating a dream sequence, but in this case it’s entirely justified.

For one thing, this dream delivers some long-overdue plot development — David finally realizes that his friend Sarah is a ghost, and his cousin Barnabas is a vampire. Plus, Friday’s episode was a black-and-white kinescope copy, and today we get to see the dream in full color. Well, in two colors anyway, namely: yellow and purple.

Isn’t it fantastic? I had no idea. When we saw this in black-and-white yesterday, it looked like a moody, German Expressionist art-house auteur piece. In color, it looks like exactly nothing that has ever existed on film. I’m groping for a reference point. 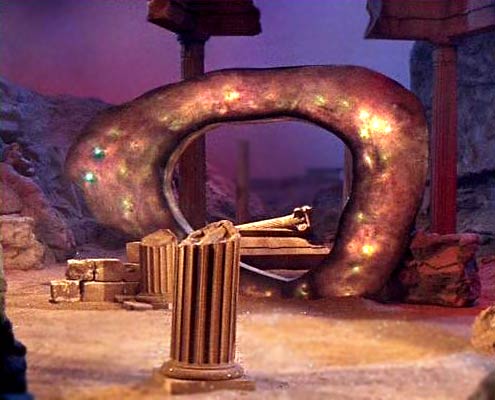 It actually looks a bit like the planet from “The City on the Edge of Forever”, the first season Star Trek episode about a bitchy, sentient doorway through space and time that tells people that they have to kill Joan Collins, or else the Nazis will win World War 2. The rerun of “City on the Edge” actually aired in August 1967, just a couple weeks before they taped this episode, so for all I know the Dark Shadows lighting director was an early Trekkie.

I know, that’s a bit of a stretch. I’m just saying that it doesn’t look a lot like General Hospital anymore.

David wakes up screaming, and Vicki rushes to his side. She’s wearing a lavender dress and he’s got butter-colored pillowcases, so maybe everything looked like this in late summer 1967.

David looks Vicki straight in the eyes, and like the doomed prophet crying in the wilderness, he tells her every true thing that she’ll never believe.

David:  Vicki, he’s in a room somewhere with a coffin in it. He’s dead!

Vicki:  David! You know as well as I do that Barnabas isn’t dead.

It’s a heartbreaking scene, actually. He’s the one person on the show who can see things clearly.

Vicki:  David, I think maybe you’re coming down with a fever.

David:  Why don’t you listen to me!

Vicki:  I will, as soon as I get you some milk.

David:  Where are you going? Don’t leave me alone in here!

And, bless him, David Henesy is nailing this moment. If there’s one thing that a kid can connect to, it’s the feeling that the grown-ups aren’t paying attention.

David:  Haven’t you been listening to anything that I told you? Sarah’s dead.

It’s hard with these goldfish people to get a new idea to stick in their heads. I had this exact conversation so many times when I was a kid. 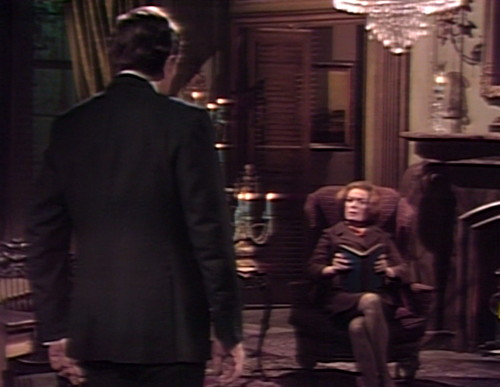 Over at the Old House, Barnabas comes home to find Julia chilling in the drawing room. He’s not thrilled.

Barnabas:  You have nothing better to do than to sit around reading books at a time like this?

It’s a bit brusque, but he’s got a point. These two don’t have a particularly relaxing lifestyle these days. Willie was shot in the back the other day outside Maggie Evans’ bedroom window, and now everybody thinks that Willie’s the kidnapper they’ve been looking for. This is a convenient turn of events for Barnabas, but only if Willie stays quiet.

Barnabas and Julia settle into one of the most cold-blooded conversations of all time.

Barnabas:  I had an eventful and thoroughly depressing evening. First a revealing talk with David, and then a trip to the hospital.

Julia:  Hospital? Why did you go there?

Barnabas:  Hopefully to get the news that friend Willie has passed away.

Barnabas:  No, he clings to life with a leech-like persistence.

It’s unreal. These are the main characters of a television show. Who talks like this? 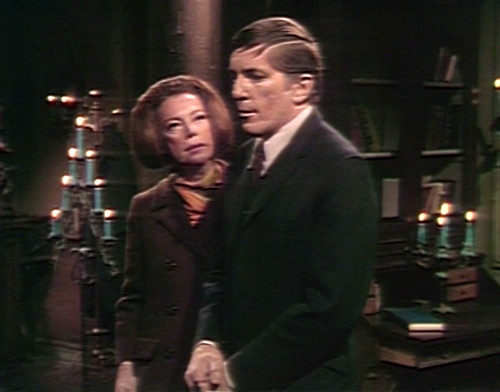 Barnabas is just flustered and unhappy.

Barnabas:  Why isn’t he dead?

Julia:  Barnabas, he is going to die.

Barnabas:  Yes, yes! I keep hearing that. But when? He’s certainly taking his time about it.

I love it. This is a Gordon Russell script today, and I think it’s the best he’s done so far. Russell joined the writing staff a month and a half ago, and he was thrown in the deep end; he and Ron Sproat are each writing a week at a time right now. Imagine that — writing a complete half-hour television script every day for five days, taking a few days off, and then doing it again. That’s not a thing that humans do.

And yet here’s Barnabas and Julia, doing witty, sarcastic daytime television Nick-and-Nora dialogue about how much they want their only friend to die.

Julia:  He is in a coma. He hasn’t exactly got control over the situation.

Barnabas:  Perhaps it’s time that I should take control of the situation.

Julia:  What are you talking about?

Barnabas:  I’m talking about getting rid of him before someone brings us the news that he has miraculously recovered and is writing his memoirs.

Oh, it’s lovely. This is actually the same conversation that Barnabas has been having with both Julia and Willie for weeks — he thinks that killing people will solve all of his problems, and they have to patiently explain that unsolved murders tend to put the authorities on edge.

But everything feels light and fresh today. You’d never guess that this is Russell’s fourth consecutive script. He’s good.

Anyway, Julia has a plan, and once again it involves her hypnotic memory-erasing medallion. She goes back to Collinwood and finds Elizabeth and Vicki talking about David’s latest slice of crazy, and she offers to have a talk with the boy. 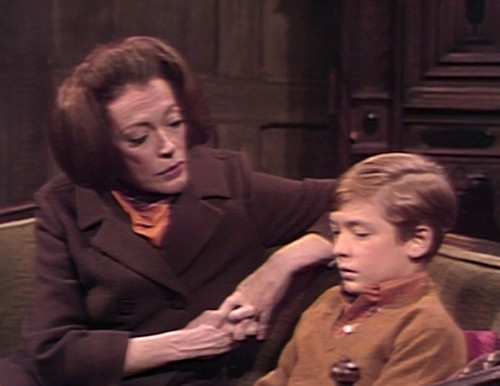 Now, they don’t know that Julia is a doctor, and she runs a sanitarium. They think that Julia is a weird historian who came to do some research about the Collins family and won’t go home. But they’re desperate, so they might as well try anything.

The conversation is surprisingly upbeat, considering David’s recent mental upheavals. Most of it is Julia urging David to relax. He’s actually pretty calm for a kid who’s saying that his cousin came out of a coffin. 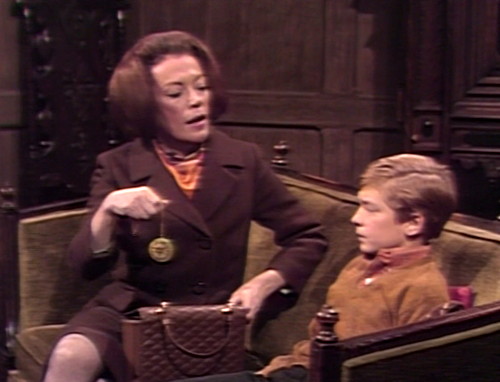 She makes sure he’s sitting comfortably, and says, “Now I’m going to show you something that will make you feel even more comfortable.” She pulls the medallion out of her purse, and gets to work. 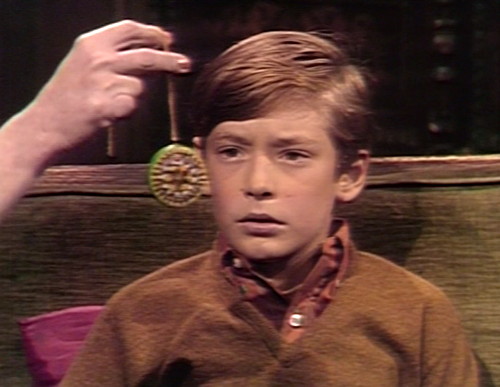 Spinning the medallion in front of his face, Julia says, “Concentrate on it. It’s very pretty, isn’t it? Now, just keeping looking at it. That’s right.” 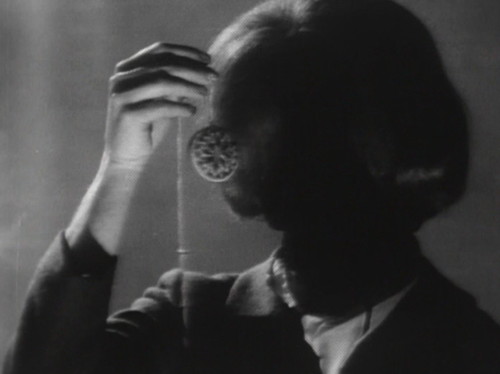 Suddenly, David remembers the faceless woman that he saw in his dream last night — she was holding the same medallion! 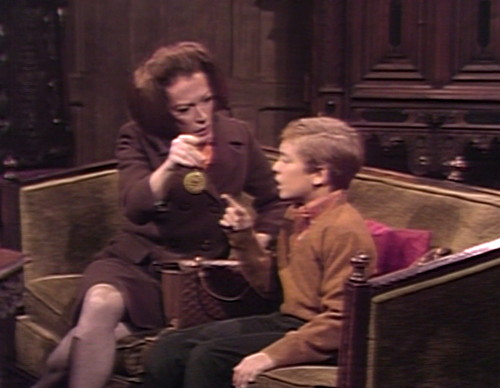 David says, “You were in my dream! I couldn’t see your face, but… you were holding in your hand that same piece of jewelry!”

Delightfully, Julia’s response is “This is just an ordinary medallion,” which is not a sentence you hear people say very often.

But David’s not having it; he runs for the door, screaming for Vicki. And then the Nazis win World War 2. It’s chaos around here.

Tomorrow: David vs the Goldfish People.

Julia pauses to remember her next line, and Barnabas tries to fill the gap:

Julia:  If an attempt is made on his life, they’ll realize that he’s not the one. (She sighs.)

Julia (simultaneously):  The investigation will continue.

Barnabas:  Doctor, what do you suppose that we should do?

Also: When Liz comes into David’s room, he pushes his chair back with a noisy scratch on the floor.

Tomorrow: David vs the Goldfish People.