“Was it the weather that made you think you saw a little girl on the top of the stairs?”

Oh, fantastic — it’s another day, and Victoria Winters is still sitting in her bedroom and staring at that music box, like she’s trying to figure out how to shrink herself and live inside it like the Bottle City of Kandor.

Carolyn comes in, and asks Vicki some questions. The conversation basically goes like this.

Q: What are you thinking about?

A: I saw Maggie the other day.

Q: Where did you see her?

A: In the cemetery.

Q: Why were you in the cemetery?

A: Because it was Josette’s birthday.

So Carolyn stops asking questions. At a certain point, there’s simply nothing you can do. 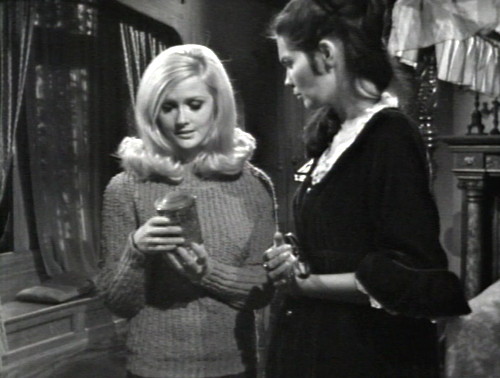 Vicki shows Carolyn the music box, and says, “I was listening to it when you came in. Do you want to hear it?” She doesn’t wait for Carolyn to say yes. It’s probably best not to let people answer questions like that.

Carolyn says that Burke is waiting for Vicki downstairs; they have a date planned for tonight. Vicki says, “Tell him that I’ll be down in ten seconds,” but then she opens the music box and watches it as she slowly brushes her hair.

The completely insane thing about this storyline is that as far as we know, there isn’t any mind-control radiation coming out of the music box. This isn’t a magic spell or a post-hypnotic suggestion; Vicki has just spontaneously developed a Candy Crush-level addiction to staring at a music box.

Carolyn goes downstairs, and finds that both Barnabas and Burke are waiting for Vicki in the drawing room; Barnabas has brought a book from his library for her.

Carolyn, Burke and Barnabas have a conversation where they all talk about “the past”, as in “She does seem to share my appreciation for things from the past,” and “Do you think it’s such a good idea to be so involved in the past?”

It’s aggravating, especially compared to the scenes that Julia and Willie have been in lately. Today’s script is by Joe Caldwell, whose dialogue is usually a lot better than this.

I guess there’s not much you can do right now with a heavy Burke episode. Burke has usually been involved in stories about the Collins family business, which they’re not doing any more. Lately, he’s become the all-purpose sidekick, pairing up with Sheriff Patterson or Dr. Woodard as they talk about whatever mystery they’re currently investigating. Left on his own, the only thing he can do is fret about Vicki and the past. 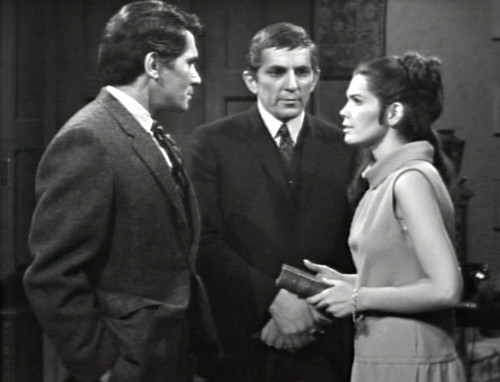 Vicki comes downstairs, and she’s thrilled with the book that Barnabas brought her. She coos, “Just by touching it, I can tell that it’s very, very old.”

Never mind the vampires and ghosts; the really unbelievable thing about this storyline is that even one of these guys is interested in her.

Vicki and Burke end up having an argument about whether she should be reading about the past. It’s not one of the all-time great arguments, but this is a lovely shot, with Barnabas standing between them as they quarrel.

Amusingly, Barnabas seems genuinely uncomfortable with the awkward situation, looking sheepish and muttering that he ought to go. This is a guy who kills people with his teeth.

Barnabas leaves, and Vicki and Burke continue to argue. There’s a storm brewing outside, and for some reason, Burke thinks that’s a reason to leave the house. At one point, he says, “Vicki, let’s go. The storm is about to start.” It’s very odd.

The interesting thing about the scene is that Burke’s head is casting a shadow over half of Vicki’s face, and they don’t do anything about it. You would imagine that staying out of other people’s lights would be a standard soap actor skill, but nobody seems to have clued these two in on it. They just stand in the same positions for the whole scene, as if the shadow is meant to symbolize the light and dark forces that are battling for control of her heart. I might be overthinking it.

Eventually, Burke walks out, and we’re left alone with Vicki, who’s successfully chased all of the other characters off the set. Worst-case scenario.

At the Old House, Barnabas is looking out the window at the approaching storm. Then there’s a knock at the door and guess what, it’s Vicki. She’s come over to apologize for the awkward incident with Burke.

Barnabas does his usual charming “don’t think of it for another moment” shtick, and then Vicki says she ought to get back to Collinwood.

Barnabas:  But I believe the storm has already started.

Because apparently Vicki thinks that if she hurries, she can make time go backwards. They open the door, and it’s pouring rain.

Barnabas:  Oh, you can’t go out in that.

He puts his hand on her shoulder, and gently leads her back inside the house, saying, “Wait until it lets up just a little bit.”

Ladies and gentlemen, Victoria Winters is literally not smart enough to come in out of the rain. The prosecution rests. See you on Monday.

When Carolyn knocks on Vicki’s bedroom door at the start of the episode, someone in the studio says, “I can’t hear her.”

Burke says to Vicki, “I just think you should get off this hickory — history kick for a while.”

Reassuring Vicki that it’s okay if she stays with him during the storm, Barnabas fluffs his line: “Well, I can always tell Willie to tell them not that you are quite all right.” 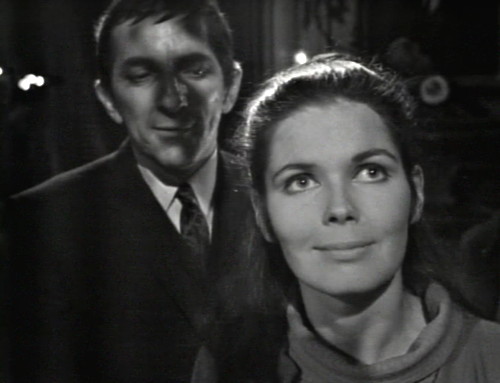