“He never intended for her to die. Only to live.”

At the end of today’s episode, Barnabas is going to sneak into the room where Vicki’s sleeping, and lean over to bite her. I know, spoiler warning, but seriously it’s the only possible ending that this episode could have.

There’s a storm outside, Vicki is stuck at the Old House, and Barnabas has invited her to sleep in Josette’s room. What do you think is going to happen, they’re going to start a fantasy baseball league? Please.

In fact, the only surprise here is that the bite didn’t happen at the end of the last episode, because that would have been a great Friday cliffhanger. These two episodes could easily have been compressed into one. But they weren’t, so now we’ve got half an hour to kill before the inevitable vamp attack.

And more bad news: Vicki is going to talk through a lot of it.

Vicki:  Somehow, the idea of spending the night in her room appeals to me.

Vicki:  I don’t know. I’ve always felt a closeness to her.

Barnabas:  I wonder why.

Vicki:  I suppose it’s because I don’t know who my ancestors were, and I’ve always liked to imagine she was one of them.

Okay, let’s take a second to unpack that statement.

For one thing — her use of the word “always”. Vicki grew up in a foundling home, but she only came to Collinwood last year, and her first encounter with Josette’s spirit was about eight months ago.

So who were her previous fantasy ancestors when she was growing up? Did she just pick people randomly out of a magazine? (“I’ve always liked to imagine that Abbott and Costello were my ancestors.”)

Also, a quick defense of orphans as a class — growing up in a foundling home does not necessarily make you this crazy. You have to work at this.

But Barnabas is playing into it.

Barnabas:  It’s very easy for me to believe that you are descended from Josette.

Vicki:  Why do you say that?

So here’s another fact about orphans: They’re usually quicker on the draw than this.

Does she really not understand that he’s crushing on her? Her obsession with Josette is a secondary problem compared to her inability to understand other people’s motives. I think what we have here is a subnormal orphan. 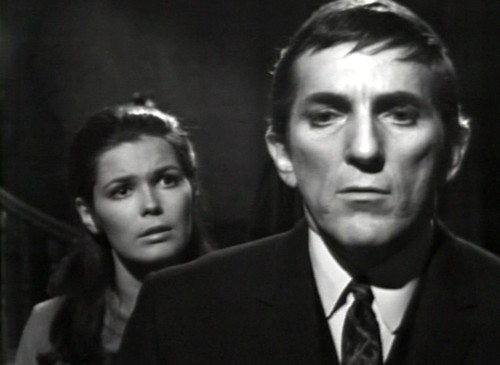 Vicki remembers the night a couple months ago when Barnabas told her the story of Josette in desperate flight, jumping from the top of Widows’ Hill.

Vicki:  Who was chasing her?

Barnabas:  Her lover. The man who loved her more than anyone else in the world.

Vicki:  Do you know who he was?

This is an obvious lie, and it’s a nice, revealing moment. Naturally, we all know that it was actually Barnabas who was chasing her, because we watch television and we understand subtext.

But blaming Jeremiah is a new twist, and it brings up a fun option they could have gone with — Barnabas the player.

“No, girl, that wasn’t me, that was Jeremiah. He’s always doin’ crazy shit like that. Yeah, don’t worry, girl, I got you. You’re safe with me.”

But Barnabas isn’t really playing Vicki, because she’s completely oblivious. He’s actually playing us, in the audience. He’s posing for the camera, inviting us to feel sorry for him, which isn’t easy to do when a) you’re ten minutes away from a blood-ritual date rape, and b) you’re discussing the night that you chased your old girlfriend off a cliff.

He even has a moment when he dials back the blood lust, and offers to take Vicki back to Collinwood.

Barnabas:  The storm seems to have lessened somewhat.

Vicki:  Do you think I could make it back to Collinwood?

Barnabas:  Possibly. I’d be delighted to accompany you if you wanted to go back. I leave it entirely in your hands.

But she chooses to stay; she wants to sleep in Josette’s room. He stands with his back to her, as if he’s appealing to the audience: She wants to stay! I’m trying to let her go, but she won’t leave! What can I do?

This brings up something troubling that’s happened during the course of this storyline. Several months ago, when Barnabas first met Maggie at the coffee shop, we were seeing events from Maggie’s point of view. At the time, we didn’t know much about Barnabas, and there was actually some ambiguity about whether he was really a vampire. Like Maggie, we were intrigued by the newcomer, and unsure about his intentions.

Four months later, we know exactly what Barnabas is, and what he’s capable of. We’ve seen the whole first run-through of his crackpot build-your-own-Josette scheme. That knowledge, which we share with Barnabas, is the thing that’s creating tension in this scenario.

If you take away that knowledge — in other words, watching the scene from Vicki’s point of view — then this episode is about a polite man inviting an acquaintance to stay in the house until the rain stops. That’s not a television show.

So the only thing that makes this a dramatic scene is that we’re actually watching from Barnabas’ point of view. Vicki has transitioned remarkably quickly from “audience identification character” to “entree”, and frankly we’re kind of hoping that he goes for it, because otherwise this episode is going nowhere.

This essentially makes us accomplices to the upcoming blood-ritual date rape. We should probably get around to feeling bad about that at some point.

Vicki goes upstairs to Josette’s room, and now it’s time for one of the Great Moments in Time-Killing. 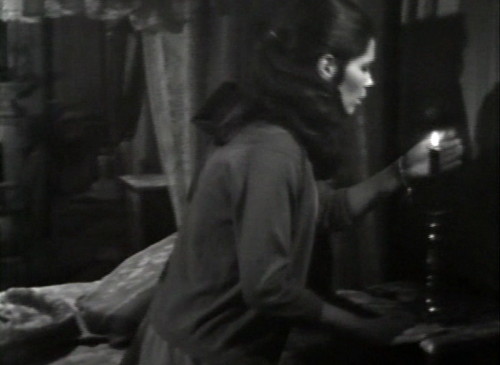 So — ten points for the fire safety lesson, I guess, but that is a full two minutes that just doesn’t feel like a television show. They did scenes like this on Twin Peaks, and everybody said that David Lynch was a genius.

They’ve also just missed a great opportunity to do some product placement for electric light bulbs. (“I’ve always liked to imagine that Thomas Edison was one of my ancestors.”)

The rest of the episode is basically just more time-filling, with recaps about Barnabas’ sister Sarah, who died when she was young and is now haunting the house and making Barnabas review his lifestyle choices.

Willie shows Barnabas a child’s ball that he found near the coffin downstairs. Sarah’s ghost is apparently just scattering objects everywhere. Maggie has Sarah’s doll, Sarah was trying on her old dress last week, and now Willie’s found her ball. The kid must have driven her parents crazy — even when she’s dead, she won’t pick up after herself.

It’s not a particularly interesting scene, really. I’m only mentioning it here because Vicki’s not going to be able to shut up about it for a week.

It goes on and on until finally it’s the end of the episode. Barnabas walks into the bedroom where Vicki is sleeping and leans over the bed. And he doesn’t even have his fangs in, so all in all it’s pretty much a waste of matches. It’s like they don’t even care about the rainforest.

In the teaser, they play the dramatic sting music cue at the wrong time. The cue is Vicki saying “Josette’s room”, but they play it when Barnabas says “Josette’s room,” a couple lines too early.

At the start of the final scene, the camera is tilted a little too far to the left, so the edge of the set is visible. If you watch the left side of the screen, you can see Jonathan Frid walking around the set and then coming in through the door.

In case you were wondering: Sarah’s voice was pre-recorded in this episode. Sharon Smyth didn’t appear, and she’s not credited. 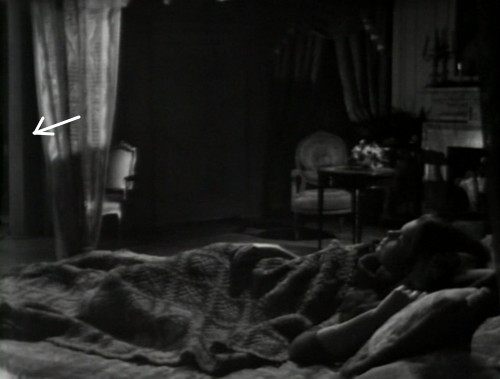