“You look ghastly, Loomis. I mean this only as a compliment to your histrionic talents.”

It’s morning at Collinwood, and hey! Willie’s back. Now Jason’s angry, Willie collapses, and there’s a very good chance that we might end up doing the last three episodes all over again.

But things pick up when Roger charges into Willie’s room at the start of act two. He basically has the same scene with Willie that Jason just had, but it’s Roger, so it’s fantastic.

Roger is played by Louis Edmonds, who was born in Baton Rouge but talks like he’s from a Dickens novel. He wakes Willie up with a sneer, and tells him to get up. Everyone knows that Willie left the house last night; he’s not sick, and he needs to leave.

Still groggy, Willie holds out his hand and asks Roger to help him up. Roger takes a step back, and barks, “I wouldn’t do such a thing. It’s humiliating to watch this charade of yours, let alone participate in it.”

Willie struggles to get to his feet, groaning, “I don’t think I’m gonna make it.”

And that’s something that I love about Dark Shadows, even when the plot’s going in circles: There’s always somebody around who wants to make sure you’re having a good time. Sure, sometimes it’s the guy working the fog machine, but still, someone’s making an effort. 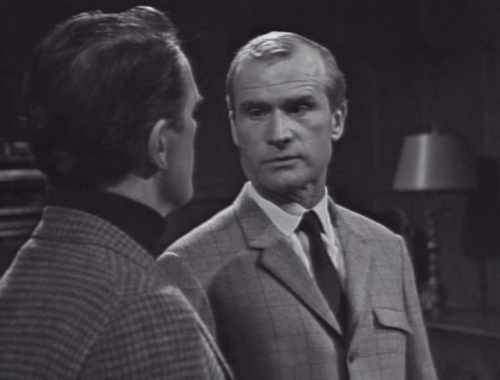 Willie won’t move, so Roger goes downstairs and berates Jason for a while. Jason agrees that Willie’s condition is hard to believe, but what if he takes a turn for the worse? Another arched eyebrow from Roger: “In his case, a mild cough would be a turn for the worse.”

Jason offers to call a doctor, to figure out what’s going on. “Well, you’d better allow me,” Roger sighs. “As one of the locals, I can get one of the less addled quacks we have serving the countryside here.”

You see what I mean? Who writes dialogue like this?

Then the phone rings. One wry telephone call later, Roger excuses himself: “The local sheriff has periodic cravings for intelligent conversation, which I alone seem to be able to satisfy.”

Oh, he’s lovely. He could just keep talking like this forever and I would watch this show until the end of the world.

So, now you get your first look at Collinsport law enforcement. There are four different actors who play Sheriff Patterson over the course of the show, all of them inadequate. There’s a long history of ghastly murders and mysterious disappearances in and around the Collins estate, and yet the Sheriff does not make a single justified arrest in the entire series. There are actually more crimes solved on Dark Shadows by dead people.

The one good thing you can say about Sheriff Patterson is that he’s not the Collinsport sheriff who gets killed and then brought back to life as a zombie. That’s a different one. 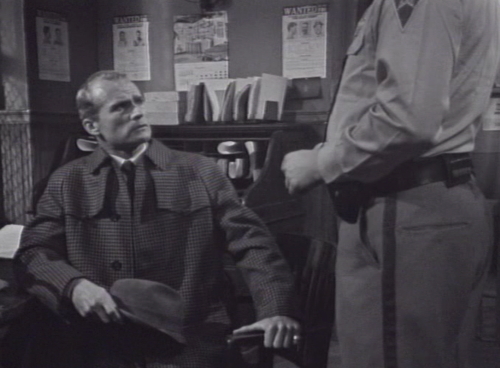 The Sheriff has asked Roger to come to the station because there have been some disturbing reports about cattle dying on the Collins family farms. (By the way, this is the first and possibly only time that anyone’s mentioned “family farms” on the show. The Collins family owns a fishing fleet and a cannery.)

Roger assumes that if there’s a problem with the cows, it should be a matter for the veterinarian, not the police. But the Sheriff says that the cows weren’t sick — they died because somebody drained all of their blood. Roger is shocked: “What kind of depraved vandalism is that?”

Patterson says that it’s not just happening on the Collins farms — other farms in the area have seen the same thing, which seems hard to believe. How many cows can one guy possibly drink? Barnabas appears to be going through the livestock like a buzz saw. 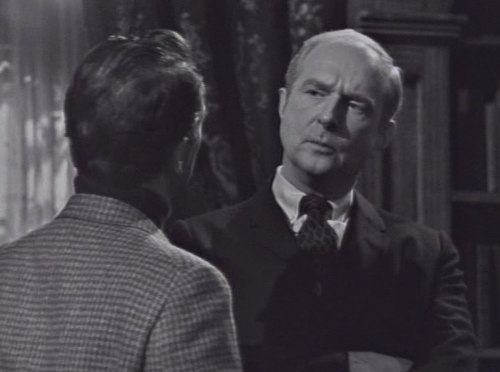 But that’s enough incompetent police work; let’s go back to Collinwood for some incompetent medical care.

This is the first appearance of Dr. Dave Woodard, who takes on an important role over the next couple months. They’re introducing a doctor in the show because they’re planning to knock a stake into Barnabas in about six weeks, so they want a Van Helsing lined up in case they need one. You never know how that might come in handy someday.

As with the Sheriff, there are three actors who play Dr. Woodard over the course of the show. This one isn’t the good one.

The doctor examines Willie, and tells Jason that the boy is suffering from “an enormous loss of blood”. He doesn’t seem super alarmed about it, though. He just crosses his arms and frowns, like it’s irresponsible to lose all that blood. It’ll probably turn up in the very last place you look.

Roger comes home, and the doctor explains that Willie’s lost a lot of blood. Roger is stunned — he may now suspect that Willie is secretly a cow.

But Woodard assures them, “He’s in no real danger. Given a little time, and a lot of rest, the right food… he’ll be fine.” Yeah, also maybe a blood transfusion, but let’s not get ahead of ourselves.

Meanwhile, Willie’s upstairs having a nightmare, and we take another slow pan across the cemetery set. That’s still not an ending! It’s the third episode in a row that just stops because they’ve run out of stuff to do. They’ll get the hang of this cliffhanger thing eventually.

The “cows drained of blood” is (probably) a reference to H.P. Lovecraft’s The Dunwich Horror, which is also the inspiration for Dark Shadows’ Leviathan storyline, starting late 1969.

In The Dunwich Horror, a mother gives birth to two monstrous children — one looks more or less human when he’s got clothes on; the other is a mostly-invisible monster that grows as big as a house. The family feeds the monster child on blood — first taken from the human family and then, as the kid gets bigger, from cows.

Zechariah came to lead a pair of Alderney cows which Old Whateley had bought of his son Curtis. This marked the beginning of a course of cattle-buying on the part of small Wilbur’s family which ended only in 1928, when the Dunwich horror came and went; yet at no time did the ramshackle Whateley barn seem over-crowded with livestock. There came a period when people were curious enough to steal up and count the herd that grazed precariously on the steep hillside above the old farmhouse, and they could never find more than ten or twelve anemic, bloodless-looking specimens.

Evidently some blight or distemper, perhaps sprung from the unwholesome pasturage or the diseased fungi and timbers of the filthy barn, caused a heavy mortality amongst the Whateley animals. Odd wounds or sores, having something of the aspect of incisions, seemed to afflict the visible cattle; and once or twice during the earlier months certain callers fancied they could discern similar sores about the throats of the gray, unshaven old man and his slatternly, crinkly-haired albino daughter.

As the creature grows, the family has to keep it supplied with increasing cattle purchases, until the Bad Thing happens and it all comes to a head.

Roger has a lot of dialogue in this episode, most of it sarcastic, and he struggles a bit. An example from his argument with Willie: “If you think you’re going to my sister and try to get her to let you stay on, for any… longer time… it’s not going to do any good. Because she sent me here to ask you to leave. To tell you to leave.”

In his scene in the drawing room with Jason, Roger looks at the teleprompter so often that they have to cut away a couple times just to disguise it.

Then the sheriff calls, and Roger says, “Yes? This is… this is Mr. Collins,” and it’s possible that by this point he may have actually forgotten his character’s name.

They also run the wrong credits at the end, listing Jason, Carolyn, Willie and Vicki as the episode’s cast.