“It’s hard to believe that a few hours ago you were collapsing all over the place.”

It’s sunset at Collinwood, and Willie’s out of bed. Jason enters the sickroom and finds Willie putting on his shoes, and here we go again.

Come on, guys, hurry it up! There’s a good story here, just waiting to be told. All we need is for Barnabas to stay away from the livestock for five minutes and start paying attention to the humans. But not today, apparently.

Downstairs, Liz greets the news of Willie’s amazing recovery in a sarcastic mood. “I must check with the doctor,” she says. “He must have given him one of those new miracle drugs.” Jason agrees that it’s time for Willie to go.

But before he goes, there’s time to set up one more commercial break. “Wait a minute,” Willie says. “I gotta say something to Mrs. Stoddard.” Liz brushes him off, but Willie takes a step forward and starts making acting gestures.

And then there’s a big musical sting, and everyone suddenly develops a common soap opera malady called EPCP, or Excessive Pre-Commercial Pausing. The syndrome is usually brought on by someone asking a pointed question, like “What are you doing in my bedroom?” or “Where did that baby come from?”

Symptoms include puzzled looks, moistening the lips, and standing completely still and not saying anything for up to five seconds.

Unfortunately, soap opera rules dictate that anything exciting that’s promised before a commercial break is guaranteed not to happen. The after-effects of EPCP are always the same: either you tell a lie, which is grudgingly believed, or somebody interrupts, and you change the subject. That’s what happens here — Liz says she doesn’t want to hear anything from Willie, and we move on.

This make-believe climax moment is a crucial trick of the serialized narrative. Every break in the flow is an opportunity to lose the audience — they have to keep you watching through the commercial break, and they want you to come back tomorrow. As Agnes Nixon used to say, the soap writer’s motto is: “Make ’em laugh, make ’em cry, make ’em wait.”

The technique they’re using in this case is one of the most literal possible ways to keep people watching — a character steps forward and says, “It’s important!”  They’re going to get a lot better at this.

The success of Dark Shadows in this period is usually attributed to introducing a vampire to the show, and obviously that’s part of the story — but this is also the period when the writers figured out how to construct cliffhangers that inspire teenagers to run home from school to see what happens next. 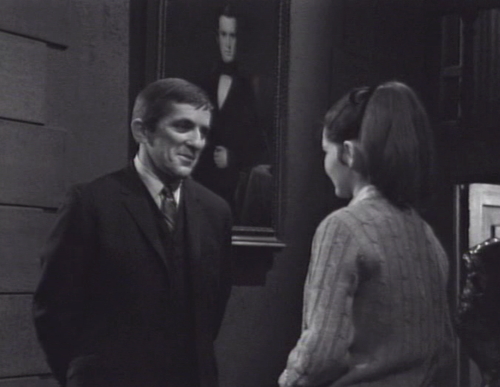 But that’s still a few weeks away. Right now, we’ve got Barnabas showing up at Collinwood for a social call with Elizabeth. Barnabas, come on in, make yourself at home. Pull up a cow.

Liz tells Barnabas that she’s decided to let him move into the Old House, and he’s delighted. Then Vicki and Barnabas have this amazing exchange:

Vicki:  You mean that you actually want to live there?

Barnabas:  Yes… Live! That’s exactly what I intend to do.

Which is just a breathtakingly weird thing to say. Even knowing that he’s a vampire, it doesn’t really make sense.

He’s been dropping a lot of these Dracula clues lately — lines that tease the audience by making oblique references to eternal life. It’s a trick that’s lifted directly from the 1931 Bela Lugosi film, specifically the scene where Count Dracula tells a guest, “I never drink… wine.”

This is a more subtle way to “make ’em wait”. (Or, at least, it’s more subtle than “It’s important!” which is not particularly hard to achieve.) We’ve seen Willie’s wrist and we’ve heard about the cow attacks, but so far all we’ve seen Barnabas actually do is talk to people and pose in the moonlight. Anyone in the audience who missed the last couple weeks wouldn’t realize that Barnabas was anything other than the polite newcomer that he appears to be.

So these little Dracula moments are there to onboard new viewers, and keep the rest of us paying attention. They’re like little promises that any minute now, this guy is gonna get his fangs out and bite somebody.

Now, in the movie, Dracula only had to say an obscure private joke like that once. But this is a daily show and we’ve got new people tuning in, so a couple times an episode, Barnabas has to say stuff like this:

Vicki:  Won’t it be awfully expensive to put so much money into something you don’t own?

Barnabas:  You cannot put a price on what I intend to do there.

So it’s a big relief when we finally see the fangs. I’d tell you when that happens, but first I have to describe the next scene. It’s important. 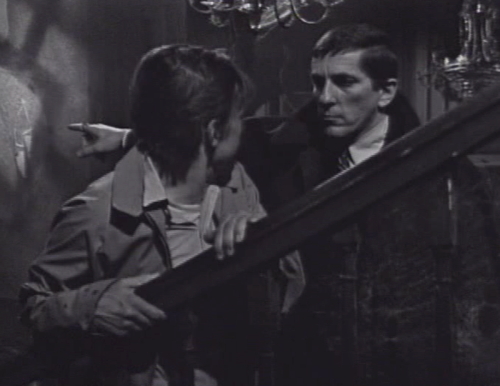 Next we see Barnabas opening the doors at the Old House, and the dry ice machine is just going like mad, the fog blowing in huge gusts into the house. I don’t think fog works like that, but I’m not an expert.

Willie’s there too; it’s actually his first scene together with Barnabas. Before this, Willie’s only been interacting with the portrait. Barnabas tells Willie, “You know what you have to do,” and then sends him out into the night.

We hear dogs howling, which is a new thing that’s going to happen a lot. Then it’s just Barnabas standing around in his new house.

Another dull ending! We didn’t even get to see the cow. A good onscreen cow attack would liven things up considerably.

Barnabas reminds Liz of his proposal to move into the new house. He means the Old House.

There’s a weird metallic squeak from offscreen after Barnabas enters the Old House.