For unto us a child is born, unto us a son is given. And all we had to do is open this box, which is super convenient. 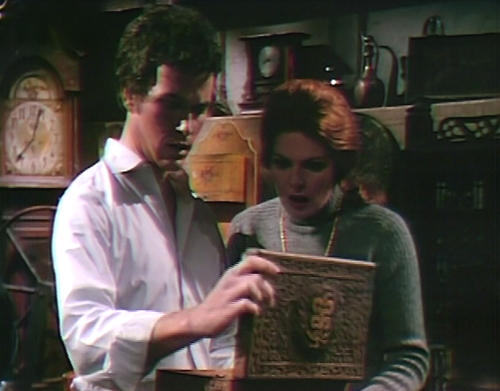 Those reckless antiquers Megan and Philip Todd have apparently been chosen as the Chosen Ones by the choosing ones that choose Chosen Ones. The implication is that they’ve been chosen according to some ancient prophecy, which promises to guide the Leviathan people, whoever they are, toward a glorious future. Considering what I know about how this storyline plays out, those prophecies must have been made by some off-brand discount recruiting service, because this plan isn’t going anywhere except a stunning collapse on every level.

I mean, if you’re going to go to all the trouble of peering through the mists of time to find the fastest route to global domination, you’re going to want to weigh a few different possibilities, right? Maybe interview people, hold auditions, map out some kind of basic strategy. You could imagine the Leviathans in a boardroom somewhere, hooded and solemn, while a facilitator walks them through a SWOT analysis.

And yet they landed on the Todds. It’s baffling. Megan and Philip have no prior experience with apocalyptic death cults. They haven’t studied any mystic books, or explored mysterious jungles. They don’t have untapped psychic abilities to any noticeable degree. I don’t even think they have babysitting experience.

But now their moderately successful antique shop has been chosen as the dwelling-place for a planet-crushing interdimensional space baby, which has been released from the mystery box and is now busily building itself some flesh somehow.

As part of the doomsday cult introduction packet, the Todds also find an ancient book in the box, which must be bigger on the inside, because that book is clearly way bigger and heavier than it should be. They open it up, but it’s written in an obscure language that they don’t even recognize, so that looks like another flaw in the Chosen One selection process. Then they put the book down on a table in their antique shop, which means that it is now for sale.

The incompetence here is simply staggering. The Leviathans need to stop counting on rallies and free media, and start developing a ground game. 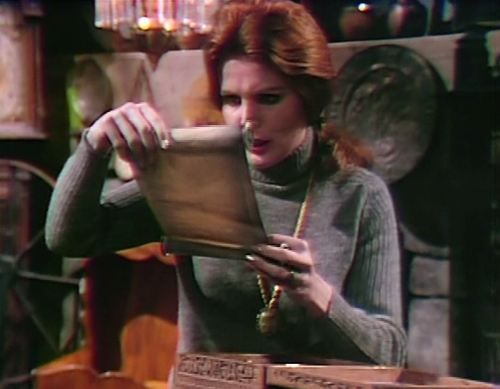 But there is a precedent for the half-remembered and the indecipherable, because H.P. Lovecraft stories are always about communication gaps.

Lovecraft had the odd idea that everything degenerates over time — that people and animals and soceties and ideas and art forms invariably get worse, rather than more complex and more interesting, as is actually the case. For Lovecraft, the civilizations of the past were smarter and wiser and more aware of the fundamental facts of life, like for example which terrifying cosmic entities are going to rise up someday and eat the sun. Everything that happened since some arbitrary cut-off point — every conclusion, every invention, every advance — has just made us stupider and more out-of-touch.

I don’t know why Lovecraft thought that was true, when all of the historical, anthropological and archeological evidence points in the other direction. He just did.

So most of his stories are about investigations, often led by academics or naturalists, who try to piece together the stray bits of ancient wisdom that have managed to survive. There are manuscripts to decipher, fragments to glue back together, holes to be dug and peered into. They tried to warn us, these ancient smartypantses, but we’ve become so stupid and lame that we can hardly understand them.

And most of the time, the moral of the story is to not even try. Lovecraft’s story At the Mountains of Madness is a report written by a geologist from Miskatonic University, describing an expedition in the Antarctic where they discovered an unbelievable treasure trove of information about prehistoric Earth. But the purpose of his story, he tells us over and over, is to discourage people from ever going back there, because there are horrible things that pose an immediate peril to humankind, and they should not be disturbed. So he describes, for example, an incredible set of wall carvings that document the entire history of an intelligent species we didn’t even know about, and he says, oh, how I wish we’d been able to take more pictures, and then he insists that nobody should ever go back and look at them again, because learning things is dangerous.

And even that species got stupider over time, apparently. The explorers find a further set of carvings that were produced later, which show a “degradation of skill,” which means that techniques that passed from one generation to the next got worse with each iteration.

Information is lost over time, and nobody can hope to improve upon their forebears’ work. So everything gets worse, and everybody gets stupider, and there is no hope for humankind, unless we unlearn and forget as furiously as we can.

This is the mindset that made the Leviathans choose Megan and Philip. Finally, they said, rubbing their tentacles together in satisfaction, we have found the stupidest possible chosen ones. And then they fell off their chairs, because they’d forgotten how to sit.

Once the shopkeepers have marked down the ancient artifacts and chucked them on the sale table, Megan and Philip call it a day. In their dreams, they’re visited by former vampire Barnabas Collins, who they now recognize as their master.

The main take-home from this storyline, I think, is how easy it is to get people under your thrall. It happens almost instantly, with very little effort. The hooded figures managed to hollow out Barnabas’ skull and fill it up with Leviathan goop by doing a little dance routine. Then Megan and Philip open the box and read a poem, and bam, they no longer get a say in how they’re going to comport themselves. Apparently this broke-ass worldview pretty much sells itself; you just point and shoot.

He pauses a moment, to let that sink in.

“You must close off all the windows,” he continues, “so that no light may come in. The room must be dark, for darkness knows us, as we know darkness.”

“You must remove all furniture, except that which is necessary. Do you understand me?” 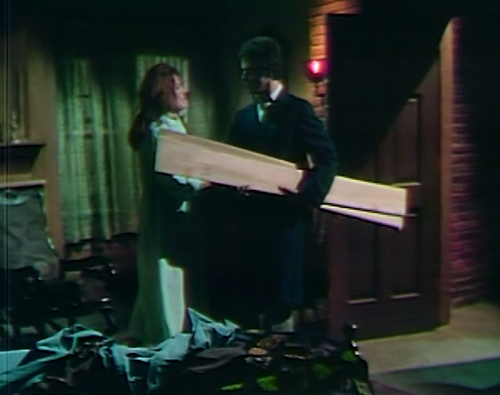 Megan wakes up and discovers that Philip has had the same dream, so they both start hauling furniture around and nailing up lumber. They’re going to be busy for a while, so we might as well talk about The Dunwich Horror.

Dark Shadows fans sometimes say that the Leviathan storyline is based on The Call of Cthulhu, because that’s the Lovecraft story that people remember the name of, but it’s actually an adaptation of The Dunwich Horror, which was published in the pulp sci-fi magazine Weird Tales in 1929.

The story takes place in Dunwich, a fictional town in rural Massachusetts which is essentially cut off from the world — a disturbing patch of run-down homes and dilapidated farms, ringed with hills that are topped by mysterious stone circles. The people in the village have interbred for a while, and now they’re decadent and degraded, just like everything else in Lovecraft Country.

There are strange noises in the hills that no one can explain. The whippoorwills crowd around when somebody’s dying, chirping in time with his final breaths, trying to catch the soul before it flies away. There isn’t much of a tourism industry.

The Whateleys live on a farm four miles outside the village, and there are wicked doings that go on there. Old Whateley has a library stocked with forbidden volumes, and he communes with things that he shouldn’t. At the beginning of the story, his daughter Lavinia gives birth to an uncanny child — the thing that men call Wilbur Whateley. There are dark rumors about the boy’s paternity, and even the rumors don’t match up to the grim reality.

Wilbur is dark and goatlike and inscrutable, and he grows much faster than he should. Within three months, he’s as big as a child should be after a year, and by eleven months, he’s already talking.

Meanwhile, Lavinia’s father starts on a long-term solo carpentry project, restoring the abandoned upper story of their farmhouse. He boards up all the windows, and nobody is ever admitted upstairs; Wilbur has his own room downstairs, lined with bookshelves full of Old Whateley’s rotting reading material, including an incomplete edition of the dreaded Necronomicon.

Wilbur will continue to grow at an alarming rate, reaching around eight feet tall by the time someone finally evaluates the situation, and takes appropriate action. That someone is a dog.

So that’s the beginning of this gruesome tale — a mysterious child, an old book and a boarded-up room.

There’s one big difference in this adaptation, and it’ll be interesting to see how it plays out — Old Whateley and Lavinia aren’t being controlled by anyone. They aren’t innocents dragged into this predicament by an all-knowing “master”. They came up with this terrible plan on their own. But Megan and Philip have no control over what’s happening to them; they don’t know where they’re going or why. All they have is a shared dream, and a book they can’t read.

Too big to fit in the box, too silly to be from anywhere else, that book will reshape our little vampire soap opera into new and unguessable forms. All the Todds have to do is make sure nothing happens to it, by hiding it somewhere and not just leaving it on display in their shop, which is what they’ve done. And somewhere, beyond the stars, the Elder Things are tripping over rakes, and dropping their smartphones in the toilet.

The sound effect for the spirit escaping from the box is different than it was in yesterday’s episode. Yesterday’s it sounded like a hiss; in today’s reprise it’s a long whistle.

When Megan reads the poem from the scroll, she says “wedged between ancient sacred stone” — it’s supposed to be stones, to rhyme with bones. She passes the scroll to Philip to read the second half, which he clearly reads off the teleprompter. I would’ve thought they’d write the lines on the scroll, since he’s supposed to be reading it anyway.

The colorful afghan makes another appearance on the show; it appears to have followed us back through time from 1897. We last saw it about three weeks ago in Tate’s studio, but luckily it disappeared from the cottage before the studio burned to the ground. Now it’s on Megan and Philip’s bed. 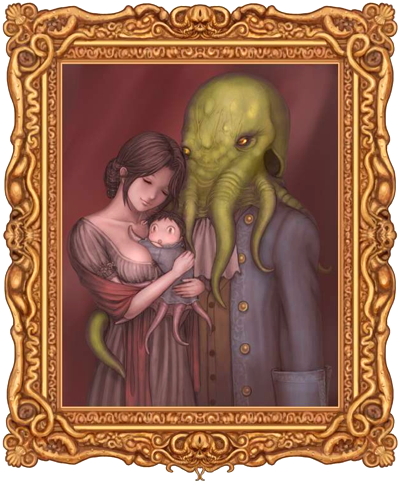