“I didn’t mean to almost try to kill you.”

So, the story so far: Barnabas got up out of his coffin, bit Willie on the wrist, apparently, and then went out and drank a whole cow. Now Willie’s at the Blue Whale drowning his sorrows, and who can blame him? He’s competing with livestock, it’s a tough gig.

But you have to hand it to the makeup department. The man said “make Willie look haunted,” and they sure did. He looks like James Dean, after the accident.

Jason tries to figure out what happened, but Willie just cowers against the jukebox and denies everything. Jason says that Willie needs to come to Collinwood and apologize to Liz; otherwise, she’ll never let him back in the house. Willie’s frantic — going to Collinwood is the last thing he wants.

“I don’t understand you,” Jason says. “For the first time, I just plain don’t dig you out, boy. And it kinda scares me.”

But somehow, during the commercial break, Jason manages to get Willie out of the bar and all the way over to Collinwood, where he apologizes to Liz and Carolyn. They’re not thrilled.

Jason brings Liz into the drawing room for another conference, leaving Willie in the foyer with Carolyn.

You’ll have to forgive me for posting a long quote, because it’s actually a lovely little scene.

Willie:  Carolyn? You didn’t believe me, did ya?

Willie:  I did mean it. I didn’t mean to scare ya.

Carolyn: And I didn’t mean to almost try to kill you.

Carolyn:  Willie… you almost sound as if you mean that. (He looks at her.) I’d better go.

Willie:  I don’t blame you for not believing me. It’s all right.

Carolyn:  Are you sure you’re okay?

Carolyn:  Because you don’t look it. And you don’t act it.

Okay, I know it’s not The Glass Menagerie or anything, but it’s the first really good scene we’ve had so far. You can tell that they’re both doing their acting class homework.

Carolyn leaves, and Willie’s left alone in the foyer… and he slowly becomes aware that the portrait of Barnabas is staring at him.

This is a neat little narrative trick that they end up using a lot on the show — they treat the portrait as if it’s alive, which implies that Barnabas is able to spy on everyone in the house. It’s spooky. It also means that a character can have a whole scene with a portrait, and they don’t have to pay the other actor to show up. 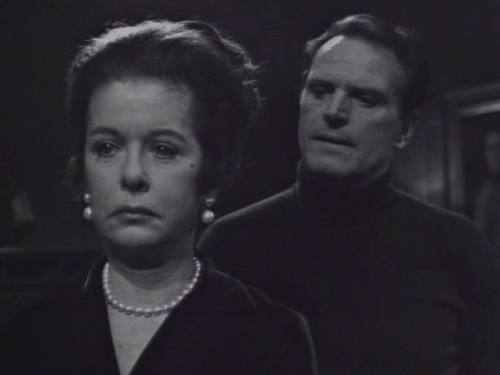 Meanwhile, in the drawing room, we get an example of another great soap opera theatrical tradition: Backacting.

Jason is trying to persuade Liz to let Willie stay — the boy is clearly sick; they can’t throw him out into the street. She says it’s out of the question, and turns away. Jason then does a forty-second monologue to the back of her head, while she emotes to the camera.

It looks fantastic as a shot; it’s only when you imagine doing it in real life that you realize how insane it is.

In fact, it’s such a good trick that they do it again in the next scene, as Carolyn describes how strange and haunted Willie seems.

Technically, this is a variant of backacting that involves looking at the other actor out of the corner of your eye, as they sit on the couch and stare at the side of your head. The more traditional drama schools only teach the pure backacting, but this version is starting to catch on.

Upstairs, we’ve got Jason putting Willie to bed. He notices that Willie’s got a bandage around his wrist, and he reaches out to see it. Willie flips out, hissing, “No! No one can see it. No one touches it! No one! Now, you stay away! You stay away!” because that is how soap opera episodes end. Stay tuned for The Dating Game.

Tomorrow: Not Enough Vampire in Your Vampire Show.

When they’re standing by the jukebox, Willie steps on one of Jason’s lines. He realizes that he’s doing it halfway through the word “trouble”…

Jason:  I’m not angry with you. I just want you to tell me where you’ve been, and then, if you’re in any trouble…

When Willie passes out in the Collinwood foyer, you can see marks on the floor for camera positions. There’s a nice big one pointing right at Willie’s head.

In the drawing room, Liz has what appears to be a partly telepathic conversation with Carolyn:

Liz:  He was obviously sick, so I had to let him stay for a few days at least.

Carolyn:  I don’t think there’s anything else you can do.

The portrait of Barnabas was painted from a photograph taken of producer Bob Costello, who posed in Barnabas’ costume. The head was left blank, and then filled in once Jonathan Frid was cast in the role.

Tomorrow: Not Enough Vampire in Your Vampire Show. 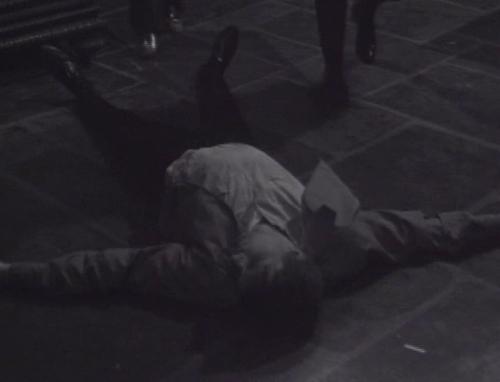