“You’ve seen the strain in this house.”

First of all, I would like to make one thing quite clear: I never explain anything.

“But then something happens,” writes girl governess Daphne Harridge in her personal revenge journal, “just like now, and I feel such hate.”

“Who do you hate, Daphne?” the kid asks, clasping his hands and delivering an even stare. “Tell me.”

The kid is clearly used to this kind of scene. He walked into his governess’ room, came up behind her while she was writing in her diary, read what she was writing, and now he wants answers. He doesn’t betray the slightest bit of anxiety or doubt that this is the natural order of things. He is the heir, she is the help, and therefore he can feel free to peruse any of her personal data that he takes an interest in.

“What else did you see?” snaps Daphne, and the kid goes up a level.

“You never answered my question,” he admonishes. “I was taught to answer questions. Weren’t you, ever?”

She shuts up the book in a locked drawer. “A diary is personal, Tad. I write in it things that I wouldn’t tell anyone.”

He looks off into space. “Do you know, that our minister says that to hate is evil?”

She takes the risk, and hates anyway, and so do I. Sometimes you don’t get much of a choice.

So that will be quite enough of that, thank you. I was under the impression that Daphne Harridge was more or less the perfect nanny; one never knows where one picks up these fancies, but it might have been the fact that the show spent the better part of early to mid September insisting that Tad and Carrie loved and trusted their governess literally more than life itself.

“Oh, Carrie, you do become alarmed so easily,” Tad said, possessing the body of his 1970 descendant. “She hasn’t left us. Don’t you remember? She promised she never would.”

“But then where is she?” cried Carrie, similarly taking the form of her 20th century counterpart. “She’s our governess, isn’t she?”

And that’s pretty much how it went, for three weeks. For some reason yet unknown, here in 1840, Daphne instructed her pupils that when they died, they would return to life in other people’s clothes, and that she would be with them forever.

“I wish Daphne was with us, to help us!” Carrie said, pretty much every few minutes. “I don’t think we’d feel so alone, if she was.” I’ve never seen kids so utterly apeshit over a teacher before.

Daphne did show up, eventually, reuniting with the kids in mortal afterlife, and she was just as much of a grade A sap about them as they were about her. “I must see them,” she explained, at a moment when she couldn’t currently see them, “because I love them.” Later on, when they tried and failed to summon Gerard from the long sleep, she explained, “The way is not as easy for him as it was for me. My path was paved with love… your love.”

Now, television audiences tend to remember visual spectacle better than plot sequencing, or specific lines of dialogue. It’s easy to get away with foreshadowing that doesn’t go anywhere, like the letter that Roger found in the run-up to the 1897 story that said, “Dear Jamison, you must return to Collinwood. I need your help. You must intercede with Oscar. Only you can save me.” There was nothing about that letter that synchs up with what actually happened, but by the time they got to 1897 a couple months later, nobody remembered or cared.

But the Daphne/Tad/Carrie relationship was beaten into us for weeks; it was the driving force of the storyline. It would be impossible for anyone in the audience with a functioning brain stem to forget about Tad’s love for Daphne, Carrie’s love for Daphne, and Daphne’s love for vice versa.

But what do you get when you feed the birds? Fat birds.

It was always a bit perplexing that kids who appeared to be around 15 or 16 had a playroom full of kids’ toys and were that goofy about a live-in tutor, but you could imagine them forming a bond like that with a governess who’d known them for several years. But then they went out of their way to establish that the kids had a different governess until a month ago, when she got her head ripped off by a monster who was starting a collection. Daphne’s only been on the job for three weeks, and so far it’s not going that well.

When Carrie was finally introduced to Daphne last week, she made it very clear that she couldn’t care less; she’s developed a schoolgirl crush on Gerard and has no interest in paving a path with love, or anything else. And they’re not backing down on that one bit — in today’s episode, the first time that we see Tad and Daphne together, the boy won’t shut up about it.

Carrie:  I don’t see why we have to learn Latin. No one ever talks it anymore!

Daphne:  Well, if you know Latin, it’ll be easier for you to learn other languages.

Carrie:  But I’m not going to learn any other languages!

Daphne:  Well, you may at least learn French. You might travel, when you’re grown up!

And then all hell breaks loose in the classroom. Tad tattles about Carrie’s secret love notes to Gerard, and Carrie cries, “Tad, that’s enough!” They start to bicker, and then Daphne stands up and says, “All right, that’s enough!” Then Tad snipes, “You know, it was fun having you here, when you first moved in.” They don’t specifically say that this is enough too, but it’s implied.

Now, I’m not surprised that the show is being inconsistent about something; it’s always been clear that they’re making things up as they go along, with no particular plan except to try a bunch of stuff and keep the bits that work. If it makes a better story, or even a better scene, to have the kids hate each other and the rest of the world, then sure, go ahead.

But this is the first time that we’ve seen Daphne teaching the kids, and the scene lasts for just under sixty seconds before they get interrupted by Samantha. How hard would it be to take that minute, and have the characters like each other? It would be the work of a moment to write a line like, “You know, I thought I was getting too old for a governess, Daphne, but you’ve taught us so much, and it feels like we’ve known each other for ages.” And then they go and say exactly the opposite of that.

A minute later, when Tad’s mother comes in and starts yelling at everyone for no reason, Daphne says, “Mrs. Collins, Tad is a dear boy, and I’m very fond of him. I do think I’ve gotten to know what he needs.” Which is something, I suppose, although nothing in the text actually supports that idea. We’ve seen Tad twice so far, and he isn’t a dear boy at all; he’s a snoop and a gossip, a spoiled rich brat desperately in need of a peer group.

In fact, I would say that of all the versions of Collins child that we’ve seen, Tad is back of the pack for sure. Jamison was a dear boy, and you could be fond of David in the periods when he wasn’t trying to murder somebody, but ghost Tad was brain-damaged, and live Tad is entirely insufferable. It’s just fat birds, all over the place. 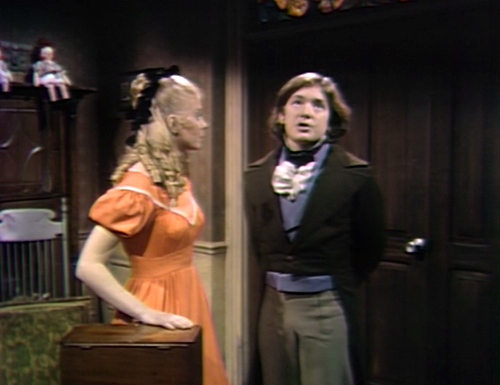 And honestly, this is just a symptom of the larger malaise taking hold of this period of the show. It doesn’t really matter what Tad and Carrie are like, because they don’t really have a storyline; practically nobody does.

Hands up, who knows what Gabriel and Edith’s storyline is right now? Who understands how Desmond fits into anything? Who thinks they know what Leticia is for, or Flora? The show is littered with characters right now who don’t really make much of a difference.

There’s only one story that they care about, which is Gerard setting up Quentin for a witchcraft trial. The witnesses for the prosecution are starting to stack up — Samantha and Gabriel hate Quentin, Daniel is afraid of him, and Trask hates everybody. You can see Gerard moving purposefully through the story, setting that in motion. I don’t have a clue what anyone else is supposed to be doing.

When you think back to 1897, the show was stuffed with plots and subplots; practically everyone was involved with their own personal classic from English literature. Nobody interceded with Oscar, but that was just about the only thing that didn’t happen.

But that was when they had a full staff of writers — Sam Hall, Gordon Russell and Violet Welles — along with producer Bob Costello and executive producer Dan Curtis, all of them building one story idea on top of another. Violet and Bob are long gone now, and Dan’s lost interest, so it’s just Sam and Gordon working at the coal face, somehow typing up five television scripts a week. The strain is really starting to show, at this point, and there’s still about a hundred episodes to go. Maybe we could go fly a kite? It couldn’t hurt, I suppose.

Tomorrow: After This Afternoon.

At the beginning of act 1, in the background of Quentin’s close-up, you can see someone moving behind him.

Carrie tells Tad about her vision of their death: “We look like we did now!”

Lloyd Harris played Dr. Welles, in his only episode. Harris’ only other screen credit is a 1973 episode of Walking Tall. He was on Broadway back in 1932, in a musical revue called “Walk a Little Faster”. He performed in several operas on Broadway in 1946, then returned in a comedy “Mike Downstairs” which lasted three days in 1968, and then “70, Girls, 70” which lasted a month in 1971.

Tomorrow: After This Afternoon.