“It was then that I noticed that we all have a strain of despair.”

“I receive a letter every three days,” says Quentin Collins, “and I receive it at one out of two times.”

I’m going to pause on that line for a second, because Quentin is about to say something ridiculous, and it needs a little room to breathe. He’s explaining to his friend Gerard about the letters that he receives every three days, from a dead woman.

“Either in the afternoon,” he continues, “when I’ve just gone to visit the estate manager, or exactly half an hour after that, when I’ve finished my last walk around the grounds.”

Gerard nods. “Someone knows your habits very well,” he says, so he must comprehend that line a lot better than the rest of us. Those two times are basically indistinguishable to the human eye.

Quentin means half an hour after midnight, of course, which you’ll understand once you see the next scene, where Quentin tries to lay a trap for the letter-leaver at twenty minutes after twelve. Or, if you don’t understand it then, then maybe you will on a third or fourth viewing, for example while you’re writing a blog post about it. That is the kind of attention that Dark Shadows demands. 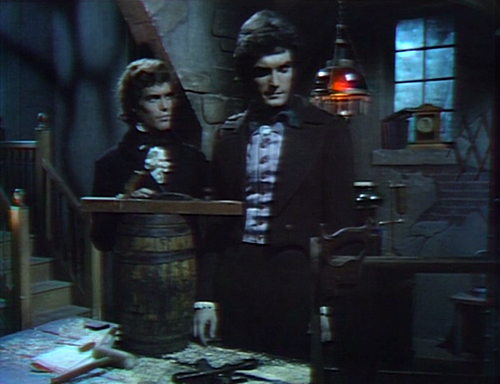 I’m writing about a Quentin and Gerard scene again, because they’re currently the romantic leads of the show, and half the time, I have no idea what they’re talking about. They live in this urgent little bubble of air, two best friends who stand really close to each other and share secrets. They both married the same woman, and they’re both in love with the same governess, and one of them is scheming to murder the other. I am shipping them like crazy right now.

As we’ve observed before, there are three supercouples on Dark Shadows: Barnabas and Julia, Barnabas and Angelique, and Quentin and any other living human being. These are the characters that make the show worth watching, who make any scene better just by interacting with each other. Lately, Quentin has lost some of his lust-worthy luster, mostly by yelling at women, but Gerard has picked up the baton as the handsome, smoldering rake who will probably kill you. So having both Quentin and Gerard in the same room is exciting, and since you can’t understand anything they say, you can fill in your own dialogue in your head, and season to taste.

Lately, they’ve been talking about Quentin’s Staircase in Time and the letters that Quentin receives from ghosts, and then Gerard goes around gossiping with people about whether Quentin is practicing witchcraft. Gerard is utterly obsessed with Quentin, one way or another, and I know exactly how he feels. 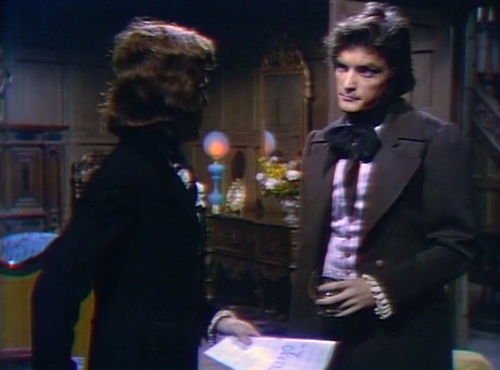 And it’s adorable how tongue-tied they get around each other. Here’s a scene from a couple weeks ago, when Quentin found Gerard playing a song that it seems like maybe Quentin wrote, except that they’ve never mentioned that Quentin wrote music and it doesn’t seem super likely. That’s what happens when Quentin and Gerard get together; the inconsistencies pile up something fierce.

Gerard:  Quentin, you said that you had destroyed a sheet of sheet music?

Gerard:  Surely you must have other copies.

Quentin:  I made exactly two copies. One of them I gave to Joanna, the other I kept myself.

Gerard:  I see. And you destroyed yours, and so — this for, this must be Joanna’s.

(Quentin stares into Gerard’s eyes, and tries to remember his next line.)

(Quentin looks at Gerard again, completely lost. He gestures at the music.)

(That doesn’t make sense, so Gerard looks down at the music. Quentin tries again.)

Quentin:  Who? What is doing this to me?

Gerard:  There must be two reasons.

And he’s right, there must be. One reason wouldn’t be enough to explain what’s going on here, not nearly enough. Two is the minimum. 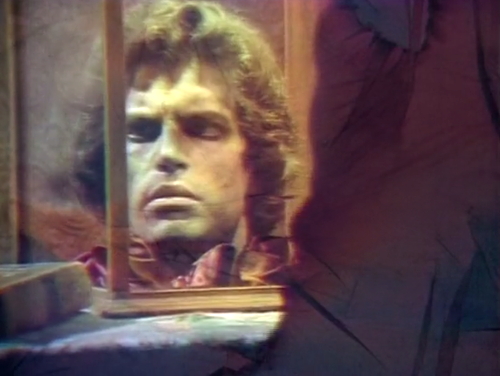 But you never really know what’s going to happen when Gerard opens his mouth; it could be one thing, and then again it could be another. That’s part of his fascination. Here’s a quick saunter through some Gerard moments of the past week.

Gerard:  You must tell me! — what it meant! — my dream! Why were you on the outside of the case? Why? 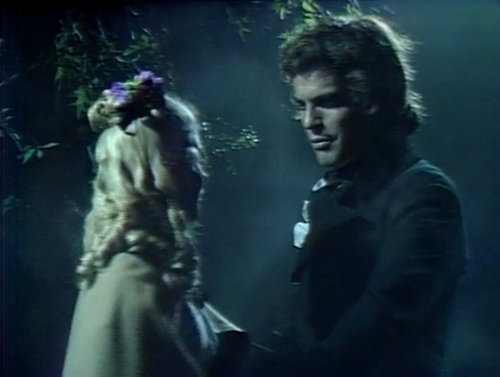 Carrie:  You won’t tell anyone that I followed you? I mean, they might think it was a childish thing to do, I guess.

Gerard:  No, I won’t tell anyone. And we both won’t say anything about what happened here at Widow’s Hill, will we? 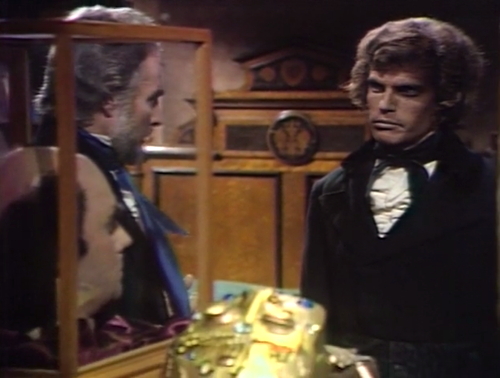 Gerard:  How many are in our coven now?

Dawson:  Only six. We have need to complete the thirteen.

Gerard:  Will I know their names? Will their ancestors follow me, as yours did? 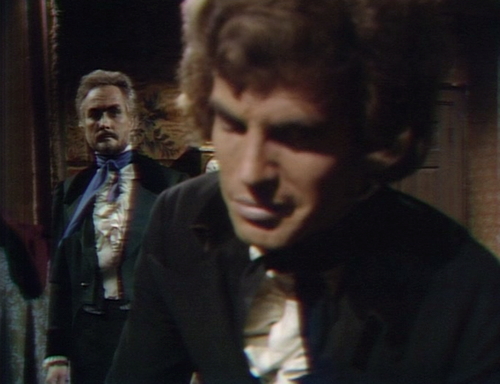 Gerard:  She calls herself Valerie. She still knows me as Gerard Stiles. And it will remain that way… until the golden moment. 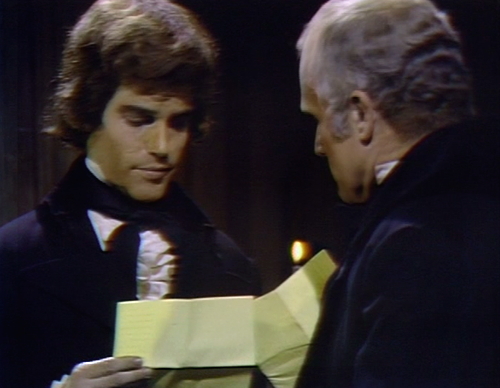 Gerard:  The sum of the substance is that you will live a very long and fruitful life.

Daniel:  Does it really say that?

Gerard:  But — there is one important thing.

Daniel:  And what is that?

Gerard:  That you will, in the future, be very disenchanted with someone very close to you. 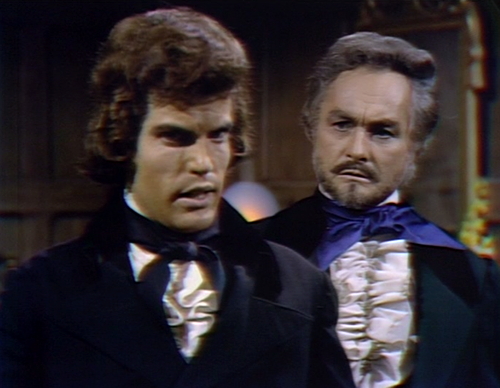 Dawson:  Would you mind telling me why you are so interested in her?

Gerard:  I think her name is Miranda DuVal, the woman who betrayed me in 1692.

Dawson:  But Miranda lived a hundred and fifty years ago!

Gerard:  I have found ways how to survive, Charles. Perhaps she did too. 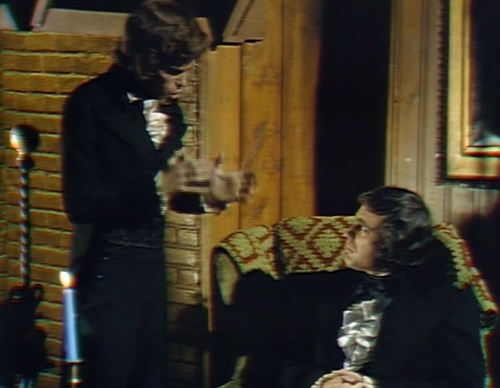 Trask:  Yes, I believe our talk has been fruitful, Gerard, but I still believe we should be moving ahead faster in this matter.

Gerard:  Lamar — we must execute with all extreme caution! 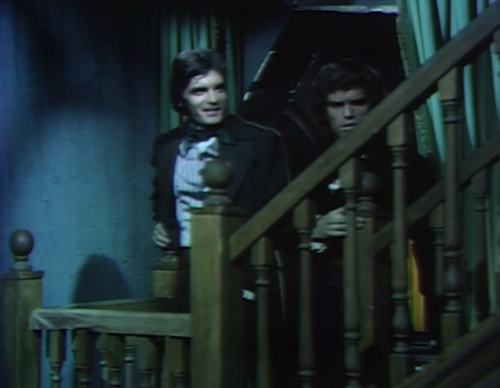 Gerard:  Tell me, Quentin — do you have the theories towards this staircase written down anywhere? 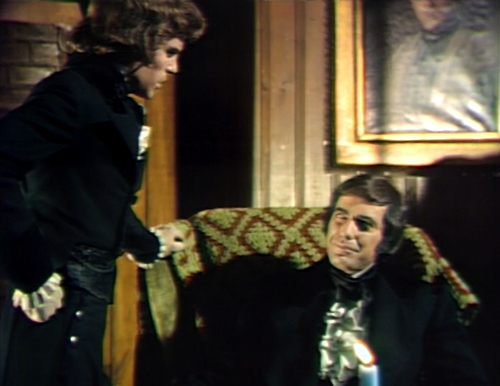 Gerard:  Why did you go to Samantha? I thought you two were at a great difference between each other. 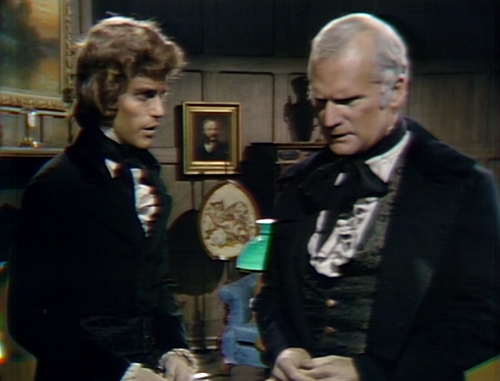 Gerard:  Well, I’m afraid I’m not as impartial as you think.

Daniel:  What do you mean?

Gerard:  I am very best friends with Quentin. 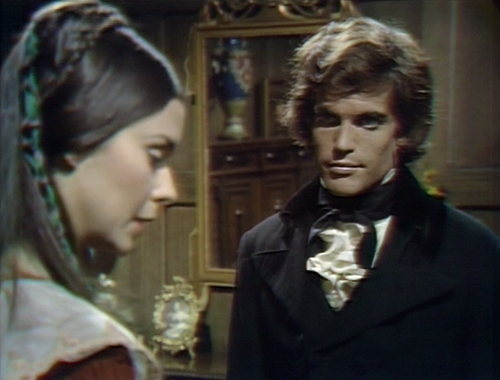 Gerard:  Where are you going?

Daphne:  To my room.

Gerard:  I completely refuse you to. 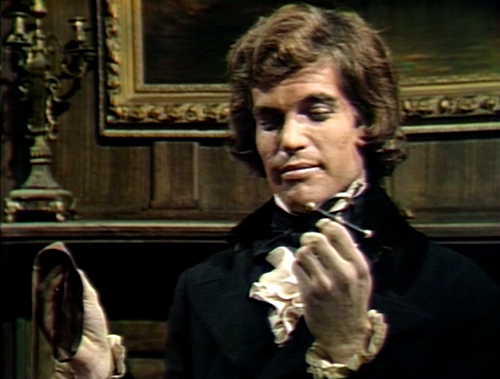 And that’s just this week! Gerard is quickly becoming a serious rival for Barnabas; he’s a dark horse in the 1970 Fridspeak sweepstakes. And he really nails it in today’s episode, because he has a long nonsense spell to recite, which is always good for a couple postcards from the infinite.

Gerard:  D is for Daphne. D is also for the Devil. There is a new world awaiting you, Daphne. Yes, a new world. A world that you will find evil in. Joy, with evil. Yes. Joy with evil that you will find, like an adventurer on the sea, finding an unmarked sea. And those waters will drown. Now, your eyelids are becoming heavy. Daphne, very heavy. You will sleep. For in sleep, you will see what the future is to be… the future that you will share with me.

Downstairs in Quentin’s basement lab, Gerard tells Gabriel to get a doctor for Daniel. Wouldn’t it be more efficient for Gerard to run and find people, since Gabriel’s in a wheelchair? Also, how does he get up and down stairs all the time?

The drawing room scene in act 1 begins with Quentin staring directly into the camera for almost ten seconds. I suppose this is intentional, but it’s unnerving.

Quentin tells Daphne, “You are an angel among gargwells.” He also says that his father murdering his wife is “a well-known secret.”

Edith is wearing a wristwatch when she touches Daniel’s shoulder in act 1. Wristwatches existed in 1840, but weren’t popular until the 20th century.

Quentin asks Gerard if he remembers the letters, and Gerard says, “Yes, Joanne’s.” He means Joanna’s. 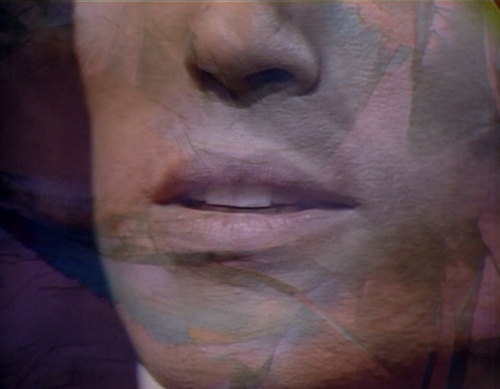