“We cannot succeed without it, because without it he cannot live!”

You know, she’s done amazing things in the past, but now she’s even more in the past, and look what she can do. Displaced medico Julia Hoffman, thrust by circumstance into a time not yet her own, has assembled — in the middle of the night, in the middle of a graveyard, and in the middle of the nineteenth century — a pop-up artisanal mad scientist coworking space with all the trimmings, including assorted glassware lashed into an impromptu apparatus with bubbling liquids of uncertain purpose, along with tables and lamps and switches and samovars and who knows what-all.

She’s even got things wired up with electricity somehow, with a good old-fashioned Jacob’s ladder spark gap buzzing away in the corner, in case the Nobel committee comes by and she needs to science the place up a little.

She’s in a secret underground crypt, by the way, built by ignorant and superstitious villagers a hundred and fifty years ago as a long-term radioactive-waste storage facility, so they would have a place to put decapitated wizards that they weren’t using anymore. It wasn’t zoned for whatever the hell this is, so Julia’s technically a squatter, and she couldn’t hire anybody to help her drag the enormous Frankenstein-size slab through the narrow trap door beneath the unmarked grave, and down the winding stairs to this busted basement. And yet she did it somehow, in absolute silence and secrecy, all on her own. It’s incredible what you can do, when someone else puts your mind to it. 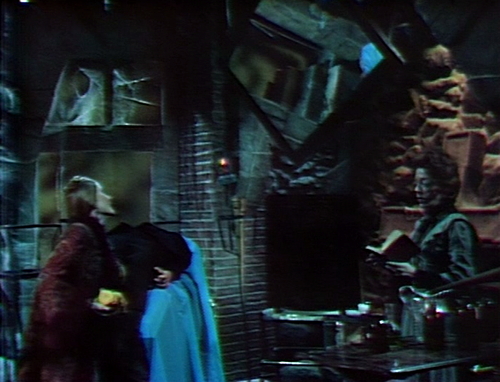 “Look at all the work you’ve done!” says Leticia the lab assistant, who went downtown to pick up a few things. “And in such a short time, too!” I guess that’s a lampshade moment, where they acknowledge the impossibility of what we’re looking at, and then hang a lampshade over it in the hopes that we’ll forget about it, which I haven’t and don’t think I ever will. Then Leticia looks up and observes the enormous full-length mirror suspended over the operating theater, and asks, “What’s the mirror for?”

“Oh, it reflects more light,” says the doctor, because she conjures up elaborate pulley systems all the time, and it’s not that big of a deal. This is Julia Hoffman, the modern Prometheus, who’s stolen fire from the gods so often that they don’t even bother to ask for it back anymore. She was building Frankensteins on the regular all the way through 1968.

So it’s a lucky break for the legendary head of the warlock Judah Zachery, who’s the fellow in the glass case on the credenza. He wants to reunite with the rest of his body, which is now waiting patiently on the operating table. If Julia hadn’t come along by happenstance and gotten herself hypnotized into helping, then the L.H. of J.Z. would have had to find somebody else who’d spent the last several years participating in mash-up pastiches of two-thirds of the Universal Monsters films, and it would be ages before Abbott and Costello were even born.

“You’re a sorceress, that’s what you are, a sorceress!” Leticia gushes in admiration. “You could make a fortune in the music halls, you know that?” Leticia is a cockney stage performer with actual psychic powers, which is another one of those outre elements that makes watching Dark Shadows such an aerobic activity.

“Where are the medical instruments?” asks Julia.

“Oh, now, I meant to tell you about that,” Leticia coos. “There’s a very nice young man who’s going to bring them to Rose Cottage. There’s no need to worry, though, because he won’t ask any questions. I made sure of that.”

“Well, I gave him my nicest smile, and said I was Dr. Collins’ assistant,” Leticia giggles. “And I said that if he ever got sick, I’d take good care of him, you know what I mean?”

But Julia has no time for twinkling eccentrics. “You’ve got to go immediately, and bring those surgical instruments,” she says. “And hurry back, because I’ve got to go to Collinwood, before Barnabas starts wondering about where I am.” And the audience says, wait, you’ve done all of this before Barnabas even noticed you were out for the evening? 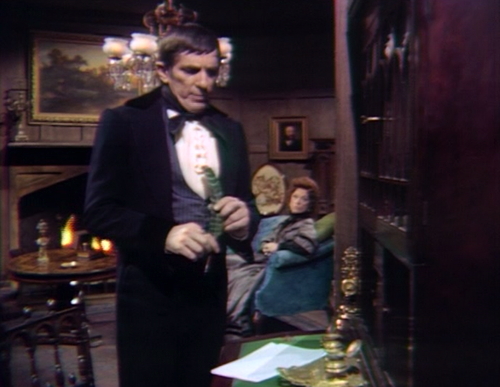 And thank goodness we have Julia right now, bending time and space by moonlight, because she and Gerard are the only two characters who can actually get anything done. Everybody else in this storyline spends their time writing and receiving correspondence, or jotting things down in other people’s handwriting, or taking forever to decide that they don’t want to be married anymore.

There was a plotline about an inheritance in there somewhere, but the dying old man just gradually stopped dying, did anyone else notice that? They made a big deal about how mad old Daniel needed to be locked up in the attic for his own safety, but then they started allowing him to go downstairs on special occasions, and now he just walks in and out of the drawing room on his own recognizance, any time he likes. I remember the days when a dying old relation would actually go ahead and die, so we could play hide-and-seek with the forged will for a few days, and then wrap up that plot point and move on. There’s too much leisure time in this storyline; I want people to show up for work once in a while, and murder somebody.

So that’s why we need characters like Gerard and Julia, impostors who know what they want and take action to get it, even if they’ve been hypnotized by malefactors. Julia’s actually more effective as Judah Zachery’s personal physician than she was as an undercover time cop, so she can keep going like this for as long as she likes.

At least, she can if it means she can also take a break once in a while for a diva battle with an arch enemy. The similarly situated sorceress Angelique — out of time, and under a false name — has insinuated herself into society on the great estate by telling everyone that she’s Barnabas Collins’ wife, which she technically is, although the statute of limitations may have run out after they were both killed several times over the last several centuries.

Finding that Julia is also purporting a family relationship with Barnabas, Angelique is determined to discover who this interloper really is, even if she has to spring a pop quiz on her in an easily eavesdroppable location like the Collinwood foyer.

Angelique:  I was wondering, Julia — you don’t mind if I call you Julia, do you?

Angelique:  Is it possible that we could have met before the other evening?

Angelique:  Well, because I had the feeling that you knew who I was, before Barnabas said my name. That perhaps we had met somewhere, in some other time.

Julia:  Barnabas had told me about you.

Angelique:  Really? How much has he told you about me?

Julia:  I’m afraid I don’t really remember, it’s all so long ago.

So that’s professional level mendacity, delivered with the chilled-steel confidence of someone who’s been lying nonstop since a hundred and twenty-seven years from now. And she does this while hypnotized, backwards and in high heels. It’s unreal.

Angelique:  Oh, yes, it’s been ten years since you’ve seen each other, hasn’t it? What a marvelous story. Don’t look offended, dear sister-in-law. I simply wanted you to know that I know you are no more Barnabas’ sister than I am. The intriguing question is, who are you — and what are you to him?

Julia:  I am devoted to him. You may interpret that any way you like.

And then she turns around and does the same thing in the other direction, literally twenty seconds later.

Julia’s got to leave the house again with her medical bag, to scurry back to her monstrous crimes against God and nature. I have to give this conversation to you in full as well, just to highlight how many easily falsifiable statements Julia can say in succession, without breaking a sweat.

Barnabas:  You’re not leaving the house, are you?

Barnabas:  Where are you going?

Julia:  I’m going to Rose Cottage, I promised Flora I’d stop by and get a copy of her new book.

Barnabas:  With your medical bag?

Julia:  I thought I’d stop and see Roxanne on the way. Perhaps I can do something.

Barnabas:  Oh, that’s a good idea. She should be recovered by now, but come back and tell me if she isn’t.

Julia:  No, I don’t think that’s a good idea. If Angelique saw us, she would misunderstand.

Barnabas:  But you cannot go out there at this hour!

Julia:  Well, I’ll stop at the servants’ quarters, and get one of them to go with me.

Barnabas:  Very well, but make sure he stays with you!

So that’s at least three people — Flora, Roxanne, and basically any servant — who will not be able to corroborate Julia’s story later, and she is entirely unbothered. Julia brings dead people back to life with lightning.

So this is what we’ll miss, when it’s gone, this triple agent and all-purpose plot driver who can do anything she wants. The overall story structure is a fractured mess right now, with at least a half-dozen main characters who have absolutely no connection to any relevant story thread — Daniel, Edith, Flora, Desmond, Tad and Carrie, if you’re wondering — as the real action is being directed by a decapitated head in a glass box.

But we still have Julia Hoffman, redecorating, anachronizing and scattering lies in all directions. The experiment fails in this episode, but only in a dream; the real Julia is actually going to pull off this nonsensical achievement sometime next week.

“There’s going to be an electrical storm tonight,” she tells her assistant. “We must use the lightning.” She’s going to save this show, if she can, or go down swinging.

Monday: Waiting for the Storm.

In act 1, Angelique tells Barnabas, “I want… what I know that I will get.” Barnabas asks if he can talk to Roxanne, and Angelique laughs, “I’ve known you a long time, Barnabas. You’ve double-crossed me more than once.” Then her eyes flick to the teleprompter, and she adds, “Betrayed me.”

When Angelique picks up the quill pen, someone’s shadow passes by behind her.

When Leticia asks what the mirror in the crypt is for, you can see one of the stage lights.

I cleaned up this quote above, but Julia actually says, “And hurry back, because I’ve got to go to Collinwood, because before Barnabas starts wondering about where I am.”

When Barnabas walks across the drawing room to pick up the quill pen, a boom mic is visible overhead.

When Angelique asks Julia if they’d met before, Julia starts to say a line too early, and gets cut off.

Monday: Waiting for the Storm. 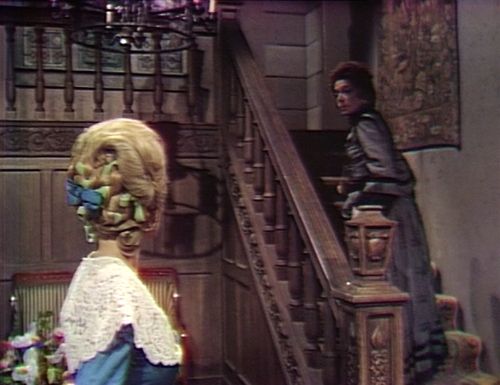